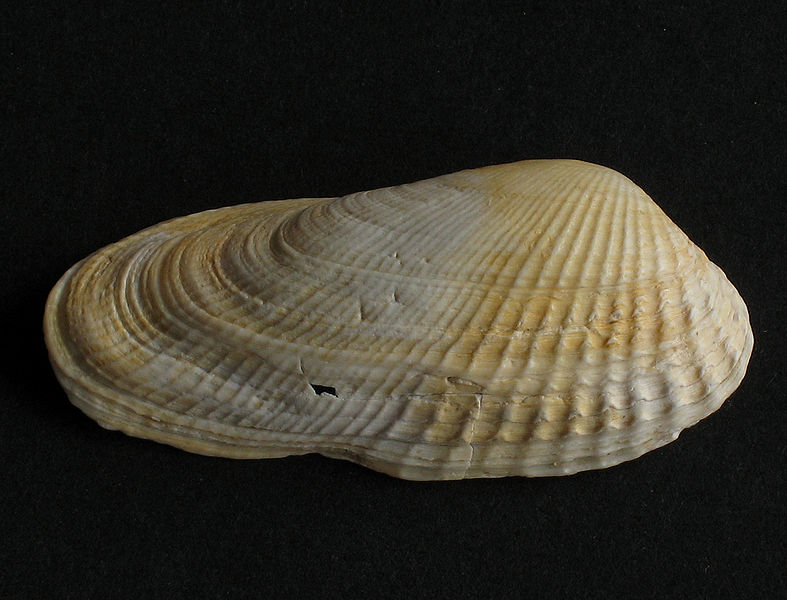 Petricolaria pholadiformis is commonly known as the False Angelwing and the American Piddock. It is native to the Northwest Atlantic from Chaleur Bay, Canada to Florida and Texas. Introduced populations are known from Europe and the Western Coast of North America (California - British Columbia). The most likely vectors for the introduction of this species are accidental transport with the Eastern Oyster (Crassostrea virginica) and ballast water discharge. This species is primarily found burrowing in mud, peat, stiff clay, or soft rock. Adults live completely buried in the substrate, feeding and breathing through their two siphons. There are no or few reported impacts of this species in its introduced range.

Petricolaria pholadiformis is native to the Northwest Atlantic from Chaleur Bay (Quebec-New Brunswick) to Florida and Texas (Bousfield 1960; Abbott 1974). Reports from Uruguay and west Africa are based on confusion with other species (Coan 1997). It burrows in peat, clay, and mud from the mid-intertidal to ~30 m deep, but usually in shallow water at 20-35 PSU (Wass 1972; Castagna and Chanley 1973; Morris 1975; Coan 1997). This clam was introduced to San Francisco Bay in 1927, and was found later in Newport Bay, California (CA); Willapa Bay, Washington (WA); and Boundary Bay, British Columbia (BC) (Carlton 1979; Coan 1997; Gillespie 2007). It has also been introduced to Europe and was introduced to British waters with transplants of Eastern Oysters (Crassostrea virginica) by 1890, and has spread to Germany, Denmark, Norway, and Sweden (Hopkins 2001; Swedish Environmental Protection Agency 2006). In 1994, it was collected in Greek waters, in the Aegean Sea, and is now established there (Zenetos et al. 2009).

Petricolaria pholadiformis was first found in West Coast waters near Redwood City, California (CA) on South San Francisco Bay in 1927. Populations were reported to be rare and patchy (James Carlton, personal communication, cited by Coan 1997). Dead shells were collected in Lake Merritt, Oakland in 1935 (Carlton 1979). A small population of this bivalve was found ‘in one small area’ in upper Newport Bay, CA in 1972 (Carlton 1979). This population appeared to be extinct, according to Coan (1997). Its present establishment in San Francisco Bay is uncertain (Coan and Valentich-Scott, in Carlton 2007). Petricolaria pholadiformis was found in Willapa Bay, Washington (WA) in 1943 (Eyerdam 1943, cited by Carlton 1979). The False Angelwing is still established and abundant here (Coan 1997; Cohen et al. 2001). A small, established population also occurs in Boundary Bay, British Columbia (Gillespie et al. 1999; Gillespie et al. 2007). Plantings of Eastern Oysters (Crassostrea virginica) is the most likely vector for the introduction of P. pholadiformis to the West Coast, although ballast water is a possible mode of introduction to San Francisco Bay, given its late (1927) appearance there (Carlton 1979; Cohen and Carlton 1995).

Petricolaria pholadiformis was first collected in Europe in 1890, in the Crouch River Estuary, England, where it was introduced with transplanted Eastern Oysters (Eno et al. 1997). It is present along the southern and eastern coasts of England, with isolated records from Wales and Cornwall (MarLin 2012). It spread rapidly through the North Sea, reaching Belgium by 1899 (Kerckhof et al. 2007), and the west coast of Denmark by 1905 (Jensen and Knudsen 2005). On the east coast of Denmark, the False Angelwing was found in the Kattegat by 1931 and the Belt Sea by 1943 (Jensen and Knudsen 2005). To the north, it colonized the Skagerrak coast of Norway and Sweden by 1955 (Hopkins 2001; Swedish Environmental Protection Agency 2006). A surprising disjunct introduction was discovered in 1994, when P. pholadiformis was found in Evoikos Gulf, Greece, on the Aegean Sea (Zenetos et al. 2003), and later (2007) in the Saronikos Gulf, where it appears to be established. Greek populations are likely to be ballast water introductions (Zenetos et al. 2009).

Petricolaria pholadiformis is a bivalve with an elongated, cylindrical/elliptical shaped shell. The umbo is near the anterior end of the shell, and the posterior is narrowed, with the valves slightly gaping. The shell is chalky-white, and rather fragile, with numerous ribs radiating from the umbo. The 10 anterior-most ribs are larger, with prominent scales. The shell is also marked by concentric growth lines. The umbo is elevated, with a well-defined lunule. The cardinal hinge teeth are long and pointed, with three in the left valve, and two in the right valve. The ligament is external and located just posterior to the beaks. The siphons are separate from each other, almost to their bases, and are large, tubular, and translucent-gray. Adult shells reach ~55 mm. This bivalve bores into peat, mud, stiff clay, or soft rock such as limestone. The larvae are planktotrophic and settle at about 165 to 185 µm (Chanley and Andrews 1971). Description from: Bousfield 1960; Abbott 1974; Morris 1975; Coan et al. 2000.

Petricolaria pholadiformis is a bivalve with separate sexes. Males and females release eggs and sperm freely into the water column. Females in Long Island Sound became gravid at sizes larger than 27 mm. An average female produces ~325,000 eggs (Brousseau 1981). Fertilized eggs develop into trochophore larvae, and then planktonic veligers, which settle at about 165 to 185 µm (Chanley and Andrews 1971).

Petricolaria pholadiformis burrows in mud, peat, stiff clay, or soft rock. The adults live completely buried in the substrate, feeding and breathing through their two siphons. As they grow, they burrow deeper into the sediment (Abbott 1974; Gosner 1978). It is common at salinities of 20-35 PSU, but can tolerate salinities as low as 7.5-10 PSU for brief periods (Wass 1972; Castagna and Chanley 1973). This bivalve often occurs where salinity is somewhat reduced (Zenetos et al. 2009). Adults are filter-feeders, ingesting phytoplankton and other particles through their long siphons. Their burrowing habits reduce the risk of predation, but when exposed by a predator, or by erosion, their fragile shells make them vulnerable.

Petricolaria pholadiformis appears to have few or no impacts on the West Coast (Cohen and Carlton 1995; Coan 1997) and in most European waters. At one time, it was reported to have replaced the native Barnea candida (White Piddock) in Belgian waters (ICES 1972, cited by Eno et al. 1997; Swedish Environmental Protection Agency 2006), but B. candida is now abundant in Belgium, while P. pholadiformis is rare. Petricolaria pholadiformis is also rare in Danish, German, Norwegian, and Swedish waters (Jensen 2010).

Wolff, W. J. (1973) The estuary as a habitat: An analysis of data on the soft-bottom macrofauna of the estuarine area of the rivers Rhine, Meuse, and Scheldt, Zoologische Verhandelingen 126: 4-242