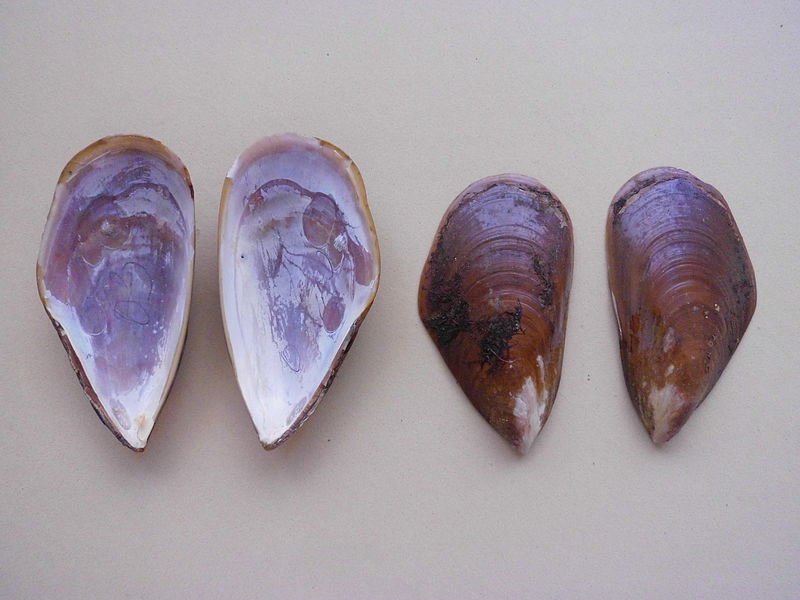 Perna perna is commonly known as the Brown Mussel or the Mexilhao Mussel. It is native to the western Indian Ocean and the west coast of Africa. It has been introduced to the Gulf of Mexico, the Atlantic coast of South America, and New Zealand. It is reported throughout the Mediterranean region, but we consider it cryptogenic here and in northern West Africa. Larvae of P. perna settle and metamorphose on a wide variety of surfaces, including rock, wood, and vegetation. They are attracted to settling near conspecifics and can create extensive beds on rocky surfaces, but also on soft sediments, creating complex habitat. This species is an important human and wildlife food resource and a major ecosystem engineer in both its native and introduced ranges.

Perna perna is native to the western Indian Ocean (from the Bay of Bengal and the Red Sea to the tip of South Africa), and to the west coast of Africa at least as far north as the Congo (Siddall 1980; Rajagopal et al. 1997; Academy of Natural Sciences of Philadelphia 2006). On the west coast of South Africa, it is present in archaeological sites over 10,000 years old (Souza et al. 2003). However, later C14 analysis indicates that it was present at archaeological sites ~700-800 years old, predating European colonization. DNA analysis indicates that Brazilian and South African populations diverged ~200,000 years BP (Pierri et al. 2016). It currently occurs in Morocco and into the Mediterranean as far as Sicily and Tunisia (Buccheri and Palisano 1976; Siddall 1980). It was present on the African Coast of the Mediterranean by the late 1800s, but has been sporadic in Barcelona, Spain; Toulon, France; and the Gulf of Palermo, Sicily in the 20th century (Buccheri and Palisano 1976). Occhipinti Ambrogi (2002) listed it (as P. picta) as an introduction to Italy, but we treat it as cryptogenic on the coast of northern West Africa and in the Mediterranean Sea. Its range may have been extended by shipping in earlier centuries. In 2011, P. perna was discovered in intertidal mussel communities at two locations on the southern coast of Portugal, away from major commercial ports (Lourenco et al. 2012). The authors consider this range extension to be the result of natural dispersal and climate change, although dispersal by fishing or recreational vessels is also possible. Fossil records are known from southern Portugal during the Atlantic Warm Period (circa 8000-5000 BP) and the Medieval Warm Period (circa 1000-1200 AD)(Callapez et al. 2012).

Genetic comparisons of Indo-Pacific, South African, Mediterranean and South American populations indicate that two clades of mussel originated in the Indo-Pacific, one (Clade 1) colonizing West Africa and the Mediterranean, and the other (Clade 2) colonizing the Atlantic coast of South Africa. The Brazilian populations belong to Clade 1. The genetic divergence between Brazilian and West African Clade 1 populations favor an early, natural colonization of Brazil (~10,000 years BP), but do not rule out a later (~500 year BP) introduction, which is supported by paleontological and archaeological evidence (Cunha et al. 2014; de Oliveira et al. 2017). Perna perna was reported to be absent in pre-Columbian shell middens in Brazil, and was likely introduced between the 16th and 19th centuries with the African slave trade (Souza et al. 2003; de Oliveira et al. 2017). There is a contradictory study that suggests that it was present at archaeological sites ~700-800 years old, based on C14 analysis, predating European colonization, and that Brazilian and South African populations diverged ~200,000 years BP (Pierri et al. 2016). It currently occurs from Uruguay (and possibly Argentina) north to Bahia, Brazil, but is absent in northeastern Brazil (except for a recent occurrence at an offshore terminal). A disjunct occurrence through Venezuela and the southern Caribbean probably results from a separate introduction (Siddall 1980; Silveira et al. 2006; Perez et al. 2007; Carranza and Borthagaray 2009; Cunha et al. 2014). High water temperatures may have prevented colonization in northeastern Brazil, but upwelling and cooler water may have permitted establishment in northeastern Venezuela (de Oliveira et al. 2017). These populations are Clade 2, presumably originating in South Africa (Cunha et al. 2014). In 1990, P. perna was discovered in Port Aransas Pass, Texas (Hicks and Tunnell 1995); however, P. perna has not been seen in the Gulf of Mexico since ~2000 (David Hicks, 3/2/2017).

Perna perna was long regarded as native to the tropical Western Atlantic, but its absence in early shellfish middens in Brazil strongly suggests that it was introduced to the Western Hemisphere, possibly with the African slave trade in the 1500s-early 1800s (Souza et al. 2003). It is now a dominant animal in lower rocky intertidal regions (Souza et al. 2003). It was still expanding its range southward in the 20th century, and was first recorded in Uruguay in the 1950s (Carranza and Borthagaray 2009). Its southward limits are unclear – there are several undated museum specimens from Argentina, one as far south as Tierra de Fuego (Florida Museum of Natural History 2011). However, this species' limited low-temperature tolerance probably would exclude it from cold-temperate regions (Hicks and McMahon 2002) In northeastern Brazil, it was absent north of the state of Espirito Santo, but in 2004 it was recorded from an offshore ship terminal 14 km from the coast of Rio Grande de Norte state, Brazil (Silveira et al. 2006). It is established in Venezuela, again probably since the time of the African slave trade (Perez et al. 2007), but is rapidly being replaced there by P. viridis (Segnini de Bravo et al. 1998). Perna perna, formerly identified as Perna indica, has a limited range in southern India and Sri Lanka. A genetic analysis indicates that P. perna was introduced to southern India from the Gulf of Oman 100+ years ago (Gardner et al. 2016).

A population of P. perna was accidentally introduced to Tasman Bay, New Zealand, when fouling organisms were cleaned from an oil-drilling rig in 2007. The mussels were dredged from the soft bottom and apparently eradicated. Mathematical models predicted that more than 90% of the mussels and other fouling organisms were removed, and that successful reproduction of any remaining organisms would be unlikely (Hopkins et al. 2011).

Shells of Perna perna are roughly oval in the ventral region, but taper to a triangular shape in the dorsal half, with an apex at the hinge and an obtuse angle at the anterior edge, where the shape changes from triangular to oval. The shell is broader in the anterior-posterior direction than that of P. viridis or P. canalicula, and the ventral margin is straight, rather than concave (P. viridis) or convex (P. canalicula). The anterior retractor muscle leaves a 3-part scar in Perna, as compared to a continuous, elongated scar in Mytilus. In live animals, P. perna has more pronounced papillae along the mantle margin than P. viridis. Adults are typically brown to reddish-maroon, with irregular areas of light brown and green. In adults, abrasion removes the periostracum, leaving white or pink patches. (Description from: Siddall 1980; Hicks and Tunnell 1993; Rajagopal et al. 2006)

The Brown Mussel (Perna perna) has separate sexes and individuals mature at one-year of age or less. This species has a prolonged spawning season, and in some tropical regions, spawns year round (Hicks and McMahon 2002). Fertilized eggs develop into a planktonic trochophore larva, then into a shelled veliger. The larvae settle at ~230 μm (Siddall 1980), and become mature at a shell length of ~22 mm (Shafee 1989).

Larvae of P. perna can settle and metamorphose on a wide variety of surfaces, including rock, wood and vegetation. However, unlike Mytilus spp., Perna perna does not regularly shift from algae to rocks as it grows – many of the P. perna settling on seaweeds die when the plants die (Erlandsson et al. 2008, South Africa). As they grow, they are attracted to other mussels. Extensive beds develop on rocky surfaces, but also on soft sediments, in which mussels are connected to each other and the substrate by byssus threads, creating a complex habitat (Robinson et al. 2007). Mussels are strong-filter feeders, and create substantial currents as they pump in water to ingest phytoplankton and other suspended material. They deposit the uneaten material as pseudofeces, creating deposits of silt around and within the mussel bed (Bertness 1999; Buschbaum et al. 2009).

Brown Mussels are characteristic of shallow subtidal and lower intertidal zones, and can be subject to sharp changes in temperature when exposed to the air, and changes in salinity due to rainfall and river flow. Adult P. perna can tolerate salinities of 15-50 PSU (Hicks et al. 2000), but the salinity range for successful larval development is narrower (25-35 PSU, Romero and Moreira 1980). Perna perna's temperature range in water is 7.5 to 31.5°C (Hicks and McMahon 2002). Its degree of tolerance to air exposure is limited, and best at lower temperatures (250 hour survival at 15ºC and 95% humidity compared with 24-80 h at 25 and 30ºC, and 5-95% humidity). This is comparable to other mytilids of lower intertidal and subtidal zones (Hicks and McMahon 2002).

Perna perna is an important human and wildlife food resource and a major ecosystem engineer both in its native and introduced ranges. It has been best studied in its native South Africa, and Brazil where it was a very early introduction (Souza et al. 2003; Robinson et al. 2007). It is known as a fouler on ships (Woods Hole Oceanographic Institution 1951), and can create heavy fouling on navigational buoys, causing them to sink (Hicks and Tunnell 1995).

Competition- In southern Brazil, P. perna is believed to have largely replaced the native pearl oyster (Pinctada imbricata) in the lower intertidal zone – the oyster was the dominant form in pre-Columbian shellfish middens (Souza et al. 2003). In the 1990s, a Caribbean pearl oyster (Isognomon bicolor) invaded the mid-intertidal zone, but overlaps to some degree with P. perna in the lower intertidal (Ferreira et al. 2009; Lopez et al. 2010). In Uruguay, P. perna coexists with a smaller native mussel (Brachidontes rodriguezii), which is numerically dominant at most sites, but P. perna forms a significant part of the biomass. At one lower intertidal site, with intermediate exposure, P. perna outnumbered B. rodriguezii (Carranza and Borthagaray 2009). In Texas waters, P. perna is colonizing artificial jetties with a native community of algae, anemones, barnacles, and smaller mussels (Brachidontes exustus, Scorched Mussel) (Hicks and Tunnell 1995), but impacts on local biota have not been reported.

Food/Prey- In intertidal regions of southern Brazil, the introduced P. perna is a major prey item for the native whelks (Lopez et al. 2010), and is probably a significant food resource for crabs, fishes, birds, and mammals.

Habitat Change- Intertidal mussels are significant ecosystem engineers, creating a structure of shells bound to the rocks and each other with byssal threads, creating surfaces for attachment by other organisms and heterogeneity for mobile organisms. On unstructured bottoms, mussel beds provide solid substrate where it was previously absent (Bertness et al. 1999; Buschbaum et al. 2009). Beds of Perna perna provide sheltered habitat for a variety of epifauna, particularly amphipods, at both an exposed rocky and a sheltered sandy site near Santos, Brazil. In the sheltered site, sediment accumulated providing habitat for infauna species, particularly polychaetes (Jacobi 1987). On Texas jetties, P. perna is creating extensive-multilayered beds (Hicks and Tunnell 1995), but impacts on native biota have not been reported.

1999 Nonindigenous species in the Gulf of Mexico. <missing description>

Souza, Rosa Cristina Correa Luz ; Fernandez, Flavio da Costa; da Silva, Edson Perreira (2003) A study on the occurrence of the brown mussel Perna perna on the sambaquis of the Brazilian coast., International Council for Exploration of the Marine Science Symposium 13: 3-24