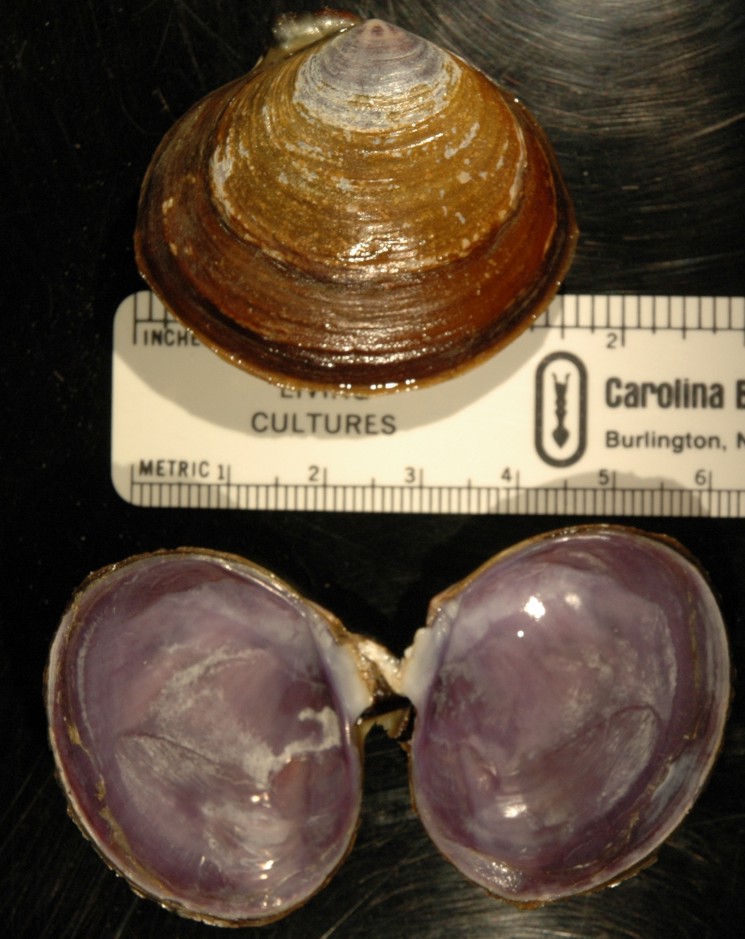 Nuttallia obscurata is commonly known as the Purple Varnish Clam or the Purple Mahogany Clam. It is native to the Northwest Pacific from Russia, Japan and China. In 1991, it was discovered in Blaine, Washington, at the Washington-British Columbia border. It is thought to have been introduced as larvae in ballast water from vessels entering the nearby Port of Vancouver. It has extended its range north into the Strait of Georgia and south into Puget Sound, Willapa Bay, and Coos Bay, Oregon. It is a burrowing bivalve found in sand, gravel, and mud, often in the upper intertidal. It prefers estuaries and other areas affected by freshwater inflow. Since its introduction, it has spread rapidly and developed high densities in much of its introduced range.

The native range of Nuttallia obscurata extends from Guangdong Province, China and the South China Sea, north to Klyuchi Lake, Russia on the northern Sea of Japan (44°48'N) (Roth 1978; Huang 2001; Kolpakov and Kolpakov 2005). On the Pacific coast of Japan, it occurs at least as far north as Mutsu Bay, at the northern tip of Honshu (Roth 1978). This bivalve shows a preference for estuaries and sites near freshwater seeps (Gillespie et al. 1999; Kolpakov and Kolpakov 2005). In 1991, this clam was discovered in Blaine, Washington, at the Washington-British Columbia border. It has extended its range north into the Strait of Georgia and south into Puget Sound, Willapa Bay, and as far as Coos Bay, Oregon (Mills 2002; Dudas and Dower 2006).

The first record of N. obscurata in North American waters was from Semiahmoo Bay, Blaine, Washington (WA) in 1991, on the US-Canada border (Forsyth 1993, cited by Dudas 2005; USGS Nonindigenous Aquatic Species Program 2007). It is presumed to have been introduced as larvae in ballast water from ships entering the nearby Port of Vancouver. By 1998, this clam had dispersed through much of the southern Strait of Georgia and Strait of Juan de Fuca, including the San Juan Islands (1993), Discovery and Sequim Bays (1993), Padilla Bay (1996), and Clallam and Neah Bays, on the Olympic Peninsula (Mills 1998-2004). In Puget Sound, N. obscurata was first found in 1998 in Port Ludlow at the mouth of the Hood Canal (Cohen et al. 1998; Mills et al. 1998). It is now widespread in the Sound (Eissinger 2009). To the north, it has spread up the Strait of Georgia as far as Smith Sound, on mainland British Columbia, north of Vancouver Island (51° 17.07’ N), and up the entire Pacific coast of Vancouver Island (Dudas and Dower 2006; Gillespie 2007; Gillespie et al. 2007). To the south, N. obscurata was collected in Willapa Bay, WA in 2002 (Mills 1998-2004) and in estuaries along the coast from the mouth of the Columbia River south to Coos Bay, Oregon in 2003 (Mills 1998-2004; Sytsma et al. 2004; USGS Nonindigenous Aquatic Species Program 2007). We do not know if the Varnish Clam has spread further south. One record, from Elkhorn Slough, California (Wasson et al. 2005), was of a single shell and could have been from discarded bait or seafood, or a misidentification of N. nuttalli (Kerstin Wasson, personal communication).

Nuttallia obscurata is a bivalve with an oval shell and an umbo which is located slightly to the anterior of the midpoint of the shell. The anterior and posterior ends of the shell are about equally rounded, and the two valves are about equally deep. The pallial sinus does not extend anteriorly to the beak. The hinge ligament is broad, nearly straight, and slopes at an angle to the shell. The shell is marked with concentric ridges. The exterior of the shell is covered with a dark brown periostracum, which is worn through in places, exposing the white shell. The interior of the shell is pearly in texture and deep purple. Adults are 16-65 mm in length (Roth 1978; Mills 2001; Meacham 2002; Coan et al. 2000; Coan and Valentich-Scott 2007; Eissinger 2009). Larval development was summarized by Dudas et al. (2006), but without illustrations. Larvae settle at about 180-200 µm (Dudas et al. 2006).

Nuttallia obscurata is a burrowing bivalve, found in sand, gravel, and mud, often in the upper intertidal and in areas affected by freshwater inflows. In British Columbia, these clams occurred on beaches from the low-water tide line to the lower-high tidal zone (1.1-3.0 m above chart datum), with peak abundances at 1.66 m (Gillespie et al. 1999). A similar pattern was observed in the San Juan Islands, with clams occurring at 1.0 - 2.0 m, and peaking at 1.6. Predation by crabs, primarily Cancer productus, appeared to limit occurrence in low-tide and subtidal zones (Byers 2005). Varnish Clams burrow 7 to 30 cm deep in the substrate (Gillespie et al. 1999). However, N. obscurata does occur in shallow (0.2-1.5 m depth) subtidal habitats in Russian Pacific estuaries. In Klyuchi Lake, Russia, this clam occurred at 8-22 PSU (Kolpakov and Kolpakov 2005), but this clam is common at more marine salinities (30-35 PSU) (Gillespie et al. 1999; Mills et al. 2004; Gillespie et al. 2007).

Nuttallia obscurata is capable both of filter-feeding on phytoplankton and deposit-feeding on organic material in the sediment (Gillespie et al. 1999; Meacham 2004). In the laboratory, N. obscurata extends its siphons and filter-feeds at night and deposit-feeds in the sediment by day (Meacham 2004), a pattern which could reduce the risk of being preyed upon by visual predators. Predators include crabs (Cancer productus and Metacarcinus magister), diving ducks [Melanitta perspicillata (Surf Scoter) and M. fusca (White-Winged Scoter)], and shorebirds [Black Oystercatchers (Haematopus bachmanni), gulls, and crows] (Gillespie et al. 1999).

Nuttallia obscurata has spread rapidly in the Pacific Northwest, since its first collection in 1991, and developed high densities in much of its range. Its economic and ecological impacts may still be expanding with its range and population growth (Gillespie et al. 1999; Meacham 2004; Carswell et al. 2006).

Fisheries- Recreational fisheries for Purple Varnish Clams have developed from British Columbia to Oregon, and some commercial fishing occurs in British Columbia, mostly as bycatch from the Manila Clam/Japanese Littleneck (Venerupis philippinarum) fishery. Young Japanese Littleneck clams are farmed by directly seeding shores and protecting them from predators by plastic netting. Varnish Clams are taken incidentally during harvesting (Carswell et al. 2006), and are marketed in Canada as 'Savoury Clams'. In US waters, N. obscurata is harvested by recreational clammers. In general, Purple Varnish Clams appear to be well-regarded for their size and flavor (Meacham 2004, numerous websites).

Health- In the Pacific Northwest, red tides and other toxic algae are a major concern for wild and cultured bivalves. The harvested species are monitored by government agencies for toxins causing several types of shellfish poisoning, and sections of shoreline are closed to harvesting when toxins are detected. Nuttallia obscurata may retain toxins at different times of year from other clams, since as a deposit feeder it can ingest dinoflagellate cysts in the sediment, between red tides, and may require testing year-round (Gillespie et al. 1999; Meacham 2004). Because this clam often occurs in estuaries and freshwater seeps, it may be at greater risk than other clams of accumulating toxins such as metals and pesticides from rivers and groundwater (Gillespie et al. 1999; Meacham 2004).

Nuttallia obscurata overlaps to some extent with native and other exotic clams Mya arenaria (Softshell Clam) and Venerupis philippinarum (Japanese Littlenecks, Manila Clams), but because of its deposit-feeding capabilities, resistance to desiccation, and deeper-burrowing habits, it ranges higher up in the intertidal zone than other clams. As a facultative deposit-feeder, it overlaps with other clams, to some extent, in feeding (Gillespie et al. 1999; Byers 2005; Carswell et al. 2006). In the lower intertidal and subtidal zones, the Varnish Clams thin shell makes it more vulnerable to predators than other clams, and so in many regions, it is confined to a narrow band of shore (Gillespie et al. 1999; Byers 2005; Carswell et al. 2006).

Food/Prey- Nuttallia obscurata has developed dense populations in the intertidal zone in many parts of its range and has become a potentially important food source for shorebirds, diving ducks, crabs, and probably other land-based and aquatic predators as well (Gillespie et al. 1999; Lewis et al. 2007; Byers 2005). However, it is not clear whether the exotic clam has altered the abundance or distribution of predators.