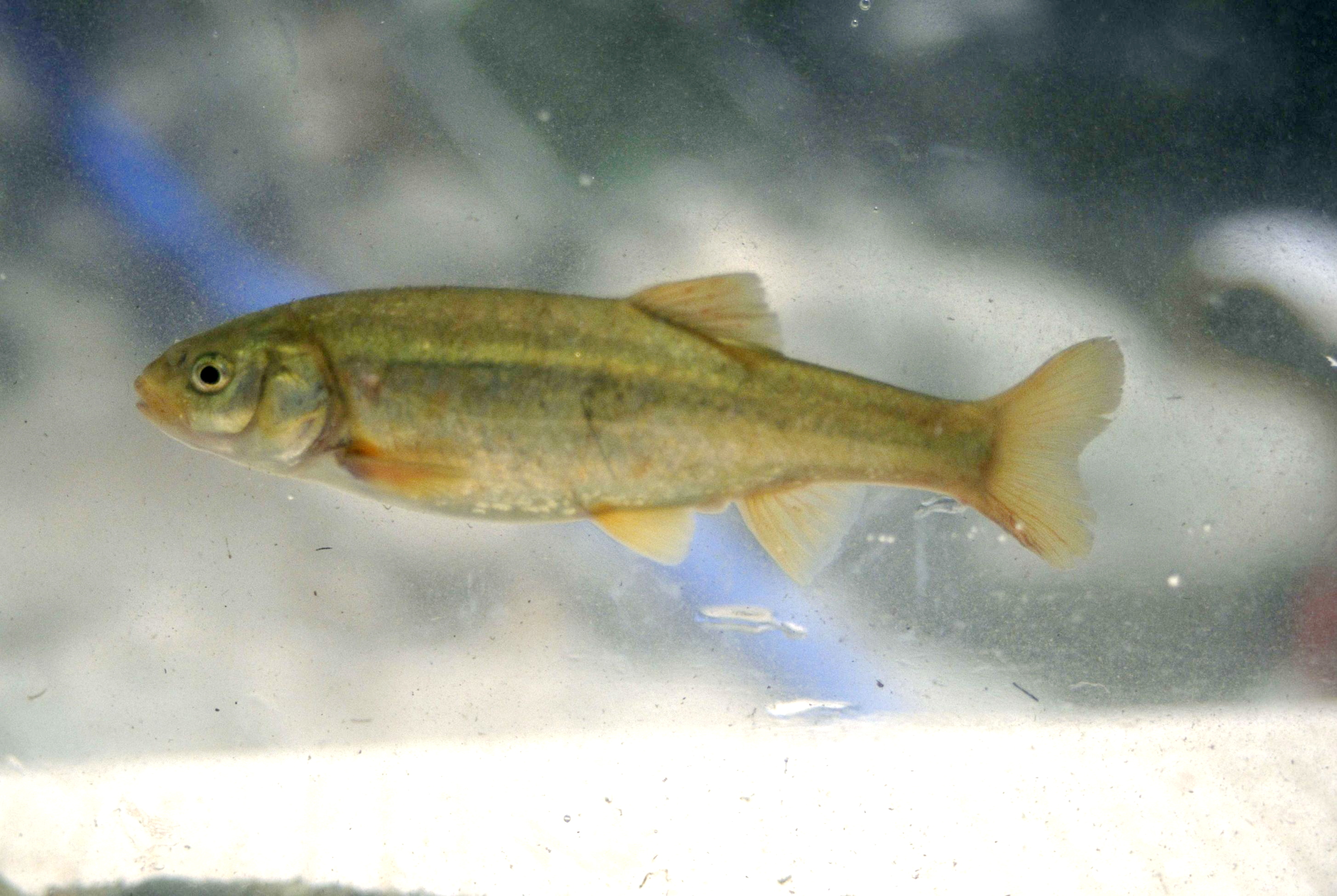 Arroyo Chub (Gila orcuttii) are small minnows native to Pacific streams from the Santa Monica Bay basin south to the Santa Margarita basin. They have been extirpated or are vulnerable over much of their native range, especially in the Los Angeles area. They were introduced with discarded bait, and with stocked trout in several California streams. They have had no reported ecological impact in introduced estuaries and are a species of conservation concern in the state of California, where they vulnerable to extinction within the next 100 years.

Arroyo Chub (Gila orcuttii) are small minnows native to Pacific streams from the Santa Monica Bay basin south to the Santa Margarita basin (Page and Burr 1991; Moyle 2002; USGS Nonindigenous Aquatic Species Program 2018). They have been extirpated or are vulnerable over much of their native range, especially in the Los Angeles area (UC Davis PISCES 2014). However, Arroyo Chubs has been introduced to other California streams, including the Santa Ynez, Santa Maria, Cuyama and Santa Clara, and Mohave River systems and other smaller coastal streams (Swift 1993; UC Davis PISCES 2014; USGS Nonindigenous Aquatic Species Program 2014). They were introduced with discarded bait, and as hitchhikers with stocked trout and were common in the Santa Clara estuary in 1994-1995 (Lafferty and Page 1997).

Arroyo Chub (Gila orcuttii) are native to Pacific Slope drainages in California, from the Santa Monica Bay basin south to the Santa Margarita basin. They have been extirpated from some streams due to heavy development and disturbance, especially around Los Angeles, and introduced to others. As a result, there is some disagreement about their native range (Swift et al. 1993; Page and Burr 1991; Moyle 2002; UC Davis PISCES 2014). Swift et al. (1993) map treats populations south of the Santa Monica basin as native, and those to the north as introduced, with some extirpated populations in the Los Angeles area. The invaded Pacific Slope streams include the Santa Ynez, Santa Maria, Cuyama, Santa Clara, and other smaller coastal streams (Swift et al. 1993; UC Davis PISCES 2014; USGS Nonindigenous Aquatic Species Program 2014). The northernmost introduced population is in Chorro Creek, in the drainage of Morro Bay (UC Davis PISCES 2014). Arroyo Chubs have also been introduced into Mohave River basin, flowing down the dry eastern side of the coastal range ((Swift et al. 1993).

Arroyo Chubs probably occur in the estuarine reaches of other southern California streams, but the only records that we have from tidal waters are from the Santa Clara River in Ventura County (Lafferty and Page 1997). All of the other California native fishes in this river are peripheral freshwater species and capable of dispersing through seawater. As a freshwater species, the Arroyo Chub is considered introduced to this basin because of the salinity barrier and its enclosed by steep mountains. These fish were first collected in the Santa Clara River drainage in 1934. In 1975, they occurred from the headwaters to the mouth of the river (Bell 1979). In 1994-1995, they occurred in the Santa Clara estuary. Salinities in the upper section of the estuary were 2-11 PSU (Lafferty and Page 1997). The likeliest vectors are discarded baitfish, or as stray in stocked gamefish.

Arroyo Chub (Gila orcutti) are small to medium-sized freshwater fish belonging to Cyprinidae, the carp and minnow family. Fish of this family have a single dorsal fin, abdominal pelvic fins, a lateral line, and cycloid (circular) scales. They lack true spines in their fins. They lack teeth in their mouths but have 1-3 rows of pharyngeal teeth. Most fishes of this family have forked tails (Page and Burr 1991). The Arroyo Chub has a chunky body and a thick caudal peduncle. The mouth is small, the snout is rounded, and the eyes are relatively large. There are eight dorsal fin rays, seven anal fin rays, and 48 to 52 lateral line scales. The lateral line reaches the caudal peduncle. This fish can reach 400 mm, but it is usually less than 120 cm. Males have larger fins than females and develop tubercles on the head during the breeding season. The body is olive dorsally, with silvery sides, and white ventrally. There is also a dusky-gray stripe along the side (Page and Burr 1991; Moyle 2002; UC Davis Pisces 2018). There are 14 species of Gila in the western United States, but none of them overlap with the introduced or native ranges of the Arroyo Chub (Page and Burr 1991).

Arroyo Chub (Gila orcutti) are small (usually) to medium-sized freshwater fish. Males develop larger fins than females, and tubercles on the head (PICES UC Davis 2018). Spawning takes place in pools of streams from February through August but is most frequent in June and July. A group of males chases a female and rubs the female below the pelvic fins, stimulating release of the eggs. The males then fertilize the eggs, which adhere to vegetation, substrate and debris. Eggs are laid in small batches and hatch in about 4 days at 24 C. Larvae remain in the substrate or on the bottom for 3 or 4 days, and then swim to the surface to fill their swim bladders, and then swim in the water column. Fish reach the juvenile stage at about 21 mm and congregate in still or slow-flowing water with vegetation cover. They reach ~60 mm in their first year (Moyle 2002; Feeney and Swift 2008; PICES UC Davis 2018).

Arroyo Chubs commonly occur in slow-flowing, low-gradient streams at 10-24 C. The extremes of their temperature tolerance are not known (PICES UC Davis 2018). They are freshwater fishes but have been collected in the Santa Clara River estuary in the upper portion of the estuary, where salinities ranged from 3 to 11 PSU (Lafferty and Page 1997). Typical habitats are slow-moving streams with bottoms of sand or mud, but also over gravel, cobbles, and boulders, usually at depths greater than 40 cm (Moyle 200; Feeney and Swift 2008 PICES UC Davis 2018). They are considered omnivorous, feeding on algae, invertebrates, and insects, however, their stomachs contain 70-80% vegetable matter (Moyle 2002). As a relatively small fish Arroyo Chubs are prone to predation, especially by introduced game fishes. The fry are vulnerable to Mosquitofish (Gambusia affinis). One of their unusual predators in the Santa Clara River system was the introduced Africa Clawed Frog, Xenopus laevis.

Arroyo Chubs (Gila orcutti) are a species of conservation concern in the state of California, even though their present introduced range is larger than their native range (Swift et al. 1993). The pace of development and stream degradation means that this species is vulnerable to extinction within the next 100 years (UC Davis PISCES 2014). They have had no reported ecological impact in estuaries, but they are being investigated as a less invasive mosquito biocontrol species in inland wetlands, and they have hybridized with native cyprinid species in inland watersheds.

Arroyo Chubs are being studied for the biocontrol of mosquitos in southern California wetlands, as a substitute for the invasive Western Mosquitofish (Gambusia affinis). In experimental ponds, both fishes reduced mosquito larva abundance roughly equally, but Arroyo Chubs had less impact on non-target invertebrates (Van Dam and Walton 2007).

Hybridization- Arroyo Chubs were introduced to the Mojave River in the 1930s and extensively hybridized with the Mohave Tui Chub (Siphateles bicolor mohavensis), replacing the native fish by competition and hybridization (Moyle 2002). The native purebred fish occur in only a few ponds in California (https://www.wildlife.ca.gov/Regions/6/Desert-Fishes/Mohave-Tui-Chub.) In the Cuyama River, Arroyo Chubs have hybridized extensively with the native California Roach (Hesperoleucus symmetricus) (Moyle 2002).