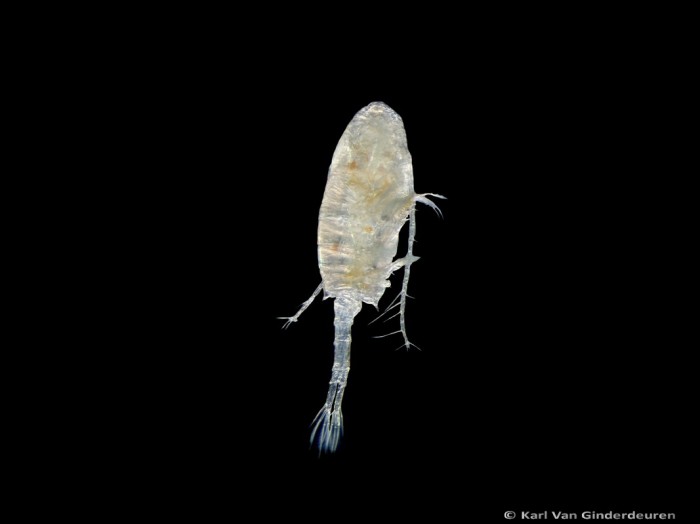 Pseudodiaptomus marinus is a marine calanoid copepod. It is native to the Northwest Pacific from Russia, Japan, China and the Philippines. It has been introduced to Hawaii, Mexico, California, Italy and France. It has been found within the ballast water of commercial vessels, a likely vector for its global spread. It is characteristic of coastal waters and the lower parts of estuaries. No ecological or economic impacts have been reported for this species.

Pseudodiaptomus marinus has been considered native to the Northwest Pacific, from Peter the Great Bay, Russia and northern Hokkaido, Japan to Hong Kong and the Philippines (Brodskii 1967; Fleminger and Hendrix Kramer 1988; Walter 1989; U.S. National Museum of Natural History 2012). The identity of specimens from the Indian Ocean, Mauritius (Grindley and Grice 1969) and the Andaman Islands (Pillai 1980, cited by Fleminger and Hendrix Kramer 1988) is in doubt (Fleminger and Hendrix Kramer 1988). This copepod has been introduced to Hawaii (Jones 1966), Mexico (Jiménez-Pérez and Castro-Longoria 2006), California (Fleminger and Hendrix Kremer 1988; Orsi and Walter 1991), Italy (de Olazabal and Tirelli 2011; Sabia et al. 2012), and France (Brylinski et al. 2012). A genetic analysis found that the likeliest source of the population in San Francisco Bay was Japan. This analysis also suggested that southern populations, from Xiamen, China, may represent a separate species (Ohtsuka et al. 2018). Specimens from the southern part of the known range, including Hong Kong and the Philippines, should be reexamined.

In 1998, P. marinus was collected further south and north on the West Coast. To the south, it was found in Ensenada, Baja California, Mexico in the Bahia de Todos Santos (Jiménez-Pérez and Castro-Longoria 2002). To the north, a single specimen of P. marinus was collected in Elliott Bay, Washington, but no further specimens were found in Puget Sound (Cordell 1998). In 1998, it was found in ballast water of a ship en route to Vancouver, British Columbia, before and after mid-ocean exchange (Levings et al. 2004), and was found in both West Coast and trans-Pacific ships docking in Puget Sound (Cordell et al. 2008a).

Pseudodiaptomus marinus was collected in 1966 in the Alai Wai Canal, Oahu (Jones 1966).

In 2007 and 2009, 15 specimens of Pseudodiaptomus marinus were collected in the Adriatic Sea, Italy, near Rimini and Monfalcone, but this copepod was not considered to be established there at this time (de Olazabal and Tirelli 2011). However, it was collected in 2008 in the Lao di Faro, a small lagoon in Sicily and soon became the third most abundant copepod there (Sabia et al. 2012). In 2010, P. marinus was collected in Calais Harbor, and later in the English Channel off Gravelines, both in France. Small numbers of males, ovigerous females, and copepodites, suggest that this copepod is established off France at a very low density (Brylinski et al. 2012). This copepod was also found further south, in the Gironde estuary (Sautour and Dessier, pers. comm., cited by Brylinski et al. 2012), and in Bilbao, Spain (in 2010, Uriarte et al. 2016). In 2016, P. marinus was collected in the Black Sea, and is now established in Sevastopol Bay, at 18 PSU and 8-25 C (Svetlichney et al. 2019).

The bodies of adult female Pseudodiaptomus marinus have the head separate from the thorax, but the 1st thoracic segment is partially fused with the head. The cepalothorax is widest at midlength, and the anterior end of the body forms a rounded angle. Near the tip, dorsally, is a single eye, which is visible, both in dorsal and lateral views. The 4th and 5th thoracic, swimming-leg bearing, segments are fused. The ends of the last thoracic segment are produced into short acute processes (flanges, points) at the end of cephalothorax. The urosome has four segments, all but the last bearing a row of spinules on the posterior edge, with setules increasing in size with each successive segment. The genital segment (1st urosome segment) is very swollen ventrally, produced into a short, wide protuberance, directed backward. The antennules (1st antenna) are symmetrical, with 21 segments. The 2nd to 4th pairs of swimming legs bear wide spines, serrated on both sides, on the outer sides of their exopodites and on the tips of the legs. The 5th pair of legs is symmetrical, uniramous, with 4 segments, and ends with 3 terminal spines. The distal joint bears 2 apical spines. Total body length is 1.25-1.53 mm. Females carry a single mass of eggs. Description based on Brodskii 1967 and Fleminger and Hendrix Kramer 1988.

The body of adult males is slightly more slender than that of the females. The urosome has 5 segments, with segments 2-4 bearing a row of spinules on the posterior edge. The left antenna has 21 segments and resembles the females'. The right antenna has 20 segments, with segments 12 to 15 enlarged, and a hinge-joint at segments 16-17. The 5th pair of swimming legs is complex and asymmetrical. The distal segment of the endopod of the right leg lacks apical appendages, and is paddle-like with short spines. The terminal segment joint of the left leg bears a spine with multiple points. Male 5th legs are somewhat variable in form and this appears to be random, rather than geographical. Description based on Brodskii 1967 and Fleminger and Hendrix Kramer 1988.

The morphology of copepodite and naupliar stages of this copepod have been described (Uye and Onbe 1975). This copepod is characteristic of marine waters, but is common in polyhaline and mesohaline waters of estuaries.

Planktonic calanoid copepods mate in the water column. Males use their modified antenules and 5th pair of swimming legs to grasp the female and transfer spermatophores to the female's genital segment. Female Pseudodiaptomus marinus carry eggs in one symmetrical cluster under the urosome (Barnes 1983; Cordell et al. 1992; Cordell et al. 2007). Eggs hatch into nauplii which go through six stages. The first stage, NI, has 3 pairs of appendages and is unsegmented - each molt has additional appendages and/or more differentiation of segments. The sixth stage (NVI) molts into a first copepodite stage (CI), with the basic form of the adult, and fully differentiated feeding structures, but with only two pairs of swimming legs and only one urosomal segment. The copepod goes through five additonal molts, with increasing numbers of swimming legs, urosomal segments, and sexual differentiation. The sixth (CVI) stage is the male or female adult (Uye and Onbe 1975; Barnes 1983). In the laboratory at 20 C, development from eggs to mature adults took about 20 days (Uye and Onbe 1975). Estimated generation times in the field (Fukuyama Harbor, Japan) were 63 to 17 days at average temperatures of 11.6 to 24. 4 C (Liang and Uye 1997).

Pseudodiaptomus marinus, like many other copepods of its genus, is characteristic of coastal waters and the lower parts of estuaries (Walter 1989; Orsi and Walter 1991; Bollens et al. 2011). Late copepodites and adults of the genus Pseudodiaptomus often have strong epibenthic tendencies, particularly by day, and when carrying eggs. Adults cling to hard surfaces using adhesive hairs on their antennules and filter in place. This tendency is strongest in adult females (Sabia et al. 2012, P. marinus, Italy; P. pelagicus, Narragansett Bay, Fofonoff, personal observations). All life stages feed on phytoplankton, although adults may also capture ciliates, rotifers, and copepod nauplii (Barnes 1983). Adult Pseudodiaptomus marinus tolerated salinities of 4 or 5 to 44 PSU ((Orsi and Walter 1991; Svetlichny 2019), and temperatures of 8 to 37 C (Liang and Uye 1997; Jiang et et al. 2009; Svetlichny 2019). Females apparently survive periods of low temperature in a state of dormancy, without carrying eggs sacs (Svetlichny 2019).

There are no reported impacts of Pseudodiaptomus marinus. In Southern California, it may compete with the native P. euryhalinus (Fleminger and Kramer 1988), but this possible interaction has not been studied directly.

Brewin, Beryl L. (1946) Ascidians in the vicinity of the Portobello Marine Station, Transactions of the Royal Society of New Zealand 76(2): 87-81

Grindley, John R., Grice, George D. (1969) A rediscription of Pseudodiaptomus marinus Sato (Copepoda, Calanoida) and its occurrence at the Island of Mauritius, Crustaceana 16(2): 125-134

Liang, D.; Uye, S. (1997) Population dynamics and production of the planktonic copepods in a eutrophic inlet of the Inland Sea of Japan, Marine Biology 128: 415-421

Uye, Shin-ichi; Onbe, Takashi (1975) The developmental stages of Pseudodiaptomus marinus reared in the laboratory, Bulletin of the Plankton Society of Japan 21(2): 1-12