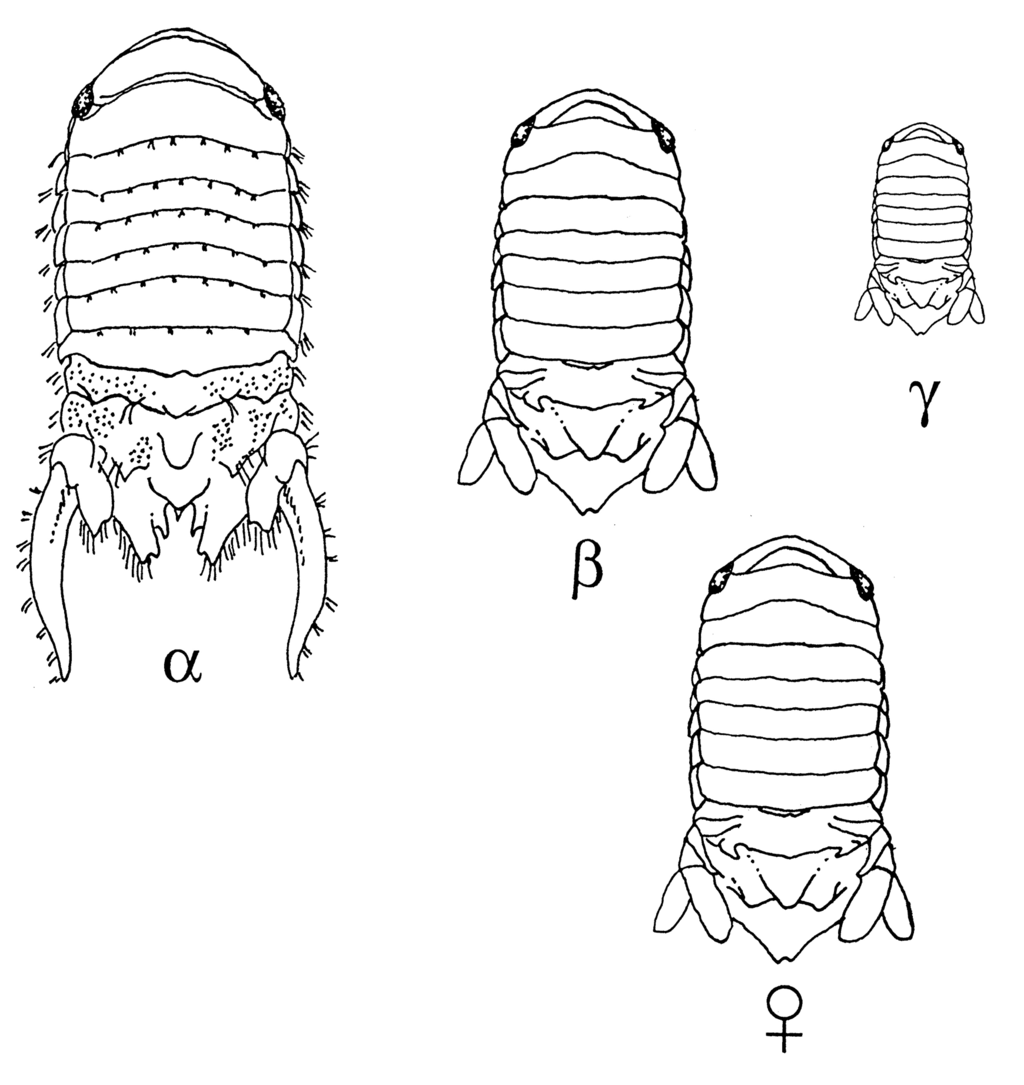 Paracerceis sculpta is a marine isopod. It is native to Southern California and the Pacific Coast of Mexico, including the Gulf of California. It has been widely introduced around the world, in warm-temperate-to-tropical harbors, on every continent, except Antarctica. It is strongly sexually dimorphic and lives in dense colonies, where one or few males occur with a harem of females. It commonly occurs in sheltered sandy and rocky habitats, growing within fouling communities, inside sponges, underneath rocks, and among algae. Although this species is a widespread invader, no ecological or economic impacts have been reported.

Paracerceis sculpta was described from San Diego and San Clemente Island, California, and later found from Southern California and the Pacific Coast of Mexico, including the Gulf of California (Richardson 1905; Menzies 1962; Schultz 1969; Espinosa and Hendrickx 2001). It has also been collected in Ecuador (US National Museum of Natural History 2016). It has been widely introduced around the world, in warm-temperate-to-tropical harbors, on every continent, except Antarctica. Although this isopod has probably been overlooked in some locations, the many recent discoveries of P. sculpta suggest that it has been transported to many places since the mid-20th century (Rodriguez et al. 1992; Hewitt and Campbell 2001).

In 1996, 29 specimens of Paracerceis sculpta were collected at two locations, Fort Pierce and Sebastian Inlet, on the Indian River Lagoon, Florida (USNM 285258, USNM 285259, US National Museum of Natural History 2016). The animals were found on floating docks and ropes, in fouling communities (‘Caulerpa, sponges, hydroids, Porites, coralline algae, and tunicates'). Marilyn Schotte, of the Museum, confirmed the identification (personal communication, 2009). We consider P. sculpta to be established in the Indian River Lagoon.

In 2009, a population of P. sculpta was found in Port Aransas, Texas, in crevices in oyster reefs (Munguia and Shuster 2013). It is likely that this isopod is more widespread along the Atlantic Coast of Florida and the Gulf of Mexico, but is overlooked due to confusion with the similar, native, P. caudata.

Paracerceis sculpta was found in a survey of isopods and tanaiids on buoys in Pearl Harbor, Oahu, and Hilo Harbor, Hawaii, in 1943. It was considered likely to have been transported on naval ships from San Diego (Miller 1968). It was also found in Kaneohe Bay, Oahu in 1962 (USNM 107929, US National Museum of Natural History 2016), and in Port Allen Harbor, Kauai in 2002 (Coles 2004).

In the Mediterranean, P. sculpta was first reported from the Lake of Tunis, Tunisia (Rezig et al. 1978, cited by Tlig-Zuoari et al. 2009 and Amor et al. 2016). Records from the Mediterranean are spotty. In 1983-1985, it was reported from several locations in Italy, the Venice Lagoon in the Adriatic, the Lake of Caprolace (Tyrhennian Sea), the Mar Piccolo, Gulf of Taranto and the Harbor of Augusta, Sicily (Ionian Sea). These records were mostly from confined lagoon or harbor habitats (Forniz and Maggiore 1985). In 1995, it was collected on sandy beaches off Catalonia, Spain (Munilla and San Vicente 2004). On the open Atlantic coast, it was found in the Gulf of Cadiz, Spain in 1988 (Rodriguez et al. 1992, Castello and Carballo 2002).

Paracerceis sculpta has several widely separated invasions in the Indian Ocean and western Pacific. It was found to be established in Pakistan (Javed 2001), South Africa (Port Elizabeth, Griffiths et al. 2005), and the Seto Inland Sea, Japan (in 1986, Ariyama and Otani 2004, cited by Lutaenko et al. 2014). One male specimen was collected from Hong Kong in 1986 (Li and Li 2003). Paracerceis sculpta was first found in Australian waters in Townsville, Queensland, in 1975; and later in Sydney Harbour, New South Wales, in 1984; Port Philip Bay, Adelaide, South Australia, in 2000, and Bunbury, Western Australia, in 1999 (Hewitt and Campbell 2001). This isopod was found on wharf pilings, among algae, fan worms, and sponges (Hewitt and Campbell 2001).

The Paracerceis genus shows strong sexual dimorphism, with uropods developed into long caudal processes, and a deep indentation in the apex of the pleotelson, in males. In females, the telson is simple and the isopods are less ornamented. They have a crescent-shaped head, which is wider than it is long, with prominent eyes, an oval-rectangular body, and a broad, roughly triangular pleotelson (female) or a deep slit with an elaborately curved outline (male). The anterior end of the slit has a short median tooth in P. sculpta. In large (alpha) males, the exopod of the uropod is greatly extended (~1/3 of body length), and more than twice as long as the endopod. The exopods and endopods have clusters of bristles, but do not bear spines. The endopod does not reach the apex of the pleotelson (Menzies 1962; Schultz 1969; Shuster 1987; Harrison and Ellis 1991; Brusca 2007). In females, the telson is roughly triangular and usually has an apical notch (Schultz 1969; Pires 1980; Rodriguez et al. 1992). [However, Brusca et al.'s (2007) illustration shows the female telson ending in a rounded tip, so this feature may be variable.] In females, the uropods are not modified, with the exopods and endopods nearly equal in length. Males, in species descriptions, range from 4.4 to 9.0 mm, and females from 3.0 to 8.5 mm (Pires 1989; Rodriguez et al. 1992; Espinosa and Hendrickx 2002).

Males of Paracerceis sculpta, in the Gulf of California, guard harems of females and compete intensely for mates in the cavities of sponges. They can develop into one of three morphotypes associated with different mating strategies. Alpha males are the largest, ~5-8 mm, and have the elaborate elongated uropods described above. Beta males resemble females in shape, and are 3-5 mm long, and lack elongated uropods. Gamma males are 2-3 mm long. These morphologies are associated with aggressive guarding, female mimicry, and 'sneaking', respectively (Shuster 1987). The alpha males are normally the ones included and illustrated in species descriptions (Schultz 1969; Pires 1989; Rodriguez et al. 1992; Espinosa and Hendrickx 2002).

Paracerceis caudata
Paracerceis caudata ranges from New Jersey to Brazil in seagrasses and corals. The male of this isopod has two median teeth in the anterior end of the slit in the pleotelson (Schultz 1969).

As with most isopods, Paracerceis sculpta has separate sexes and fertilization is internal. The young are brooded by the female and development is direct. It commonly lives in dense colonies, where one or few males occur with a harem of females. In Gulf of California populations, males occur in three morphotypes, associated with different mating strategies. Alpha males are the largest, ~5-8 mm, and have elaborate elongated uropods. Beta males resemble females in shape, and are 3-5 mm long, and lack the elongated uropods. Gamma males are 2-3 mm long. These morphologies are associated with aggressive guarding, female mimicry, and 'sneaking', respectively (Shuster 1987). Competition for females appears to be strong among alpha males, with most guarding 0-1 females, but a few up to 12 females. The polymorphism appears to be controlled by the interaction of three genes which interact to affect sex and morphology (Shuster and Sassaman 1997). In introduced populations, only alpha-males and females have been reported, to our knowledge (Forniz and Maggiore 1985; Hewitt and Campbell 2001; Pires 1980; Munguia and Shuster 2013). Females maintained with a single alpha male produced 40 to 120 live juveniles each. When a male was maintained with four females, in an artificial sponge, females produced 30-90 juveniles (Shuster 1995).

Paracerceis sculpta is widespread in warm-temperate to tropical climates (13-30°C), and polyhaline to hyperhaline salinities (28-46 PSU, Rodriguez et al. 1992; Espinosa and Henidrickx 2002). It is known from a wide range of habitats, including the interiors of invertebrates, seaweeds, wharf pilings, rock crevices, but also from soft sediments. In its native and invaded regions, its colonized calcareous sponges (Espinosa-Pérez and Hendrickx 2001). In Brazil, it has been found in seaweed communities (Sargassum and Galaxaura spp.) (Pires 1980; Loyola e Silva et al. 1999). In Australia, it was found in wharf pilings and pontoons, often associated with sponges and fan worms (Hewitt and Campbell 2001), and also on hulls of naval ships (Montelli and Lewis 2008). In Pacific Mexico, it was found on mangrove roots (Espinosa-Pérez and Hendrickx 2001). In Texas, P. sculpta occurs in the crevices of oyster reefs (Munguia and Shuster 2013). This isopod has also been collected from mud bottoms (Rodriguez et al. 1992). Juvenile isopods probably feed by scraping algae off surfaces (Brusca et al. 2007). Shuster (1987) cultured P. sculpta using a benthic diatom, Amphiprora sp., as food.

Although Paracerceis sculpta is a widely distributed marine invader, no ecological or economic impacts have been reported.

Javed, Waquar; Ahmed, Roshan (1987) On the occurrence of Paradella dianae, a genus and species of Sphaeromatidae (Isopoda, Flabellifera) in the Arabian Sea., Crustaceana 53(2): 215-217