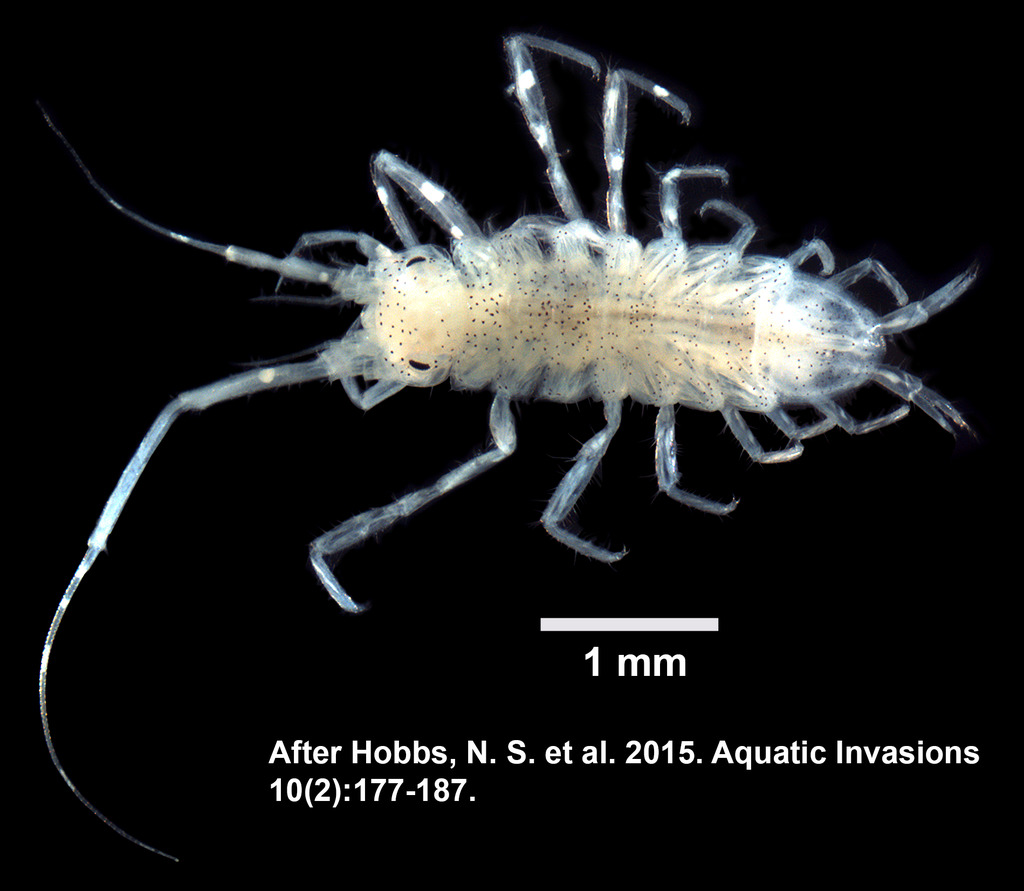 Ianiropsis serricaudis is a small, free-living marine asellotan isopod. It is native to the Northwest Pacific from Russia, Japan, and Korea. Introduced populations are known from the East and West coasts of North America and Europe. It occurs in coastal fouling communities on natural and artificial substrates where it shelters among algae and invertebrates. Likely vectors for the spread of this isopod are ship fouling, ballast water, and oyster aquaculture. There are no known ecological or economic impacts of this species in introduced locations.

Ianiropsis serricaudis was described from the Pacific coast of Russia (Gurjanova 1936, cited by Hobbs et al. 2015), and is known to occur from the Korea Straits to the Sea of Okhotsk (Jang and Kwon 1990; Hobbs et al. 2015). In 1977, it was tentatively identified from San Francisco Bay by Carlton, Iverson, and Chapman (Carlton 1979), but was later not considered to be established because of taxonomic uncertainty (Cohen and Carlton 1995). In 2000, an unidentified Ianiropsis, the first of the genus to be found on the East Coast, was found in rapid assessment surveys of nonindigenous species in New England (MIT Sea Grant 2000-2008; Pederson et al. 2003). Collections of similar isopods were made from fouling communities in the Netherlands (in 2000, Faasse 2007, cited by Hobbs et al. 2015); England (in 2004, Hobbs et al. 2015); Puget Sound (in 2010, Cordell et al. 2012), and the Lagoon of Venice (in 2012, Marchini et al. 2015). Likely vectors for the spread of this isopod are ship fouling, ballast water, and oyster aquaculture (Hobbs et al. 2015).

Ianiropsis serricaudis was collected and identified from fouling communities in San Francisco Bay by Carlton, Iverson, and Chapman in 1977. It was found associated with the introduced tunicates Styela clava, Ciona robusta, and the isopod Dynoides dentisinus (Carlton 1979). Ianiropsis spp. continued to be collected, but identifications to species were difficult, owing to a large number of native species. Cohen and Carlton (1995) listed I. serricaudis among species whose establishment was uncertain. Specimens collected in the 1990s and 2000s from Treasure Island (1993), Richmond (2004), and the Presidio Yacht Club (2004) were verified as I. serricaudis (Hobbs et al. 2015), all in the central Bay. Additional collections were made in 2005 at Coyote Point Marina and San Mateo, in South San Francisco Bay (Foss 2009). In 2002, three specimens of I. serricaudis were identified from Elkhorn Slough, in Moss Landing. The isopods were found near reefs of the tubeworm Ficopomatus enigmaticus (Heiman and Micheli 2010; Hobbs et al. 2015). This isopod was reported from open coast areas at Point Arena and Purisima Point in 2004 (Maloney et al. 2006), but we do not know if populations are established there.

In 2010, I. serricaudis was found to be abundant in Puget Sound, Washington at one site: Taylor Shellfish Farms in Totten Inlet (Cordell et al. 2012). It was associated with Didemnum vexillum there, but was not found at other locations in Puget Sound (Cordell et al. 2012; Hobbs et al. 2015). Living specimens of I. serricaudis were found on a dock and a boat that drifted across the Pacific to the Oregon coast after the Japanese earthquake and tsunami of 2011, but these transports are not known to have resulted in established populations (Hobbs et al. 2015).

There are no native Ianiropsis spp. in the Northwest Atlantic, but the small size of I. serricaudis makes it easy to overlook. On the East Coast, Ianiropsis serricaudis was first collected in 1999 in the Mystic River, a tributary of Long Island Sound, 'amongst the native bryozoan Amathia dichotoma', but not identified until 2012 (Hobbs et al. 2015). In New England, surveys conducted in 2000-2014 found I. serricaudis, identified as Ianiropsis sp., from Waterford, Connecticut to Bourne Marina, Massachusetts (MA) (MIT Sea Grant 2003-2008; Pederson et al. 2003; Janiak and Whitlach 2012). In 2007-2013, it was found in the Gulf of Maine, from Sandwich, MA (Cape Cod Bay) to Camden, Maine, (Penobscot Bay) (MIT Sea Grant 2009-2012; Wells et al. 2014). It was typically found on dock floats overgrown with Ulva sp. and tunicates, and rocky intertidal shores (Janiak and Whitlach 2012; Hobbs et al. 2015). In 2012-2013, I. serricaudis was found in Barnegat Bay, New Jersey, associated with the tunicate Botryllus schlosseri (Pallas, 1766), and the native bryozoans Einhornia crustulenta (Pallas, 1766) and Schizoporella sp., as well as the green alga Ulva lactuca (Hobbs et al. 2015). In 2012, this isopod was found in at one station in Sinepuxent Bay, Maryland, at only one of 13 stations in the Maryalnd Coastal Bays (Morales-Núñez, and Chigbu 2018).

Ianiropsis serricaudis has a lozenge-shaped body, about 3X as long as wide, with the sides nearly parallel, broadest in pereaonal segment 3, and slightly tapered towards the head. The margin of the cephalon is slightly concave and has an inconspicuous rostrum on the frontal margin. The pleotelson has a small median lobe, with 3 or 4 spine-like serrations on each side (sometimes up to 7) and 2 or 3 unequal setae at the base of each serration. The uropods are slightly longer than the pleotelson. Antenna 1 is comparatively short, reaching segment 5 of Antenna 2 and about 1/4 of the body length. The Antennae 2 of I. serricaudis are about equal to body length, and peduncle segments 6 and 7 are especially elongated, totaling about 1/2 body length. In mature males, the maxilliped palps are elongated, with 5 segments, extending well beyond the basal segments of Antenna 2 and visible in dorsal view. The pereiopods are long, 1X-2X body maximum width. Pereiopods 1 have 3 claws each, while Pereiopods 7 have 2-3 claws. Antenna 2 is 6/10 of body length, with a flagellum of 24 segments. In males, Pleopod pairs 1 and 2 are modified for copulation. Pleopods 1 are fused to form a narrow appendage (the sympod),widening near the tip and ending in a pair of thick spines, each bearing 4 outer setae, a group of short setae on the inner side of the spine, and a longer, medial group of 6-7 longer setae. Pleopods 2 are not fused, but the inner ramus of each is modified into a needle-like stylus. Males are up 3.2 mm long and females are at least 2.4 mm. Reported colors vary, apparently with substrate. Gurjanova (1936, cited by Hobbs et al. 2015), reported that the isopods in Pacific Russia were pale, but with black eyes, spotted with black melanophores, giving a gray appearance. Korean specimens had brown melanophores (Jang and Kwon 1990), while Dutch animals often had red eyes and brown melanophores. New England animals varied from greenish to yellowish, and reddish, according to the color of the bryozoans and sponges on which they were feeding. Description based on: Jang and Kwon 1990, Wilson and Wagele 1994, Doti and Wilson 2010, Hobbs et al. 2015.

Ianiropsis serricaudis has separate sexes, with internal fertilization, and direct development. Kussakin (1988, cited by Hobbs et al. 2015) observed breeding of I. serricaudis in Russia, in August-October, with 7-32 (average 18) eggs per female.

Ianiropsis serricaudis occurs in cold-temperate to warm-temperate climates, and has been collected at temperatures ranging from -1.8 C to 24 C. It has been collected at salinities from 16.9 to 35 PSU (Hobbs et al. 2015). This isopod occurs on a wide range of fouling organisms which provide shelter, including algae (red algae-Pachyarthron cretaceum, Chondrus crispus, Grateloupia turuturu; brown algae- Laminaria sp., green algae- Ulva spp.); sponges (Halichondria bowerbanki, Clathria prolifera); bryozoans (Amathia dichotoma, Einhornia crustulenta, Schizoporella sp., Tricellaria inopinata); and tunicates (Botrylloides violaceus, Ciona robusta, Didemnum vexillum, Diplosoma listerianum, Styela clava). Many of the organisms used by I. serricaudis are native to the Northwest Pacific, the native region of I. serricaudis (Hobbs et al. 2015). The feeding habits of this isopod is not known, but it may feed on the fecal material of colonial invertebrates, as well as, the surface microbiota and detritus associated with colonial invertebrates and algae.

Impacts of Ianiropsis serricaudis have not been studied. However, in some cases this isopod can reach extraordinary abundances within fouling communities, and could have impacts as a competitor, as prey, or in some other ecological role (Hobbs et al. 2015).