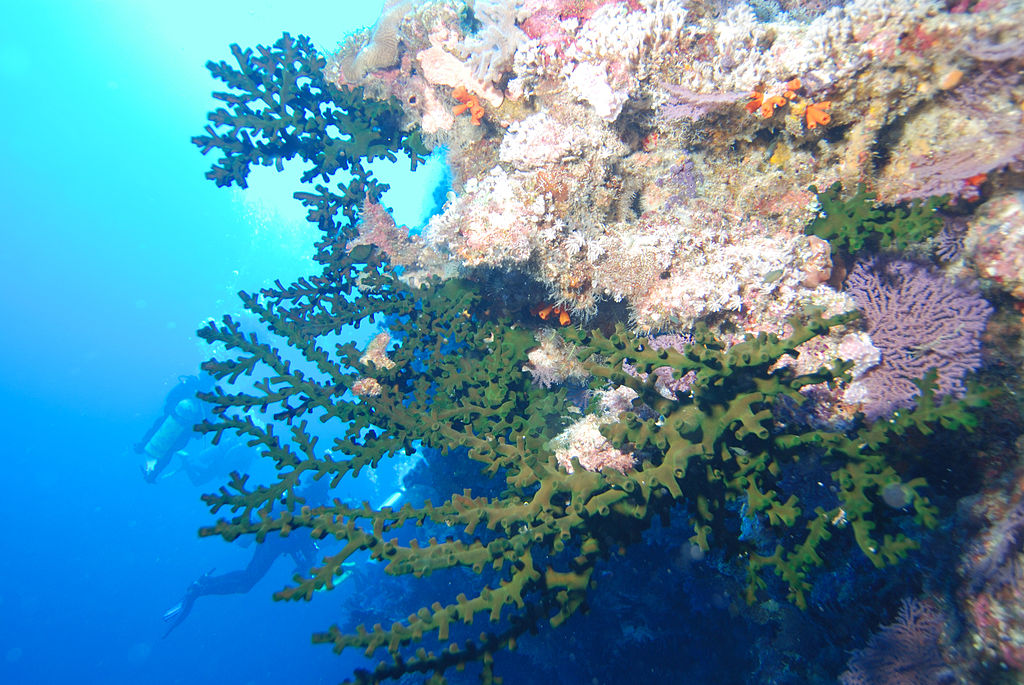 Tubastraea micranthus is an azooxanthellate coral commonly known as the Black Sun Coral. It is native to the tropical Indo-Pacific, ranging from the Red Sea and Madagascar to Japan, Hawaii and Tonga. Its only occurrence beyond its native range are populations established on an oil platform off Louisiana in the Gulf of Mexico. It grows in bush or tree-like colonies, is capable of forming reefs, and is adapted to environments with strong currents. Colonies can grow on exposed bottom surfaces, on ledges, shipwrecks, and oil platforms. It has no known impacts in its native or introduced range.

In 2006, during a survey of corals on operating and abandoned oil platforms, extensive populations of T. micranthus were found, confined to only one of the 83 rigs surveyed (G1-93-B). The rig was the standing production platform GI-93-B (28°32.96'N, 90°40.11'W), located about 100 km off the coast of Louisiana. This coral has increased in abundance in the years since it was discovered. By 2010, it had spread to eight other oil platforms in the region (Sammarco 2010). The colonies are spreading in waters influenced by the plume of turbid, nutrient-rich water from the Mississippi River (Sammarco 2014).

Tubastraea micranthus is an azooxanthellate coral (lacking symbiotic algae), which grows in colonies consisting of clumps of calcareous cups, projecting from a spongy calcareous base. The corallites (calcareous wall around a single polyp) flare outward, and project in a loosely branching fashion. The calyx (mouth region) is 6-8 mm in diameter, smaller than that of T. coccinea. The corallite skeleton is white, with poorly defined ribs. The interior of the corallite is partly divided by septa, projecting into the body cavity- there are four kinds of septa, of varying width (S2 and S3 are well-developed, in contrast to T. coccinea) which are arranged in cycles around the opening of the corallite. There are 48 septa. The septa do not protrude on the exterior of the corallite. There is a prominent columella - a projection of the skeleton in the center of the corallite. The body of the polyp itself is black or dark-green, and the tentacles are also usually black or green, but sometimes gray (Sammarco et al. 2010).

The colonies of T. micranthus grow in bushy or tree-like colonies, up to 1 m tall (Schumacher 1984). At their only known introduced location, on an oil platform off Louisiana, colonies were only about 0.5 m tall, probably because they were still young (Sammarco et al. 2010). Branches can be 1-3 cm thick, and are usually oriented perpendicular to the current (Schumacher 1984). Size and calcification of colonies varies greatly in the Indo-Pacific, varying with environment, but also possibly indicating cryptic species (Schuhmacher 1984).

Tubastraea micranthus is a coral which grows in bush or tree-like colonies (up to 1 m in diameter), and is capable of forming reefs (Schuhmacher 1984). Polyps reproduce asexually by budding from the base, or from the oral disk, to produce new polyps, which secrete their own calcareous skeletons (Barnes 1983; Harrison 2011). The reproductive biology of the planulae of this species is not known. However, its congener, T. coccinea, is hermaphroditic, and releases sperm into the water. Eggs and the developing planula larvae are brooded. Planulae of T. coccinea can also be produced asexually (Ayre & Resing 1986; Harrison 2011). The larvae of T. coccinea can be competent for up to 100 days (Fenner 2001). It is unclear to what extent these features apply to T. micranthus.

Tubastraea micranthus grows in tree-like colonies which have unusual structural strength, and are adapted to environments with strong currents (Schuhmacher 1984). They can grow on exposed bottom surfaces, on ledges, shipwrecks, and oil platforms (Schuhmacher 1984; Perkol-Finkel et al. 2006; Sammarco et al. 2010). Tubastraea micranthus lacks zooxanthellae (symbiotic algae), and so is not dependent on photosynthesis, relying on zooplankton captured with their tentacles. Because of its dependence on captured food, its growth rates are slower than those of corals with zooxanthellae (4 cm, yr-1, compared to 12 cm, yr-1 in some acroporid corals (Schuhmacher 1984). Tubastraea micranthus, probably because of its lack of zooxanthellae, extends into deeper water, down to 138 m (the bottom of the platform), than its congener T. coccinea (Sammarco et al. 2013).

Tubastraea micranthus is known from only one location outside its native range, oil platforms off Louisiana, where it is abundant and spreading. It has no known impacts here. However, this species has the potential to compete with native corals and other sessile organisms, and may alter coral reef habitats. The present density and rate of spread make erradication difficult (Sammarco et al. 2014). Web searches indicate that T. micranthus is sold in the aquarium trade, but is regarded as difficult to keep, requiring daily feedings and strong water movement.

Fenner, Douglas (2001) Biogeography of three Caribbean corals (Scleractinia) and the invasion of Tubastraea coccinea into the Gulf of Mexico, Bulletin of Marine Science 69(3): 1175-1189