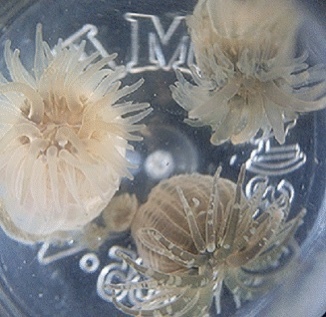 Diadumene paranensis was first identified during the 1970s and is believed to be an introduced species on the West Coast of North America. Although it has some similarity to the related D. cincta, it was thought to be a separate species and had remained unidentified. Recently, it has been described from Paranagua Bay, Brazil, and named D. paranaensis However, its range there is limited, and its native region is still unknown (Benedi et al. 2015; Glon et al. 2020).. It currently occurs in San Francisco Bay, California from the Carquinez Straits and San Pablo Bay throughout the Central and South Bay. It is found on floats, pilings, rocks, buried shells, and shells of living Atlantic Mud Snails. No impacts have been reported for this species.

Diadumene paranaensis was first reported from San Francisco Bay by James T. Carlton (1979) in his doctoral dissertation as Diadumene sp. 1. It had not been noted by Light (1941, cited by Carlton 1979) or Hand (1956), but was apparently common in the Bay by the early 1970s. Two biologists (D. Dunn, cited by Carlton 1979; T. Blanchard, cited by Cohen and Carlton 1995), in unpublished works, suggested that Diadumene sp. 1 might be related to D. cincta, a species found in European waters and considered probably native (den Hartog and Ates 2011). However, recent publications suggest that the species referred to as Diadumene sp. 1 was not D. cincta, but D. paranaensis (Cohen et al. 2005; California Academy of Science 2005; Fautin, in Carlton 2007; Robinson et al. 2011). Diadumene paranaensis’s native region was unknown, though Cohen and Carlton (1995) considered it to be tentatively of Atlantic origin, however, a very similar asexually reproducing anemone was found growing in on artificial structures in a harbor in Paranaqua Bay, Brazil, in 2009-2010. D. paranaensis was found in a very restricted area and considered to be non-native in Brazil (Benedi et al. 2015). Genetic comparisons of the San Francisco and Brazilian populations have not been made, to our knowledge, but Glon et al. consider the morphological descriptions a match (Glon et al. 2010).

Diadumene paranaensis was apparently present in South San Francisco Bay by 1975, and now occurs from the Carquinez Straits and San Pablo Bay throughout the Central and South Bays, on floats, pilings, rocks, buried shells, and shells of living Atlantic Mud Snails (Ilyanassa obsoleta). It has also been found in Humboldt Bay (1988, T. Blanchard, personal communication, cited by Cohen and Carlton 1995) and Morro Bay (2005, Needles 2007; Needles and Wendt 2012). Populations of this anemone have also been reported from oil platforms in the Santa Barbara Channel (Glon et al. 2020)

As noted above, Diadumene paranaensis is apparently introduced to its type locality in Paranagua Bay, Brazil, and its native region is unknown (Glon et al. 2020).

The possibly related species, D.cincta, was regarded as an introduced species in Europe, and is also of unknown origin (Reise et al. 1999; Wolff 2005). It was first found on the south coast of England in 1925 (Stephenson 1935) and was later found from the North Sea coast of Germany to the French coast of the Bay of Biscay, and the Lagoon of Venice (Stephenson 1935; Reise et al. 1999; Occhipinti Ambrogi 2000; Wolff 2005; Nehring 2006). However, this anemone may have been overlooked because of its similarity to young Metridium senile, and historical records suggest that it was present in Europe in the 1700s, and is probably native there (den Hartog and Ates 2011).

Diadumene paranaensus was called Diadumene sp. 1 until 2015 and was treated by James T. Carlton (1979) in his dissertation as an unidentified, introduced species. Unpublished observations by D. Dunn and T. Blanchard (cited by Carlton 1979 and Cohen and Carlton 1995, respectively) suggested that it might be related to D. cincta Stephenson 1925, an anemone of unknown origin, once widely regarded as introduced to European waters. However, it was probably not that species (Cohen et al. 2005; California Academy of Sciences 2005; Robinson et al. 2011). However, Diadumene sp. 1 does correspond to a recently described species, Diadumene paranensis described from fouling communities in Paranagua Bay, Brazil (Benedi et al. 2015; Glon et al. 2020)

Diadumene paranaensus has a flat, usually circular adherent base, though the base can sometimes be irregular. The column can be very elongated and irregular before longitudinal fission, up to 2-5 4 times column width. The color is light orange, greenish, pale brown, and lighter than the column. The column is 5-20 mm in length, and 1-11 mm in width and is less than 5 mm in diameter, but occasionally specimens are 20 mm in diameter (Carlton 1979; Cohen and Carlton 1995; Fautin, in Carlton 2007; Benedi et al. 2015). The scapus, an expanded region at the top of the column, is topped by a narrower region called the capitulum located at the base of the tentacles. The capitulum is 1/4 to 1/3 as long as the scapus (Beneti et al. 2015).

The oral disk is circular and wider than the column. The lips are strongly ribbed. The oral disk is brown to orange, with white markings at the base of the tentacles. The tentacles are long, up to 80 um, and tapered towards the tip. There are 48-80, usually arranged in three cycles. The first and second cycles have about six tentacles, which are well developed. The inner cycles may be irregular and poorly developed. The tentacles are white or greenish, with brown markings. These anemones can have single or multiple catch tentacles, up to 150 mm long (Beneti et al. 2015).

This anemone has acontia, threadlike structures that are lined with cnidocytes (cells bearing nematocysts). These extend from the middle lobes of incomplete mesenteries, which partially divide the gastrovascular cavity. The acontia can be extended into the body cavity, or extruded through pores as a defense in response to disturbance or handling. Reproductive tissues are absent. This anemone often occurs in colonies because of the frequency of asexual reproduction. (Description from: Carlton 1979; Cohen and Carlton 1995; Fautin, in Carlton 2007; Beneti 2015)

Diadumene cincta
This anemone is widely distributed in northern European harbors. It was believed to be an introduced species by some authors, but is now considered to be native in Europe (den Hartog and Ates 2011).

Diadumene franciscana
This anemone, of unknown origin, is introduced to Calfiornia bays, form Tomales Bay to Mission Bay (Cohen 2005). The two 'directive' tentacles, those at the ends of the slotlike mouth, have yellowish bases, while the others are colorless or white (Cohen 2005; Fautin, in Carlton 2007).

Diadumene leucolena
This East Coast anemone has pink or salmon-colored tentacles, though the column may be almost white. The column is long and slender, when extended (Cohen 2005; Fautin, in Carlton 2007).

Diadumene lighti
This native anemone lives on the open coast, among algal holdfast, and usually has bulges and kinks in its column (Cohen 2005; Fautin, in Carlton 2007).

Diadumene lineata
This northwest Pacific anemone has a stout column, usually with a brown column, with green and orange vertical stripes.

Diadumene paraensis  frequently occurs in colonies of up to 200 individuals,  suggesting asexual reproduction. This anemone is known from estuaries and sheltered waters, where it grows on rock, mud, pilings, floats, partially buried dead mollusk shells, and living Tritia obsoleta (Eastern Mud Snails) (Carlton 1979; Cohen and Carlton 1995). In Paranagua Bay, Brazil, D. paranaensis occurs on wharf pilings, together with mussels and barnacles (Benedi et al. 2015). This anemone is reported to be tolerant to variations in temperature and salinity, although details were not given (Benedi et al. 2015). Like other anemones, it feeds by trapping zooplankton and small epibenthic animals in its tentacles (Barnes 1983).

Sea anemones of the genus Diadumene can reproduce sexually, by releasing eggs and sperm into the water, and asexually by longitudinal fission, or by a method called pedal laceration. Reproductive tissue is absent in Brazilan populations of D. paranensis (Benedi et al. 2015, while California populations are usually also seen in clonal groups, although they also occur singly (Fautin 2007). Another introduced anemone, D. lineata, reproduces primarily asexually in its introduced range (Shick et al. 1979; Ting and Geller 2000). In pedal laceration, as the anemone moves, a portion of its base is left behind and grows into a new anemone (Barnes 1983

No impacts have been reported for Diadumene paraensis.

Braber, L.; Borghouts, H. (1977) Distribution and ecology of Anthozoa in the estuarine region of the rivers Rhine, Meuse and Scheldt., Hydrobiologia 52(1): 15-20