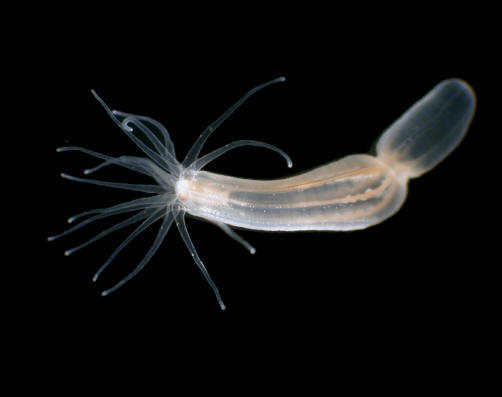 Nematostella vectensis is commonly known as the Starlet Sea anemone. It was first described from the Isle of Wight, England, but recent genetic evidence suggests that it is native to the east coast of North America. It has been introduced to England and the west coast of North America from Washington to California.  Unlike other anemones, this species does not attach to a substrate. It commonly lives buried in the sediment, with its oral disk and tentacles protruding. It is typically found in salt marshes, lagoons, and mudflats. Few economic and ecological impacts have been reported for this species. Some authors have suggested that N. vectensis could be a significant predator of oyster larvae in estuaries, but this has not been studied further.

Nematostella vectensis is a small estuarine mud-dwelling sea anemone with a somewhat enigmatic distribution. Its known range includes the south and east coasts of Britain in the Northeast Atlantic (Sheader et al. 1997; Stephenson 1935), the Northwest Atlantic from Nova Scotia to Louisiana, and the Northeast Pacific from Washington to California (Hand and Uhlinger 1994). It was first described from the Isle of Wight, England (Stephenson 1935). The limited and localized distribution of N. vectensis on the European coast (southeast England only, Norfolk to the Fleet), suggests that the English population may have been an introduction from North America, possibly brought with oysters (Crassostrea virginica, Eastern Oyster) (Sheader et al. 1997). Successful crosses of females from six locations (England, Maryland, Georgia, California, Oregon, and Washington) and males from four locations (Nova Scotia, Maryland, Georgia, and Oregon) suggest that populations from both sides of the Atlantic, and the Northeast Pacific constitute a single species. All 24 combinations tested produced viable larvae (Hand and Uhlinger 1994). Recent genetic studies indicate that populations from the southeastern United States have the highest genetic diversity, and that this anemone is native to the East Coast of North America and was introduced to the West coast and to England (Reitzel et al. 2008; Darling et al. 2009).

The potentially long-lived larvae (Hand and Uhlinger 1992) provide one obvious device for spreading populations of N. vectensis in ships’ ballast water. Another possibility is that this species has been spread with oyster transfers. Oysters have been transported widely between estuaries and oceans, and those movements could have carried the anemone between the Atlantic and the Pacific oceans, and in and out of the Gulf of Mexico (Hand and Uhlinger 1994).

On the Pacific coast, the first verified collection of N. vectensis was in Alameda County, California in 1946, although it may have been seen before this date in San Francisco and Tomales Bays (Hand 1957). It is now found in at least 11 separate estuaries, from San Francisco Bay north to Puget Sound and the San Juan Islands, Washington (by 1973, Hand and Uhlinger 1994). In San Francisco Bay, it was regarded as a cryptogenic species (Cohen and Carlton 1995), but genetic studies indicate that West Coast populations are introduced (Reitzell et al. 2008; Darling et al. 2009). West Coast populations have a higher incidence of asexual reproduction compared to East Coast populations, and two clones occur at multiple locations from Tomales Bay to the San Juan Islands (Darling et al. 2009).

In the Northwest Atlantic, the wide latitudinal distribution and genetic diversity of N. vectensis suggests native status (Reitzel et al. 2008), but the relatively recent discovery of this species in well-studied areas is puzzling. It was first found on this coast in 1939, at Woods Hole, Massachusetts by Crowell (1946). No anemone of this type was mentioned in extensive early surveys of that area (Smith and Verrill 1873; Sumner et al. 1913). Its typical habitat, in shallow marshy lagoons, is unusual for an anemone, but the site in which it was found (Mill Pond) was surveyed by Sumner et al. (1913), and probably examined occasionally by many other Woods Hole scientists. Extension of this species' range northward along the coast by oyster transplants or shipping is possible. While genetic diversity suggests a southeastern origin, records from North Carolina to Mississippi are relatively recent (1980s) (Hand and Uhlinger 1994). After N. vectensis was reported from Woods Hole in 1939 (Crowell 1946), the next published report was from the Minas Basin, in the Bay of Fundy, Nova Scotia (in 1965, Bailey and Bleakney 1966). Subsequently, it was found in many estuaries, from the Spurwink River, near Portland, Maine to Chesapeake Bay (Calder 1972; Posey and Hines 1991; Hand and Uhlinger 1994). The high genetic diversity in New England suggests limited dispersal and sporadic introductions (Darling et al. 2004).

Although N. vectensis was first described from the Isle of Wight, England (Stephenson 1935), its localized distribution (southeast England only, Norfolk to the Fleet), suggests that the English population may have been an introduction from North America, possibly brought with oysters (Crassostrea virginica, Eastern Oyster) (Sheader et al. 1997). This is supported by its low genetic diversity and the sharing of haplotypes with New England populations (Reitzel et al. 2008). In 2004, seven specimens were collected in the port of Recife, Brazil, the first collections in the Southern Hemisphere. It is not known if a population is established there (Silva et al. 2010).

Nematostella vectensis is a small burrowing anemone, found in mud and silt. It has an elongate, wormlike body, which is usually buried with only the oral disk and mouth protruding. Other burrowing anemones have a posterior section modified for digging, called a physa, and a collar below the oral region, but these are lacking in N. vectensis. It typically has 16 tentacles, but may vary from 12 to 18. The body is translucent and nematosomes (small ciliated spheres) may be seen circulating in the gut. These are unique to this genus. The eight mesenteries are also visible, as lines running the length of the body. The typical size is 10-19 mm, but it may grow larger in culture. The crown of tentacles may reach 8 mm in diameter when extended (description from: Stephenson 1935; Crowell 1946; Hand 1957; Gosner 1978; Fautin, in Carlton 2007).

Nematostella vectensis is a wormlike, burrowing animal, which commonly lives buried in the sediment, with its oral disk and tentacles protruding. Unlike most other anemones, it does not attach to its substrate. It reproduces both sexually, and asexually, by transverse fission (Hand and Uhlinger 1994; Hand and Uhlinger 1995). Sexes are separate. Females lay gelatinous egg masses and males release sperm into the water column. Fertilized eggs divide and develop into planula larvae. After four days they develop tentacle buds, and settle after about seven days (Hand and Uhlinger 1992). Nematostella vectensis is one of only five anemones known to reproduce asexually by transverse fission- most anemones reproduce asexually by longitudinal fission. This mode of reproduction means that the aboral fragment must develop a new mouth and tentacles (Hand and Uhlinger 1995). In small individuals (less than 20 mm), which are the most numerous, 5-10 eggs are typical, but larger individuals may produce up to 2,000 eggs (Hand and Uhlinger 1992; Hand and Uhlinger 1994). A number of known populations appear to consist of one sex only. Only females are known from England (Sheader et al. 1997), and San Francisco and Tomales Bay California, while recent collections from Kingsport, Nova Scotia are all males. This species appears able to sustain populations through asexual reproduction (Hand and Uhlinger 1994; Sheader et al. 1997).

Nematostella vectensis is tolerant of an extremely wide range of salinities and temperatures, from 2-52 PSU and -1.5-32.5ºC (Hand and Uhlinger 1995; Sheader 1997). Sexual reproduction in the laboratory occurred at 12-34 PSU (Hand and Uhlinger 1992). Reproductive temperatures are not known, but sexual reproduction is probably confined to the warmer parts of the year, July-August in Nova Scotia (Frank and Bleakney 1976) and February-October in England (Sheader et al. 1997). Typical habitats for N. vectensis include salt marshes, lagoons, and mudflats (Crowell 1946; Frank and Bleakney 1976; Hand and Uhlinger 1994; Sheader 1997). This anemone feeds on a wide range of small invertebrates, including hydrobiid snails, copepods, ostracods, polychaets, insect larvae, and bivalve larvae (Posey and Hines 1991; Hand and Uhlinger 1994).

Few economic and ecological impacts have been reported for this species. Hand and Uhlinger (1994) suggested that Nematostella vectensis could be a significant predator of oyster larvae in estuaries, such as Chesapeake Bay, because of its dense populations in marshes and mudflats. However, its apparent scarcity and sporadic appearance (Posey and Hines 1991) argues against a role in recruitment of oysters and other commercially important shellfish in the upper Chesapeake Bay. The importance of N. vectensis as a predator has not yet been studied in other estuaries.