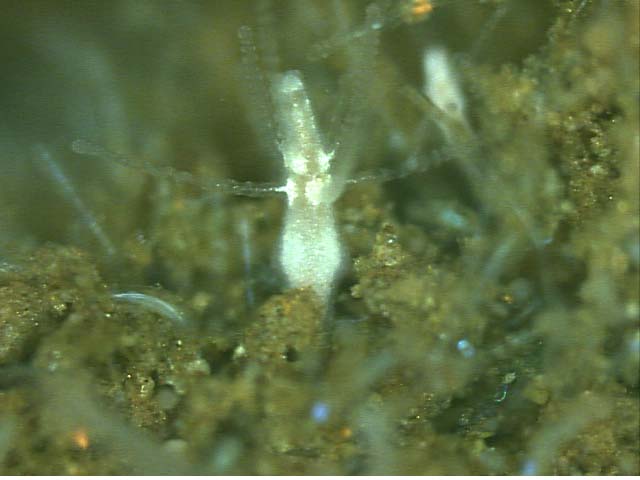 The hydrozoan Moerisia lyonsi has an epibenthic attached polyp stage and a planktonic medusa stage. It was first described from Lake Qarun, Egypt, but is extinct there now. Its native range is currently uncertain, but some authors have suggested that it may have a Ponto-Caspian origin. It has been introduced to estuaries on the U.S. East, Gulf and West coasts. The polyp stage can be found attached to vegetation, other hydroids, rocks, shells, and man-made surfaces. The medusae swim upwards and then drift downwards with extended tentacles, feeding on planktonic copepods. There are few reported impacts for this species, but at high densities it has the potential to alter planktonic food webs through predation on zooplankton.

The hydrozoan Moerisia lyonsi is only known from its type locality, Lake Qarun, Egypt (a saline lake in the Nile valley, near Cairo) and the East, Gulf and West coasts of North America (Boulenger 1908; Rees 1957; Calder and Burrell 1967). This medusa was probably introduced to Lake Qarun, as indicated by its occurrence on the introduced Ponto-Caspian hydroid Cordylophora caspia (Boulenger 1908). It is now extinct in the lake, as salinity has increased beyond its tolerance (Dumont 1999). Other species of Moerisia are known from the Caspian Sea, Japan, Hawaii, and the Mediterranean, in coastal and continental salt lakes (Calder 1971; Dumont 1994; Calder 2010). Rees and Gershwin (2000) suggest that coastal populations of Moerisia (including M. lyonsi, Lake Qarun and East and Gulf coast of US; Moerisia sp., San Francisco Bay; M. gangetica, Ganges River) may represent introductions, probably from a Ponto-Caspian source. Taxonomic studies are needed to resolve the systematics and distribution of the genus (Rees and Gershwin 2000). It is possible that M. lyonsi and other named forms represent a single, morphologically plastic species of Ponto-Caspian origin (Mills 1999), but genetic comparisons are needed (Meek et al. 2012).

In the San Francisco estuary, medusae and polyps identified as Moerisia sp. were discovered in the brackish Petaluma River, a tributary of San Pablo Bay, in 1993 (Mills and Sommer 1995), and were later found in the Napa River, another San Pablo tributary. In 1997, medusae were collected in Suisun Slough (Rees and Gershwin 2000). Extensive surveys of nonindigenous hydrozoans in Suisun Marsh, and the Napa and Petaluma rivers were made by Schroeter (2008) and Wintzer et al. (2011a; 2011b). Medusae of Moerisia were the most numerous of the three species of nonindigenous hydromedusae in Suisun Marsh, occasionally reaching densities of 100 m-3 (Schroeter 2008; Wintzer et al. 2011b). The San Francisco Bay hydrozoans have recently been found to be genetically identical to M. lyonsi from Chesapeake Bay (Meek et al. 2012).

Moerisia lyonsi medusae and hydroids were first collected in 1965-68 in low-salinity waters of the James and Pamunkey Rivers, tributaries of Chesapeake Bay (Calder and Burrell 1967; Calder 1971). Subsequent reports of the species are sparse, but hydroids of M. lyonsi were found on settling plates from Baltimore Harbor in 1995 (Ruiz et al. unpublished). In 1992-93, M. lyonsi medusae invaded an experimental mesocosm system at the University of Maryland Horn Point Laboratory, and were also collected in the adjacent Choptank River (Purcell et al. 1999; Ma and Purcell 2005a,b). Polyps have also been collected from Delaware Bay (Sandifer et al. 1974). In South Carolina, medusae of M. lyonsi were reported as abundant in most areas of low salinity (Calder and Hester 1978). Medusae and polyps invaded a shrimp aquaculture system at Charleston, South Carolina in 1973 (Sandifer et al. 1974).

Polyps of Moerisia lyonsi were found in the Bonnet Carré spillway, on Lake Pontchartrain, Louisiana in 1975, but disappeared during unusually low salinities (Poirier and Mulino 1977).

The hydrozoan Moerisia lyonsi has a small polyp stage (~1-2 mm high), and a small, but more conspicuous medusa stage (3-8 mm in diameter). The colonial polyps grow from a long, branching stolon (up to 10 mm long), which may be draped over plant detritus, colonies of the hydroid Cordylophora caspia, or shells (e.g. Ischadium recurvum, Hooked Mussel). The stolon is covered with thin perisarc, and often encrusted with detritus. The zooids are spindle-shaped, with the greatest girth below the tentacles. There are 4-16 moniliform tentacles which arise below the hypostome. Frustule-like buds (often with 1 or 2 tentacles) develop below the tentacles- they grow outward, constrict, and drop off, becoming new polyps. The hydroid can also reproduce by a form of transverse fission, where the stalk constricts and breaks up into several buds, each of which can grow into a new colony. Medusa buds develop around the base of the tentacles, or at the base of the hypostome. As the buds grow, they are attached by a short stalk, and the radial canals and tentacle buds become visible, before the medusae are released (Rees 1957; Mills and Ress 2000; Rees and Gershwin 2000).

Young medusae of M. lyonsi are bell-shaped (~ 0.5 mm in diameter) with four radial canals and short manubrium. There is a red ocellus on each tentacle bud, and a well-developed ring canal. The velum is well-developed. At about 1.1 mm, gonads start to develop. As the medusae grow, more tentacles are added, and the bell of the medusa becomes proportionately wider. Gonads extend outward, from the manubrium, along the radial canals, nearly to the ring canal. Quadrangular lips develop in larger specimens. Adult medusae had 29-64 tentacles and were 2.4-8.4 mm in diameter. (Description from: Boulenger 1908; Calder 1971; Purcell et al. 1999; Bouillon et al. 2004)


Native to Black Sea, Azov Sea, eastern Mediterranean, Brazil, and China. Moerisia polyps from Barnegat Bay were morphologically closer to M. inkermanica from Brazil and China, than Moerisia lyonsi from California and Chesapeake Bay, although they matched the Chesapeake and California forms very closely genetically (Restaino et al. 2018)., The main difference between the two species is the number of tenatcles, 4 (usually) to 16 in M. lyonsi, and 24-32 in M. inkermannica (Svhuchert 2010).

The hydrozoan Moerisia lyonsi has an epibenthic attached polyp stage and a planktonic medusa stage. The polyps are capable of asexual budding to form mobile frustules, which crawl away from the parent and grow into new polyps (Boulenger 1908; Calder 1971; Purcell et al. 1999; Ma and Purcell 2005a,b). The polyps can also form cysts during cold weather and other adverse conditions, which redevelop into new polyps when conditions improve. The cysts may be resistant to drying (Purcell et al. 1999), among other stresses. The polyps also produce medusa buds, which break off into free-swimming medusae. The rate of budding, both by polyp and medusa buds, increases with food supply (Purcell et al. 1999). Polyps grow and reproduce asexually at 10-29 ?C and 1-40 PSU salinity (Ma and Purcell 2005a). Development times of both types of buds decreases with increasing food levels, and are affected by temperature and salinity, but medusa budding is more sensitive to environmental change than polyp budding (Ma and Purcell 2005b).

Medusae tend to swim upwards and then drift downwards with extended tentacles. They do not linger near the bottom, as do the related Maeotias marginata or Craspedacusta sowerbii, or cling to vegetation, as does Gonionemus vertens. Their prey is primarily planktonic copepods. The distribution of M. lyonsi medusae in Chesapeake Bay was limited to salinities below 5-9.3 PSU, possibly due to predation by the ctenophore Mnemiopsis leidyi and the scyphomedusa Chrysaora quinquecirrha (Purcell et al. 1999; Ma and Purcell 2005a). Medusae of M. lyonsi probably have separate sexes. Fertilized eggs develop into planulae which settle on rocks, shells, vegetation, other hydroids (e.g. Cordylophora caspia), and man-made surfaces (Boulenger 1908; Barnes 1983; Calder 1971; Sandifer et al. 1974; Poirrier and Mulino 1977; Purcell et al. 1999).

Moerisia lyonsi has been introduced to several East and Gulf Coast estuaries, but available information on its abundance is limited. Field surveys from the Choptank River, Maryland found densities of medusae at 0.4-13 m-3, too low to significantly affect zooplankton populations (Purcell et al. 1999). However, in enclosed experimental and aquaculture ecosystems, M. lyonsi can reach densities where it becomes a significant predator (Sandifer et al. 1974; Petersen et al. 1998; Purcell et al. 1999).

Fisheries- The hydrozoan Moerisia lyonsi has been a pest in closed-system aquaculture tanks used to rear Macrobrachium spp. (shrimp) larvae in South Carolina. The medusae are capable of killing and/or eating decapod larvae larger than themselves (Sandifer et al. 1974). This occurrence and its spread in an experimental mesocosm system at Horn Point, Maryland (Peteren et al. 1998; Purcell et al. 1999) suggest that this species might be a pest in brackish-water aquaculture systems in the Chesapeake Bay region.

Predation- Moerisia lyonsi together with the other introduced hydrozoans in the brackish portions of the San Francisco estuary (Blackfordia virginica, Cordylophora caspia, and Maeotias marginata), has the potential to alter planktonic food webs through predation on zooplankton. Predation on fish larvae occurred, but at a very low rate, less than 1% of food composition (Schroeter 2008; Wintzer et al. 2011c). This estuary has no native brackish-water hydrozoans (Rees and Gershwin 2000).

Dumont, Henri J. (1994) The distribution and ecology of the fresh- and brackish-water medusae of the world., Hydrobiologia 272: 1-12

Kramp, P. L. (1961) Synopsis of the medusae of the world, Journal of the Marine Biological Association of the United Kingdom 40: 7-443

Ma, Xiping; Purcell, J. E. (2005a) Effects of temperature, salinity and predators on mortality of and colonization by the invasive hydrozoan Moerisia Iyonsi., Marine Biology 147: 215-224

Rees, W. J. (1957) The relationships of Moerisia lyonsi Boulenger and the family Moerisiidae, with captitate hydroids, Proceedings of the Zoological Society of London 130: 537-543