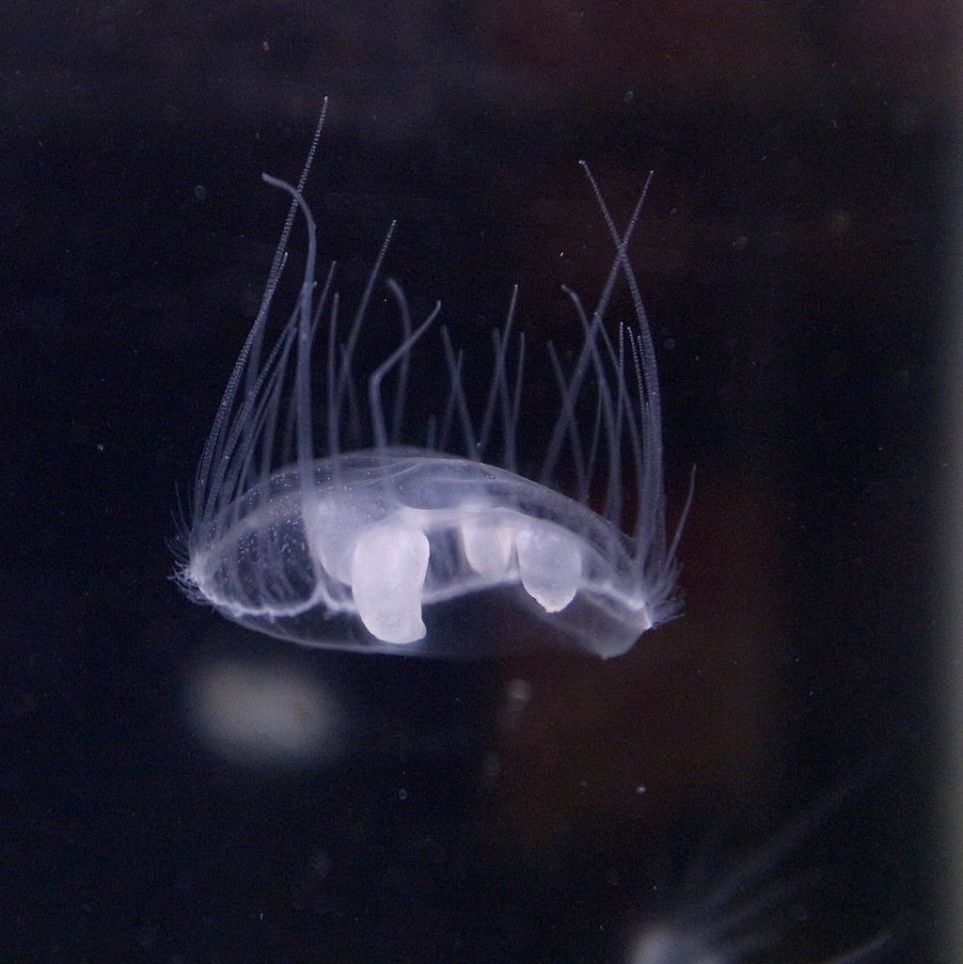 Craspedacusta sowerbii is a freshwater hydrozoan with a conspicuous medusa stage. It is believed to be native to the Yangtze Valley, China, but the medusa was first described from a water-lily tank in Regent's Park, London in 1880. Since then, it has been introduced to every continent except Antarctica, presumably with shipments of aquatic plants. In North America, it was first recorded in 1885 in Pennsylvania, but has since been reported from 150+ localities, with more occurrences in the east (New Brunswick, Quebec, and Ontario to Florida) than in the west. It occurs frequently in aquaria, but also in artificial and natural ponds, reservoirs, backwaters and pools of rivers. The hydroids grow on rocks, sticks and vegetation. There are no reported ecological and economic impacts of C. sowerbii.

The hydrozoan Craspedacusta sowerbii is believed to be native to the Yangtze Valley, China (Acker 1976; Dumont 1994), but the medusa was first described from a water-lily tank in Regent's Park, London in 1880 (Lankester 1880). Craspedacusta sowerbii has since been introduced to every continent except Antarctica, presumably with shipments of aquatic plants (Dumont 1994). Appearances of the medusae tend to be sporadic, but well-established populations also occur frequently in aquaria (Schmitt 1939; Naumov 1969), artificial ponds, reservoirs, natural ponds, and backwaters and pools of rivers (DeVries 1992; Dumont 1994). Polyps are probably more widespread than medusae, since medusa production appears to be sporadic (Acker and Muscat 1976; Duggan and Eastwood 2012). Craspedacusta sowerbii does not tolerate salinities above 1-3 PSU (Fleming and Hazelwood 1967; Dumont 1994), but does occur occasionally in tidal freshwaters.

In North America, C. sowerbii has been reported from 150+ localities, with more of the occurrences in eastern North America (New Brunswick, Quebec, and Ontario to Florida) than in the west (Schmitt 1939; DeVries 1992; Dumont 1994; McAlpine et al. 2002; USGS Nonindigenous Aquatic Species Program 2011). It was first reported in 1885 in Pennsylvania (Potts 1897), and has spread rapidly, but in a spotty fashion with new appearances in isolated locations, rather than a steady spread along river drainages (Schmitt 1939; DeVries 1992; Lytle 1982). It was first recorded from the Great Lakes Basin in 1933 and the Hudson Basin in 1943 (Mills et al. 1993; Mills et al. 1997).

In August 1884, hydroids of C. sowerbii, budding off medusae, were collected in Tacony Creek, a nontidal Delaware River tributary outside Philadelphia, Pennsylvania (Potts 1897). Craspedacusta sowerbii spread rapidly in eastern North America, with medusae appearing in Washington, DC (no specific location given) in 1907, but quickly disappearing (Hargitt 1907). In the Chesapeake Bay watershed, medusae were found in many locations, some within a few miles of tidal waters, but none definitely reported from tidal waters (Schmitt 1939; Allan 1952; Rice 1958; Grogan 1989; Turek 1992). In the Hudson River basin, C. sowerbii was first collected in 1943, and is known from several widely scattered nontidal lakes (Mills et al. 1997). In the Delaware River, medusae were collected in tidal freshwater in May-June 1978, at Trenton and Burlington New Jersey, but were not abundant (Howells 1981). In South Carolina, in the Santee and Ashepoo Rivers, polyps were collected on submerged logs in tidal fresh waters in 1974 (Calder 1976; Calder and Hester 1978). Medusae have been reported from coastal watersheds from Maine to Florida and Texas, so other occurrences in tidal waters are possible (USGS Nonindigenous Aquatic Species Program 2011).

As noted above, C. sowerbii is considered native to the Yangtze Valley, China. It is presumed to have evolved, with three other Asian species of Craspedacusta, from a marine ancestor from the Northeast Pacific (Dumont 1994). This hydrozoan has a remarkable record of human invasions, probably due to its desiccation-resistant frustules and inconspicuous polyps. Its discovery with Amazon water-lilies (Victoria regia) in Regent's Park, UK in 1880 indicates the importance of aquatic plants as a vector (Lankester 1880). Because the polyps are easily overlooked, and the production of medusae is sporadic, it is likely that this species was introduced to Europe much earlier (Dumont 1994). Often, as in South America (in 1930, Dumont 1994) and Israel (in 1961, Gasith et al. 2011), the first observation has been in aquaria, followed by occurrences in outdoor bodies of water. First records in Japan and Australia happened soon after World War II, probably due to transport with military equipment. Shipping or construction equipment might account for its occurrence in the Gatun Lake, in the Panama Canal (in 1924, USNM 42199, US National Museum of Natural History 2011). After initial introductions, C. sowerbii spreads rapidly, probably by many human vectors, including freshwater boating and shipping, stocking of fishes, machinery and tools used in freshwater, aquatic plants, and probably dispersal by birds (Dumont 1994). Even in long-invaded continents, such as Europe and North America, recent new records in bodies of freshwater are numerous (e.g., Dumont 1994; McAlpine et al. 2002; Oscoz et al. 2009; USGS Nonindigenous Aquatic Species Program 2011).

Craspedacusta sowerbii is the only hydrozoan that both widely occurs in freshwater around the world and possesses a conspicuous medusa stage. The hydroid is small, obscure, and easily overlooked (Slobodkin and Bossert 1991; Dumont 1994). This species is primarily known from lakes and ponds, but is occasionally reported from tidal freshwater (Calder 1976; Howells 1981; Light et al. 2005). Medusae can survive for a while at salinities as high as 3 PSU, but shrink markedly above 1.2 PSU (Fleming and Hazelwood 1967; Dumont 1994).

The hydroids of C. sowerbii are solitary or occur in small joined clusters of up to 12 polyps, which are linked by a short stolon. The polyps are vase-shaped, tapering towards the mouth, and have no tentacles, having only nematocysts surrounding the mouth of the polyp. They have no hydrotheca and their gonophores also lack a gonotheca. The gonophores are bulb-like swellings in which the medusa develops and from which it eventually emerges. Each polyp is ~ 1 mm long, but can contract to about half this size, or extend to about 2 mm. The polyps can reproduce asexually, by budding at their base. They can also bud off frustules, which separate from the colony and grow into new polyps. Under stress, such as cold or starvation, the polyps can shrink to a resting body - a ball of cells (description from: Acker and Muscat 1976; Slobodkin and Bossert 1991).

Craspedacusta sowerbii medusae have a bell, in the form of a somewhat flattened hemisphere, with four radial canals, a long quadrangular manubrium projecting below the bell, and ending in four slightly folded lips. The gonads are oval sacs, with folds facing the radial canals. The marginal canal is either very small or obliterated. There are four large tentacles at the termini of the radial canals, and up to 400 smaller tentacles with marginal vessels between each pair of large tentacles. Ocelli (eyespots) are absent. The tentacles have prominent rings of nematocysts along their entire length. The medusae range from 5 to 15 mm in diameter (description from: Lankester 1880; Slobodkin and Bossert 1991; Mills et al., in Carlton 2007).

The sexual medusa stage of Craspedacusta sowerbii was first described in 1880 (Lankester 1880), but the small solitary asexual hydroid, first described as Microhydra ryderi, was not recognized as a life stage of the same species until 1928. This introduced species is the only medusa in North America to live in pure freshwater (Slobodkin and Bossert 1991).

Medusae are most frequently found in sheltered waters in ponds or lakes. In rivers, they often occur in pools or backwaters (Schmitt 1939; Acker and Muscat 1976). Occurrences in tidal waters are rare (Howells 1981), and the medusa shrinks at salinities above 1.2 PSU, and does not tolerate salinities above 3 PSU (Fleming and Hazelwood 1967). Medusae are released by gonophores on the polyps which bud and mature. In culture, medusae are most often produced at 19-30⁰C and at high levels of food. However, in culture, and in ponds and lakes, medusa production is highly unpredictable, so additional factors are likely involved (Acker and Muscat 1976). Buds take 4-13 days to grow on the polyp. In one lake, the released medusae took about five weeks to mature, reaching 15-20 mm in diameter. A puzzling feature of the biology of this species is that often, in a body of water, all of the medusae are of one sex and the two sexes are rarely found together (Rice 1958; Acker and Muscat 1976), suggesting that successful sexual reproduction is scarce. When it does occur, fertilized eggs develop into a ciliated blastula, which is released and develops into a planula, which settles and metamorphoses into a polyp (Acker and Muscat 1976).

The hydroids of C. sowerbii grow on rocks, sticks and vegetation. According to Acker and Muscat (1976), they do not survive heavy sedimentation, but in Lake Erie, Hubschmann and Kishler (1972) found them thriving under ~5 mm of sediment, while growing in depressions in limestone boulders at 2.4-9 m depth. The polyps lack tentacles, but use their nematocysts around the mouth to capture zooplankton or epibenthos. The colonial pattern of growth permits several polyps to attack the same prey. During periods of adverse conditions, the polyps degenerate into frustules or resting bodies. Resting bodies are produced at temperatures of 6-10⁰C, and can tolerate temperatures as low as 4⁰C (Acker and Muscat 1976; Slobodkin and Bossert 1991). The salinity tolerances of the polyps and resting bodies are not known, but they have not been reported from water with appreciable salinity.

Craspedacusta sowerbii is widespread in lakes, ponds, and occasionally in rivers, but has rarely been reported from estuaries. The medusa stage has been found in small numbers in the tidal fresh Delaware River, the Ashepoo and Santee Rivers (South Carolina), the Willamette River (Oregon), and the Sacramento-San Joaquin Delta (California) (Schmitt 1939; Calder 1976; Howells 1981; Light et al. 2005). The polyps are probably much more widespread, but they are easily overlooked, whereas freshwater jellyfish arouse much public interest (Duggan and Eastwood 2012). There are no reported ecological and economic impacts of C. sowerbii.

In lakes and ponds, the chief impact is public curiosity. They don't sting swimmers, but have been reported to injure Goldfish fins (Schmitt 1939). 'As a potential competitor with other zooplanktivores, C. sowerbii medusae are not likely to be important; because in the systems that have been studied, they only consume 0.1-10% of the daily Daphnia production' (Dodson and Cooper 1976, cited by DeVries 1992). Polyps do not appear to significantly affect zooplankton populations either (DeVries 1992).

Allan, Philip (1952) Craspedacusta sowerbii in Maryland, Proceedings of the Biological Society of Washington 65: 109

Dumont, Henri J. (1994) The distribution and ecology of the fresh- and brackish-water medusae of the world., Hydrobiologia 272: 1-12

Kramp, P. L. (1961) Synopsis of the medusae of the world, Journal of the Marine Biological Association of the United Kingdom 40: 7-443

Rice, Nolan E. (1958) Occurrence of both sexes of the fresh-water medusa, Craspedacusta sowerbiiLankester, in the same body of water., American Midland Naturalist 59(2): 525-526