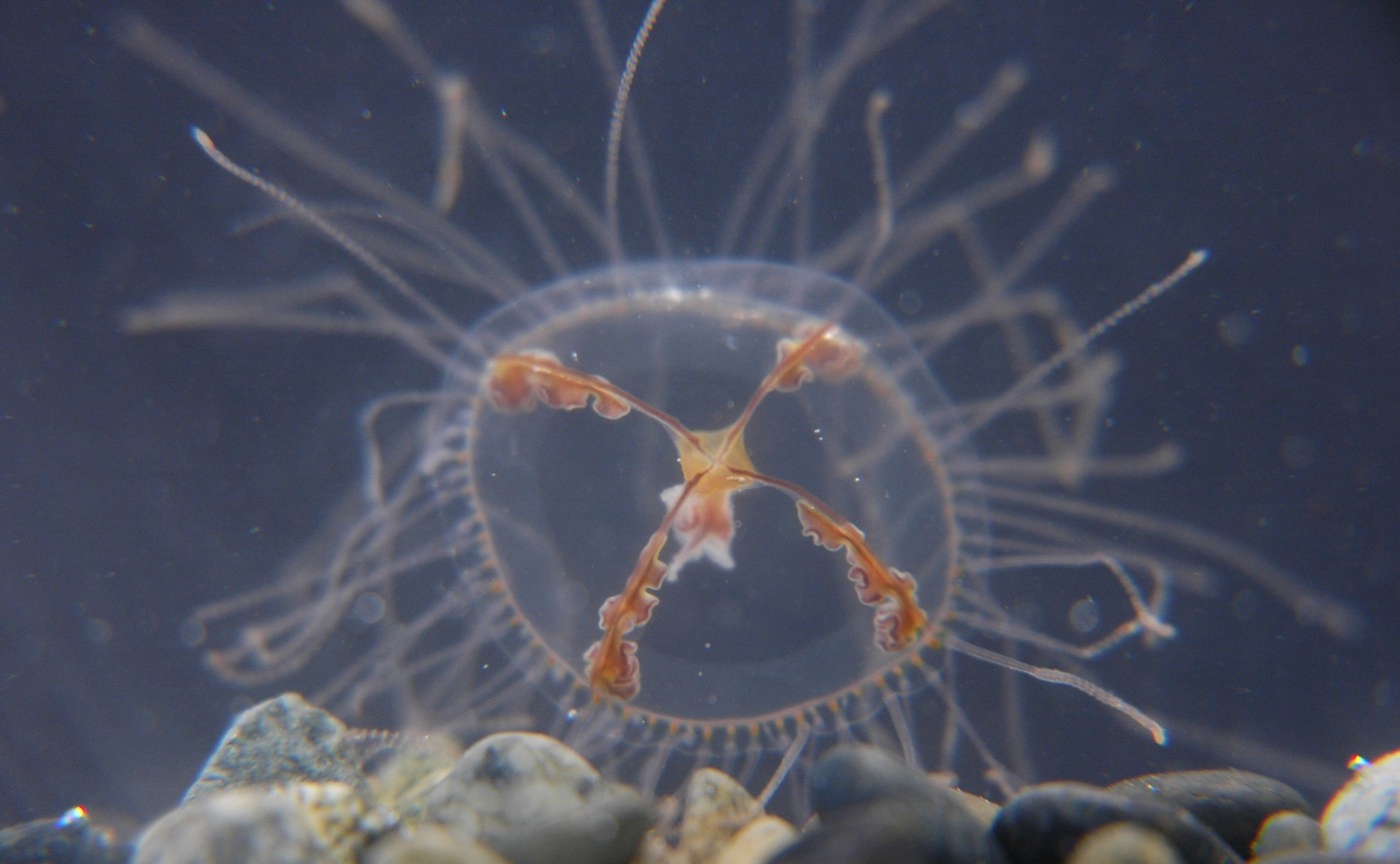 The hydroid Gonionemus vertens, commonly known as the Clinging Jellyfish, has a small, solitary polyp stage, but a conspicuous medusa stage. It is native to the North Pacific, from Vietnam to the Sea of Okhotsk in the Western Pacific, and Puget Sound to the Aleutian Islands in the Eastern Pacific. Introduced populations have been reported from Southern California, Massachusetts, Connecticut, Europe and the Mediterranean Sea. The tiny polyp stage occurs among benthic debris and algae on rocks, shells, and vegetation. The medusa stage is often found clinging to eelgrass or other vegetation during the day and swimming in the water column at night. It has a potent sting and can cause muscle cramps, chest tightness and swollen throats in people who are stung. This jellyfish is not likely to be abundant in areas heavily used by swimmers, but could affect casual waders and people gathering shellfish near eelgrass beds.

Gonionemus vertens is native to the North Pacific, from Vietnam to the southern Sea of Okhotsk in the Western Pacific, and from Puget Sound, Washington to the Aleutian Islands in the Eastern Pacific (Edwards 1976; Naumov, in Golikov et al. 1976; Mills et al. in Carlton 2007). Asian populations are reported to cause more severe stings, both as polyps and medusae, than those on the Pacific coast of North America (Edwards 1976). Edwards noted considerable local variation in morphology of medusae, but considers this to be environmental or genetic differences at the sub-specific level. It is possible that several cryptic species are present over its broad Pacific range. Medusae of G. vertens appeared suddenly in 1894 in Woods Hole, Massachusetts near the Marine Biological Laboratory, and then appeared in a number of lagoons and harbors in Europe, often near marine laboratories. This hydrozoan is prone to sporadic 'blooms' of medusae, followed by disappearances, while its polyp phase is easily overlooked – hence Edwards (1976) title, 'A study in erratic distribution'.

On the West coast, a population of G. vertens was found in a lagoon on the campus of the University of California at Santa Barbara, far south of its normal range, first appearing in 1965 (Edwards 1976).

In 1894, G. vertens appeared in the Eel Pond lagoon, adjacent to the Marine Biological Laboratory in Woods Hole, Massachusetts, where it had not been seen previously. It was subsequently found in eelgrass beds (Zostera marina) in surrounding locations, including Hadley Harbor in the Elizabeth Islands, Vineyard Haven, and Muskeget Island (Mayer 1910; Sumner et al. 1913a). The medusa was also collected in Noank, Connecticut in Long Island Sound (Mayer 1910). It became a frequent experimental animal at Woods Hole, but disappeared after a massive, widespread, eelgrass die-off in 1931. Edwards (1976) considered it extinct on the East Coast, but Gosner (1978) noted it as 'erratic' since the 1930s. Recently, this medusa has re-appeared in tidal salt ponds on Cape Cod and Martha’s Vineyard, where it stung researchers. In 2006, G. vertens was discovered in Farm Pond, Martha's Vineyard, and later in Menemsha Pond (Friends of Farm Pond 2012). In 2010, it was found in Sedge Lot Pond, adjacent to Waquoit Bay in Mashpee (Kehrl 2011). Gonionemus vertens appears on a checklist for Cobscook Bay, Maine, but no details are provided (Trott 2004). Edwards (1976) suggests that a possible vector for this hydrozoan was shellfish research by the US Fisheries Commission, which included rearing and stocking of Pacific Clams (Protothaca staminea), or more likely, oysters from Europe, possibly including the 'Portuguese' Oyster (Crassostrea angulata), with which the polyp could have been carried from Asia. Ballast water or hull fouling is less likely, as they could not account for the highly localized distribution on the East Coast. In June, 2016, several specimens of G. vertens were discovered in New Jersey estuaries, in Shrewsbury River, Manasquan Bay, and Barnegat Bay (Goldman 2016; Gaynor et al. 2016). Genetic barcoding indicated that these specimens were a close match with G. vertens from China (Gaynor et al. 2016). Severe stinging, due to this jellyfish, has not been reported in New Jersey, to our knowledge.

The recent occurrence, since the 1990s, of severely stinging G. vertens in Martha's Vineyard and Waquoit Bay waters may represent a cryptic invasion of the more severely stinging Northwest Pacific form of this hydrozoan (Govindarajan and Carman 2015).

In Europe, Gonionemus vertens medusae were first reported in aquaria at Dove Marine Laboratory, in Cullercoats, on the North Sea coast near Scotland (in 1913, Edwards 1976). There have been many subsequent records, many of them from aquaria in marine laboratories or private homes, but these often contained stones gathered from nearby shores. Several of the laboratories had been engaged in oyster research (Edwards 1976). Elsewhere in Europe, G. vertens medusae (and later, polyps) were found in 1929 at Callot, France, near Roscoff in Brittany (Teissier 1965, cited by Edwards 1976), again in an area of heavy oyster cultivation. Other appearances in Europe were at Ostend, Belgium in 1946; the island of Sylt, Germany in 1947; the Rammekenshoek creek, near Middelburg, the Netherlands in 1960; and Lake Grevelingen, the Netherlands (Edwards 1976; Bakker 1980; Wolff 2005). Further north, medusae were found in the Oslofjord, Norway in 1921; the Gullmar Fjord, Sweden in 1930; and the more northern Hardangerfjord, Norway in 1958 and Trondheimsfjord, Norway in 1969 (Tambs-Lyche 1964; Edwards 1976; Hopkins 2002). Gonionemus vertens appeared in the outer Baltic at Frederikshavn, Denmark in 1960, but did not become established (Edwards 1976; Jensen and Knudsen 2005). In the Mediterranean, there are some early records, from 1876 to 1950, from the French coast and Adriatic (Edwards 1976; Bouillon et al. 2004), but we have not found more recent reports and are uncertain of its establishment. Edwards (1976) considered oyster culture, particularly the 'Portuguese' oyster (C. angulata), introduced from Asia in the 16th-17th century, to be the likeliest vector for the introduction of this hydrozoan to Europe.

In September 2008, medusae of G. vertens were found in an aquarium filled with benthic organisms collected near Mar de Plata, Argentina, the first record of this hydrozoan in the Southwest Atlantic. Shipping is the likely vector of this introduction (Rodriguez et al. 2014b).

In June 2016, G. vertens was found in the Berre Lagoon on the Mediterranean coast of France. In July 2017, this jellyfish was associated with severe stinging of swimmers, including several cases of anaphylactic shock. Environmental restoration of the lagoon, including the recovery of Eelgrass (Zostera marina) may have favored the establishment of G. vertens. Past pollution may have also contributed to abnormalities in the medusae (Marchessaux et al. 2017).

Gonionemus vertens (Clinging Jellyfish) is a hydrozoan with a small, solitary polyp, but a conspicuous medusa stage. The polyp is rounded, with a conical hypostome and 4 to 6 tentacles. The base of the polyp lacks hydrorhizae (rootlets, for attachment). The polyp is often embedded in detritus, or clinging to the substrate with its tentacles. It produces creeping, mobile frustules (which develop into new polyps) or medusae by budding from the lower part of the hydranth. The polyps can also degenerate into cysts. The polyp is less than 1 mm in height.

The medusa has a flattened hemispherical umbrella, with a nipple-shaped manubrium, and four radial canals. The manubrium ends with four folded lips, just inside the opening of the umbrella. The gonads form folded sacs, following most of the length of the marginal canals. The medusa has 60-80 tentacles, each sharply bent at the tip, and bearing an adhesive pad. Medusae are up to 20 mm (rarely to 40 mm) in diameter. The gonads are orange, brownish orange, or reddish, while the umbrella is golden-brown, and the tentacle bulb has a brilliant emerald-green spot. They cling to vegetation, such as eelgrass or seaweeds during bright daylight, but may swim to the surface at night or on cloudy days. A frequent mode of swimming in G. vertens (and the source of the species name) is pulsing towards the surface, flipping near the surface, and then sinking upside down with tentacles extended (description from: Edwards 1976; Naumov in Golikov et al. 1976; Gosner 1978; Bakker 1980; Bouillon et al. 2004; Mills et al., in Carlton 2007). Gonionemus 'vertens' may be a species complex, with animals from the Northeast and Northwest Pacific differing in small details of morpholgy, and notably, in the strength and toxicity of stinging. Earlier records in New Eng;lnd and Europe, classified as G. vertens or G. murbachi were not associated with severe stings. Recent appearances in Massachusetts, New Jersey, and Sweden have been associated with a strong-stinging form genetically related to Chinese (Yellow Sea, Bohai Sea) medusae (Govindarajan et al. 2016, 2917, 2018)

Gonionemus vertens has a small, inconspicuous hydroid stage and a semi-planktonic medusa stage. The tiny hydroid (~1 mm in diameter) apparently occurs among benthic debris and algae on rocks, shells, and vegetation. It presumably feeds on small zooplankton or epibenthos. As it grows, it buds off creeping frustules, which move away and develop into new polyps and medusae (Edwards 1976; Naumov in Golikov et al. 1976; Bouillon et al. 2004; Mills et al., in Carlton 2007). Polyps may reproduce asexually for long periods of time, without producing medusae, and then suddenly produce jellyfish blooms, as has been noted for the related Freshwater Jellyfish Craspedacusta sowerbii (Acker and Muscat 1976).

The medusae are released at about 1.5 mm in diameter. By day, at least in bright daylight, they cling to Eelgrass (Zostera marina) or other vegetation, and swim in the water column by night, swimming to the surface, and drifting down with spread tentacles, to catch zooplankton. The medusae shed eggs, which settle on the bottom and develop into polyps (Edwards 1976). Little information is available on the temperature and salinity requirements of this hydrozoan, but it has not been reported from strongly brackish habitats.

After its appearance in Woods Hole, Massachusetts (MA) in 1894, until its disappearance in the 1930s, Gonionemus vertens was a frequent experimental animal for embryological and other research, and for teaching (Edwards 1976). After its reappearance in MA salt ponds, from 2006 on, its major impact has been stinging researchers, and in at least one case, causing serious health symptoms.

Health- Gonionemus vertens has stung researchers working in Farm Pond, Martha's Vineyard, MA (Friends of Farm Pond 2012), and Sedge Lot Pond (part of Waquoit Bay), in Mashpee, MA (Kehrl 2011). Some of these people suffered muscle cramps, chest tightness, and swollen throats, and received hospital treatment (Kehrl 2011). This jellyfish is not likely to be abundant in areas heavily used by swimmers, but could affect casual waders and people gathering shellfish near eelgrass beds. The occurrence of severely stinging G. vertens may be due to a cryptic invasion of the more venomous Northwest Pacific form of this hydrozoan (Govindarajan and Carman 2015).

Edwards, C. (1976) A study in erratic distribution: the occurrence of the medusa Gonionemus in relation to the distribution of oysters, Advances in Marine Biology 14: 251-284