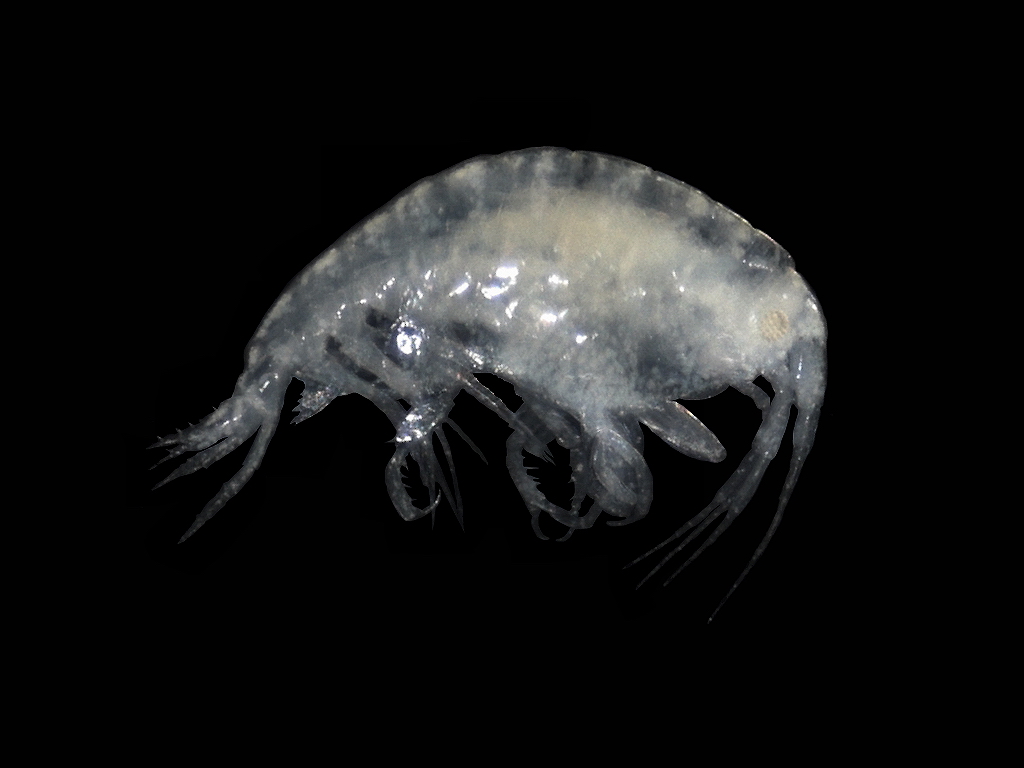 Stenothoe valida is a small marine amphipod. It was described from Rio de Janeiro, Brazil, but populations are known from warm-water ports around the world, making its native range difficult to determine. Relatively recent records from Hawaii and California are believed to be introductions. Records from the East Coast of North America are considered cryptogenic (i.e. of unknown origin) because it closely resembles a native amphipod species and could have been easily overlooked historically. It is commonly associated with hydroids, algae, and other fouling organisms, on docks, floats, buoys, and ships’ hulls.

Image Credit: Hans Hillewaert, licensed under CC BY-SA 4.0 via Wikimedia Commons. Please note that the image is of the congeneric Stenothoe marina, not S. valida.

Stenothoe valida was described from Rio de Janeiro, Brazil by Dana in 1853. This amphipod was found and named by Costa in Naples, Italy, in the same year, and later recorded from many warm-water ports around the world (Barnard 1953). The small size of the animal, and the diversity and taxonomic difficulty of the genus, means it has been frequently overlooked, and its native range is unknown. Its known range includes both sides of the North Atlantic (Colombia to North Carolina; Senegal to southern England, Fox and Bynum 1975; Lincoln 1979; Hirayama 1988; US National Museum of Natural History 2011); the Mediterranean Sea (Bellan-Santini et al. 1993); Brazil; South Africa (Hirayama 1988); the Indian Ocean (Ledoyer 1967; Sivaprakasam 1969); the Northwest Pacific (Japan and Korea, Hirayama 1988; Kim and Kim 1991); and the Southwest Pacific (New Guinea, Australia, New Zealand, Chilton 1924; Atlas of Living Australia 2015).

Stenothoe valida has apparently extended its range northward in recent years. In the North Sea, it was collected on submerged shipwrecks off Belgium in 2005 (Zintsen et al. 2008) and on floating seaweed at the island of Helgoland, Germany in 1998 (Franke and Gutow 2003). On the coast of New England, in 2000-2013, S. valida was recorded in Buzzards Bay and the Gulf of Maine (MIT Sea Grant 2000-2008; Wells et al. 2014). This amphipod may have been overlooked, due to its similarity with the native S. minuta (Bousfield 1973), so we do not currently consider it introduced here.

Chilton (1924) reported a collection of Stenothoe valida from the Hawaiian Islands. Followed by a report from Barnard (1970) of S. valida specimens collected from transplanted black coral (Antipathes irregularis) in deep water off Oahu, which showed some atypical features. More definite records are from 1996 in Pearl Harbor; 2000 in Kaneohe Bay (Coles et al. 2002a); and 2002 in Molokai, Kauai, and Maui (Coles et al. 2004). Stenothoe valida is now well-established around the Hawaiian Islands. In 1997, it was found in the lagoon of Midway Island (Defelice et al. 1998).

The family Stenothoidae is distinguished by having coxal plates 2-4 greatly enlarged, covering the basal segments of most of the appendages. The abdomen is flexed downward. They are sometimes called 'seed-amphipods', for their laterally-compressed elliptical shape. The eye is relatively large. Antenna 1 is less than 1/2 body length and is slightly longer than Antenna 2.

In Stenothoe valida, Gnathopod 2 is larger than Gnathopod 1 in the female, and is sexually dimorphic, but does not differ greatly in size. Gnathopod 1, in both sexes, has segment 4 (merus), reaching the distal end of segment 5 (carpus). In the male, segment 6 (the propodus) has a large tooth, adjacent to a deep excavation near the insertion of segment 7, the dactyl. The palm and the opposing surface of the dactyl are both densely covered with setae. The female's Gnathopod 2 lacks the large distal tooth, the excavation, and has only a few, short setae on the palm. In the female, coxa plate 2 is much larger than in the male. Pereiopods 5-7 have segment 4 (merus) enlarged, with a curved, blade-like postero-distal tip. Uropod 1 extends beyond Uropod 2 and is lined with short, fine comb-like spines. Both Uropods 1 and 2 are biramous. Uropod 3 has a thick peduncle, shorter than the single 2-segmented ramus. The distal end of segment 1 bears a spine facing outward; segment 2 resembles a thick-tapered spine. The telson is oval, with 3-4 pairs of marginal spines. Adults are 4-6 mm in size. Description based on: Barnard 1953, Hirayama 1988, Bellan-Santini et al. 1993, Chapman 2007, LeCroy 2011; Lincoln 1979; Krapp-Schickel 2013, and Krapp Schickel 2015). Krapp-Schickel (2015) suggests that S. valida is very likely a complex of closely related species/

Stenothoe gallensis complex
Described from the Indo-Pacific, now widely distributed in the Atlantic, introduced to Hawaii and New Zealand (Bellan-Santini et al. 1993; Carlton and Eldredge 2009; LeCroy 2011). The species-complex contains at least 8 named species, several of which occurin both the Indo-Pacific and Atlantic (Krapp-Schickel 2015)

Stenothoe valida is a small marine gammaridean amphipod, usually associated with fouling communities, fouling organisms such as sponges and tunicate, corals, algae, or seagrasses (Lewis 1992; Lecroy 2011; Krapp-Schickel and Vader 2015). Sexes are separate, the young are brooded and development is direct (Bousfield 1973). Females in Barbados carried 10-20 eggs. Juveniles actively swam and walked, while adults tended to be more sedentary, staying in cavities and barnacle shells, defending these territories (Lewis 1992).

Stenothoe valida is known from cold-temperate to tropical climates, and polyhaline to euhaline salinities (Lincoln 1979; Hirayama 1988; Cohen et al. 2005). This amphipod tends to be strongly associated with live or dead sessile organisms that provide refuge. In Los Angeles Harbor, it was found among colonies of the hydroid Ectopleura crocea (Barnard 1953), while in Humboldt Bay, it was found around mussels (Mytilus trossulus) and tunicates. Other hosts include the hydrozoan coral Millepora complanata and empty barnacle shells in Barbados; seagrasses and sponges in Florida (LeCroy 2011); and floating seaweeds in the North sea, Germany (Franke and Gutow 2003). Stenothoe valida is common in dock, buoy, and ship fouling (Woods Hole Oceanographic Institution 1952; Carlton 1979).  It is a suspension feeder - animals sit in place, with uropods pressed against a surface and the body pointed upward at a 30-degree angle, with the antennae and gnathopods in motion, and periodically wiped across the mouthparts (Lewis 1992).

No impacts have been reported for Stenothoe valida throughout its range.

Christodoulou, Magdalini; Paraskevopoulou, Sofia; Syranidou, Evdokia; Koukouras, Athanasios (2013) The amphipod (Crustacea: Peracarida) fauna of the Aegean Sea, and comparison with those of the neighbouring seas, Journal of the Marine Biological Association of the United Kingdom 93(5): 1303-1327

Krapp-Schickel, Traudl; Vader, Wim (2015) Stenothoids living with or on other animals (Crustacea, Amphipoda), Zoosystematics and Evolution 91(2): 215-246

Sivaprakasam, T. E. (1969) Notes on some amphipods from the south east coast of India, Journal of the Marine Biological Association of India 9: 372-383