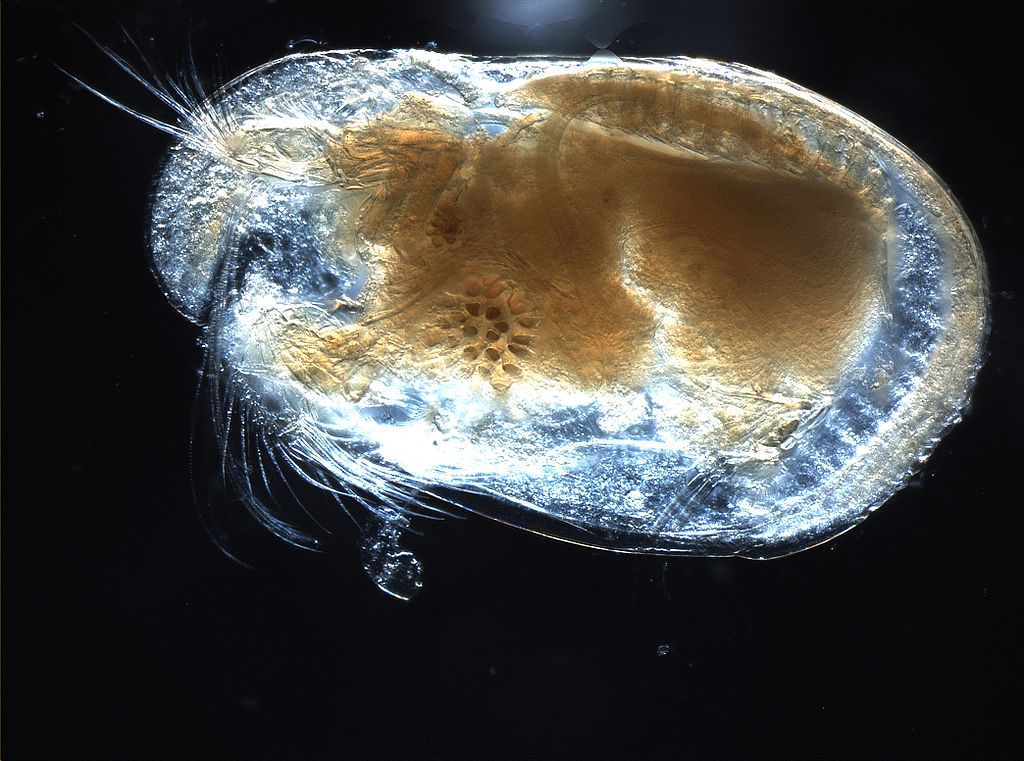 Eusarsiella zostericola is a free-living benthic ostracod. It is native to the East Coast of North America (Nova Scotia to Texas) and has been introduced to California, Washington, England, and the Netherlands. The most likely vector for its introduction is historical transplants of Eastern Oysters (Crassostrea virgnica) from East Coast estuaries. It occurs in coastal marine and estuarine habitats including eelgrass beds, oyster beds, and unstructured sediments such as mud and sand. There are no known ecological and economic impacts of this species.

Image Credit: Anna Syme via the GNU Free Documentation License and en.wikipedia. Please note this is a general ostracod image and not E. zostericola.

Eusarsiella zostericola is native to the East Coast of North America, where it extends from Nova Scotia to Texas. It has been introduced to San Francisco Bay, California (CA); Humboldt Bay, CA; and Willapa Bay, Washington (WA) (Kornicker 1975; Cohen et al. 2001; California Department of Fish and Wildlife 2014); as well as, several British estuaries on the English Channel (Kornicker 1975; Bamber 1987) and in the Netherlands (Faasse 2013). The likeliest vector for introduction in each of the above instances are transplants of Eastern Oysters (Crassostrea virgnica), from East Coast estuaries to the West Coast and Europe, in the late 19th and early 20th centuries (Kornicker 1975). The small size of these ostracods (1.0-1.5 mm) has probably contributed to their late discovery. Benthic ostracods have limited swimming ability and are rare in ballast water samples (e.g., Carlton and Geller 1993).

Eusarsiella zostericola was first collected off Point Richmond, San Francisco Bay, CA in 1953, and was initially identified as a new species, Sarsia tricostata. The San Francisco Bay specimens were later found to be conspecific with the East Coast E. zostericola (Kornicker 1967; Kornicker 1975). It is widespread and common to abundant in the South, Central, and San Pablo Bays (Foss 2009; Peterson and Vaysierres 2010) but rare in the Delta (Light et al. 2005). As noted above, it was probably introduced with Eastern Oysters in the late 19th century (Kornicker 1975). In 1999 and 2000, it was collected in Willapa Bay, Washington (Wilson and Partridge 2007; Cohen et al. 2001). In 2011, four specimens were collected in Humboldt Bay, CA (California Department of Fish and Wildlife 2014). Both bays were sites of historical Eastern Oyster transplants.

Eusarsiella zostericola was collected in England at the Blackwater River estuary in 1967 (Kornicker 1975). It was later collected from Kingsnorth Power Station, on the River Medway, in 1980 (Bamber 1987). In 2012, it was found in the Thames Estuary and west to the Isle of Wight (D.J. Horne, personal communication, cited by Faasse 2013). In 2012, this ostracod was collected in the Oosterschelde estuary, in the Netherlands. Local culture and transplants of mussels and oyster are likely vectors for the transport of E. zostericola (Faasse 2013).

In the order Myocopida, to which Eusarsiella zostericola belongs, notches in the anterior margin of the valves permit the antennae to protrude. The soft body, inside the carapace, consists of a somewhat rigid head capsule, with a labrum and lip, an indistinct thorax, and an unsegmented (or poorly segmented) trunk. There is a small median naupliar eye, anterior to a pair of compound lateral eyes. There are 7 paired limbs in Eusarsiella. Antenna 1 is uniramous. Antenna 2 is adapted for swimming, has a large muscular protopod, and a long exopod with 9 segments, and a small endopod with 1-3 segments. The body terminates in a large furca, anterior to the anus, and ending in prominent claws. Description based on Barnes 1983 and Cohen et al. 2007.

The sexes of E. zostericola are strongly dimorphic. Females are oval, lacking a rostrum, with a posteroventral process and 3 lateral ribs radiating from a hub forward of the center. The posterior rib terminates in a knob with two small lateral pits. A narrow smooth ridge parallels the valve margin. The valve margins have rows of long hairs. Antenna 1 has a 2nd segment with a spinous dorsal seta, a 3rd segment without a ventral seta, and a 4th segment with 3 ventral seta. The endopodite of Antenna 2 of the female has a single joint with 2 proximal seta and a short terminal spine. The female 7th limb has 6 terminal setae and 4-6 proximal setae. The furca does not have secondary claws between the primary claws. Adult females range between 1.1 and 1.6 mm in size, while adult males range between 1.1 and 1.3 mm. Males have a more elongated body, somewhat resembling a lemon, in lateral view, with a small rostrum, and a slight posteroventral process. The 7th limb of males is reduced to a stump, but males have a small copulatory limb. Description based on Kornicker 1967, Kornicker 1986, Bamber 1987, and Cohen et al. 2007.

Eusarsiella zostericola has separate sexes and internal fertilization. Its eggs are brooded. Females in Hadley Harbor, Massachusetts had 5-16 eggs. Development is direct. Males and females mature through five instars to maturity (Kornicker 1967; Bamber 1987).

Eusarsiella zostericola has a broad native range and tolerates a wide span of temperatures and salinities, from near-freezing to 33C, and upper mesohaline to upper euhaline salinities. It occurs over a depth range of 0.18-44.5 m. Habitats include unstructured sediments, ranging from silt to fine sand, oyster beds, eelgrass beds, mangroves, and hydroids. This ostracod is thought to be a carnivore, as one reported specimen contained a harpacticoid copepod (Wass 1972; Kornicker 1967; Kornicker 1986).

There are no known ecological and economic impacts of Eusarsiella zostericola.

Bamber, R. N. (1987) Some aspects of the biology of the North American ostracod Sarsiella zostericola Cushman in the vicinity of a British power station, Journal of Micropaleontology 6(1): 57-62

Kornicker, Louis S. (1986) Sarsiellidae of the Western Atlantic and northern Gulf of Mexico, and revision of the Sarsiellinae (Ostracoda: Myodocopina), Smithsonian Contributions to Zoology 415: 1-217