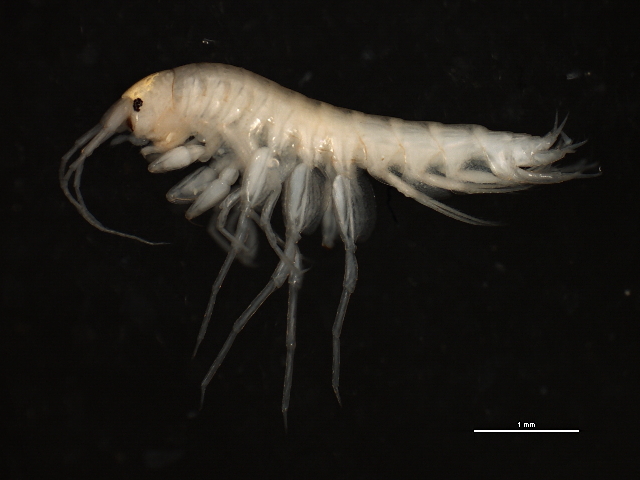 Crangonyx floridanus is a free-living freshwater amphipod. It was described from Florida and is native to the Southeastern US. Introduced populations are known from the San Francisco Bay, California (CA) and Japan. It is generally found in inland rivers and lakes, but has extended its distribution into estuaries in some areas. This species is widespread throughout the Sacramento-San Joaquin Delta, CA. Ecological and economic impacts of non-native populations have not been reported.

Crangonyx floridanus was described from the Florida peninsula and is known from scattered locations in South Carolina, the Florida Panhandle, and Louisiana (Bousfield 1958; Holsinger 1972; U.S. National Museum of Natural History 2015). This species probably has a broader native distribution in the Southeastern US. In 1995, Crangonyx sp. were collected in the Sacramento-San Joaquin Delta, California. Specimens collected in 1998-1999 were identified as C. floridanus. This amphipod is now widespread in the Delta, and has had scattered reports in the interior of California (Graening et al. 2012). In 1989, C. floridanus was first collected in Japan, and soon had colonized many inland rivers and lakes in central Honshu (Morino et al. 2004; Tojo et al. 2010).

Crangonyx sp. were collected in surveys in freshwater wetlands of the Sacramento-San Joaquin Delta in routine surveys in 1995. In a 1998-1999 study of invertebrates associated with aquatic plants, C. floridanus was identified, mostly at sites in the western end of the Delta (Toft et al. 2002; Toft et al. 2003). Later collections were made further upriver, at Lindseys Slough and Clifton Court Forebay, but also at sites close to the central San Francisco Bay and San Pablo Bay (Simas Creek and Wildcat Creek, Richmond; Graening et al. 2012). Two of the reported sites, the Tuolumne River in Stanislaus County and Hangtown Creek in Eldorado County are in the Central Valley and Sierra foothills, respectively (Graening et al. 2012).

Crangonyx floridanus was first noticed in Japan in a pond in Chiba prefecture in 1989 and sent to American researchers for identification. After it was recognized as the North American C. floridanus, it was found to be widespread in central Honshu, including the vicinity of Tokyo and tributaries of Tokyo and Sagami Bays (Morino et al. 2004). In 2005, it was discovered in the Chikuma River, Nagano Prefecture, which flows into the Sea of Japan (Tojo et al. 2010). Transport with aquatic plants or stocked fishes are likely vectors (Morino et al. 2004).

The body of Crangonyx floridanus is moderately compressed and smooth, lacking spines on the urosome segments. Coxal plates 1-4 are deep and lined with short setae, with Coxa 4 being larger, having a convex posterior edge and a mucron (small spine) on the ventro-posterior corner. The head is small, with a rounded anterior lobe, and lacking a ventral antennal sinus. The eyes are medium-sized and oval. Antenna 1 is 2X longer than Antenna 2, and bears a 2-segment accessory flagellum, characteristic of the Crangonyctidae.

Gnathopod 1 is smaller than gnathopod 2; both are subchelate, with the dactyl (segment 7) folding against the propodus (segment 6). Both gnathopods are larger and more robust in males than females. In females, the propodus and carpus (segment 5) are roughly equal, but in males, the propodus of both gnathopods is more than 2X as long as the carpus. The palms of both gnathopods are lined with many spines, larger in the male than in the female. Pereiopod 6 is the longest. The posterior ventral corners of the abdominal plates (pleons) end in small teeth. Uropods 1 and 2 are biramous, with the rami roughly equal, while Uropod 3 has the inner ramus reduced to a scale-like structure. In males, the outer ramus of Uropod 2 is lined with large, comb-like spines. Females reach a maximum size of 10 mm; males 8 mm. Description based on: Bousfield 1963, Holsinger 1972, Bousfield 1973, Morino et al. 2004, and Chapman 2007.

Crangonyx pseudogracilis
Crangonyx pseudogracilis is native to the Atlantic Coast from the Saint Lawrence River to the Delaware and Hudson Rivers, and to the Great Lakes Basin (Holsinger 1972; Bousfield 1973). It has been introduced to the Columbia River and estuary (Sytsma et al. 2004), and to upland creeks in the drainage of Morro Bay, California (Bottoroff et al. 2003, cited by Graening et al. 2012).

Crangonyx floridanus is a free-living, freshwater amphipod. Sexes are separate, the young are brooded, and development is direct (Bousfield 1973). In populations introduced to the Chikuma River, Japan, brooding females were seen year-round, even at winter water temperatures of 0-5C. Females began to bear eggs at ~4.5 mm length, and the numbers of eggs increased with body size, with up to 83 eggs for a female of ~7 mm length. The mean egg number per female was 35.5. Egg development time decreased with increasing temperature, for 25 days at 4C to 8-9 days at 25C. Females bear multiple broods, with new eggs deposited in the brood pouch before the young are released (Tojo et al. 2010).

Crangonyx floridanus is known from warm-temperate habitats, including its native region, the Gulf Coast interior (Florida-Louisiana), and introduced ranges in the Sacramento-San Joaquin Delta (Toft et al. 2002; Graening et al. 2012), and southern Japan (Morino et al. 2004). In Japan, it survives temperatures from 2C to 27C (Tojo et al. 2010). It was initially found in cypress swamps, ponds, and cave pools (Bousfield 1963). In the Delta, it occurred among the roots of floating Water Hyacinth (Eichornia crassipes), in preference to native Pennywort (Hydrocotyle umbellata). In Japan, C. floridanus inhabits a wide range of freshwater habitats, including lakes and rivers (Morino et al. 2004; Tojo et al. 2010). Its salinity tolerance is unknown, but the wide range of locations in the Delta suggests that it can probably survive salinities at least through the oligohaline range (0-5 PSU) (Toft et al. 2002; Graening et al. 2012).

Crangonyx floridanus is probably omnivorous, like many free-living gammarids, feeding on algae, detritus, and occasionally on invertebrates and carrion (Barnes 1983). Tojo et al. (2010) maintained this amphipod in culture on Phragmites detritus. The chief predators are fishes. In the Sacramento-San Joaquin Delta, this amphipod was eaten by non-native fishes: Bluegill (Lepomis macrochirus); Largemouth Bass (Micropterus salmoides); and Striped Bass (Morone saxatilis).

Crangonyx floridanus is locally common in freshwater portions of the Sacramento-San Joaquin Delta, and is a frequent food item for fishes (Toft et al. 2002). However, impacts on fish populations have not been reported.