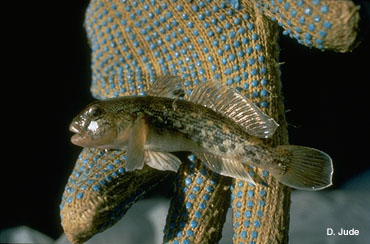 Neogobius melanostomus (Round Goby) is a fish native to the Black-Sea Caspian basin, and its tributaries, including Volga, Dnieper, Don, and Danube.  An extensive network of canals enabled it to colonize the Baltic Sea in Poland by 1990, and the estuarine waters of Belgium, the Netherlands, and Germany in 2004-2013.  Round Gobies were first collected in North America in Lake St. Clair, Michigan, between Lakes Erie and Michigan, in 1990, where they were introduced in ballast water.  These fish spread rapidly through the Great Lakes system, reaching the St. Lawrence estuary at Quebec City by 1997.  By 2004, they were collected in the Erie Canal, and by 2013, they, were found in the Mohawk River, a tributary of the Hudson, and in 2021, they ere collected in the tidal Hudson River near Albany, where they are now established. Dispersal along the East Coast by ballast water is possible,  Natural dispersal along the coast is less certain, because salinity tolerance varies with acclimation and possibly genetically. But Baltic specimens, with acclimation, can tolerate salinities of #o PSU.  A dead specimen in the Susquehanna River, found near Binghamton, New York, was a likely bait introduction.  In the Great Lakes, Round Gobies have had major impacts as predators of fish eggs and larvae, and as competitors with native benthic fishes such as darters and sculpins.  Introduced Zebra and Quagga mussels have provided nesting habitat and refuge from predators, allowing the Round Goby to achieve high densities in colonized areas.