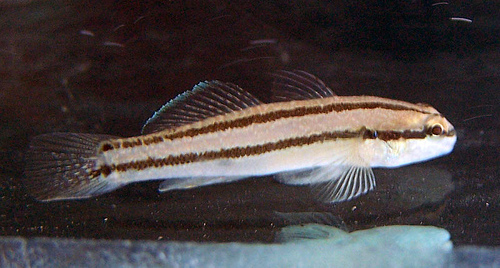 Tridentiger trigonocephalus (Chameleon Goby, Striped Goby) is a coastal marine fish in the family Gobiidae. Most reproductive adults are between 55 and 75mm, max length is 110mm. It is native to the northwest Pacific from Gwangzhou in southern China to the Amur River and Peter the Great Bay. It is rare at salinities below 22 PSU, but has been collected at 16 PSU. Specimens collected in lower salinities are likely the fresh water species T. bifaciatus, which was once consider the same species. North American introductions of T. trigonocephalus are limited to California, but it has also been introduced to Australia and Ukraine and Mediterranean Sea. There are no reported impacts from its introduced habitats.

Tridentiger trigonocephalus (Chameleon Goby) is native to the northwest Pacific from Gwangzhou in southern China to the Amur River and Peter the Great Bay (Lever 1996; Froese and Pauly 2018). It is rare at salinities below 22 PSU (Fuller et al. 1999), but has been collected at 16 PSU (California Academy of Sciences 2009). North American introductions of T. trigonocephalus are limited to California, but it has also been introduced to Australia and Ukraine and Mediterranean Sea.

The first collection of Chameleon Goby, Tridentiger trigonocephalus, in North America was from in Los Angeles Harbor in 1960, where it is established (Haaker 1979). A couple years later in 1962, a specimen was caught in Redwood City harbor. It was later collected in relatively saline parts of San Francisco Bay, including Lake Merritt, Berkeley, and the Alviso Salt Ponds, on the South Bay (Cohen and Carlton 1995; California Academy of Science 2014; Mejia et al. 2008). Between 1978 and 1992 specimens were collected along the coast of southern California from Ventura to Laguna (USGS Nonindigenous Aquatic Species Program 2014), and a few have been found in San Diego Bay (Pondella and Chin 2005). Many of these fish were found among piers, riprap, and discarded bottles. This fish appears to be established in San Diego Bay, but is rare (Williams et al 2016). It has been collected in the brackish Napa River at a salinity of 16 PSU (2001, California Academy of Sciences 2009). Most of the early reports of the Chameleon Goby's occurrence in the upper San Francisco estuary probably refer to the similar T. bifasciatus, which is more of a freshwater species (Matern and Fleming 1995).

In 1973 a specimen of Tridentiger trigonocephalus was collected in Sydney Harbour, New South Wales (Hoese 1973), where they are established. In 1977 they were found in Port Philip Bay, Victoria and from the Swan River Estuary, Western Australia in 1976 (Lockett and Gomon 1999). In Australia this goby is most common on hard bottoms in commercial port areas and can reach densities of 10-20 fish per 10 m-2 (Lockett and Gomon 2001).

In 2006, a single specimen of T. trigonocephalus was collected in Sevastopol Bay, Ukraine, on the Black Sea (Boltachev et al. 2007). That same year, 2006, one specimen was collected in the Mediterranean Sea (Goren et al. 2009). In 2008, 17 individuals with eggs and nests were found in Sevastopol Bay, indicating an established population (Boltachev and Karpova 2010). Ballast water is the likeliest vector for the Australian populations and the Israeli occurrence (Lockett and Gomon 2001; Goren et al. 2009). However, ballast water discharges from the Pacific are rare in Sevastopol Bay, while Pacific Oyster transplants (Crassostrea gigas) occurred outside the Bay. An unauthorized aquarium release could have been the source of the Sevastopol population Boltachev and Karpova 2010).

Tridentiger trigonocephalus (Chameleon Goby; Striped Goby) is a coastal marine fish. It has the typical features of the family Gobiidae, including the two pelvic fins united to form a conical sucking disk, a spiny anterior and a soft posterior dorsal fin, and eyes near the top of the head. The dorsal fins have 6-7 spines and 11-14 rays, respectively, which are separated by a gap. The uppermost ray of each pectoral fin is free and covered with conical projections. The lateral line is not noticeable. This is a relatively fat goby with a wide flat head. There are large sensory canal pores on the top of the head in the interorbital region (Matern and Fleming 1995). Colors are highly variable, but there is usually a black spot at the upper base of the caudal fin and a dark bar followed by a clear area at the base of the caudal fin. This fish usually has two broad dark-brown stripes from head to tail on a yellowish-gray background but can also be a marbled pattern made up of vertical bars. While guarding eggs, males become predominantly black (Boltachev and Karpova 2010). There are large, white speckles on the head, which do not extend to the ventral surface. The dorsal and anal fins are edged with white (Matern and Fleming 1995). This fish reaches a maximum length of 110 mm (Miller and Lea 1972; Eschmeyer et al. 1983; Froese and Pauly 2018).

Tridentiger trigonocephalus (Chameleon Goby) is a coastal marine fish. Males are territorial and guard nests in oyster or mussel shells. Females can spawn up to 10 times in a summer. Eggs hatch in 7-10 days and are guarded by the male. The planktonic larvae are about 3 mm long. The fish grow to 35-50 mm in their first year and spawn in their second year when they are 55-75 mm long. Fish larger than this 75mm are rare (Hirose and Kubo 1983, cited by Lockett and Gomon (1999), however, some specimens can reach 110 mm (Froese and Pauly 2018). Females on the south coast of South Korea had fecundities of 3,448 to 9,654 eggs over a size range of 40-60 mm (Hwang and Baek 2013).

No impacts have been reported for Tridentiger trigonocephalus in its introduced habitats. In Australia, its range in estuaries is restricted to harbor areas (Lockwood and Gomon 2001).