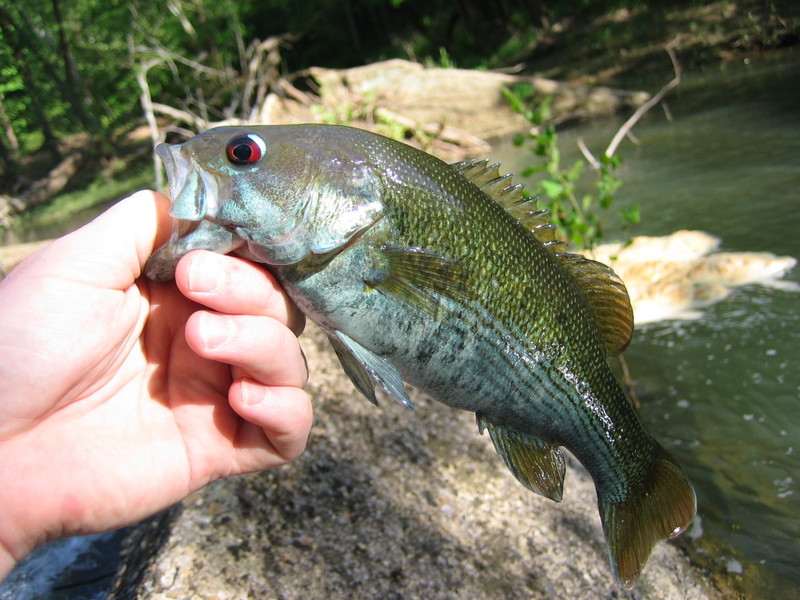 The Redeye Bass belongs to the family Centrarchidae, which include Sunfishes and Black Basses, and all have laterally compressed bodies. Black Basses (Micropterus spp.) are large fish with an elongated body and large mouth extending under or past the eye, a shallowly forked tail fin, and a black spot at the rear angle of the gill cover but no gill flap. Dark brown lines radiate from the snout and back of the eye to the rear edge of the gill cover. Redeye Bass, so named for their brick-red eye, in particular have a large mouth, mottled bronze-olive coloration with a yellowish white to bluish white belly, dark bars on the upper side, and lateral rows of dark spots. Fins are also brick red and while the upper and lower tail fin are white. They are native to a limited section of the Coosa River Basin in the Appalachians and Piedmont in Alabama, Georgia, and Tennessee. They inhabit rocky runs and pools of streams and small rivers and tolerate cooler winters and warm summers. They were deliberately introduced into Sacramento-San Joaquin tributaries and other California streams as a gamefish and are considered established and rare-to-common, depending on the tributary. They are in a high abundance in the Consumne and Stanislaus Rivers and may represent a threat to native fishes as they compete with and feed upon other fishes, along with terrestrial and aquatic insects and crayfish. Populations have also been introduced to Puerto Rico's rivers and reservoirs.