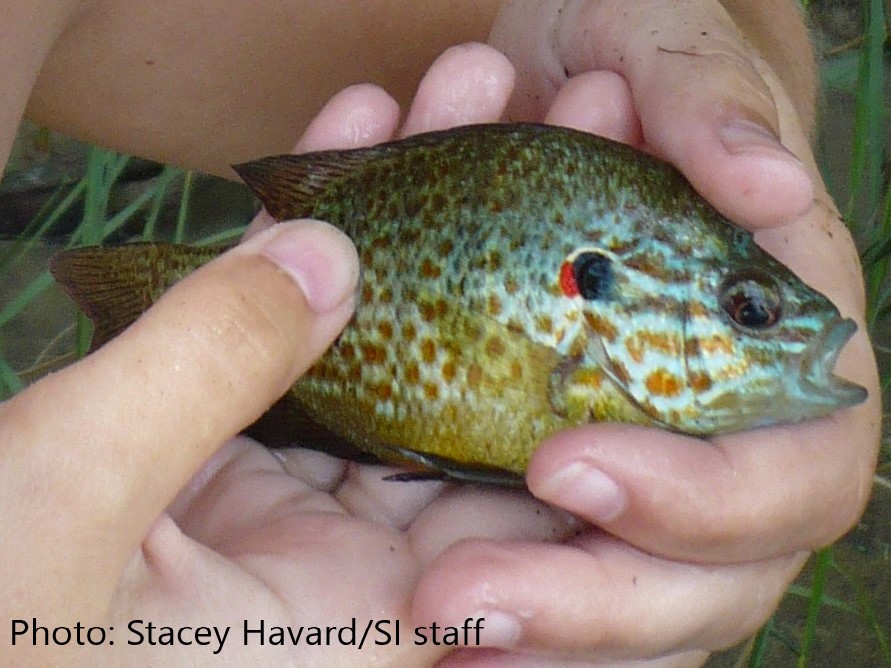 Pumpkinseed (Lepomis gibbosus) are medium-sized freshwater sunfish native to eastern North America south to South Carolina. They have been introduced to at least 34 countries and numerous lakes, ponds, and streams in the Great Plains, Rocky Mountains, and in Pacific coastal drainages in the United States. Most of these introductions were intentional fisheries related introductions. Competition with native species for food and space have been the most common impact in their introduced range. In the Great lakes that have been beneficial in eating introduced mussels.

Pumpkinseed (Lepomis gibbosus) are native to eastern North America from Minnesota and eastern North Dakota east to southwestern New Brunswick, south to northern Missouri and West Virginia, and along Atlantic drainages, through most of South Carolina (Page and Burr 1991). They have been widely introduced elsewhere in North America (USGS Nonindigenous Aquatic Species Program 2014), and to at least 34 countries (Lever 1996; Froese and Pauly 2018). In North America they have been introduced to lakes, ponds, and streams in the Great Plains, Rocky Mountains, and in Pacific coastal drainages (Page and Burr 1991; USGS Nonindigenous Aquatic Species Program 2018).

The first Pumpkinseed release to Pacific tidal waters may have been with a release of mixed sunfishes and bass into the Willamette River in Salem, Oregon n 1894 (Lampman 1946). They are now well established in the tidal fresh Columbia and Willamette near Portland (Hughes and Gammon 1987; Farr and Ward 1992; Van Dyke et al. 2009,) near Longview, Washington (2005, USGS Nonindigenous Aquatic Species Program 2018) and below the Bonneville Dam (2001, USGS Nonindigenous Aquatic Species Program 2018). Pumpkinseeds have also been widely released in lakes in Washington and Oregon (USGS Nonindigenous Aquatic Species Program 2018), as well as the interior of British Columbia, in the Fraser River drainage near Vancouver, and in lakes on Vancouver Island (Carl and Giguet 1972; McPhail 2008).

The Pumpkinseed were stocked in a number of California lakes in the 1930s-40s, and were collected in Vasona Reservoir, Los Gatos, in the San Francisco Bay watershed in 1961 (Leidy 2007). In 1980 they were collected in Walnut Creek, which flows into the lower Delta. They became established, but rare, in the upper Sacramento-San Joaquin Delta (Light et al. 2005; Brown and Michniuk 2007; Leidy 2007).

Pumpkinseed were introduced to hatcheries in Germany in 1881, and to France in 1885. They are now introduced to ~32 European countries and established in most of these from Norway to Spain, Italy, and Ukraine. They were presumably introduced for fisheries but are also kept as aquarium and ornamental fishes that were released or escaped (Lever 1996; Sterud and Jørgensen 2006; Froese and Pauly 2018). Pumpkinseeds are found in the Odra/Oder estuary, feeding into the Szczecin Lagoon of the Baltic Sea (Gruszka et al. 1999) and in northwest Black Sea estuaries in Ukraine (Kvach and Kutsukon 2017).

Lepomis cyanellus
Green Sunfish (Lepomis cyanellus) differ from the Pumpkinseed in that they have a more rectangular 'bass-like' body, a large mouth, and dark vertical bars running down the body, and has dark spots on the posterior of the anal and dorsal fins (Page and Burr 1991). Green Sunfish are native to the Great Lakes-Mississippi-Gulf basins (Page and Burr 1991). They are introduced in the San Francisco and the Columbia River estuaries, and on the Atlantic Slope from South Carolina to Connecticut (USGS Nonindigenous Aquatic Species Program 2018). they are rare or absent in Coastal Plain drainages south of the Potomac River (Jenkins and Burkhead 1993).

Lepomis macrochirus
Bluegill (Lepomis macrochirus) resemble Pumpkinseed, they have a similar oval 'typical-sunfish' body, a small mouth, and a bright red spot on the earflap, and long, pointed pectoral fins. But Bluegill have a black spot on the rear edge of the dorsal fin (Page and Burr 1991). Bluegill are native to the Atlantic Slope from North Carolina to Florida, the Great Lakes basin, and the Mississippi-Gulf basins from Quebec and Minnesota to Texas (Page and Burr 1991). They are introduced to the San Francisco and Columbia River estuaries, and widely through the western US, and on the Atlantic Slope, from northern North Carolina to Maine (USGS Nonindigenous Aquatic Species Program 2018).

Lepomis microlophus
Redear Sunfish (Lepomis microlophus) has the same body shape and sunfish characteristics as Pumpkinseed, but they have longer earflap, with a bright red spot. Redear Sunfish are gray green dorsally, and white to yellow below, covered with dusky-gray spots (Page and Burr 1991). They are native to the Atlantic Slope from Georgia to Florida, and the Mississippi-Gulf basins from Indiana and Illinois and Minnesota to Florida and Texas (Page and Burr 1991). Their introduced range includes the San Francisco estuary on the west coast and the Atlantic Slope form South Carolina to the Potomac River on the east coast (USGS Nonindigenous Aquatic Species Program 2018).

Pumpkinseed (Lepomis gibbosus) are freshwater sunfish that enter brackish water (Murdy et al. 1997). Adults mature at 1-3 years, at 60 mm (in a stunted population), but more typically at 100-150 mm. Spawning takes place at 13-28 C, usually in freshwater, but sometimes in salinities up to 10 PSU (Hardy 1978; Jenkins and Burkhead 1993; Moyle 2002). Males excavate and guard a nesting site, in shallow water, in sand or gravel, often nesting colonially, but guarding their nests individually. Males may spawn with several females and guard the nests until they hatch. Females can carry 600-3,000 eggs. Eggs hatch in 3-4 days at 24-28 C. When the yolk-sac is absorbed, the larvae leave the nest and begin feeding on zooplankton (Hardy 1978; Jenkins and Burkhead 1994; Moyle 2002). Extensive variation in life history, including growth rate and adult size, occurs in European populations, based on climate and food resources (Copp et al. 2004; Fox and Copp 2014).

Pumpkinseed inhabit a wide range of freshwater habitats, including ponds, pools, small rivers, and estuaries, and can tolerate a wide range of temperatures, 4-32 C (Hardy 1978; Moyle 2002). They appear more tolerant of ice-cover and long winters than other sunfishes, based on their native range, and successful colonization of northern Europe (Page and Burr 1991; Lever 1996). They have been found in brackish water estuaries on the East Coast. They have been collected at 10-12 PSU in the Rhode River, a Chesapeake tributary (Hines et al., personal communication), and at 18.2 PSU in the lower Potomac (Hildebrand and Schroeder 1928). Habitats include vegetated lakes and ponds, pools of creeks, small rivers, and brackish estuarine waters (Hardy 1978; Jenkins and Burkhead 1994; Moyle 2002; Murdy et al. 1997). Pumpkinseeds are carnivores, and feed on worms, insects and crustaceans, but their molar-like teeth enable them to crack the shells of clams and snails (Jenkins and Burkhead 1994; Moyle 2002). Their ability to feed on Zebra Mussels (Dreisena polymorpha) was of interest for biocontrol but has not prevented the spread of the mussel (French 1993; Colborne et al. 2015). Common predators include larger fishes, such as bass and catfish, birds, and humans, especially beginning fishers (Murdy et al. 1997).

Pumpkinseed (Lepomis gibbosus) are popular with children learning to fish but are regarded as too small to be a good pan-fish by many fisherman. They are prone to develop dense, stunted populations (Moyle 2002). In the Sacramento-San Joaquin Delta, Pumpkinseeds are too rare to have significant impacts (Dill and Cordone 1997). They are more abundant in the Columbia estuary (Farr and Ward 1994; Van Dyke et al. 2009). Lampman (1946) noted that in the lower Columbia River, ' the pumpkinseed sunfish does not often attain sufficient size to give it value as a pan fish’ but reaches a greater size in some lakes. 'Although they are the most beautifully colored of all the sunfishes, now in California, their spread to other systems should be discouraged' (Moyle 2002). Hybridization is common among introduced populations of sunfishes, especially in small, turbid bodies of water. Hybrids have been noted with Green Sunfish, Bluegills, and Warmouth (Hubbs 1955; Jenkins and Burkhead 1993; Moyle 2002).

One potentially beneficial impact of Pumpkinseeds in their native populations in the Great Lakes basin, and possibly in some introduced populations in California is their morphological specialization for feeding on mollusks, particularly Zebra and Quagga Mussels (Dreissena polymorpha; D. bugensis) (French 1993). In three Ontario lakes, the diet of Pumpkinseeds shifted from gastropods to invasive mussels (Colborne et al. 2015). However, this predation did not prevent the rapid spread of the mussels in the Great Lakes, Hudson, and Mississippi systems.

In Europe, Pumpkinseeds were widely introduced for fishing. They are often kept as an aquarium fish on account of their bright colors, and probably released when they get too large or aggressive (Sterud and Jorgensen 2006). In Belgium, France, Germany, Hungary, Italy, and Switzerland, they are regarded as an undesirable introduction due to competition with more desirable species or predation on eggs and larvae (Lever 1996). Nest guarding and territoriality is an unusual habit in European fishes and deprives native species of space for foraging. In Netherlands ponds, Pumpkinseeds sharply reduced the density and diversity benthic macroinvertebrates (Van Kleef et al. 2008).