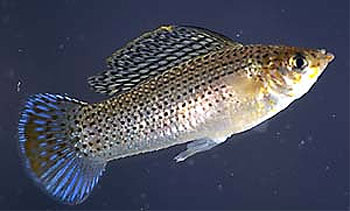 Sailfin Mollies (Poecilia latipinna) are small live-bearing fish native to the Gulf Coast and the East Coast from the Cape Fear drainage in North Carolina to Cape Canaveral, Florida. They are a popular aquarium fish and have established populations in coastal habitats in California, Hawaii, Guam, the Philippines, Queensland, Australia, Greece, Egypt, and the Bahamas. They were introduced through aquarium releases but also introduced for insect biocontrol and raised as a baitfish for tuna. They can colonize a wide range of habitats in warm-temperate and subtropical climates, and is especially capable of utilizing modified habitats, such as ditches, canals, water tanks, and disturbed marshes. The Sailfin Mollies have shown aggressive behavior towards other fishes, such as California Killifish (Fundulus parvipinnis), Bahama Pupfish (Cyprinodon laciniatus), and desert pupfishes (Cyprinodon spp.). But many native fishes also prey upon them.

Sailfin Mollies (Poecilia latipinna) are native in freshwater, brackish and marine habitats from the Cape Fear River, North Carolina, to Veracruz, Mexico. They breed in marine and freshwater environments, but rarely occur more than 200 km from marine waters in their native range (Page and Burr 1991). They are widely reared and sold as an aquarium fish, and have established introduced populations in coastal habitats in California, Hawaii, Guam, the Philippines, Queensland, Australia, and the Bahamas. They have also been released for insect biocontrol and raised as a baitfish for tuna (Randall1987; Swift et al. 1993; Lever 1996; Koutsikos et al. 2018).

Sailfin Mollies (Poecilia latipinna) were first introduced into Moanalua Stream, in Oahu in 1985 for mosquito control. They were unsuccessful as a mosquito control, feeding mostly on algae and benthic invertebrates. Sailfin Mollies are now established in brackish lagoons in Oahu, Hawaii, Maui, Kaui, and Molokai (Brock 1960; Randall 1987; Carlton and Eldredge 2009). It is abundant in Pearl Harbor (Coles et al. 1999). They have been found at salinities of 0-27 PSU (Carlton and Eldredge 2009). They were also introduced as baitfish for a Skipjack Tuna (Katsuwonus pelamis) fishery, but this transplant to Kauai was unsuccessful (Randall 1987).

Sailfin Mollies (Poecilia latipinna) have been introduced to many locations in the interior of North America, including hot springs in Alberta and Montana, and desert springs, streams, and reservoirs in California, Nevada, Utah, Colorado, and New Mexico, and inland rivers in Texas (Lever 1996; Dill and Cordone 1997; Moyle 2002; USGS Nonindigenous Aquatic Species Program).

In the Caribbean, Sailfin Mollies have been reported from Puerto Rico. One record (of 4) was near the mouth of the Canovanillas River, on the north shore of the island (2007, USGS Nonindigenous Aquatic Species Program 2018). The Sailfin Molly is also established in salt lakes on the Bahamas (1972, Barton 1995).Other Caribbean records are in the Dominican Republic and Venezuela (Koutsikows et al. 2018). In South America, Koutsikos et al. (2018) indicate records from the Pacific coast of Colombia and Brazil. There are multiple records from the Middle East, including coastal parts of the Persian Gulf, and the Shaat-Al-Arab estuary (2014, Esmaeilei et al. 2017; Koutsikos et al. 2018). Records in Asia include India, Thailand, Singapore, and China (Lever 1996; Kunlapapuk et al. 2015; Koutsikos et al. 2018). In the Philippines, it inhabits brackish ponds, where it was introduced for mosquito control (Lever 1996).

Sailfin Mollies were introduced to Australia around 1968 to creeks in Hervey Bay and in Sandgate Lagoon, Queensland, Australia, in 1969 as aquarium releases. Early reports refer to 'Black Mollies', so some of these fish may have been a cultivated color strain (Lever 1996). In Australia, Sailfin Mollies are legally treated as a pest species, and can be kept in aquaria, but cannot be used as bait or returned to the wild (Museums Victoria 2018). In New Zealand, it is found in geothermally heated Lake Taupo, where it was first released in 1967, but is unlikely to spread into colder waters (Lever 1967). On smaller Pacific islands they are established in Guam, Fiji, and the Northern Mariana Islands (Maciolek 1984; Lever 1996; Koutsikos et al. 2018).

In 2010, a population of Sailfin Mollies was discovered in a brackish, geothermally heated lagoon, Lake Vouliagmeni, near Athens, Greece. Many of the fish had black pigmentation, indicating a recent aquarium introduction, while others had a 'wild-type' coloration. This is the first established population of the Sailfin Molly in Europe (Koutsikos et al. 2017).

Poecilia mexicana
Poecilia mexicana (Shortfin Molly) is native to the Atlantic Slope of Mexico from the Rio San Juan to Guatemala (Page and Burr 1991). It is established at hot springs in Montana, Idaho, and Colorado, and desert sites in Arizona, California, and Nevada (USGS Nonindigenous Aquatic Species Program 2018). The California records are in streams and canals, leading to the Salton Sea and to the lower Colorado River (Dillon and Cordone 1991).

Sailfin Mollies (Poecilia latipinna) are live-bearing fish that breed in freshwater, brackish, marine, and hypersaline environments. They have also been seen more than 200 km from marine waters in their native range, but this is rare (Page and Burr 1991). Females brood their eggs and release fully developed juveniles from a brood pouch. Livebearers (Poecilidae) are strongly sexually dimorphic, with small males adapted for internal fertilization. Courtship involves displays by the male showing off their expanded dorsal fin. Gestation takes ~28 days, and females produce 10-141 young, which are ~12 mm at birth. The young fish mature rapidly and probably live for 2-3 years (Rohde et al. 1994; Froese and Pauly 2018).

Sailfin Mollies inhabit a wide range of environments from freshwater to hypersaline waters including, caves, canals, ditches, springs, lagoons, mangroves, marshes and swamps (Page and Burr 1991; Rohde et al. 1994; Nordlie 2006; Froese and Pauly 2018). Their native and introduced ranges are limited by low winter temperatures (~7.7 C), and a high temperature requirement for reproduction (22 C) (Froese and Pauly 2018; Koutsikos et al. 2018). Their preferred temperature range is 20-30 C, but they can tolerate extremes up to 41 C (Nordlie 2006; Bierbach et al. 2010). At the same time, this fish has a very wide salinity range, from freshwater to hypersaline conditions, 0-80 PSU (Simmons 1957; Nordlie 2006). Sailfin mollies prefer still or slow-flowing water that is densely vegetated. They often swim and feed near the surface. In the Carolinas, they occur only in Spartina marshes, which also seems to be their preferred habitat in California (Page and Burr 1991; Swift et al. 1993; Rohde et al. 1994). In Sweetwater Marsh, San Diego Bay, Sailfin Mollies especially used salt marsh pannes (shallow depressions) and the marsh surface (Williams 1998). Sailfin Mollies are tolerant of low oxygen, especially when they have access to the oxygenated water just below the surface (Nordlie 2006). They are omnivores, feeding on algae, vegetation, benthic invertebrates, mosquito larvae, and detritus (Randall 1987; Rohde et al. 1994). This fish is vulnerable to fish and bird predators, but compensates by rapid reproduction.

Sailfin Mollies (Poecilia latipinna) can colonize a wide range of habitats in warm-temperate and subtropical climates, and is especially capable of utilizing modified habitats, such as ditches, canals, water tanks, and disturbed marshes (Randall 1987; Swift et al. 1993). They are economically important as popular aquarium fish, which are sold in wild-type color and morphology, but also in black, spotted, yellow, and orange color morphs, and with modified fins (Lyretail) varieties (Froese and Pauly 2018). Some introductions were made for mosquito biocontrol, but these omnivorous fish proved to be ineffective mosquito-larva predators (Randall 1987). Sailfin Mollies have shown aggressive behavior towards other fishes, such as California Killifish (Fundulus parvipinnis), Bahama Pupfish (Cyprinodon laciniatus) (Barton 1995; Williams et al. 1998), and desert pupfishes (Cyprinodon spp.).

Sailfin Mollies have a wide range of tolerances, and can colonize a wide range of habitats, including those inhabited by more specialized and localized species. They can be aggressive towards other species, such has California Killifish (Fundulus parvipinnis), Bahamas Pupfish (Cyprinodon laciniatus), and the Desert Pupfish Cyprinodon macualrius (Barton 1995; Dill and Cordone 1997; Williams et al. 1998). But young Sailfish Mollies also provide an extra food source tor the native fishes, such as California Killifish, which grew faster in the presence of Sailfin Mollies (Torchin 2010).

Simmons, Ernest G. (1957) An ecological survey of the Upper Laguna Madre of Texas, Publications in Marine Science of the University of Texas 4(2): 156-200