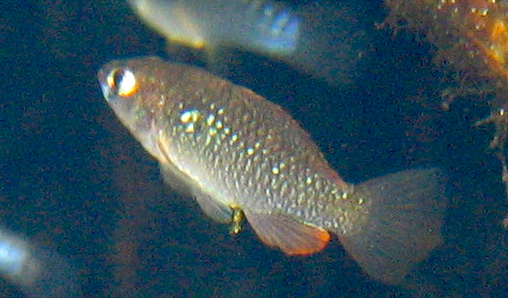 Rainwater Killifish (Lucania parva) is native to Atlantic Coast from Cape Cod, MA to the Florida Keys and Quintana Roo, Mexico. Its most commonly found in estuaries, not far above the tideline, however, it ranges far into non-tidal freshwaters is several rivers that have mineral-rich saline waters. This species was introduced to the west coast between 1958 and 1963. It’s likely that these fish were accidentally with fish stocked by a hatchery in Dexter, New Mexico. Introductions occurred in the San Francisco Estuary and Irvine Lake, California, Yaquina Bay, Oregon, and Blue Lake, Utah Lake, and Timpie Springs in Utah, and a few others. The introduction of Rainwater Killifish may have played a role in the extirpation of the endangered Tidewater Gobies (Eucyclogobius newberryi) in the San Francisco estuary.

Rainwater Killifish (Lucania parva) is native to Atlantic Coast from Cape Cod, Massachusetts, to the Florida Keys and Quintana Roo, Mexico. Its most commonly found in estuaries, not far above the tideline, however, it ranges far into non-tidal freshwaters is several rivers that have mineral-rich waters, including the St. Johns River, Florida, and the Rio Grande-Pecos system of Texas-New Mexico (Hubbs and Miller 1965; Robins et al. 1986; Page and Burr 1991; US National Museum of Natural History 2009). It has been introduced in the Western United States where it was discovered in four separate locations from 1958 to 1961 (Hubbs and Miller 1965).

In 1958 to 1963, populations of the Rainwater Killifish (L. parva) were discovered almost simultaneously in five separate areas of the Western United States. Populations were discovered in the San Francisco Estuary, Yaquina Bay, Oregon, Irvine Lake (Orange County, California), Blue Lake and Timpie Springs (both in Utah). Hubbs and Miller (1965) noted that Irvine Lake and the Utah sites all received Largemouth Bass (Micropterus salmoides) raised in a hatchery in Dexter, New Mexico, on the Pecos River, a Rio Grande tributary which has native Rainwater Killifish populations, and considered this the vector for the introductions. However, they did not find documentation for gamefish transfers from the Dexter Hatchery to the San Francisco Bay or Yaquina watersheds, and based on meristic and morphometric similarities to Atlantic Coast fish, that Rainwater Killifish had been introduced from the East Coast with Eastern Oysters (Hubbs and Miller 1965). However, plantings of Redear Sunfish (Lepomis microlophus) from the Dexter hatchery were made in the San Joaquin valley in the 1950s (Shapalov et al. 1959, cited by Cohen and Carlton 1995). Since the Dexter hatchery was a major source for warm water gamefish in the West, and the discoveries were so simultaneous, a single source seems likely. The merisitic similarities of the West Coast populations to Atlantic populations are small and could be explained by adaptation to an estuarine habitat (Cohen and Carlton 1995).

In May 1958, Rainwater Killifish were discovered in Berkeley Aquatic Park on San Francisco Bay. It was subsequently discovered in several locations, mostly sloughs and lagoons on the Central Bay (Richmond), Oakland (Merrit Slough), Corte Madera Creek), the South Bay (Palo Alto), and San Pablo Bay (Sonoma Creek) (Hubbs and Miller 1965). By the 1970s, it was abundant in Suisun Marsh (Matern et al. 2002). It has been found in the lower reaches of 25 San Francisco Bay tributaries (Leidy 2007), and in salt ponds adjacent to South San Francisco Bay at salinities up to 50 PSU (Mejia et al. 2008). In 1963, this fish was found in Lake Irvine, a reservoir in the interior of Orange County (Hubbs and Miller 1965). Again, this population is believed to be established, though we are unaware of recent records (Swift et al. 1993). An established population was found at Goleta Point, on the University of California Campus in Santa Barbara in the early 1980s (Swift et al. 1993). In July 1958, another population of L. parva was found in several sloughs near Yaquina Bay, Oregon (1958, Hubbs and Miller 1965). We assume that this fish is still established there, but we have found no recent records.

In 1959 Rainwater Killifish (L. parva) were found in Timpie Spring, on the shore of Great Salt Lake, Utah. Since then, this fish has been found elsewhere in the Great Salt Lake Basin basin, in Blue Lake (Hubbs and Miller 1965) and in Utah Lake (Lee et al. 1980).

Fundulus diaphanus
Fundulus diaphanus (California Killifish) is native to Eastern North America from Newfoundland to South Carolina, west to Manitoba and Illinois, in fresh and brackish waters. It has been introduced in the Columbia River. The California Killifish is olive dorsally and yellowish-brown below, with green-brown bars along the sides. Adults can reach 130 mm, but juveniles could be confused with Lucania parva (Page and Burr 1991).

Fundulus parvipinnis
Fundulus parvipinnis (California Killifish) is native to the Pacific Coast from Morro Bay to Baja California in shallow bays and salt marshes. This fish is olive dorsally and yellowish-brown below, with dark bars along the sides. Adults can reach 110 mm, but juveniles could be confused with Lucania parva (Eschmeyer and Herald 1983).

Lucania goodei
Lucania goodei (Bluefin Killifish) is more slender, with a zigzag black stripe from nose to tail. Males have bright blue fins (Page and Burr 1991). This killifish has been found in the San Dieguito River and the Sacramento-San Joaquin Delta but is not known to be established.

Over most of its range, Rainwater Killifish (Lucania parva) is an estuarine species, ranging from euhaline to tidal fresh waters, but nontidal freshwater populations occur far up the Rio Grande and Pecos Rivers in Texas, New Mexico, and Mexico, and on the Florida peninsula, where the 'fresh' waters are slightly saline or highly mineralized (Page and Burr 1991). Males tend to be somewhat more colorful than females and smaller (Hardy 1979; Robins et al. 1986; Page and Burr 1991; Murdy et al. 1997; Froese and Pauly 2018). Fish mature at about 25 mm. Females can carry 7-104 eggs. The spawning time in Chesapeake Bay is April-July, but in Florida they spawn year-round (Hildebrand and Schroeder 1938; Hardy 1978). Males guard territories, but do not make nests. The eggs are demersal and adhesive and are scattered on vegetation. The larvae are initially demersal, but then swim in small schools, often moving into very shallow-water. They can mature in 3-5 months after hatching (Wang 1986).

At the northern end of its range, in southern New England, Rainwater Killifish inhabit estuaries which freeze over in winter, but in Florida and Mexico they range into subtropical waters (Robins et al. 1986; Page and Burr 1991). They are remarkably euryhaline, occurring and breeding at 0-49 PSU (Hardy 1978). Inland freshwater populations occur mostly in alkaline waters with high mineral content, such as the St. Johns River, Florida, and the Rio Grande Basin in Texas, Mexico, and New Mexico (Page and Burr 1991). These fish are sensitive to acidic conditions (Dunson and Travis 1991). The Rainwater Killifish are strongly associated with dense vegetation including Tapegrass (Vallisneria americana), Pondweed (Potamogeton spp.), and Eelgrass (Zostera marina). Rainwater Killifish feeds mostly on small invertebrates (Hildebrand and Schroeder 1928). In experiments they strongly preferred vegetated areas, and preferred them even more in the presence of predators (Largemouth Bass) (Jordan 2002).