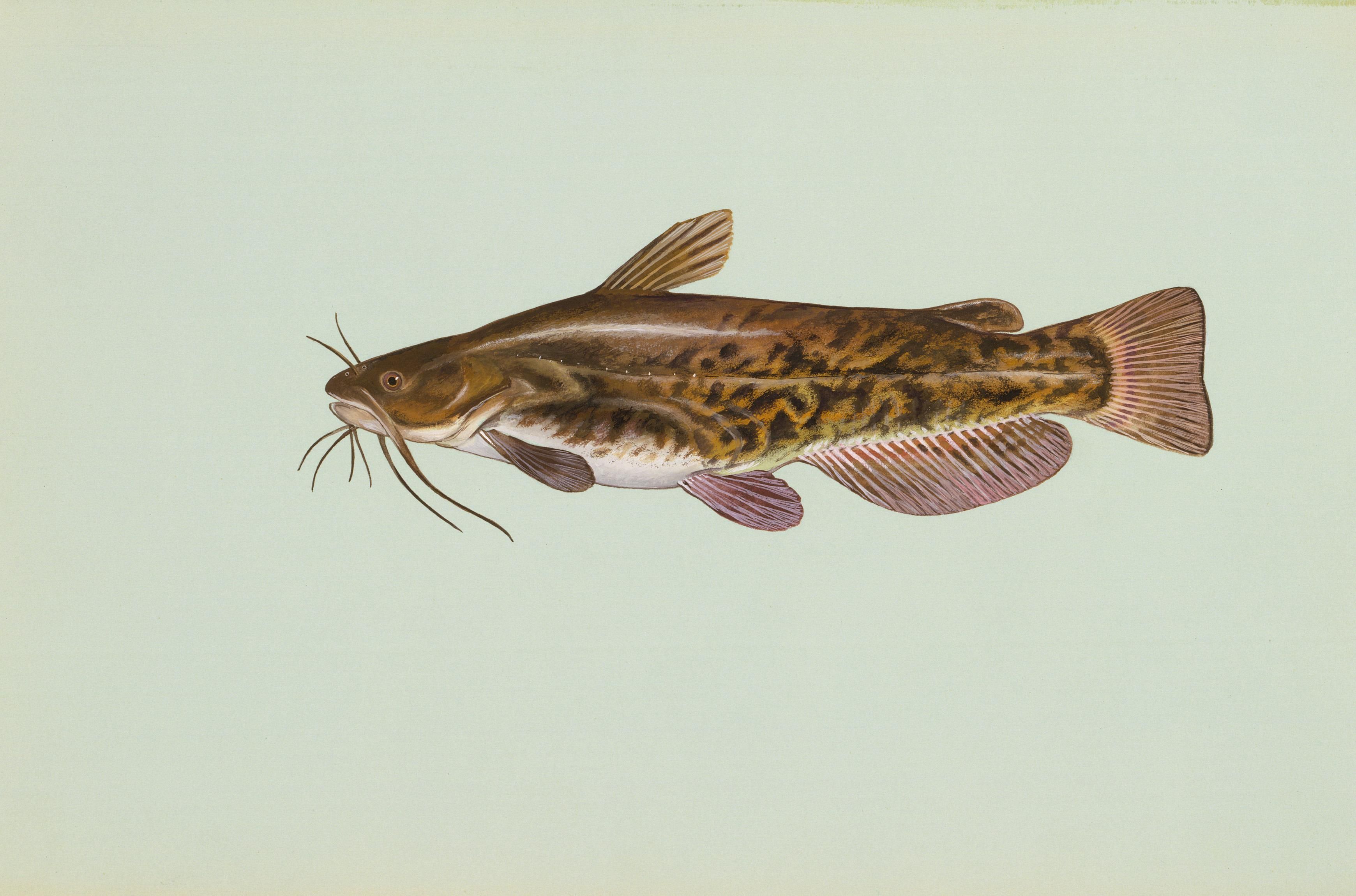 Brown Bullheads (Ameiurus nebulosus) are native through the interior basins from southwest Saskatchewan to the St. Lawrence estuary in Quebec, and Arkansas to Florida and the tip of Florida to New Brunswick. They have been widely introduced in western North America and to Puerto Rico, 21 European countries, Iran, Turkey, Vietnam, China, and New Zealand. They were introduced as food and sport fish but are potential predator on and competitor with many small native fishes. Few specific negative impacts have been reported, but they have had a negative impact on native fish in British Columbia, Canada.

Brown Bullheads (Ameiurus nebulosus) are native through the interior basins from southwest Saskatchewan to the St. Lawrence estuary in Quebec, and Arkansas to Florida. On the Atlantic coast, this catfish ranges from the tip of Florida to New Brunswick (Page and Burr 1991; USGS Nonindigenous Aquatic Species Program 2014). They have been widely introduced in western North America. They were first stocked in the Sacramento River in 1874 (Cohen and Carlton 1995; Dill and Cordone 1997), then to the Columbia River in 1894 (Lampman 1946), and the Fraser River, British Columbia (Carl and Clemens 1967). In British Columbia, the first releases occurred on Vancouver Island and the lower Fraser River (Carl and Giguet 1967; Richardson et al. 2000). They have also been introduced in Puerto Rico, much of Europe, and New Zealand (Lever 1996)

In 1874, Livingston Stone, of the California Fish Commission planted 74 'Horned Pout' from Vermont in ponds and sloughs near Sacramento (Smith 1895). The early history of the population is difficult to determine, since Smith lumps all 'catfishes' together. However, the Brown Bullhead became the most widely distributed catfish in California (Dill and Cordone 1997; Moyle 2002). In the San Francisco Bay estuary only 0.3% percent of the catfish collected in Delta surveys in the 1960s were Brown Bullheads (Turner 1966, cited by Cohen and Carlton 1995). In recent surveys in the fresh waters of the Delta, they have had a similar rank, well below White Catfish (Feyrer and Healy 2003; Brown and Michniuk 2007; Sommer et al. 2014). In one survey of tidal fresh marshes, in shallower waters, Brown Bullheads outnumbered White Catfish, but both were relatively rare (Grimaldo et al. 2012). Brown Bullheads also occurred in the fresh-brackish Suisun Marsh, but were much less abundant then White Catfish (Matern et al. 2002).

In 1882, 'catfish' were stocked in Silver Lake, Washington, on the Cowlitz River, which joins the Columbia River downstream of Portland. By 1890, catfish, presumably Brown Bullheads, were swarming on Sauvie Island, in the Columbia River. A collection of catfish from the Willamette and Columbia in 1945 was dominated by Brown Bullheads (Lampman 1945). In more recent surveys in the Portland area, both Brown and Yellow Bullheads were present, but in relatively small numbers, compared to other species (Hughes and Gammon 1987; Farr and Ward 1994; Van Dyke et al. 2009).

Brown Bullheads were stocked in freshwaters in Oahu in 1893 but did not become established (Maciolek 1984).

Brown Bullheads have been introduced to Puerto Rico, 21 European countries, Iran, Turkey, Vietnam, China, and New Zealand. Some of these invasions have failed or resulted in uncertain establishment (Froese and Pauly 2018). Another source of uncertainty is the frequent confusion of Black and Brown Bullheads (Copp et al. 2015). Brown Bullheads were first introduced to reservoirs in southwestern Puerto Rico in 1915 and are established in many reservoirs (Lever 1996, USGS Nonindigenous Aquatic Species Program 2018). Between 1871 and 1950, both Black and Brown Bullheads were introduced to 21 different European countries, and transferred between countries. Most of the introductions were assumed to be Brown Bullheads, but many were later identified as Black Bullheads (Lever 1996; Copp et al. 2016; Froese and Pauly 2016). In 1877, 140 or 225 Brown Bullheads misidentified as 'Pimelodus cattus' were stocked in lake in Auckland, New Zealand, and rapidly reproduced, and is now established in many lakes and rivers on the North and South Islands, where it is often caught by eel fishers (Lever 1996).

Brown Bullheads (Ameiurus nebulosus) are freshwater catfish. Bullhead Catfishes (Ictaluridae) have four pairs of barbels, no scales, an adipose fin, stout spines at the origins of the dorsal and pectoral fins, and abdominal pelvic fins. The caudal fin of the Brown Bullhead is rounded or nearly straight. The base of the anal fin is relatively short, and rounded with 20-24 rays, with the anterior rays shorter than the posterior ones. The dorsal fin has one spine and six rays. The rear edge of the pectoral spines has 5-8 saw-like teeth. Adults can reach 500 mm but are usually below 300 mm. Brown Bullheads are olive to brown above, with dark brown of black mottling, yellow-olive on the sides, and white to yellow below, with dusky to black fins. The chin barbels are dark (Page and Burr 1991; Jenkins and Burkhead 1993; Murdy et al. 1997; Moyle 2002).


Ameiurus natalis
Ameiurus natalis (Yellow Bullhead) is native to the Atlantic Slope and Mississippi-Great Lakes basin, and has been introduced to the San Francisco estuary and the Columbia River. The tail is squared-off, the pectoral spine has sawlike teeth, and the chin barbels are white or yellow (Page and Burr 1991).

Ameiurus nebulosu
Ameiurus nebulosus (Brown Bullhead) is native to the Atlantic Slope and Mississippi-Great Lakes basin, and has been introduced to the San Francisco estuary and the Columbia River and Fraser Rivers. The tail is squared-off, the pectoral spine has saw-like teeth, and the chin barbels are dark. The body has dark brown mottling (Page and Burr 1991).

Amieurus catus
Ameiurus catus (White Catfish) is native to the Atlantic Slope and has been introduced to the San Francisco estuary and the Columbia River. The tail is forked, the pectoral spine has saw-like teeth, and the chin barbels are white (Page and Burr 1991).

Amieurus melas
Ameiurus melas (Black Bullhead) is native to the Mississippi-Great Lakes basin, and has been introduced to the San Francisco estuary and the Columbia River. The tail is squared-off, the pectoral spine lacks sawlike teeth, and the chin barbels are dark (Page and Burr 1991).

Brown Bullheads (Ameiurus nebulosus) are freshwater catfish. Male and females do not have obvious morphological differences. Given their range of habitats, Brown Bullheads probably vary greatly in growth and life history according to environment and crowding. Adults mature in 2-3 years, at ~178 mm. Males tend to be larger than females. Spawning occurs at 14-29 C (Jones et al. 1978; Jenkins and Burkhead 1993). Brown Bullheads can spawn in an open excavated nest, or in the shelter of natural objects, such as logs, rocks, and vegetation, or in artificial objects, such as flowerpots, tires, tin cans, or cement blocks (Wang 1986; (Jones et al. 1978; Jenkins and Burkhead 1993). Females contain 2,000-13,000 eggs (Jones et al. 1978). During spawning, the male and female often embrace in a head-to-tail fashion, with the males' tail curled around the female's head. The eggs are guarded by the male, or the female, but or by both parents. Prolarvae remain in the nest until the yolk-sac is absorbed. When the yolk-sac is absorbed, fin-ray development is complete, and the fish are juveniles, Like other bullheads, the juveniles swim in dense schools in shallow water. Brown Bullheads can live for 7 to 10 years (Jones et al. 1978; Wang 1986; Jenkins and Burkhead 1993).

Brown Bullheads range from cold-temperate to subtropical climates and tolerates temperatures from near 0 C in ice-covered rivers in winter, to 37.5 C (Jones et al. 1978). Adults tolerate salinities up to 10 PSU in the field (Jones et al. 1978). Their habitats include 'pools, and sluggish runs over soft substrates in creeks and small to large rivers, impoundments, oxbows, and ponds (Page and Burr 1991). They occur 'mostly in the shallow vegetated areas in the sloughs of the Delta; shallow water of reservoirs, such as Millerton Lake, Folsom Lake; small ponds, such as Heather Farm Pond of Walnut Creek; stagnant weedy creeks, such as the Napa River (this study)'; (Turner 1966a, cited by Wang 1986). Brown Bullheads are omnivorous and eat aquatic plants, benthic invertebrates, and small fishes (Jenkins and Burkhead 1993). In the Delta, these fish were feeding predominantly on amphipods, isopods, crayfish, dragonfly larvae, and snails (Moyle 2002). Predators include larger fish, birds, and humans.

Brown Bullheads (Ameiurus nebulosus) have been introduced around the world as a food and sport fish. Fish from clean water can provide pleasant sport, and have good flavor, but once established in muddy or polluted water, they are often under-appreciated (Moyle 2002). Brown Bullheads are a potential predator on and competitor with many small native fishes (Nowosad and Taylor 2012; Dextrase and Mandrak 2012).

Fisheries- Brown Bullheads were widely introduced in inland waters in the Western states, and are a popular sportfish, but they are regarded as a pan-fish, and are not targeted as major game-fish (Moyle 2002). In San Francisco Bay, they are less abundant than the White Catfish (Ameiurus catus) or the Channel Cafish (Ictalurus punctatus), which are larger and preferred by the sport fishery (Dill and Cordone 1997; Moyle 2002). In the Columbia River, where Brown Bullheads were the primary catfish in the 19th and early 20th century, they did support a commercial fishery from 1894 to 1915, and were declared a gamefish (Lampman 1946). (Nowosad andTaylor 2012; Dextrase and Mandrak 2012).

Although widely introduced, few specific negative impacts are reported, but they are still often regarded as an undesirable invasive species (Invasive Species Specialist Group 2018). On Vancouver Island, Canada, predation on eggs by Brown Bullhead has led to extinction of four endemic stickleback species pairs (Gasterosteus spp.) (Dextrase and Mandrak 2006). In experiments with fishes from the Fraser River, British Columbia, the presence of Brown Bullheads caused reduced growth and mortality of Brassy Minnows (Hybognathus hankinsoni) from an isolated, disjunct native population. In these experiments the reduced growth was presumed to be due to competition and aggression of Brown Bullheads (Nowosad and Taylor 2013). In Europe, nest guarding, and territoriality is an unusual habit in European fishes, and deprives native species of space for foraging.