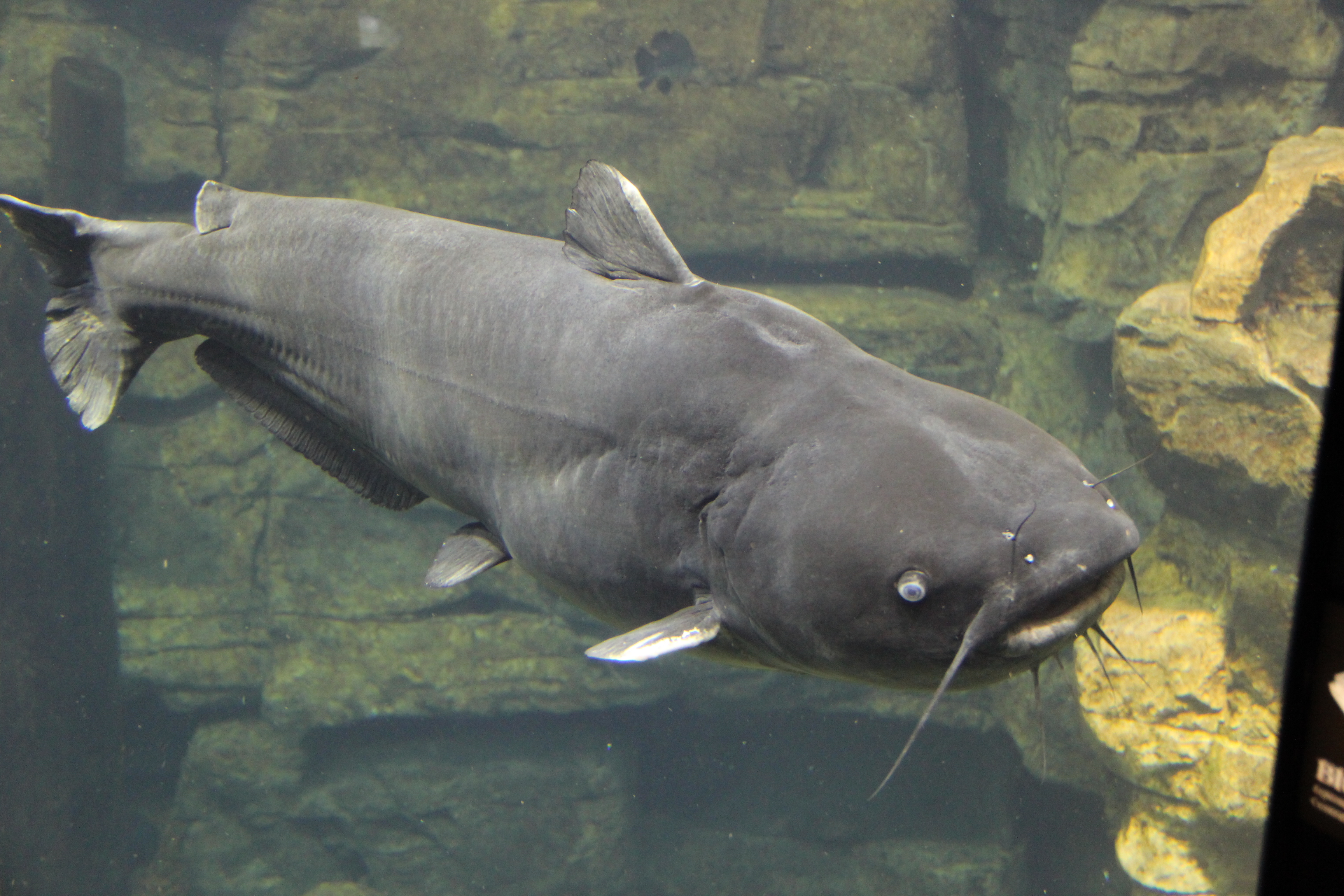 Blue Catfish (Ictalurus furcatus) are native to Mississippi and Gulf of Mexico drainages north to Pennsylvania and South Dakota, and south to the Gulf Coast. They can grow really large and are a popular gamefish as a result. Most of their introductions on the East and West Coasts have been intentional stockings for sport and commercial fishing. The have been introduced from Georgia to Maryland and Delaware. In the interior, they have been introduced to Arizona, Colorado, Idaho, western Washington and Oregon. On the west coast they are introduced to southern California and the San Francisco Bay watershed. They are large predators that eat a large variety of fish, but their impacts haven’t been studied outside on Chesapeake Bay. Their main impact is as a predator on native fishes.

Blue Catfish (Ictalurus furcatus) are native to Mississippi and Gulf of Mexico drainages north to Pennsylvania and South Dakota, south to the Gulf Coast (Alabama to the Rio Grande basin and Soto La Marina basins in New Mexico, Texas, and Mexico) (Page and Burr 1991; Froese and Paul 2018). These fish have been stocked on the Atlantic Slope from Georgia to Virginia, and have colonized estuaries in Maryland, with one record in Delaware. In the interior, they have been introduced to Arizona, Colorado, Idaho, western Washington and Oregon (Lee et al. 1980; Page and Burr 1991; Fuller et al. 1999; USGS Nonindigenous Aquatic Species Program 2018). They were introduced to the southern California in 1969. They were first caught in the San Francisco Bay watershed in 1978 and are established but rare in the Delta (Cohen and Carlton 1995; Dill and Cordone 1997).

The first stocking of Blue Catfish in California involved a batch of 1755 fish introduced to Lake Jennings, in San Diego County, by the California Department of Fish and Game. The justifications were to provide biocontrol of the Asian freshwater clam Corbicula fluminea, and to provide trophy-sized fish for anglers. Since then, Blue Catfish were introduced to many watersheds in Southern California (Dill and Cordone 1997). In 1978, one fish was caught in the San Joaquin River, and in Clifton Court Forebay in 1986. These fish may have escaped from an aquaculture operation in the Central Valley (Dill and Cordone 1997). Blue Catfish are established but rare in the Sacramento-San Joaquin Delta (Cohen and Carlton 1995; USGS Nonindigenous Aquatic Species Program 2018). In 2017, an 830 mm fish was caught in Clear Lake, in the Sacramento River basin (http://www.foxnews.com/great-outdoors/2017/07/12/monster-catfish-reeled-in-by-california-fisherman.html).

Blue Catfish (Ictalurus furcatus) on the East Coast, especially the Potomac River, where believed to be introduced as an accidental contaminant of stocks of Channel Catfish (I. punctatus) by the United States Fish Commission at the turn of the century (Smith 1907). However, preserved voucher specimens labelled as I. furcatus were actually I. punctatus (Burkhead et al. 1980), so these early reports are unverified. In the 1960-70s, state fisheries agencies began stocking Blue Catfish to attract trophy fishermen with giant fish. The first planting was in 1964 to Lake Marion, South Carolina, which is in the Santee-Cooper river system. Subsequent state first introductions were: Georgia (1971, Savannah River), North Carolina (1975, Cape Fear and Neuse Rivers), and Virginia (1974-1977, Rappahannock and James Rivers) (Dahlberg and Scott 1979; Jenkins and Burkhead 1993; USGS Nonindigenous Aquatic Species Program 2018). In each state, Blue Catfish rapidly dispersed up and down rivers, and was officially and informally introduced to other tributaries. In some cases, such as the Satilla River, Georgia (Bonivecchio et al. 2012) and the Northwest River, a Back Bay tributary (Tolliver 2016). Blue Catfish are believed to have migrated through brackish water in the Intracoastal Waterway.

Blue Catfish were stocked in Chesapeake Bay watershed starting in the 1980s. In 1987 they were caught at Haines Point, in the Potomac River. They were stocked in reservoirs in the Occoquan basin, a Potomac tributary in the 1980s, so this fish could have been dispersed from there, or could have migrated from the Rappahannock, during time of high river flow (Nammick and Fulton 1987). Sizes of record fishes in the James and Rappahannock estuaries were reported in fishing columns and increased through the 80s and 90s. Catfish were first stocked in the Mattaponi River in 1985, and now occur in the Pamunkey and York Rivers as well. Since 1990, abundance of Blue Catfish has fluctuated in Virginia rivers, but peak abundances have become successively larger (Greenlee and Lim 2011; Schloesser et al. 2011). By 2002 Blue Catfish were widespread and increasing in abundance in the tidal freshwater Potomac (Starnes 2002). From 2008-2010, populations of Blue Catfish have established in the fresh-oligohaline tidal regions of the Patuxent, Nanticoke, Sassafras, and Susquehanna Rivers (Maryland Department of Natural Resources 2010; Schloesser et al. 2011). On August 3, 2011, a specimen was caught at Conowingo Dam, at the head of Chesapeake Bay (USGS Nonindigenous Aquatic Species Program 2018). Blue Catfish range extensions presumably resulted from a mixture of releases by fishermen and natural dispersal. The brackish waters of Chesapeake Bay have been less of a barrier than biologists had expected, these fish have been caught at salinities as high as 15 PSU (Schloesser et al. 2011). They have apparently dispersed across the Bay, or have been introduced, to the Nanticoke River, on the Eastern shore. The first catch there was in Seaford, Delaware in 2010 (USGS Nonindigenous Aquatic Species Program 2018). Multiple record-sized fish have been caught there.

Blue Catfish have been caught in the Christiana River, a tributary of the Delaware estuary, but their establishment there is unknown (2013, Rob Aguilar, personal communication; Delaware Division of Fish and Wildlife 2017).

Blue Catfish (Ictalurus furcatus) are large predatory Bullhead Catfishes in the family Ictaluridae. Fish in this family have four pairs of barbels, no scales, an adipose fin, stout spines at the origins of the dorsal and pectoral fins, and abdominal pelvic fins. The tail fin of the Blue Catfish is deeply forked, with rounded lobes. The adipose fin has a short base, with its free end free at the back, and far from the caudal fin. The base of the anal fin is relatively long, and tapered rearward, with a straight edge and 30-35 rays. The pectoral spines are stout and strongly serrated. The dorsal fin is relatively short, with one spine and six soft rays. The head is broad and depressed. Adults can reach 1650 mm but are usually less than 600 mm. A 1000 mm fish can weigh 23 kg (50 lb.) Blue Catfish are blue-black above, and silver-blue. silver-gray, or white below. They lack the small black spots that usually occur on the Channel Catfish (I. punctatus). The chin barbels are pale, while the other barbels are dusky (Page and Burr 1991; Jenkins and Burkhead 1993; Murdy et al. 1997; Moyle 2002).

Ameiurus catus
Ameiurus catus (White Catfish) is native to the Atlantic Slope, and has been introduced to the San Francisco estuary and the Columbia River. The tail is forked, the pectoral spine has saw-like teeth, and the chin barbels are white. It is smaller than Blue or Channel Catfish (950 mm) (Page and Burr 1991).

Ameiurus melas
Ameiurus melas (Black Bullhead) is native to the Mississippi-Great Lakes basin and has been introduced to the San Francisco estuary and the Columbia River. The tail is squared-off, the pectoral spine lacks saw-like teeth, and the chin barbels are dark (Page and Burr 1991).

Ameiurus natalis
Ameiurus natalis (Yellow Bullhead) is native to the Atlantic Slope and Mississippi-Great Lakes basin and has been introduced to the San Francisco estuary and the Columbia River. The tail is squared-off, the pectoral spine has saw-like teeth, and the chin barbels are white or yellow (Page and Burr 1991).

Ameiurus nebulosus
Ameiurus nebulosus (Brown Bullhead) is native to the Atlantic Slope and Mississippi-Great Lakes basin and has been introduced to the San Francisco estuary and the Columbia River and Fraser Rivers. The tail is squared-off, the pectoral spine has saw-like teeth, and the chin barbels are dark. The body has dark brown mottling (Page and Burr 1991).

Blue Catfish (Ictalurus furcatus) are large predatory freshwater catfish that do enter brackish water. The two sexes are not morphologically distinguishable. They mature at about 400-600 mm, at an age of about 4 years (Carlander 1969; Jenkins and Burkhead 1993). Spawning occurs at 21-24 C. Both sexes prepare a nest in sand or gravel and guard it. Fecundity is roughly estimated at 4,000-18, 000 eggs. Eggs and young are guarded by both sexes. They can be long-lived, a 41 kg specimen was 21 years old (Jenkins and Burkhead 1993). In Virginia tributaries of Chesapeake Bay, growth rate has decreased from 1998-2000 to 2014-2017, probably reflecting more intraspecific comptition (Nepal edt al. 2020).

Blue Catfish range from cold-temperate to subtropical climates. Adults have been collected at 15 PSU in the field (Schloesser et al. 2011). Their habitats include: pools, and sluggish runs over soft substrates in creeks and small to large rivers, impoundments, oxbows, and ponds (Page and Burr 1991). They are omnivorous, but because of their large size, they function as apex predators. In surveys of fish from Chesapeake tributaries, researchers reported their diet to include a lot detritus and plant matter. Fish <300 mm tend to consume more invertebrates, while large fish consume more fishes. Prey composition varied among tributaries and with season, indicating considerable opportunism (Groves and Love 2010; Schloesser et al. 2011); Schmitt et al. 2019). A DNA study of catfish gut contents indicates that Blue Catfish eat a greater quantity and variety of fishes then Channel Catfish (I. punctatus) or White Catfish (Ameiurus catus). Common prey are Menhaden (Brevoortia tyrannus), American Shad (Alosa sapidissima), River Herring (A. pseudoharengus, A. aestivalis), Gizzard Shad (Dorosoma cepedianum), White Perch (Morone americana), and Channel Catfish (Aguilar et al. 2017). Stable isotope studies show that during the spring migration of river herring and shad, the isotopic composition shifted from a freshwater to a marine profile, as a result of feeding on fish newly arrived from the sea (MacAvoy et al. 2000). Overall, Blue Catfish are omnivores, with one of the broadest feeding spectra known (Schmitt et al. 2019).

Blue Catfish (Ictalurus furcatus) have been introduced to many East Coast tributaries, and in the San Francisco Bay watershed. However, detailed studies of their predatory impacts and resulting implications for fisheries and conservation are largely focused on Chesapeake Bay. Blue Catfish can be giant, sometimes exceeding 23 kg (50 lbs), which makes them a major attraction for fishers. In the 1960s and 70s fisheries agencies use their large size to justify official introductions and unofficial transfers. In more recent decades, agencies are more concerned about biodiversity and conservation of native fisheries stocks, especially migratory species (MacAvoy et al. 2010; Groves and Love 2010). In Chesapeake Bay, commercial fishing of Blue Catfish is being promoted and the fish is often mentioned in restaurant advertisements (NOAA Chesapeake Bay Office 2018).

Bean, Barton A.; Weed, Alfred C. (1911) Recent additions to the fish fauna of the District of Columbia, Proceedings of the Biological Society of Washington 24: 171-174

Starnes, Wayne C. (2002) Current diversity, historical analysis, and biotic integrity of fishes in the lower Potomac basin in the vicinity of Plummers Island, MD, Proceedings of the Biological Society of Washington 115(2): 273-320