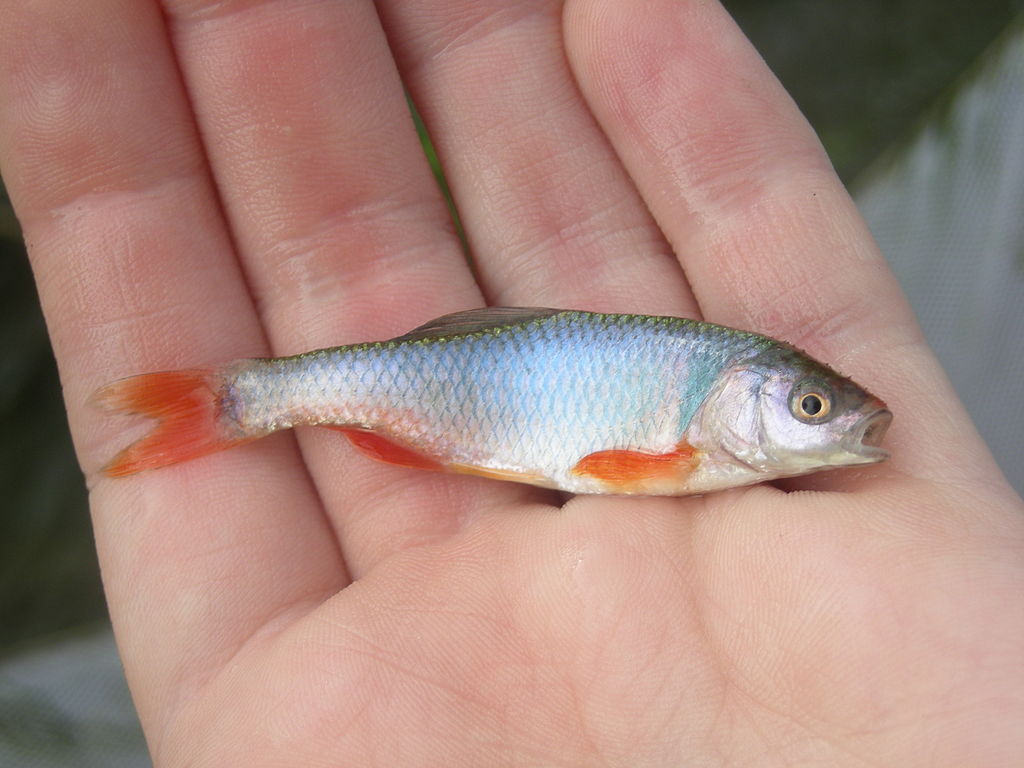 Red Shiners (Cyprinella lutrensis) are small freshwater minnows native to the Mississippi River basin from south Wisconsin and western Indiana to South Dakota and Wyoming, and south from Mississippi to New Mexico, and also northern Mexico. They are a baitfish and aquarium fish with exceptional colonizing abilities demonstrated through their introduction to fifteen states. Introduced populations can be found in the Appalachians from Alabama to Virginia, in the Colorado River and its tributaries, north to Wyoming, and in southern California. Competition and hybridization are the main reported impacts in their introduced range, but the largest impacts of the Red Shiners are on isolated populations of fishes in desert and prairie springs and streams.

Red Shiners (Cyprinella lutrensis) are native to the central and western Mississippi River basin from south Wisconsin and western Indiana to South Dakota and Wyoming, and south from Mississippi to New Mexico, and also northern Mexico (Page and Burr 1991; Froese and Pauly 2018). They are a widely used baitfish and an occasional aquarium fish with exceptional colonizing abilities. Introduced populations occur in 15 states (USGS Nonindigenous Aquatic Species Program 2018). In the East, there are scattered introduced populations in the Appalachians from Alabama to Virginia. In the West, there more extensive populations in the Colorado River and its tributaries, north to Wyoming (Poulos et al. 2012; USGS Nonindigenous Aquatic Species Program). In the 1980s, they were found in several creeks in southern California (Swift et al. 1993), and in the San Joaquin Valley (Jennings and Saiki 1990). By 1999, they were found at the head of the San Joaquin Delta (.USGS Nonindigenous Aquatic Species Program).

Red Shiners were reared for bait and catfish-food at an Arizona fish farm on the Colorado River, and escaped and colonized streams on the Colorado side of the river in 1953. Some fish were brought to the Central Valley Hatchery for use as forage fish, in Sacramento County, but were not stocked (Dill and Cordone 199). However, the Colorado River populations did spread rapidly, becoming abundant in freshwater streams into the Salton Sea by 1976. In 1983, they were found in Big Tujunga Canyon, east of Los Angeles. In 1986, in San Diego Creek, at the head of Newport Bay, and in the lagoon at the mouth of San Juan Creek (Swift et al. 1993). Occurrences in these small Southern California estuaries are likely to fluctuate with rainfall and stream flow.

Red Shiners have been introduced and are established from streams in the Appalachian Mountains from Alabama to Virginia, but have not been reported from the Coastal Plain (USGS Nonindigenous Aquatic Species Program 2018). A population was found in 1972 in a pond near the Connecticut River in Chicopee, MA, but is now extinct. In the Great Lakes region, they were reported from lagoons bordering Lake Michigan in Chicago, in 1958, but there are no recent records (USGS Nonindigenous Aquatic Species Program 2018).

Given the prevalence of this fish in the bait industry, further introductions are likely. Maxtent modeling indicates that potential invasions are likely in southern and central coastal California, and along the southern Appalachians, but not on the southern Coastal Plain (Poulos et al. 2012).

The Red Shiner is the only Cyprinella on the West Coast, where it is introduced, but there are 21 species in Eastern and Gulf drainages (Page and Burr 1991). As a widely sold baitfish, Red Shiners have been widely introduced east and west of their native range, and has hybridized with other Cyprinella spp. (Poulos et al. 2018; Walters et al. 2018). Cyprinella lutrensis, itself, appears to be a complex of four genetically divergent lineages, which may, themselves, deserve species status. Populations in the western USA are a mixture of western and mid-western lineages, while eastern USA populations come from the mid-western lineage. Genetic evidence supports multiple independent introductions in both regions (Glotzbecker et al. 2016). Hybridization of these mixed populations with native species may pose challenges for future geneticists, taxonomists, and conservationists

Red Shiners (Cyprinella lutrensis) are small freshwater minnows. Breeding males develop bright colors, and tubercles on the head, sides, and fins. Males can start breeding at 30 mm, when less than one year old, but more usually breed in their second year (Moyle 2002). Males can defend territories and attract females, but they can also chase females. Males and females swim side by side while courting. The males use the tubercles to attach to the female. Eggs are laid on aquatic plants, tree roots, and gravel (Moyle 2002). Females are fractional spawners, meaning they release of eggs at intervals. Their total fecundity ranges from 485 to 1,200 eggs (California Fish Website 2018).

Red Shiners are tolerant of a wide range of conditions, and habitats, including temperature extremes, intermittent streams, hypoxic conditions, acidity, and alkalinity. They are often most abundant in conditions that other species do not tolerate (Page and Burr 1991; Moyle 2002; Poulos et al. 2012; Leidy 2007; California Fish Website 2018). They have been collected in hot springs at 39.5 C, at sites where winter air temperatures reach -20 C, and at pH range from 4 to 11 (Poulos et al. 2012; California Fish Website 2018). In an uncontrolled experiment, with only two fish, Red Shiners tolerated a salinity of 10.5 PSU (Renfro 1959). In the San Joaquin valley, Red Shiners preferred habitat in shallow, silty, slow-moving streams with vegetative cover. They are often seen swimming in schools. They feed on small insects, crustaceans, and algae (Moyle 2002). As a small minnow, Red Shiners are vulnerable to predators, but they are common in habitats where predators are scarce.

Red Shiners (Cyprinella lutrensis) are currently rare in tidal waters on the West Coast. Their widespread use in the live-bait trade means that they are potential invaders in much of North America (Poulos et al. 2012), additionally they are also sold and kept as an aquarium fish (de’Vivo 1995). The largest impacts of the Red Shiners are on isolated populations of fishes in desert and prairie springs and streams (Poulos et al. 2012).

Red Shiners (Cyprinella lutrensis) are commercially reared and sold as bait fishes because of their tolerance of temperature extremes, crowding and low oxygen conditions typical of bait-buckets. They are illegal to use as bait in some states, including Georgia (deVivo 1995), because of the risk of competition and hybridization with other species. In 1979, the California Fish and Game Commission attempted to ban the use of this fish for bait outside the Colorado River valley, but because of protests from the fishing community, the Commission compromised and allowed their restricted use in Northern California (Dill and Cordone 1997).

In the western part of its introduced range, the Colorado basin, and the Great Basin, Red Shiners are aggressive competitors with endemic fishes in desert and prairie springs and streams, including Red River Pupfish (Cyprinodon rubrofluviatilis, Fowler, 1916), Colorado Pikeminnow (Ptychocheilus lucius, Girard, 1856), Spikedace (Meda fulgida, Girard, 1856), and Razorback sucker (Xyrauchen texanus, Abbott,1861) (Poulos et al. 2012). In the eastern part of its introduced range, where it coexists with other species of Cyprinella, hybridization with native fishes, as well competition, is a concern (deVivo 1995; Walters et al. 2018).