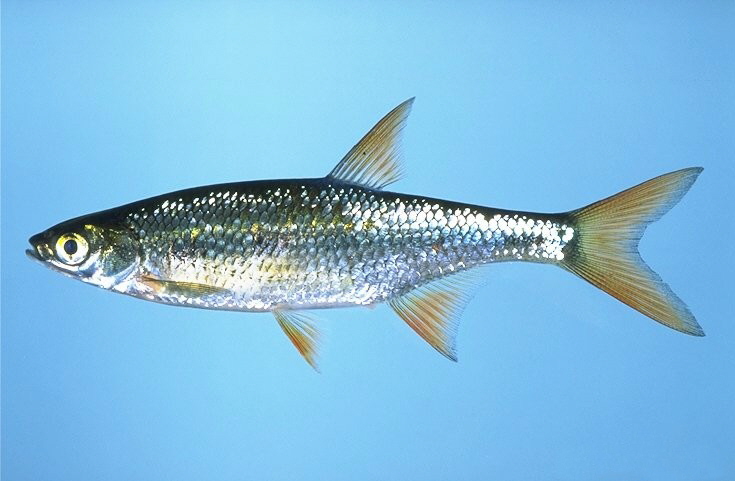 Golden Shiners (Notemigonus crysoleucas) are native to eastern North America. They have been a popular bait fish and are commercially raised for this purpose. Through bait release and intentional introductions as a forage fish they are now among the top 10 most widely introduced fishes across the western United States. They have been introduced from Montana to Washington, and New Mexico to California. They have economic importance for the bait industry. They could have negative effects in lakes, if unchecked by predators, However, no specific impacts have been reported from the San Francisco or Columbia estuaries.

Golden Shiners were stocked as forage fish throughout California starting in San Diego County in 1891, and further dispersed by fishermen discarding bait. In 1950, they were planted in Clear Lake, in the San Francisco Bay watershed, and by 1964, they were found in the Sacramento-San Joaquin Delta (Dill and Cordone 1997). They are now very abundant in freshwater-tidal parts of the Delta, and occasionally occur in brackish Suisun Bay (Cohen and Carlton 1995; Matern et al. 2002). In two 1992-1999 surveys, they were the 5th or 6th most abundant species in freshwater portions of the South Delta (Feyrer and Healy 2003; Grimaldo et al. 2012), and common in other surveys (3-5 % of abundance, 1980s vs. 2000s, Brown and Michniuk 2007).

Lavinia exilicauda
Lavinia exilicauda (Hitch) is a deep-bodied minnow native to central California drainages from the Russian River to Monterey Bay. It is brown above, with silvery sides, and can reach 360 mm length (Page and Burr 1991).

Scardinius erythropthalmus
Scardinius erythropthalmus (Rudd) is a deep-bodied minnow with a scaled ventral keel, a silvery body, and red fins. It is native to Eurasia, and has been introduced to the Great Lakes, Hudson River, and scattered waters across the Eastern and Midwestern US as a baitfish (Page and Burr 1991; USGS Nonindigenous Aquatic Species Program 2018).

Golden Shiners (Notemigonus crysoleucas) are small to mid-sized freshwater fish. Males and females are nearly identical, but males develop a more intense golden color on their body and fins. They take between seven months and three years to mature, but most reach maturity in the second year at 50-70 mm (Jones et al. 1978). The spawning season varies with latitude but is March-August in California and the mid-Atlantic US, at 20-27 C (Jones et al. 1978; Wang 1986; Moyle 2002). Fish spawn in schools, with females dropping their eggs on submerged vegetation or debris, and males fertilizing them. The eggs are 1.0-1.4 mm in diameter and adhesive. Females will sometimes lay their eggs in the excavated nest of a Largemouth Bass, which is then guarded by the male bass (Moyle 2002). This increases the chance of survival of the eggs and larvae. Females may carry up to 200,000 eggs (Jones et al. 1978). The eggs hatch in 3-4 days at 17 to 24 C. Larvae remain on the bottom until the yolk sac is absorbed, and then swim in schools close to shore (Moyle 2002).

Golden Shiners have a native range of about 20 degrees of latitude, which includes cold-temperate to subtropical climates, and a wide range of habitats including lakes, slow-flowing streams, large rivers, swamps, and estuaries. They prefer relatively warm, still, or slow-flowing waters, with dense vegetation (Jones et al. 1978; Wang et al. 1986; Moyle 2002). These fish tolerate low oxygen levels (Moyle 2002). Golden Shiners have been collected at 14 PSU in Chesapeake Bay (Hildebrand and Schroeder 1928). Foods include zooplankton (especially the cladoceran, Daphnia spp., small flying insects, benthic invertebrates, algae, and occasionally, small fishes (Hildebrand and Schroeder 1928; Moyle 2002). Golden Shiners are vulnerable to large predatory fishes. In a survey in the San Francisco estuary, one was found in the stomach contents of a Largemouth Bass (Nobriga and Feyrer 2007). They are widely raised and used as bass bait (Dill and Cordone 20007).

The Golden Shiners (Notemigonus crysoleucas) have been widely reared and sold in the United States as a bait fish, and sometimes deliberately stocked as a forage fish in order to support populations of game fishes, particularly Largemouth Bass (Micropterus salmoides). They have a positive economic importance to the bait industry but could have negative effects in lakes and reservoirs, if unchecked by predators. Golden Shiners can deplete the zooplankton populations in a lake, which could limit recruitment of gamefishes, although more often they do not reach the level of abundance needed to support an increased gamefish population (Dill and Cordone 1997). In one case, introduction of Golden Shiners to a fishless lake led to a trophic cascade, in which depletion of the zooplankton led to algal blooms and reduced water clarity (Richardson et al. 2016). However, specific impacts of Golden Shiners have not been reported from the San Francisco or Columbia estuaries. Dill and Cordone (1997) considered the value of its introduction to California to be debatable (Dill and Cordone 1997).