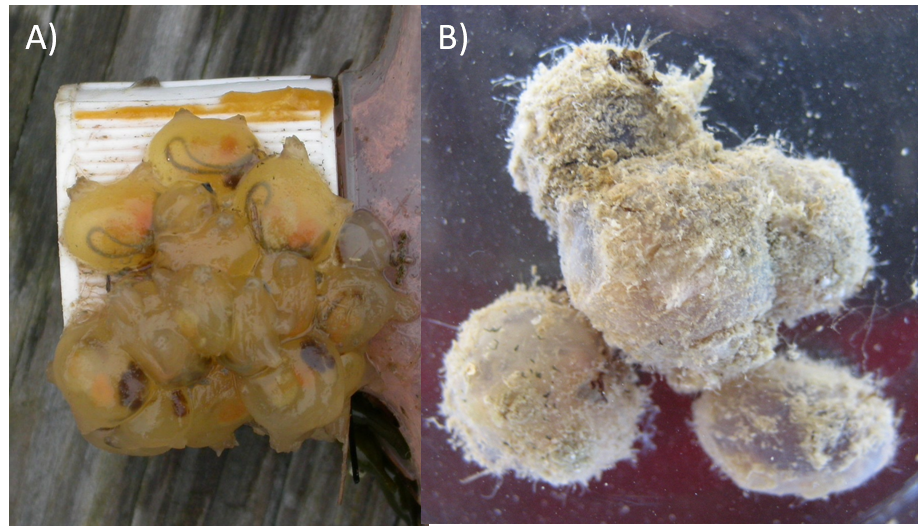 Molgula citrina is a small, globular shaped, solitary tunicate. It was described from the British Isles and its range extends throughout the North Atlantic, including North America and Europe. In 2008, it was reported from Alaska and was subsequently found as introduced in Oregon and Northern California. It may have traversed Arctic waters as biofouling in a vessel's sea-chest, which is heated to protect against engine freezing. No ecological or economic impacts have been reported for this species in introduced locations.

Molgula citrina is a small, solitary tunicate, described from the British Isles and known primarily from the North Atlantic. In European waters, it is known from Roscoff, France to Svalbard and the White Sea (Dybern 1969; Monniot 1969; Gulliksen et al. 1999; Shenkar and Swalla 2010; Khalaman et al. 2011). Off the Atlantic coast of North America, it is known mostly from shallow water (less than 30 m) from Narragansett Bay, Rhode Island to the Gulf of St. Lawrence, Canada (Van Name 1945). Museum specimens are known from the continental shelf as far south as Delaware in deeper water (65-90 m, U.S. National Museum of Natural History collections). A specimen has also been collected in the Arctic Ocean, near Northumberland Island, off the west coast of Greenland (1926, USNM 14982, U.S. National Museum of Natural History 2015, 77.4°N).

In 2008, many specimens of M. citrina were collected from Seldovia, Alaska on Kachemak Bay, the first verified records of this species from the Pacific Ocean. The genetic similarity of these specimens to Atlantic populations suggests that they were introductions from the North Atlantic, rather than part of a natural circumpolar distribution, given this tunicate's limited larval dispersal (Lambert et al. 2010). Subsequently, M. citrina was found in Umpqua Bay, Oregon and Humboldt Bay, California (Gretchen Lambert, personal communication 2010 Chapman et al. 2011).

In 2008, many specimens of Molgula citrina were collected from floating docks and ropes in Seldovia, Alaska on Kachemak Bay, the first verified records of this species from the Pacific Ocean. The genetic similarity of these specimens to Atlantic populations suggests that they were introductions from the North Atlantic, rather than part of a natural circumpolar distribution, given this tunicate's brooded larvae and limited larval dispersal (Lambert et al. 2010). Large M. citrina populations were discovered in the Umpqua estuary, Oregon in 2010 (Chapman et al. 2012) and in Humboldt Bay, California in 2011 (Gretchen Lambert, personal communication 2011). Hull fouling is the most likely vector for the introduction of these tunicates. The fouling of sea-chests, which are heated in Arctic waters to protect the engines, is a likely vector for the transport of M. citrina through the Arctic Ocean (Lambert et al. 2010). Both Humboldt Bay and the Umpqua estuaries are also sites of oyster culture, a potential vector for future transport to other estuaries.

Collections of the U.S. National Museum of Natural History included specimens identified as M. citrina, which were collected from 1893 to 1960 in Alaska (the Chukchi Sea, Pribilof Islands and Bristol Bay), but these have been re-identified as M. pacifica and M. retortiformis (U.S. National Museum of Natural History 2015; Gretchen Lambert personal communication).

Molgula citrina is globular shaped and is sometimes attached or broadly flattened in the ventral region. Its tunic is tough and firm, but its outer surface varies from smooth to rough, with rougher tunics having attached sand and detritus. The siphons arise from the dorsal surface some distance apart, with the oral siphon near the anterior end and the atrial siphon near the middle. The oral siphon is often wider and has six narrow pointed lobes, while the atrial siphon is narrower, but longer when extended, and has a square opening. The siphons sometimes have short, spiny processes on their external surfaces (whence the synonym Molgula echinosiphonica). The larvae are brooded in the peribranchial cavities, adjacent to the gonads on the right and left side, and grow quite large, about 0.4 mm when coiled and about 1.4 mm when swimming at release. This tunicate is small, often 6-8 mm and rarely reaching 20-23 mm. The color is 'translucent, dull greenish or olive, between the tubes usually more -or less ferruginous brown or russet; on the sides the viscera show through as dull orange-colored and darker blotches' (Verrill 1871). It usually grows firmly attached to the substrate, often in groups of several individuals, sometimes with many young individuals clumped around the adults. Description based on: Verrill 1871, Van Name 1945, and Lambert et al. 2010.

Solitary ascidians are hermaphroditic, meaning that both eggs and sperm are released to the atrial chamber. Eggs may be self-fertilized or fertilized by sperm from nearby animals, but many species have a partial block to self-fertilization. In Molgula citrina, eggs are internally fertilized, eggs are brooded and fertilized within the atrial chamber and then released into the water column upon hatching. Fertilized eggs hatch into a tadpole larva with a muscular tail, notochord, eyespots, and a set of adhesive papillae. The lecithotrophic (non-feeding, yolk-dependent) larva swims briefly (minutes to hours) before settlement (Durante 1991; Lambert et al. 2010). Once settled, the tail is absorbed, the gill basket expands, and the tunicate begins to feed by filtering (Barnes 1983).

There are no ecological or economic impacts for introduced populations of M. citrina.

Khalaman, V. V.; Mukhina, Yu. I.; Komendantov, A. Yu. (2011) The effects of the excretory secretory products of fouling organisms on settlement of larvae of the sponge Halichondria panicea (Pallas, 1766) (Porifera: Demospongiae), Russian Journal of Marine Biology 93(9): 494-500