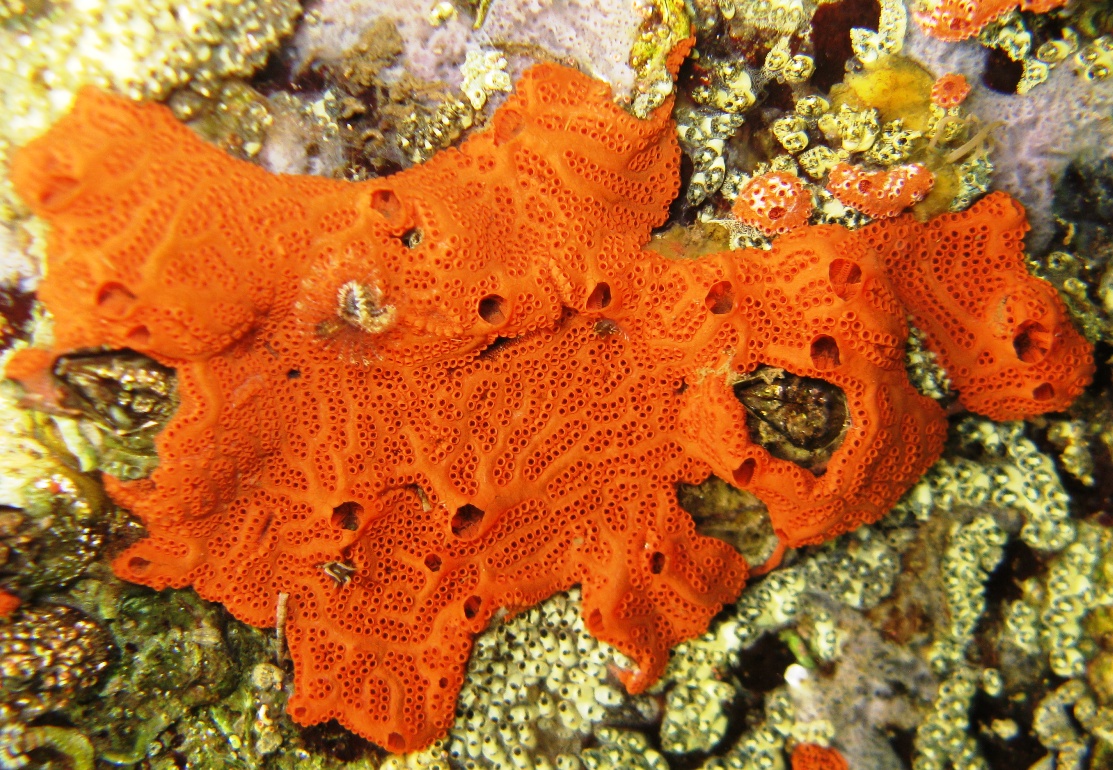 Botryllus planus is a colonial tunicate which can vary in color, ranging from being completely orange (as seen in the picture) to having zooids that are dark purple, purplish brown or black, with a white, pale green or golden yellow area surrounding the branchial opening of each zooid. It is native to the warm waters of the western Atlantic, from North Carolina, Bermuda, Panama, Curaçao, Colombia, Venezuela and Brazil. In North America, there is one record of this species from Chincoteague, Virginia, in 1994, but information on its establishment here is unknown, suggesting that it was a failed invasion. Throughout its range, B. planus can be found on both man-made and natural substrates, including floating docks, pilings, mangroves and rocky reefs. No impacts have been reported from introduced populations.

Botryllus planus is native to warm waters of the western Atlantic, from North Carolina and Bermuda to Panama, Curaçao, Colombia, and Venezuela (Van Name 1945; Monniot 1972; US National Museum of Natural History 2011). Da Rocha and Kremer (2005) considered B. planus native to Brazil, with a fairly continuous distribution, but noted a comparatively late first record (1969) in Rio de Janeiro province, and frequent occurrences with cultured oysters. In Brazil, this tunicate is found from the state of Ceara to the state of Sao Paulo (Da Rocha and Kremer 2005). In 1994, B. planus was collected in Chincoteague, Virginia, however information on its establishment in this area is unknown, suggesting that it was a failed invasion.

One record of Botryllus planus, from Chincoteague, Virginia, in 1994 (USNM 20714, US National Museum of Natural History 2011) appears to be an apparent introduction. This probably represents transport of a fouling organism by recreational boats moving up the coast. Its establishment in Chincoteague Bay is unknown. Several other disjunct records of subtropical organisms probably transported by boats, for instance the tunicate Ecteinascidia turbinata and the gastropod Eupleura sulcidentata, are also known from this estuary (Prezant et al. 2002).

Botryllus planus has been collected from Panama Bay, at the Pacific entrance to the Panama Canal. It is not known whether colonies could survive transport through the canal, or were introduced by another route or vector (in 2009, Carman et al. 2010).

Botryllus planus is a colonial tunicate with encrusting colonies. Colonies are often irregular in shape and several centimeters in greatest diameter. They are frequently so thin that the zooids are sometimes nearly parallel to the colonies surface, but in other cases, colonies are thicker and the zooids nearly upright. The color is very variable during life. Zooids range from orange, dark purple, purplish brown, or blackish with a white, pale green, or golden yellow area surrounding the branchial orifice of each zooid. The colonies' light colors fade after death to purple or brownish purple. 'Some specimens collected at Bermuda were bright orange when alive, this color suffusing the tunic as well as the zooids. The young zooids produced by budding are in many colonies differently colored than the adult ones from which they developed (Van Name 1945).

Zooids are smaller than 1.5 to 1.75 mm in length when preserved. Zooids have eight or fewer tentacles, and usually 11 to 13 rows of stigmata. 'The reproductive and digestive organs furnish the easiest means of distinguishing this species. The male organs consist of a single testis on each side of the body, situated posterior to the middle and so deeply cleft into numerous (10 to 20) rounded lobes that it appears like a rosette shaped mass of small separate glands. The female organs, at least in the adult state, consist of a single ovary on each side, each containing a large egg situated close, and directly anterior, to the testis. The stomach is oblong or barrel shaped though tapering somewhat more toward the pyloric end. The stomach has about nine complete glandular folds and one incomplete one, which increase gradually in prominence toward the esophageal end, and a very long tubular curved pyloric caecum that is slightly enlarged at the extreme end.' (Van Name 1945).

Life History- A colonial (or compound) tunicate consists of many, small zooids, bearing most or all of the organs of a solitary tunicate, but modified to varying degrees for colonial life. Colonial ascidians of the genera Botryllus and Botrylloides have small, flattened and curved zooids, arranged in systems, with groups of zooids having atrial canals opening into a common cloacal chamber. The zooids are embedded in a mass of tunic material. Each zooid has an oral siphon and an atrial canal, an opening to a shared cloacal chamber. The thorax contains an elaborate gill basket, and below it, a compressed abdomen, which contains the stomach, intestine, ovaries, testis, and heart.. The intestine leads back to the thorax and to the atrial opening. The abdomen ends in stolons, which are attached to the substrate and neighboring zooids. Water is pumped through the oral siphon, through finely meshed ciliated gills, where it is filtered and expelled through the oral siphon. Phytoplankton and detritus is filtered by the gills and passed on mucus strings to the stomach and intestines where waste is expelled in the outgoing atrial water (Van Name 1945; Barnes 1983).

Colonial ascidians reproduce both asexually, by budding, and sexually, from fertilized eggs developing into larvae. Buds can form from the body wall of the zooid. Colonies vary in size and can range from small clusters of zooids to huge spreading masses. The zooids are hermaphroditic, with eggs and sperm being produced by a single individual. Eggs may be self-fertilized or fertilized by sperm from nearby animals, but many species have a partial block to self-fertilization. Depending on the life-history of the species, eggs may be externally or internally fertilized. Fertilized eggs hatch into a tadpole larva with a muscular tail, notochord, eyespots, and a set of adhesive papillae. The lecithotrophic (non-feeding, yolk-dependent) larva swims briefly before settlement. Swimming periods are usually less than a day, and some larvae can settle immediately after release, but the larval period can be longer at lower temperatures. Once settled, the tail is absorbed, the gill basket expands, and the tunicate begins to feed by filtering (Van Name 1945; Barnes 1983). Botryllus planus is found in tropical and subtropical environments from North Carolina to Brazil (da Rocha and Kremer 2005; US National Museum of Natural History 2010; Lord et al. 2015). Botryllus planus is found in polyhaline and euhaline saliiities (Dijkstra et al. 2016). Botryllus planus is known from a wide range of natural and artificial surfaces, including rocks, mangroves coral reefs, oyster beds, marinas,floats and vessel hulls. It often grows on other organisms (Van Nsme 1945; Woods Hole Oceanographic Institution and United States Navy Department1952; Rodrigues and da Rocha 1993). Pr

Impacts of introduced Botryllus planus have not been reported.