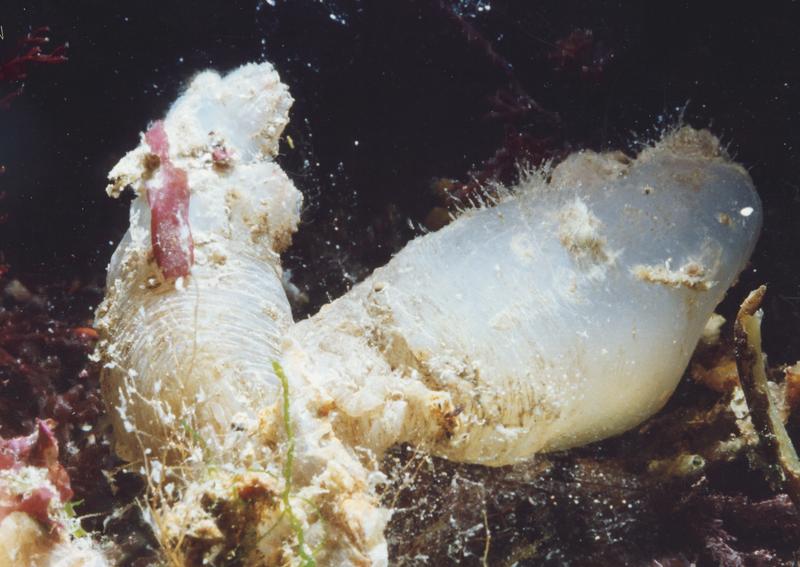 Ascidiella aspersa is a solitary tunicate that is oval-shaped and gray, black or brownish in color. It was first described from the Adriatic Sea in 1776 and is native to Europe from southern Norway to the Mediterranean. It has been introduced to the East and West Coasts of the United States, Argentina, South Africa, India, Japan, Korea, Australia, and New Zealand. It is common in fouling communities and has likely spread around the world as fouling on ship hulls. There are few reported impacts in its invaded range, but A. aspersa can foul aquaculture gear and compete with native species for space.

Ascidiella aspersa was described from the Adriatic Sea in 1776. Its native range extends from southern Norway and Denmark, through the English Channel and Irish Sea to the Mediterranean (Kott 1998). Ascidiella aspersa has been widely introduced around the world, including the northwest Atlantic from Connecticut to Maine, the southwest Atlantic (Argentina), the southeast Atlantic (South Africa), the Indian Ocean (India), and the southwest Pacific (Australia, New Zealand).

In 1983, Ascidiella aspersa was collected in the Cape Cod Canal (Richard Whittaker, personal communication to James T. Carlton) and in 1985, in Long Island Sound, probably near Avery Point, Connecticut. It now ranges from Long Island Sound to Mahone Bay, Nova Scotia (Whitlach and Osman 2000; MIT Sea Grant 2006; Moore et al. 2014). We have no records of this species between Long Island Sound and Chesapeake Bay, but we know of no recent studies of fouling organisms in this region. In the summer of 2002, tunics of A. aspersa were found on fouling plates in Chesapeake Bay, at Gloucester Point, in the York River (Ruiz et al., unpublished data), but live animals were not seen. Further sampling is needed to determine whether this tunicate is established in Chesapeake Bay. In 2012, the range of A. aspersa was extended north to Lunenburg Harbor, Nova Scotia, where extensive populations occurred in the inner harbor (Moore et al. 2014).

Ascidiella aspersa is abundant in parts of southern Australia, where it was probably introduced before 1899 (Kott 1985; Kott 1998; Keough and Ross 1999). In New Zealand, it was first collected in the early 1900s (Cranfield et al. 1998). It was recorded in India in 1976 from Madras on the Bay of Bengal (Nagabhushanam and Krishnamoorthy 1991). In 2010, A. aspersa was discovered in ports on the west, south, and east coasts of South Korea (Pyo et al. 2012). In 2012, it was found on the west coast of Hokkiado in northern Japan (Lutaenko et al. 2013). On the southern coast of South Africa, it occurs from Saldanha Bay to Port Elizabeth, but its date of introduction is unknown (Monniot et al. 2001). Across the Atlantic, in Argentina, it was first collected in several locations in 1962, and is now established in several harbors covering more than 5 degrees of latitude, from Chubut to Puerto Deseado (U.S. Museum of Natural History 2006; Tatián et al. 2010).

Ascidiella aspersa is a solitary tunicate. It is oval-shaped, wider near the base and narrower at the top where the two siphons protrude, the oral siphon extends off the top and the atrial siphon extends off the side about a third of the way down the body. It grows up to 130 mm long and is usually attached on the posterior left side. The siphons are short and conical (cone-shaped) and ridged with 8-10 branchial lobes and six atrial lobes. Papillae are scattered over the body surface, especially on the right side and near the apertures. The test (outer covering) is firm but thin, rough and gristly, gray, black or brownish in color, and often with attached debris (Kott 1985, MarLin 2006).

Solitary ascidians are hermaphroditic, meaning that both eggs and sperm are released to the atrial chamber. Eggs may be self-fertilized or fertilized by sperm from nearby animals, but many species have a partial block to self-fertilization. Depending on species, eggs may be externally or internally fertilized. In external fertilizers, eggs and sperm are released through the atrial siphon into the surrounding water column were fertilization takes place. The eggs of A. ascidiacea are unusual, because they float in seawater of 30-35 PSU (Berrill 1928, cited by Mackenzie 2011). In internal fertilizers, eggs are brooded and fertilized within the atrial chamber and then released into the water column upon hatching. Fertilized eggs hatch into a tadpole larva with a muscular tail, notochord, eyespots, and a set of adhesive papillae. The lecithotrophic (non-feeding, yolk-dependent) larva swims briefly before settlement. Swimming periods are usually less than a day and some larvae settle immediately after release, but the larval period can be longer at lower temperatures. Once settled, the tail is absorbed, the gill basket expands, and the tunicate begins to feed by filtering (Barnes 1983). The life cycle is annual, with animals becoming senescent within 18 months after settlement (Millar 1954, cited by Makenzie 2011).

Ascidiella aspersa can compete with native species for space and may impact the recruitment success of other species (Osman and Whitlach 2000).

Brewin, Beryl L. (1946) Ascidians in the vicinity of the Portobello Marine Station, Transactions of the Royal Society of New Zealand 76(2): 87-81

Mackenzie, A. B. (2011) Biological synopsis of the European sea squirt (Ascidiella aspersa), Canadian Manuscript Report of Fisheries and Aquatic Sciences 2968: 1-15

Millar, R. H. (1954) The annual growth and reproductive cycle of four ascidians, Journal of the Marine Biological Association of the United Kingdom 31(1): 41-61

Nagabhushanam, A. K.; Krishnamoorthy, P. (1991) Occurrence and biology of the solitary ascidian, Ascidiella aspersa., Journal of the Marine Biological Association of India 34(1-2): 1-9