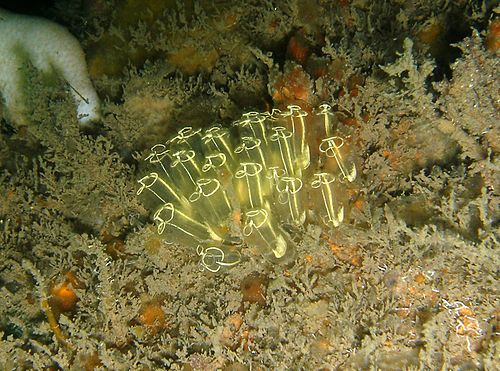 The Light Bulb Tunicate, Clavelina lepadiformis, is a colonial tunicate with transparent zooids joined at the base by short stolons. Fully developed zooids are clear with white, yellow or pink bands around the oral siphon and dorsal lamina, giving them a light-bulb appearance. Clavelina lepadiformis is native to Europe, ranging from southern Norway to the Mediterranean Sea. It has been introduced to the Azores, South Africa, South Korea, and the US East Coast. It was first discovered in US waters in 2009 in Long Island Sound, Connecticut. The introduction of this species is probably a result of ship fouling. No impacts have been reported so far, but it is a recent introduction in North America and the introduced region is small.

Clavelina lepadiformis is a colonial tunicate made up of groups of transparent zooids joined at the base by short stolons (MarLin 2006). Fully developed zooids are 5-6 cm long and are clear with white, yellow or pink bands around the oral siphon and along the dorsal lamina, giving them a light-bulb appearance (Berrill 1950; Reinhardt et al. 2010). Eggs and larvae vary in color and are visible in the atrial cavity. In the Mediterranean the eggs and embryos are most often yellowish white but can be pink or red in other regions (Fish & Fish 1996; Xavier Turon, pers. comm.). Colonies can be large and may consist of a few or tens to hundreds of zooids. In some areas colonies regress in winter and re-grow in spring, although in the Mediterranean this may not be the case (MarLin 2006).

The native range of Clavelina lepadiformis extends from southern Norway and the Shetland Islands to the Atlantic coast of Spain and the Mediterranean Sea (Berrill 1950; de Caralt et al. 2002; MarLin 2006). It has been introduced to the Azores (Cardigos et al. 2006), to the east coast of South Africa (Monniot et al. 2001), and the US East Coast (Rheinhardt et al. 2010). These introductions are probably the result of ship fouling.

In October 2009, Clavelina lepadiformis was discovered in the Thames River, near New London, Connecticut, and in nearby Stonington Harbor. Colonies were found at only these two locations in a survey of 11 sites from Fishers Island Sound, which is part of Long Island Sound (Rheinhardt et al. 2010).

Clavelina lepadiformis was reported in Madeira and the Canary Islands, but its invasion status is unknown, so we consider it cryptogenic here (Wirtz 1998). Its status as an introduced species is more definite in the Azores, where it first appeared in 1971 on the island of Sao Miguel. It later dispersed to all of the Azores (Cardigos et al. 2006). On the Indian Ocean coast of South Africa, C. lepadiformis was discovered at Port Elizabeth and the Knysna Estuary (Monniot et al. 2001; Robinson et al. 2005). Between 2008 and 2011, it was collected on Chejudo Island, South Korea, in the East China Sea (Pyo and Shin 2011).

In the Mediterranean, the status of Clavelina lepadiformis is complex. A native clade is present in rocky areas on the open coast of Catalonia, Spain, but in harbors, a genetically distinct form, with differing life history and population biology is present. These two clades could represent cryptic species, but have not been formally separated. The harbor form is identical to widespread European Atlantic clades and appears to represent a recent introduction by shipping. However, the date of introduction is not known (Tarjuelo et al. 2001; de Caralt et al. 2002; Turon et al. 2003).

Colonial (or compound) tunicates consist of many zooids, bearing most or all of the organs of a solitary tunicate, but modified to varying degrees for colonial life. Zooids of the genera Clavelina are elongated, completely or partially embedded in the tunic, and are connected by basal stolons. Each zooid has an oral and atrial siphon, which open on the colony surface, and a body divided into two regions – a thorax and abdomen. The thorax contains the pharynx and below it, the abdomen contains the stomach, intestine, ovaries, testis, and heart. Water is pumped into the oral siphon, through finely meshed ciliated gills on the pharynx, where phytoplankton and detritus is filtered, and passed on mucus strings to the stomach and intestines. Excess waste is then expelled in the outgoing atrial water (Van Name 1945; Barnes 1983).

Colonial tunicates reproduce both asexually, by budding, and sexually, from fertilized eggs developing into larvae. Buds can form from the body wall of the zooid or from the stolons. Colonies vary in size, and can range from small clusters of zooids to huge spreading masses. The zooids are hermaphroditic, with eggs and sperm being relased to the atrial chamber. Eggs may be self-fertilized or fertilized by sperm from nearby animals, but some species have a partial block to self-fertilization. Eggs are brooded in the atrial cavity, and hatch into a tadpole larva, with a muscular tail and a notochord, eyespots, and three adhesive papillae in a triangle formation. The lecithotrophic (non-feeding, yolk-dependent) larva is expelled on hatching, and swims briefly before settlement. Swimming periods are usually less than a day, and some larvae can settle immediately after release, but the larval period can be longer at lower temperatures. On settlement, the tail is absorbed, the gill basket expands, and the tunicate begins to feed by filtering (Van Name 1945; Barnes 1983).

There are no known impacts of Clavelina lepadiformis in its introduced range.

Mackenzie, A. B. (2011) Biological synopsis of the light-bulb tunicate (Clavelina lepadiformis), Canadian Manuscript Report of Fisheries and Aquatic Sciences 2967: 1-15

Turon, Xavier (1990) Distribution and abundance of ascidians from a locality on the northeast coast of Spain, Marine Ecology 11: 391-408

Wirtz, Peter (1998) Twelve invertebrate and eight fish species new to the marine fauna of Madeira, and a discussion of the zoogeography of the area., Helgolander Meeresuntersuchungen 52: 197-207