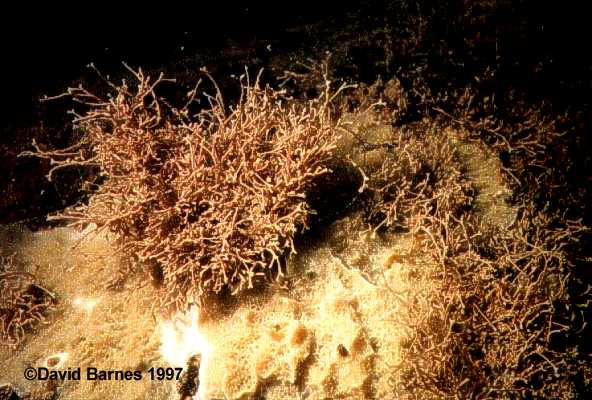 Fredericella indica is a freshwater bryozoan which was first described in India, its presumed native range. It is now widespread in North America, Europe and Asia. In Eastern North America it is known from Nova Scotia and Ontario south to Louisiana. It has also been found in Western North America, but is more scattered and rare in occurrence here. It has been found in lakes and rivers in Montana, Idaho, British Columbia, Washington, and Oregon and is introduced in the Columbia River estuary. It attaches to rocks, wood, aquatic vegetation, sponges, freshwater mussels, and other bryozoans. No economic or ecological impacts have been reported for this species.

Fredericella indica is rare and scattered in western North America. Marsh and Wood (2002) found it at four locations in Washington and Oregon, all in mountain sites. It has also been found in lakes and rivers in Montana, Idaho, and Vancouver Island, British Columbia (Okamura and Wood 2002). It is apparently introduced to the Columbia River estuary (Sytsma et al. 2004). It was first reported there in 1999, and was described as 'widespread in the lower bays of the basin (in brackish as well as freshwater) (Sytsma et al. 2004). One location, Ilwaco Harbor, had salinities of 4-10 PSU (Sytsma et al. 2004; USGS Nonindigenous Aquatic Species Program 2011). Likely vectors include fish-stocking, trailered boats, fishing gear, and ornamental aquatic plants. As with other freshwater bryozoans, its statoblasts are tolerant of desiccation. Fredericella sp. is abundant in low-salinity parts of the San Francisco estuary (Jimenez et al. 2018), but has not been identified to species.

Fredericella indica is known from Nova Scotia, and the Great Lakes Basin from Ontario (Rogick 1935, Ricciardi and Reiswig 1994), south to Louisiana (Everitt 1975).

Fredericella indica is a freshwater bryozoan, which can form either prostrate or erect branches. The prostrate branches have a keel, but the erect branches lack a keel and are antler-shaped. The external cuticle (ectocyst) is brown or grey, and lightly or heavily encrusted. The lophophore, when extended, is circular in outline. Like other freshwater bryozoans, it produces statoblasts, masses of cells, covered with a resistant covering of chitin, which develop on the funiculus, at the base of the zooid. These are asexually produced propagules which can survive desiccation, cold, and other adverse conditions. Statoblasts of F. indica are kidney or bean-shaped, and covered extensively with small hexagonal pits. They lack an annulus and are not buoyant (Description from Ricciardi and Reiswig 1994).

Fredericella indica from North America is morphologically very similar to European specimens of F. sultana, differing only in the extensive pitting of the statoblasts in F. indica, and in chromosome numbers (Wood and Backus 1992).

Fredericella sultana
Reports of this species from North America refer to F. indica (Wood and Backus 1992)

Life History- Fredericella indica is a bush-like, soft-bodied, freshwater bryozoan composed of many individual zooids. The zooids feed by extending the ciliated tentacles of the lophophore as a funnel, creating a current, and driving food particles into their mouths. The food is guided by cilia down the tentacles and through the pharynx. Larger food particles can be moved or captured by flicking or contracting the tentacles. The zooids are hermaphroditic, and produce large eggs, which are released into an embryo sac in the body cavity. This develops into a ciliated cystid sac, which buds off several zooids. The sac is a small ciliated colony which swims for a short period (less than 1-2 days). The cystid sac settles and the ciliated outer wall degenerates. The new colony continues to grow, but the parent zooids die, so that only the tips of the colony contain living zooids. Colonies also produce asexual propagules, called statoblasts, masses of cells enclosed by a chitinous shell. Statoblasts remain dormant and are resistant to desiccation and freezing and they have great potential for dispersal (Barnes 1983). In F. indica, statoblasts are not buoyant (Ricciardi and Reiswig 1994). While colonies of other freshwater bryozoans die off in winter, F. indica is unusual in surviving under ice (Wood 1991).

Ecology- Fredericella indica inhabits lakes and rivers, in oligotrophic to eutrophic conditions, at 4.7-9.4 pH and 4-32 ⁰C (Everitt 1975; Ricciardi and Reiswig 1994). It has been found attached to rocks, wood, aquatic vegetation, sponges, freshwater mussels, and other bryozoans (Wood 1991). It is a freshwater species but has been collected at salinities as high as 10 PSU in Ilwaco Harbor, Columbia River estuary (Sytsma et al. 2004; USGS Nonindigenous Species Program 2011).

There are no reported impacts of Fredericella indica in the Columbia River estuary, the only estuary in which it has been found to be introduced. However, F. indica is one of several freshwater bryozoans that can be a host of the early life-cycle stages of Tetracapsula bryosalmonae, a myxozoan which causes proliferative kidney disease (PKD) in salmonids. It has been found in locations upstream from streams and lakes where outbreaks have occurred (Okamura and Wood 2002).