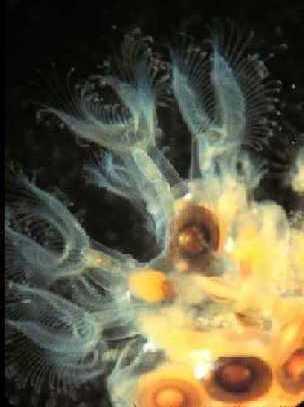 Lophopodella carteri is an erect freshwater bryozoan which forms yellowish, globular and gelatinous colonies. It is native to Southeast Asia and non-native records are known from Africa, Australia, Russia and North America. The first North American record was from Princeton, New Jersey in 1930. Since then it has been reported from Quebec, the Great Lakes, Maryland, Virginia, Kentucky, and Oregon. It inhabits lakes and rivers and has been found attached to rocks, wood, aquatic vegetation, sponges, freshwater mussels, and other bryozoans. Few impacts have been reported for L. carteri, but fish mortalities due to this bryozoan were noted in a Pennsylvania fish hatchery.

The freshwater bryozoan Lophopodella carteri is native to Southeast Asia (Ricciardi and Reiswig 1994; Wood et al. 2006) and non-native records are known from Africa, Australia, Russia and North America (Wood 1991). The first North American record was from Princeton, New Jersey in 1930. Since then it has been reported from Quebec, the Great Lakes, Maryland, Virginia, Kentucky and Oregon.

The first North American record was from the Delaware and Raritan Canal near Princeton, New Jersey, in 1930 (Dahlgren 1934). Dahlgren (1934) concludes that it is a recent introduction, probably from India. He had been collecting extensively in the fresh waters around Princeton since 1890 and had not seen it until 1930 when it was ‘abundant in the canal but not in the lake or other Princeton streams and ponds’ (Dahlgren 1934). Subsequently, Lophopodella carteri was found in two shallow embayments on the southwest shore of Lake Erie, Ohio in 1931 (Rogick 1934). Its occurrence in the indoor greenhouses of a company cultivating water lilies (Masters 1940) suggests the likeliest route of entry. In addition to the greenhouses sampled by Masters (1940) in Ohio, the William Tricker Company also owned growing pools in Saddle River New Jersey, near Princeton.

This bryozoan has spread in a scattered fashion over eastern North America, from Quebec (Ottawa and St. Lawrence Rivers, 1989) (Ricciardi and Lewis 1991; Ricciardi and Reiswig 1994) to Kentucky (Rogick 1957) and Virginia (Tenney and Woolcott 1962). 'In North America, the species is regionally rare but often locally abundant' (Wood 1991). In the Great Lakes-St. Lawrence system, it is known from Lake Superior (Grigorevich et al. 2003), Lake Michigan (USGS Nonindigenous Aquatic Species Program 2011), Lake Erie (Rogick 1934) and the St. Lawrence River near Montreal (Ricciardi and Lewis 1991). The only tidal records of which we are aware are from the tidal fresh Potomac River, near Douglas Point, Maryland (in 1972, Pfitzenmeyer 1976), and from the brackish Hudson River, at Indian Point (only statoblasts found, Williams et al. 1973). However, in 2011-2012, high densities of statoblasts of L. carteri were found in sediments on the south shore of the tidal fresh St. Lawrence River, near a nuclear power plant near Becancour, Quebec (Hamelin et al. 2016).

Lophopodella carteri colonies could be dispersed with aquatic plants, or stocked fishes. Its desiccation-resistant statoblasts could be dispersed by migratory birds (Wood 2002). Statoblasts of L. carteri were common in ballast water sediments of ships sampled in the Great Lakes (Kipp et al. 2010).

Lophopodella carteri has been recorded from the Volga delta, Russia, where its occurrence was attributed to the transport of statoblasts (resting cysts) by migrating birds (Abricosov and Kosova 1963).

Lophopodella carteri is an erect freshwater bryozoan, which forms yellowish, globular and gelatinous colonies, covered by a soft, transparent ectocyst (cuticle), which does not become encrusted. Colonies may be composed of 5-6 lobes, each containing up to 12 zooids. The polypides withdraw into a common coelomic colony. The lophophore is horseshoe-shaped, and has about 60 tentacles. The whole colony is capable of creeping along slowly, or attaching itself to a substratum. Colonies average 4 X 5 mm, but can reach 13 X 6.5 mm. The statoblast is oval and saddle-shaped, with 8-13 spines at both poles. The length of the statoblasts, including spines is 1.13 -1.15 mm X 0.90-.98 mm (Description from Rogick 1934; Ricciardi and Reiswig 1994; Wood et al. 2006).

Life History- Lophopodella carteri is a globular, soft-bodied, freshwater bryozoan, a colony composed of many individual zooids. The zooids feed by extending the ciliated tentacles of the lophophore as a funnel, creating a current, and driving food particles into their mouths. The food is guided along the tentacles and through the pharynx by the cilia. Larger food particles can be moved or captured by flicking or contracting the tentacles (Barnes 1983). The zooids are hermaphroditic, and produce large eggs, which are released into an embryo sac in the body cavity. This develops into a ciliated cystid sac, which buds off several zooids. The sac is a small ciliated colony which swims for a short period (less than 1-2 days). The cystid sac settles and the ciliated outer wall degenerates. The new colony continues to grow, but the parent zooids die, so that only the tips of the colony contain living zooids. Colonies also produce asexual propagules, called statoblasts, masses of cells enclosed by a chitonous shell. Statoblasts remain dormant, are resistant to desiccation and freezing and have great potential for dispersal (Barnes 1983). In L. carteri, statoblasts are not buoyant. Colonies of L. carteri die off in winter (Ricciardi and Reiswig 1994).

Fisheries- Lophopodella carteri is as a possible source of fish mortality in fish hatcheries and aquaculture facilities. Mortalities due to this bryozoan were noted in a Pennsylvania fish hatchery (Rogick 1957; Tenney and Woolcott 1964).

Rogick, Mary D. (1934) Studies on fresh-water Bryozoa. I. The occurrence of Lophopodella carteri (Hyatt) 1866 in North America, Transactions of the American Microscopical Society 53(4): 416-424

Tenney, Wilton R., Woolcott, William S. (1964) A comparison of the responses of some species of fishes to the toxic effect of the Bryozoan, Lophopodella carteri (Hyatt), Virginia Journal of Science 16: 16-20