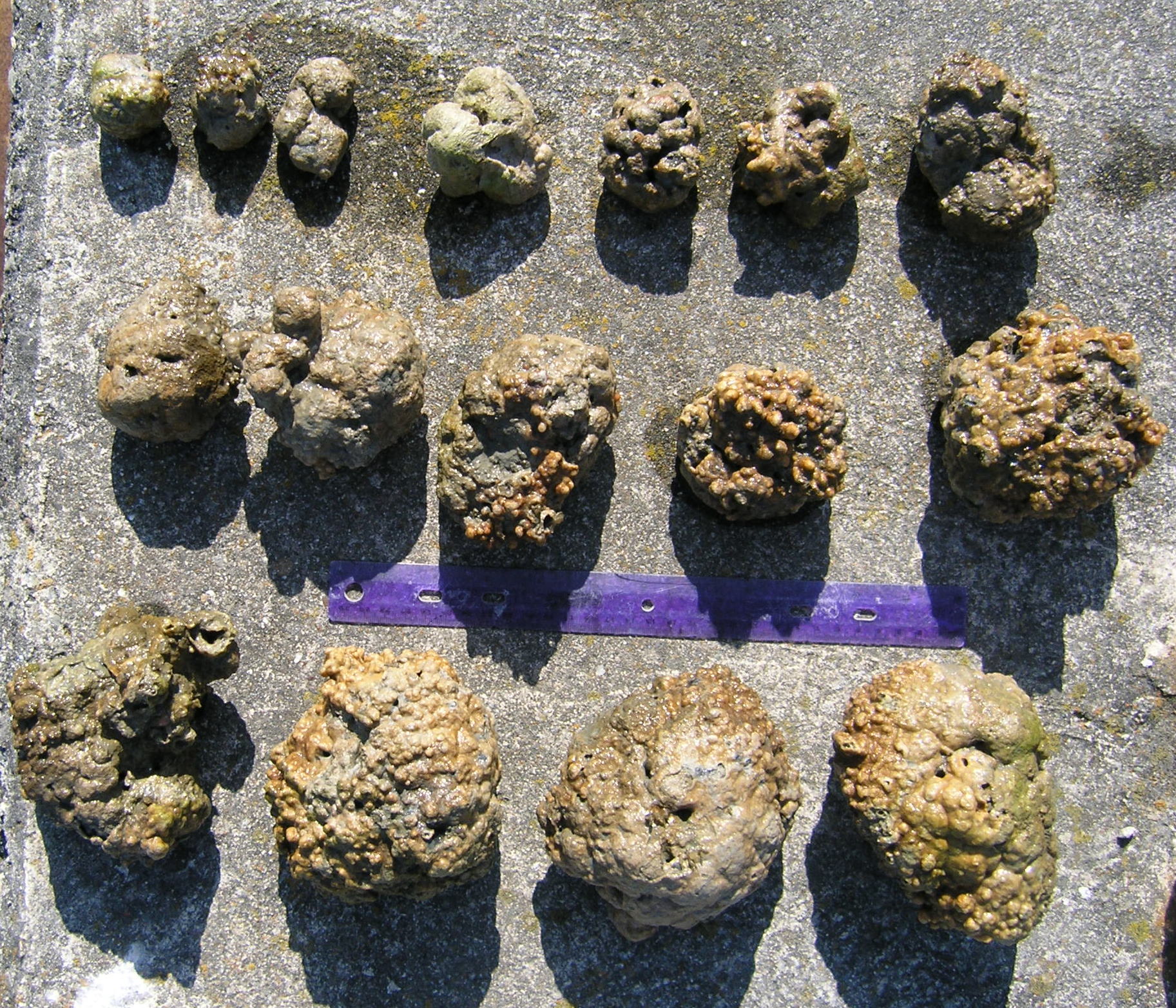 Schizoporella variabilis (Leidy 1855) is a heavily calcified encrusting bryozoan which can grow in two forms: attached double layered colonies or unattached bryoliths (as shown in the picture). It was first described from Rhode Island and New Jersey and ranges from Virginia to the Gulf of Maine. . It has been introduced to San Francisco Bay, and has also been found in Bodega Bay and Mission Bay. It is tolerant of brackish water and has been found on eelgrass, oysters, rocks, pilings, docks and ships' hulls. In San Francisco Bay, it created numerous bryoliths, forming new, complex habitat on mudflats. As a frequent fouling organism, it has likely been introduced through hull fouling on commercial vessels.

Schizoporella variabilis was first described from Naples, Italy and appears to be native to the Mediterranean, but is now widespread throughout the world's warmer waters (Hayward and Ryland 1999; Hayward and McKinney 2002). As an encrusting organism it is readily transported in fouling. In British waters, it occurs sporadically on ships (Hayward and Ryland 1999). Its worldwide range and its occurrences in the Pacific are poorly documented because of confusion with many similar Schizoporella species. Powell (1970) suggested that some southern California occurrences may have represented S. variabilis, but was not specific about locations. It was once considered to be widespread on the East coast of North America, but the form found there has been identified as a distinct species, S. floridana (Hayward and Ryland 1999).

The identity of the widely introduced Pacific forms of Schizoporella has been uncertain (Judith Winston, pers. comm.). Global morphological and molecular surveys will be required to determine the identity of apparently introduced Schizoporella species. Currently, Smithsonian Environmental Research Center consulting taxonomists (Matthew Dick; Judith Winston) have definitely identified S. variabilis from plates in San Francisco Bay, but not from other West coast localities.

The date of first occurrence of Schizoporella variabilis in San Francisco Bay is unknown, although its occurrence there has long been suspected (Powell 1970; Carlton 1979). In 2000, it occurred on SERC fouling plates at Redwood City in the South Bay, and at San Francisco and Tiburon, in the Central Bay (Ruiz et al., unpublished data).

One or more species of Schizoporella have been introduced to the Hawaiian Islands, variously identified as either S. variabilis or S. unicornis. Hawaiian material requires re-examination before names can be applied (Carlton and Eldredge 2009).

In the Pacific, Schizoporella variabilis has been found at Pago Pago Harbor, American Samoa (Coles et al. 2003). In New Zealand, it was reported to occur sporadically, first found in Auckland Harbor in 1960, and occurring on the hull of a yacht in the Bay of Islands in 1988 (Gordon and Mawatari 1992), but recently occurring in surveys of several New Zealand harbors (Inglis et al. 2005b). Its date of first occurrence in Australia is unknown, owing to confusion with S. unicornis, but it is known from Sydney Harbor (Piola and Johnston 2006; Glasby et al. 2007), Port Phillip Bay (Hewitt et al. 2004), and Geraldton and Shark Bay, Western Australia (Wyatt et al. 2005; http://www.civgeo.rmit.edu.au/bryozoa/cheilostomata/schizoporellidae/schierr.html).

Schizoporella variabilis is a heavily calcified encrusting bryozoan, sometimes rising as a double layer with knobs or tubular extensions and growing from rigid or flexible surfaces such as worm tubes and algae. The thickness of a colony is dependent upon its age. Many-layered encrustations of 1 cm thick are common. Its color varies from pink, to orange to brick red. The young zooecia are hexagonal, with older ones being quadrilateral or irregularly polygonal. The frontal wall is opaque and covered with circular pits, each containing a round pore. The orifice is roughly semi-circular, with a central U-shaped sinus on the proximal, roughly straight, edge . It is often not centered and is closer to one side of the zooid. The sinus is surrounded by several tab-like condyles. There are single or paired avicularia on the right or left side of the sinus. The zooecia lack spines and the ovicells are globular, with a radiating pattern or pores and a rough textureIts calcification thickens and the pores deepen with later development. The ancestrula is oval, without pores, and with a large, semicircular orifice, surrounded by four pairs of spines (description from: Leidy 1855; Verrill and Smith 1873; Winston and Hayward 2012).

In California, S. variabilis tends to be rather pale, with dark spotty pigment blotches, whereas S. japonica is bright orange in color. The former can also have adventitious, large, frontal avicularia, though they may be rare. Schizoporella variabilis is often rare on panels, but quite abundant in San Francisco Bay as bryoliths (unattached, living colony masses) (Zabin et al. ,2010) whereas S. japonica is very abundant on panels, but has never been seen to form bryoliths (Linda McCann, personal communication 2009)..

Schizoporella errata
(Waters 1878) Described from Naples, and appears to be native to the Mediterranean, but is now widespread in the world's warmer waters (Hayward and Ryland 1999;

Schizoporella pseudoerrata
(Soule, Soule, and Chaney 1995). 'This very similar species, newly described by Soule et al in 2005, is known from California fouling communities, and may be a redescription of a form of a previously described Schizoporella. It is not likely to be a native species.' (James T. Carlton, personal communication, 2013).

Schizoporella unicornis
(Johnston 1874) A northeast Atlantic species, described from England. Its present range is uncertain, due to the presence of related cryptic species, such as S. japonica (Tompsett et al. 2009).

Life History- Schizoporella variabilis is an encrusting, calcified bryozoan composed of many individual zooids. Zooids can reproduce asexually through diviision. Zooids are herrmophroditic, and also reproduce sexually, to produce larvae which are brooded and then released. Larvae of S. errata are lecithotrophic, and have a short planktonic period (less than 1 day, Hayward and Ryland 1999). The zooids feed by extending the ciliated tentacles of the lophophore as a funnel, creating a current, and driving food particles into their mouths. The food is guided along the tentacles and through the pharynx by the cilia. Larger food particles can be moved or captured by flicking or contracting the tentacles (Barnes 1983). Larvae settle on a substrate and metamorphose into the first zooid of a colony, an ancestrula (Barnes 1983).

Leidy, Joseph (1855) Contributions towards a knowledge of the marine invertebrate fauna, of the coasts of Rhode Island and New Jersey, Journal of the Academy of Natural Sciences of Philadelphia <missing volume>: 135-151

Powell, N.A. (1970) Schizoporella unicornis - an alien bryozoan introduced into the Strait of Georgia., Journal of the Fisheries Research Board of Canada 27: 1847-1853