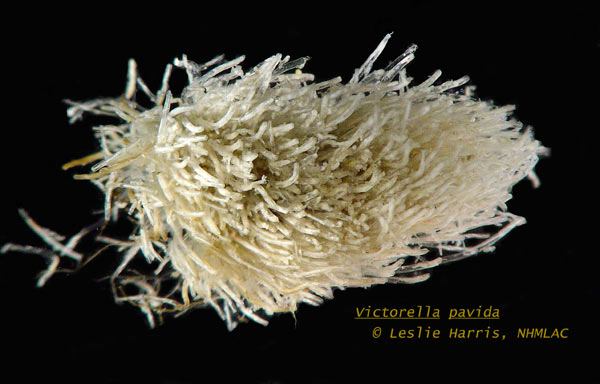 Victorella pavida is an erect, un-calcified bryozoan, found in fresh and brackish waters. It was first described from London, UK in 1870 and has subsequently been reported from a number of locations, including various Northern European ports, the Mediterranean, Black and Caspian Seas, Israel, India, Thailand, Japan, Uruguay, Brazil, California, and the Atlantic and Gulf Coasts of North America. The taxonomy of this species is difficult to discern in some contexts and the history of its spread around the globe is unknown. We consider it as being introduced to Northern Europe and the Pacific Coast of North America. It has been found attached to vegetation, woody debris, shells, jetties, pilings and boats. Victorella pavida fouls power plant intake pipes and boats' hulls and can compete for space with other sessile invertebrate species, however, its variable shape and size can provide habitat for small motile invertebrates.

Carlton (1979), while acknowledging taxonomic difficulties, has suggested that V. pavida is a species of Indo-Pacific origin which has been transported worldwide by ships, first to Britain and elsewhere in Europe, then to the east coast of North and South America, and later to the West Coast (Lake Merritt, Oakland, CA; 1967) by way of Japan. However, Mordukhai-Boltovskoi (1964) regarded this bryozoan as native to the Ponto-Caspian region and introduced worldwide, as was the hydroid Cordylophora caspia. It appears that careful comparisons of morphology of live organisms and genetic studies will be needed to determine the origins of this species or species complex. Victorella pavida is probably introduced in England and northern Europe. Marine biology was such a widespread interest there in the late 1800's, it is likely that native populations would have been recognized much earlier if they existed. We treat this bryozoan as introduced in Northern Europe and along the Pacific coast of North America where it has a scattered distribution, and is largely confined to ports. We consider it cryptogenic in the Mediterranean, Ponto-Caspian region, Western Atlantic, and Indo-Pacific, all possible regions of origin and/or the occurrence of potentially misidentified species.

On the Pacific Coast of North America, Victorella pavida is a definite introduction. It was found in Lake Merritt, Oakland, California, in 1967 (Carlton 1979). It had not been collected in other San Francisco Bay locations until it was found in the Turning Basin of the Petaluma River in 2004 (Cohen et al. 2005). Victorella pavida has also been found in the Tijuana River, San Diego, and in Elkhorn Slough (de Rivera et al. 2005).

We consider Victorella pavida to be cryptogenic on the East and Gulf coasts, because of uncertainty in its identification. Some of the V. pavida identified from the Atlantic coast of the US, including specimens illustrated by Osburn (1944) from Chesapeake Bay, may be Tanganella appendiculata, presumably a native North American species, first described in 1982 from Martha's Vineyard, Massachusetts. Victorella pavida and Tanganella spp. can only be distinguished in living material, and consequently many 'Victorella' identifications are uncertain (Jebram and Everitt 1982). We will refer to records which could be V. pavida, T. appendiculata, or other related species as 'V. pavida (s.l.)' (for 'sensu lato', meaning in the broad sense). Winston (personal communication) examined live 'V. pavida (s.l.)' specimens from fouling plates from Baltimore Harbor, but has not yet determined the identity of the organisms.

On the East Coast, Victorella pavida was first reported from the lower Chesapeake Bay, off Cape Charles City, Virginia, in a biological survey of the Bay in 1915-1922 (Cowles 1930; Osburn 1932). However, this bryozoan may have been present earlier. The first collections of Victorella pavida were in the mid-to-lower Bay, at locations between James Island, MD and Cape Charles City, VA (Cowles 1930; Osburn 1932). Osburn (1944) later reported that it ranged over 3-27 ppt, with an optimum around 10-14 ppt. He also noted that 'Where it is abundant, it is a nuisance in fouling the bottoms of boats... Oysters and barnacles may be covered to the edges of their shells' (Osburn 1944). Bibbins (1893), studying Cordylophora in Furnace Creek, Baltimore Harbor, noted 'dense and beautiful growths of bryozoans', most likely Victorella pavida (s. l.). since this is the only bryozoan occurring there now (Ruiz et al., unpublished). Victorella pavida (s. l.) has also been reported from North Carolina (in 1973, Dean and Bellis 1975), South Carolina (Calder and Maturo 1978); Florida (in 1975, Winston 1982), Mississippi (in 1975, Poirrier and Mulino 1977), Louisiana (in 1971, Everett 1975, Poirrier and Mulino 1977), and Texas (Corpus Christi, Galveston Bay, in 2003, Ruiz et al., unpublished data). Chesapeake Bay appears to be its northern limit on the Atlantic Coast.

Victorella pavida (s.l) is widely reported in warmer parts of the world, where we regard it as cryptogenic. It is recorded from estuaries in Mondevideo and Rio de la Plata, Uruguay and Sao Paulo and Rio de Janeiro, Brazil (Marcus 1955). It is also known from coastal lagoons on the Atlantic coast of Morocco, and throughout the Mediterranean (Carrada and Sacchi 1969), the Black and Caspian Seas (Mordukhai-Boltovskoi 1964; Carrada and Sacchi 1969), the east and west coasts of India (Menon and Nair 1967; Rao and Ganapati 1975), fresh and brackish waters of Thailand (Wood et al. 2006), and Matsushima Bay, Japan (Toriumi 1944, cited by Winston 1977). Some of these records may consist of closely related species and genera.

Victorella pavida is an erect, un-calcified bryozoan, found in fresh and brackish waters. Its colonies form diffuse branching chains, or dense clumps of tubular zooids, which are closely or loosely attached to a substratum. Colonies can form a dense mat 3-6 mm high as creeping colonies, but can grow into branching forms 15 mm high, and can spread over a radius of 100-150 mm. The zooids are variable in shape and size. On bare surfaces, it forms creeping colonies of zooids 300-430 µm long and about 150-160 µm thick. Buds form from the basal portion of the zooids. About 180-220 mm of the length, in the distal portion, is the peristomial tube- when the polypide retracts the tube contains only the setae, which form a collar around the mouth and tentacles. As the colony becomes more crowded, the zooids become erect and longer, reaching 1000-1200 µm, joined by short proximal tubes. In erect zooids, budding can occur from the midpoint of the zooid. The new branching zooid can have a long proximal tube, up to 1500 µm, leading to a wider portion, about 450-500 µm, where the polypide is housed. The polypide has a collar of setae and eight tentacles around the mouth. Two of the tentacles are bent sharply away from the others. The pharynx and esophagus leads to the expanded cardia region of the stomach- this species lacks a gizzard. Sexually reproductive zooids develop an intratentacular organ for releasing eggs. The embryos develop in an invagination of the dorsal wall of the vestibule (description from: Osburn 1944; Carrada and Sacchi 1964; Ryland 1965; Winston 1982; Hayward 1985; Wood et al. 2006; Winston and Hayward 2012). Under stressful conditions, colonies form modified zooids, called hibernacula, which are brown, dome-shaped structures, 160-201 µm in diameter, which serve as propagules for surviving cold, hypoxia, or other stresses (Carter et al. 2010).

Taxonomy - There is considerable uncertainty in the taxonomy and identification of Victorellidae and related bryozoans. Many important morphological features cannot be seen in preserved material and the colonies can change form as they grow (Jebram and Everitt 1982). Victorella pavida has been perceived either as a naturally cosmopolitan species (Hyman 1959), or as one widely introduced worldwide (Carlton 1979), but some populations originally identified as V. pavida may be other species of Victorella or other genera (Tanganella, Nolella, Bulbella, etc.) (Jebram and Everitt 1982).

In the genus Victorella, the cardial sphincter is located at the midpoint of the cardial region (rather than at the beginning of the digestive caecum, as in Tanganella) (Jebram and Everitt 1982). However, gut morphology is difficult to observe, and its taxonomic value is untested (Wood et al. 2006). In the genus Bulbella, only erect zooids occur, and the larvae are brooded externally. Based on other criteria, at least six species of Victorella have been recognized, but their validity is uncertain (Wood et al. 2006). Osburn's (1932) identification of Victorella pavida from Chesapeake Bay was somewhat provisional; comments from British Museum taxonomists Harmer and Kirkpatrick were: 'Your example differs a good deal from the typical material; but on the other hand resembles closely the figures of Kraepelin. We are both inclined to think that you would not be far wrong if you named your specimen 'Victorella pavida.' So the determination stands and must remain until better preserved material can be properly studied'. Osburn (1944), Poirrer and Mulino (1977b) and other authors had noticed a correlation between decreasing salinity and decreased branching of 'Victorella pavida' colonies. Jebram and Everitt (1982) suggest that this may represent differences among cryptic species. Wood et al. (2006) observed a high degree of variability in cultured and wild colonies in freshwater in Thailand, depending on crowding, and possibly seasonal and environmental influences.

The possible distinctions among multiple species potentially confused with Victorella pavida, are likely to be missed in earlier work and in most routine fouling surveys. Given the uncertainty over species identification, records from the Chesapeake and other localities, as well as life history and community data, should be regarded as 'V. pavida 'sensu lato' (in the broad sense, ignoring possible cryptic speciation- 's. l.' for short) unless we have noted them as more closely identified. Dr. Judy Winston has identified 'Victorella pavida s. l.', resembling Osborn's material from Chesapeake Bay, including material from the Smithsonian Environmental Research Center 'Invasions Group' settling plates (Winston personal communication).

Bowerbankia gracilis
Bowebankia spp. bud from the stolons, and have a gizzard. All 8 tentacles are uniformly straight or curved.

Bulbella abscondita
This species was described from Martha's Vineyard, Massachusetts (Jebram and Everitt 1982).

Tanganella appendiculata
This species was described from Martha's Vineyard, Massachusetts (Jebram and Everitt 1982)

Tanganella muelleri
This species has been reported from European waters (Baltic-Mediterranean). There is one report from Cape Cod, Massachusetts.

Victorella pseudoarachnida
This species was described from Salton Sea, California.

Life History- Victorella pavida is a soft-bodied bryozoan, which forms creeping or bush-like colonies composed of many individual zooids. The zooids feed by extending the ciliated tentacles of the lophophore as a funnel, creating a current, and driving food particles into their mouths. The food is guided along the tentacles and through the pharynx by the cilia. Larger food particles can be moved or captured by flicking or contracting the tentacles. The zooids are hermaphroditic, and produce large yolky eggs, which hatch into lecithotrophic larvae that are planktonic for short periods (less than 1-2 days). Larvae settle on a substrate and metamorphose into the first zooid of a colony, an ancestrula (Hyman 1959; Barnes 1983). Under stressful conditions, including falling temperatures, and hypoxia, zooids form structures called hibernacula, which survive when the colony dies back. Hibernacula remain attached to the substratum, and are not viable for more than a year (unlike the statoblasts of most freshwater bryozoans) (Carter et al. 2010).

Ecology- Victorella pavida has been found attached to vegetation, woody debris, jetties, shells, pilings, and boats (Osburn 1944; Maturo 1957). This bryozoan has been reported from freshwater in India, Thailand, and Louisiana, but is best known from brackish waters (Osburn 1944; Carrada and Sacchi 1964; Everitt 1975; Poirrier, and Mulino 1977; Massard et al. 1992; Wood et al. 2006). Populations in different regions seem to vary greatly in salinity tolerance, which could reflect either intraspecific genetic differences or cryptic speciation. Colonies in England grew poorly at salinities below 9 PSU (Carter et al. 2010), while in Thailand this bryozoan is widespread in fresh water (Wood et al. 2006). In India, colonies that settled during the monsoon period at 0.3-5.2 PSU, had 100% 24-hour survival, while those that settled in the post-monsoon period at 14.6-22.4 PSU did not survive in freshwater (Menon and Nair 1967).

Industry - Victorella pavida (s. l.) is an important fouling organism on power plants and other industrial equipment in estuarine waters of the Patuxent River, Chesapeake Bay (Nauman and Cory 1969) and the Sea of Azov (Partaly 1979).

Boating - Victorella pavida (s. l.) is 'a nuisance fouling species on the bottom of boats' in Chesapeake Bay (Osburn 1944; Lippson and Lippson 1984).

Bibbins, Arthur (1892) On the distribution of Cordylophora in the Chesapeake estuaries, and the character of its habitat, Transactions of the Maryland Academy of Sciences 1: 213-228