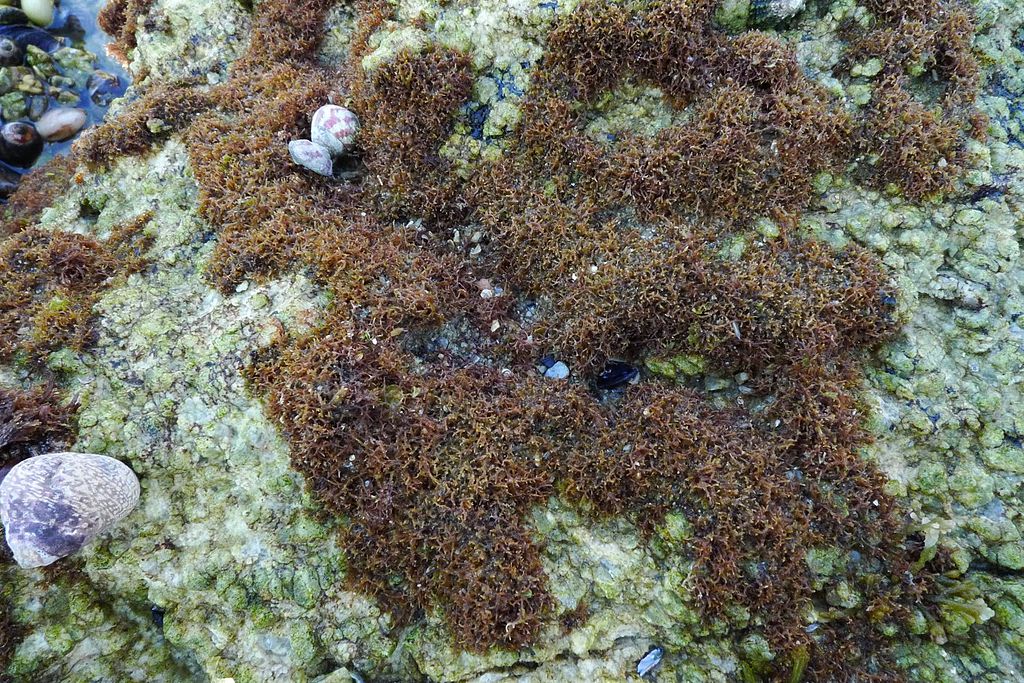 Caulacanthus okamurae is a small red alga, native to Asia and the Indo-Pacific. Introduced populations are known from Europe and the West Coast of North America. It is a turf-forming algae that grows in dense aggregations in the mid-to-upper intertidal zone of exposed rocky coasts and more sheltered areas. In California, introduced populations were shown to decrease the number of gastropods and barnacles, but in turn, increased the number of algae, copepods and ostracods.

Caulacanthus ustulatus (Kutzing 1843) was described from Cadiz, Spain, but was believed to have a cosmopolitan range in the Eastern Atlantic (France-South Africa) and the Indo-West Pacific (South Africa-Japan, and east to Australia, New Zealand, and Hawaii). A molecular analysis indicates that this 'species' contained two major lineages, an Indo-West Pacific lineage and an Atlantic lineage (Zuccarello et al. 2002). The name C. okamurae Yamada 1933 was used for populations from the Northwest Pacific by many Asian workers, but there was doubt about the validity of the name, and the distinctiveness of the species. Observations of the reproductive structures of C. okamurae support its status as a separate species (Choi and Nam 2001; Choi et al. 2001; Verlaque et al. 2015; Guiry and Guiry 2017). Caulacanthus okamurae is known from Japan, China, Korea, Taiwan, and Yonaguni Island, a Japanese island near Taiwan (Choi et al. 2001; Zuccarello et al. 2002; Guiry and Guiry 2017).

Caulacanthus okamurae is an invader in the Eastern Pacific, being found in the Gulf of California in 1944; Pacific Baja California in 1961; British Columbia in 1974; San Pedro, California (CA) in 1999; and Prince William Sound, Alaska sometime from 1989-1996 (Gabrielson and Scagel 1999; Lindstrom et al. 1999; Rueness and Rueness 2000; Whiteside and Murray 2004; Miller et al. 2011). In southern California, Caulacanthus has been observed at numerous sites during the last decade (S. Murray, personal communication), but was not recorded 30 years ago during extensive intertidal surveys sponsored by the government (Murray & Littler, 1981), nor 40 years ago when E.Y. Dawson conducted extensive surveys (Dawson, 1959). This alga was found at Point La Jolla and Dana Point, CA in 2004 (Maloney et al. 2006); Corona del Mar and Point Fermin, CA in 2010 (Smith et al. 2014); and Elkhorn Slough, CA (deRivera et al. 2005; Blanchette et al. 2008). It is also known from locations in central California, including: Santa Cruz, San Francisco Bay (Miller, 2004), and Tomales Bay (specimens from the University of California); and it appears to be spreading northward (Miller et al. 2011).

In the Strait of Georgia, it is known from the Redondo Islands, Pendrell Sound, British Columbia (first reported in 1974; Gabrielson and Scagel 1989) to the San Juan Islands, Washington (first reported in 1995; Zucarello et al. 2002). In surveys run from 1989 to 1996 in Prince William Sound, Alaska, C. okamurae (as C. ustulatus) was found at one location – Hogg Bay (Lindstrom et al. 1999). Vectors on the West Coast probably include hull-fouling, ballast water, and oyster-culture.

Caulacanthus okamurae was reported in 2004 in Brittany, France. Populations of C. ustulatus from Brittany were grouped with the Pacific lineage in the plastid and mitochondrial DNA analysis (Rueness and Rueness 2000; Zuccarello et al. 2002). Subsequently, populations of C. okanmurae were found in Belgium in 2011 (Kerckhof et al., in ICES Advisory Committee on the Marine Environment 2012), the Netherlands in 2005 (Stegenga and Karremans 2015), and the south coast of England in 2000-2005 (Brodie et al. 2016). In the Mediterranean, C. okamurae was found in Marseille in 2004 and later at Toulon, with its identity confirmed by molecular methods (Mineur and Maggs 2005; Verlaque et al. 2015).

Caulacanthus okamurae reaches 20-30 mm in height, forming dense, low turf in the intertidal zone. The branching is irregular to sub-dichotomous, with the smallest branches curved or spine-like. The plants are attached by multicellular holdfasts to the substrate. Cystocarps (fruiting structures in haploid female plants, 300-500 µm in diameter) occur on the tips of the finest branchlets. The cystocarps of C. okamurae lack the spines which occur in C. ustulatus. Diploid tetrasporophyte plants have tetrasporangia, which occur as swellings in the spine-like branchlets (Choi and Nam 2001; Verlaque et al. 2015). Identification of C. okamurae, and distinction from C. ustulatus, requires microscopic and/or molecular examination.

Most populations of Caulacanthus spp. have been traditionally identified as C. ustulatus (Kutzing 1843) described from Spain, and widespread on Eastern Atlantic shorelines. A distinct form from Japan (C. okamurae Yamada 1933) was found elsewhere in the Northwest Pacific (Choi and Nam 2001; Choi et al. 2001). The status of C. okamurae has been disputed, partly on nomenclatural grounds, but a genetic analysis found that Northwest Pacific populations were genetically distinct from those in the Atlantic (Zuccarello et al. 2002). Reproductive structures, needed for comparison of the populations, are rare in Asian populations, possibly by stress due to seasonal typhoons. However, cultured specimens show morphologically distinct structures (Choi and Nam 2001; Choi et al. 2001). Extenisive mitdochondrial DNA analysis found that Caulacanthus sp. from Moss Landinfg were conspecific with specimens from Korea, France, and Spain (Hartnell College Genomics Group et al. 2020),

Caulacanthus okamurae has a two-phased life cycle, with haploid gametophytes, producing carpospores, and diploid tetrosporophytes, producing haploid tetrospores. However, in Korea, where it is native, the reproductive stages are rarely seen, and most of the plants reproduce vegetatively. In culture, temperatures above 19°C were required for sexual reproduction, but in the field, in Busan, South Korea, these temperatures were reached only in September, a season of extensive typhoons, which severely damaged the plants (Choi and Nam 2001; Choi et al. 2001).

Stegenga, Herre; Karremans, Mart (2015) [Review of the red algal exotics in the marine waters of the Southwest Netherlands], Gorteria 27: 141-157