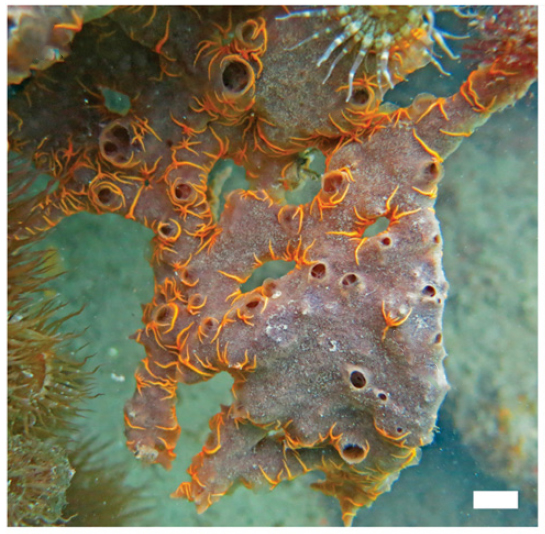 The brittle star Ophiothela mirabilis is epizoic, meaning it living nonparasitically on the exterior of a living animal. It occurs in and on colonies of sponges, corals, bryozoans, and tunicates. Its known mode of reproduction is by fission, dividing into two animals, which means that many animals have varying number or length of arms. The usual number is six, allowing even division, but numbers of arms can change due to predation and regeneration. It may be possible for it to reproduce sexually and produce a planktonic larva as in other ophiuroids, but this has not been reported. It is introduced in Florida and several locations in Central and South America.

The brittle star Ophiothela mirabilis was described from the Pearl Islands, Panama (Verrill 1867), and is known from Baja California, Mexico to Panama and the Galapagos Islands (Alvarado et al. 2010; Galván-Villa et al. 2017; U.S. National Museum of Natural History 2019). It is one of a group of epizoic brittle stars that inhabit sessile organisms, including sponges, corals, gorgonians, bryozoans, and tunicates (Clark 1976; Mantelatto et al. 2016). Very similar, possibly indistinguishable, species of Ophiothela exist in Australia, and elsewhere in the Indo-Pacific, so it is possible that this species has a much larger native range (Clark 1976; Hendler et al. 2012). In 2000, this brittle star was reported from Ilha do Pai, Rio de Janeiro State, Brazil, the first record of this genus in the Atlantic Ocean. Its published range now extends from Santa Catarina State, Brazil (-26.3838S) to St. Vincent in the Caribbean (13.1783 N, Mantelatto et al. 2016; Lawley et al. 2018). The first records of this brittle star in US Atlantic waters are from October 2018, when it was reported in Dania Beach, FL and later off nearby Palm Beach (26.67 N), (Daniel Wesley, personal communication, USGS Nonindigenous Aquatic Species Program 2019; Glynn et al. 2019). This brittle star could be easily transported in the fouling communities of ships. It can reproduce by fission and can rapidly reach high densities on bryozoans, and sponges. Most species in the family Ophiuroidea can reproduce sexually, and have planktonic larvae, but sexual reproduction has not been determined for O. mirabilis (Hendler et al. 2012).

Ophiothela mirabilis has been reported from Dania Beach, Florida in October 2018 (Glynn et al. 201), and from a reef at 18 m depth off Palm Beach, Florida (1/13/19, Daniel Wesley, personal communication, USGS Nonindigenous Aquatic Species Program 2019). In later sampling it was found from Hillsboro Beach to Fisher Island, Miami (Glynn et al. 2020. The brittle star has been found on eight species of octocorals in Florida but rarely on other hosts, including algae, sponges, and hydroids (mGlynn et al. 2020). This brittle star is small (disk diameter 1-6 mm) but it is bright yellow-orange and has become very numerous due to asexual reproduction (Hendler.et al. 2012; Glynn et al. 2019), so could be noticed by divers. Given its wide invaded range in the Atlantic, it can be expected to extend its range on the Atlantic Coast of Florida and in the Gulf.

The brittle star Ophiothela mirabilis is relatively small with a disk diameter of 1-6 mm, and arms of 5-15 mm. There are usually six arms, but since the species reproduces by fission, lost arms can regenerate, thus the numbers and lengths of arms can vary. The dorsal side of the disk is twelve-lobed, and mostly covered by twelve large oval radial shields. The disk and shields are covered by skin, which is studded with rounded granules (Verrill 1867; Hendler.et al. 2012; Hendler and Brugneaux 2013; Lawley et al. 2018). On the ventral (oral) side of the disk, the six jaws are studded with a cluster of ten rounded dental papillae. Oral papillae are absent. The lateral arm plates have five or six thorny arm spines with hooks at the tip, the middle spine is usually the longest. The ventral arm plates are about as long as they are broad and have rounded edges. Brittle stars from the Eastern Pacific vary in color. Three color morphs were found in the Atlantic: bright yellow-orange, beige, and mottled orange, and beige, with proportions varying by location. Most of the animals at Dania Beach were beige, while all of the animals at Fisher Island, Miami, were orange. The orange and beige color morphs represent two genetic clades. The orange ones are in Clade A and are from Florida, Guyana, Brazil and O. danae in Australia, which is considered a synonym by the WoRMS database, Appeltans et al. 2021). The beige color morph is from Florida, Peru, and Pacific Mexico. The occurrence of at least two morphs and clades suggest at least two separate introductions (Glynn et al. 2020). Ophiothela mirabilis has an epizoic lifestyle, occurring on sponges, corals, gorgonians, bryozoans, and tunicates (Mantellato et al. 2016). In Florida, they were found primarily in octocorals. An increase, in soft octocorals is associated with the decline of hard scleractinian corals (Glynn et al. 2020). Atlantic identifications of O. mirabilis are somewhat tentative, and sometimes assigned 'cf'.mirabilis The genus had been considered confined to the Indo-Pacific, and the Eastern Pacific O. mriabilis is not easily distinguishable from the Australian O. hadra, and could possibly be conspecific (Clark 1976).

Ophiactis savignyi
Ophiactis savignyi is somewhat larger than O. mirabilis, with a disk diameter of 2-5 mm and six arms 13-20 mm in length. There are two genetic lineages, Lineage A, tropical-cosmopolitan and cryptogenic in the Atlantic, and Lineage B, introduced from the Indo-Pacific. Colors are variable, and the arms are marked with dark bands (Roy and Sponer 2002; Hendler et al. 2013)..

Ophiomyxa flaccida
Ophiomyxa flaccida (Slimy Brittle Star) can be bright orange, but its color varies to off-white, green, or gray. It is much larger with a disk up to 20 mm across. It is native from Florida to Venezuela (Kaplan 1988).

The brittle star Ophiothela mirabilis is epizoic, occurring in and on colonies of sponges, corals, bryozoans, and tunicates. Its known mode of reproduction is by fission, dividing into two animals, which means that many animals have varying number or length of arms. The usual number is six, allowing even division, but numbers of arms can change due to predation and regeneration (Clark 1976; Hendler et al. 2012). It is possible that O. mirabilis can also reproduce sexually and produce a planktonic larva as in other ophiuroids (e.g., the invasive Ophiactis savignyi, Hendler et al. 2012).

Ophiothela mirabilis is known from tropical and subtropical habitats from Mexico to the Galapagos, and southern Brazil to southern Florida (Galván-Villa et al. 2017; Hendler et al. 2012; Daniel Wesley, personal communication, USGS Nonindigenous Aquatic Species Program 2019). It was absent in low-salinity surface waters at Les Battures, French Guiana, but present in deeper, more saline layers (Hendler et al. 2013). It has been reported from rocky substrates and a wide variety of sessile animals, including sponges, gorgonians, soft corals, and bryozoans (Hendler et al. 2012; Galván-Villa et al. 2017; Thé de Araújo et al. 2018; Fortunato et al. 2021). In Ilha Grande Bay, Brazil, this brittle star was found on 29 species of animals, including sponges, five species of tunicates, and even the tail of a seahorse (Hippocampus reidi) (Mantelatto et al. 2016). Epizoic brittle stars feed on settled detritus, filamentous algae, and mucus, and/or suspension-feed on plankton. Apparently, these ophiuroids do not feed on their hosts (Clark 1976; Glynn et al. 2020). In its native range it often has camouflage colors, but the bright yellow orange morph invading in the Atlantic could indicate a noxious taste or toxin (Mantelatto et al. 2016).

Ophiothela mirabilis has been seen in high densities and conspicuous yellow-orange masses on gray or purple gorgonians and other fouling organisms. These dense aggregations could have negative impacts on the hosts by interfering with feeding (Hendler et al. (2012; Mantelatto et al. 2016). Experimental studies of isolated octocoral branches found that high densities of O. mirabilis can reduce the number of extended polyps, possibly interfering with feeding of the corals, but did not damage polyps or prevent growth. Brittle stars can benefit octocorals by removing detritus, providing some benefits (Glynn et al. 2021).