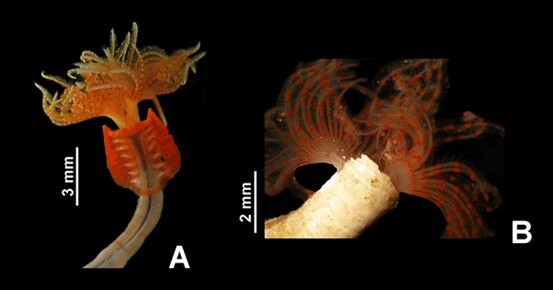 Protula balboensis is a serpulid tubeworm. It was first described from the Pacific Coast of Panama and its native range extends from Mexico to Colombia. Introduced populations are known from Florida, Cuba, Panama and Brazil and shipping is the most likely vector for its transport and spread. It is generally found in intertidal and shallow marine waters on rocky shores, shingle beaches, marinas, and dock pilings. No ecological or economic impacts have been reported for native or introduced populations of this species.

Protula balboensis was first described from Isla Taboga, on the Pacific Coast of Panama, outside the Panama Canal by C.C.A. Monro in 1933. It occurs from the Gulf of California to Colombia on the Pacific Coast, where it is considered 'presumably' native (Bastida-Zavala et al. 2017). In the Atlantic, it occurs from Florida to Brazil and these occurrences are considered probable introductions by shipping (Bastida-Zavala et al. 2017).

The earliest available record for Protula balboensis on the East Coast is for Hutchinson Island, near Fort Pierce, Florida, in the Indian River Lagoon in 1971 (USNM 54736, U.S. National Museum of Natural History 2017). In Smithsonian surveys of fouling communities, P. balboensis was found on fouling plates in the St. Johns estuary in 2001, Jacksonville and Biscayne Bay in 2004, and in Corpus Christi Bay, Texas in 2002. Protula balboensis was rare in most of these samples (1-13 specimens), but appears to be established in the Atlantic and Gulf based on its wide distribution (Bastida-Zavala et al. 2017). Likely vectors for introduction include hull-fouling and ballast water.

Protula balboensis was first collected in the Atlantic in Recife, Brazil in 1962-1963 (Zibrowius 1970). It was later found on the northeast coast of Cuba in Jururú Bay in 1988, and then identified as P. diomedeae (Bastida-Zavala and Salazar-Vallejo 2000b), and on the Caribbean coast of Panama in 2008 (Bastida-Zavala 2008). These scattered records are suggestive of low abundance.

Protula balboensis secretes a calcareous tube, as do other serpulid polychaetes. Serpulids have a feathery crown of modified prostomial palps, called radioles (the prostomium is the first segment, projecting above the mouth). The radioles can be folded and withdrawn into the tube. The peristomium (segment behind the mouth) is folded back to form a collar, which bears uniramous parapodia, with a distinctive set of collar chaetae, with spines or serrations. The collar is the first of seven thoracic chaeta-bearing segments (setigers). The subsequent segments have biramous parapodia. The dorsal branch of the parapodium is called the notopodium; the ventral is called the neuropodium. Chaetae in the two branches and along the body can vary greatly in their morphology, which can be critical in the taxonomy of serpulids. This description is based on: ten Hove and Weerdenburg 1978; Barnes 1983; Blake and Ruff, in Carlton 2007).

The tube of P. balboensis is white and thick-walled, with shallow transverse ridges, but lacking longitudinal ridges, peristomes, or alveoli. Tubes can reach a length of 44 mm with a width of 3 mm, and up to 40 radioles in each lobe of the branchial crown (Monro 1933, cited by Zibrowius 1970). Smaller specimens (tubes 8-7 mm in length) have 9-24 radioles per lobe (Zibrowius 1969; Bastida-Zavala et al. 2017). The radioles have a rounded processes at the end of the inter-radiolar membrane. Serpulids of the genus Protula lack an operculum and an opercular peduncle. The thoracic membrane is well-developed and extends to the last thoracic chaetiger, and is well developed. The collar and thorax bear hooded limbate (with a flattened, wing like edge) chaetae and the abdomen has geniculate (bent, knee-like) chaetae and uncini (stout, deeply embedded beak like chaetae) with numerous rasp-like teeth. Living animals are a pale orange-pink, with bright red spots on the radioles and a bright red thoracic membrane. They also have a yellow dorsal caudal gland (Zibrowius 1970; Bastida-Zavala et al. 2017).

The serpulid tubeworm Protula balboensis, like most serpulids, feeds by extending its feathery gills and trapping plankton in the water column, which are transported by cilia to the mouth. Specific details of reproduction in P. balboensis are unknown, but most serpulids have separate sexes, and planktotropic larvae, with varying planktonic periods (Barnes 1983). Protula balboensis appears to be limited to subtropical and tropical climates. Most records are from intertidal and shallow waters, but P. balboensis has been collected at depths down to 113 m. It has been found on shingle beaches, rocky shores, marinas, pilings, and fouling settlement plates (Bastida-Zavala et al. 2017).

No impacts have been reported for native or introduced populations of Protula balboensis.