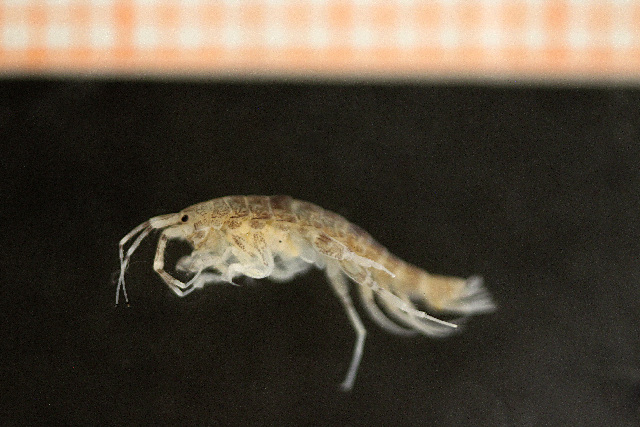 Grandidierella japonica is an estuarine gammarid amphipod which builds U-shaped tubes on muddy substrates. It is native to the Northwest Pacific from Japan, China and Russia. Introduced populations are known from the West coast of North America, Australia, England and France. It often occurs in brackish estuaries, in fine mud, and sometimes in oyster beds and fouling. It is a widespread and abundant invader in California, but its impacts are not well-studied.

Possible vectors to the West Coast of North America, include ballast water, fouling, and imports of Pacific oysters from Japan. Fouling of fishing and recreational boats is a likely vector for coastwise transport to small harbors. A genetic study found two major clades, with Clade A occurring in the minority of specimens in San Francisco Bay and predominant in estuaries to the north, while Clade B predominates in San Francisco and San Diego Bays. The pattern indicates two invasions from separate sources, and a hub-and-spoke pattern of spread from larger ports to smaller estuaries (Pilgrim et al. 2013).

In 1981, Grandidierella japonica was found to be established in the Hawkesbury River estuary, in New South Wales, Australia (Lowry et al. 2015). It has also invaded parts of Europe. In 1999, it was found in Southampton Water, England (Smith et al. 1999) and later in the Orwell estuary (Ashelby 2006), both on the English Channel. In 2010, it was found in Marennes-Oleron Bay, France (Jourde et al. 2013).

Grandidierella japonica has a somewhat cylindrical, slender and shallow body. The coxal plates are small and vary from triangular to trapezoidal in shape. The head lacks a rostrum, or has a vestigial one. In mature males, the 1st pereionite (body segment) bears a medio-ventral spine. Antenna 1 is greater than half the body length, with 20 segments, 17 of which are on the flagellum. Antenna 2 is about 2/3 the length of Antenna 1, and has profuse, long setae. The eyes are large and dark (Chapman and Dorman 1975; Chapman 2007).

The gnathopods are sexually dimorphic in this family. Gnathopod 1 is greatly enlarged in males, and much larger than Gnathopod 2, but in both sexes, they are carpochelate, meaning that segments 6 (the propodus) and segment 7 (the dactyl) fold around segment 5 (carpus) when gripping. In males, segments 2 and 5 are greatly enlarged. Segment 5 has a distal thumb-like tooth. In females, Gnathopods 1 and 2 are roughly equal and Gnathopod 1 is subchelate, meaning that the dactyl (segment 7) folds up against the propodus (segment 6) at an acute angle. In both sexes, Gnathopod 2 is subchelate, but segment 2 is longer in females, than in males.

Pereiopods (walking legs) 6 and 7 are about twice the length of 2-4 with 7 being slightly longer than 6. The first two uropod segments are biramous, but uropod 3 is uniramous and elongated (3X longer than wide) with many spines which are round in cross-section. The largest male was 22 mm long and the largest female was 13 mm. The cuticle is mottled gray to gray brown. The black eyes and green eggs are useful distinguishing marks in the field. This amphipod builds U-shaped tubes in muddy bottoms. Description from Chapman and Dorman 1975, Chapman in Carlton 2007, and Lowry et al. 2001-2015.

Grandidierella japonica is a tube-building gammarid amphipod, occurring in coastal waters and estuaries (Chapman and Dorman 1975; Lee et al. 2008; Pilgrim et al. 2013). Gammarid amphipods have separate sexes, brooded embryos, and direct development (Bousfield 1973). Males reach larger sizes than females, with maxima of 22 and 13 mm respectively (Chapman and Dorman 1975). Females in Newport Bay, California, began carrying embryos at ~3.8 mm length and released broods of 10-40 juveniles (mean of 25). Embryo numbers tended to increase with the female's size. Breeding was year-round, but numbers of embryos were smaller in winter.  Females in culture released a mean of 40 offspring, with a maximum of 150, in a 35-day period (Greenstein and Tiefenthaler 1997).

Grandidierella japonica is a widespread and abundant introduced amphipod on the West Coast. However, its ecological impacts have not been well-studied. It feeds by filtering suspended particles (phytoplankton and detritus), but also grazes epiphytic diatoms on seaweeds (Aikins and Kikuchi 2002).

Berkenbusch, Katrin; Rowden, Ashley A. (2007) An examination of the spatial and temporal generality of the influence of ecosystem engineers on the composition of associated assemblages., Aquatic Ecology 41: 129-147

Carlton, James T. (1989) Man's role in changing the face of the ocean: biological invasions and implications for conservation of near-shore environments, Conservation Biology 3(3): 265-273

Chapman, J.W., Dorman, J.A. (1975) Diagnosis, systematics, and notes on Grandidierella japonica (Amphipoda: Gammaridea) and its introduction to the Pacific coast of the United States, Bulletin of the Southern California Academy of Sciences 74: 104-108

Child, C. Allan (1979) Shallow-water pycnogonida of the isthmus of Panama and the coasts of middle america, Smithsonian Contributions to Zoology 293: 1-86

2008 Changes in latitude, changes in attitude: Emerging biogeographic patterns of invasion in the northeast Pacific.. www.pices.int/publications/presentations/PICES_17/Ann2008_S8/2_s8_Lee.pdf