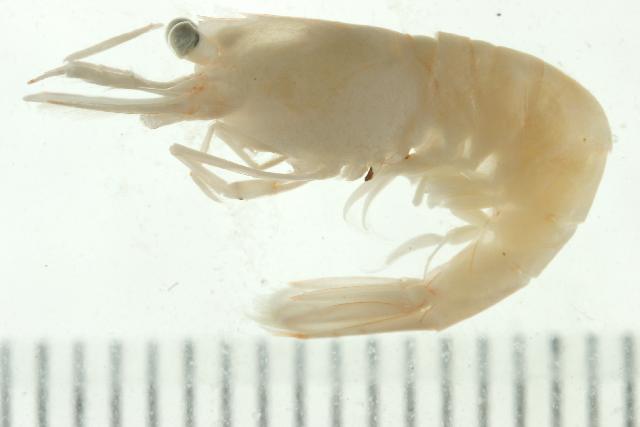 Palaemon kadiakensis is a small, translucent freshwater shrimp, which is commonly known as the Mississippi Grass Shrimp. It is native to the interior basin of North America, from the southern Great Lakes to the Gulf of Mexico. Introduced populations are known from tidal portions of the Sacramento-San Joaquin Delta, California. This species is sold through the aquarium trade, which is the likeliest vector for its introduction. There are no documented economic or ecological impacts for this species.

Palaemon kadiakensis is native to the interior basin of North America, from the southern Great Lakes region (Lakes Erie, Ontario, southern Lake Michigan) to the Gulf of Mexico (western Florida to northeastern Mexico) (Holthuis 1949a; Strenth 1976; Holthuis 1980). It has undergone a recent range expansion in the Ohio River, from former limits at the Ohio-Indiana border to the vicinity of Pittsburgh, Pennsylvania (Weisberg 2006; USGS Nonindigenous Aquatic Species Program 2015). This spread could be due to natural expansion, transport by fishermen, aquarium releases, or transport in barge ballast. In 2005, this shrimp was found in the Cosumnes River Preserve, California, at the northeastern edge of the Sacramento-San Joaquin Delta region, and by 2012 it was caught in the San Joaquin River and Georgiana Slough, where it is considered probably established (Brown and Hieb 2014).

Palaemon kadiakensis was found in 2005, in the Cosumnes River Preserve, California, at the northeastern edge of the Sacramento-San Joaquin Delta region. In 2012, a single specimen was caught in the San Joaquin River, and several specimens were reported in the tidal Georgiana Slough, where it is considered probably established. This shrimp is sold in the aquarium trade, which is considered the likeliest vector for its introduction (Brown and Hieb 2014).

Life History: In caridean shrimps, the copulating pair is usually oriented at right angles to one another, with the genital regions opposing each other. The modified first and second pairs of pleopods are used to transfer a spermatophore to a receptacle between the thoracic legs of the female (Barnes 1983). After mating, female palaemonid shrimps carry broods of fertilized eggs on their abdomen. These hatch into planktonic larvae with feathery appendages, called zoeae. Zoeae of shrimps lack the prominent spines seen in brachyuran crabs, and look quite shrimplike (Borad and Hubschman 1963). They go through several molts and metamorphose into postlarvae, which have well-developed walking legs. After a subsequent molt, the body takes on the adult shape.

Palaemon kadiakensis has 6 zoeal stages. At temperatures varying from 19.5 to 24C, development to the postlarval stage took 16 to 30 days. The first postlarval stage is a well-formed juvenile shrimp, with well-developed walking legs and pleopods (swimmerets).

Ecology: Palaemon kadiakensis is a widespread freshwater shrimp (Holthuis 1949a; Holthuis 1980), but we have found no reports of its occurrence in brackish waters. Strenth (1976) found that adult P.kadiakensis tolerated salinities up to 20 PSU, and suggested that local dispersal between tributaries through coastal waters was possible, but long-range dispersal through the ocean was unlikely. Larvae developed well in fresh water, but did not progress beyond zoea Stage 3 at 3.5 PSU (Hubschman 1975).

There are no known ecological impacts of introduced Palaemon kadiakensis. However, this shrimp is a potential competitor with a native freshwater shrimp (Syncaris pacifica), found in some freshwater streams in the San Francisco Bay drainage (Brown and Hieb 2014).

Strenth, Ned E. (1976) A review of the systematics and zoogeography of the freshwater species of Palaemonetes Heller of North America (Crustacea: Decapoda), Smithsonian Contributions to Zoology 228: 1-26