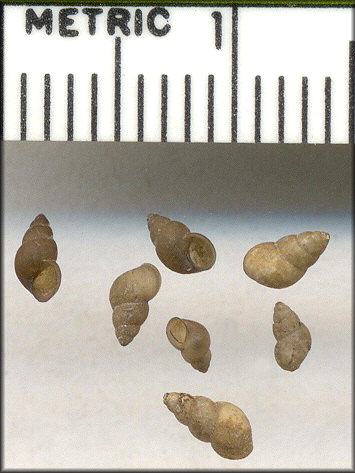 Spurwinkia salsa is commonly known as the Spurwink Hydrobe. It is a small estuarine snail which is native to eastern North America from New Brunswick to northern Florida. Introduced populations are known from San Francisco Bay, California, where it was first discovered in 2008. However, due to its small size, it may have been introduced years prior and been undetected. It inhabits marshes, mudflats, and submerged vegetation from the upper intertidal to shallow subtidal. No impacts have been reported from San Francisco Bay.

Spurwinkia salsa was found in 2008 at two locations in South San Francisco Bay, California: Eden Landing Ecological Reserve and the Alviso Salt Ponds, in saline intertidal marshes (Hershler et al. 2015). Possible vectors include seaweed used to pack baitworms, solid ballast of sailing ships, and less likely, oysters or ballast water. Given the inconspicuous size and appearance of the snails, they could have been introduced as early as the 19th century (Hershler et al. 2015).

The shell of Spurwinkia salsa is conical and dextrally coiled, with a sharp, pointed apex, consisting of 5-6 whorls. The whorls are very convex with moderately deep sutures. The aperture is 1/3 to1/2 of shell height, ovate to sub-circular, and sharply angled. The body whorl is relatively large, about 5/6 to 2/3 of shell height, compared to other hydrobiids (Pilsby 1905; Hershler and Davis 1980; Davis et al. 1982; Hershler et al. 2015). The apical whorl is rarely eroded. The shell has faint spiral grooves, and is greenish, 'with the luster of a dull silk' (Pilsbry 1905). Sometimes, when shells are heavily fouled with algae and detritus, the peristome (the region of the body whorl near the aperture) becomes detached and partly uncoiled, due to detritus and limonite deposits accumulating in the apertures. Adult female snails ranged from 3.3 mm to 10.5 mm, while males were 7 mm (Davis et al. 1982). A shell of a planktonic veliger is illustrated by Davis et al. (1982). 'Hydrobiid' snails, as a group, require identification by specialists, and are not adequately covered in general guidebooks (e.g. Abbott 1974; Morris 1975; Gosner 1978; McLean 2007). Snails in the genus Spurwinkia were once included in the family Hydrobiidae, but that family has been broken up, with many New World species now placed in the family Cochliopidae, including the genera Littoridinops, , and Pyrgophorus, among others (Hershler et al. 2013; Appletans et al. 2018).

Spurwinkia salsa ranges from cold-temperate climates (Maine, New Brunswick) to subtropical regions (Georgia, northern Florida). It occurs in estuaries at salinities from 0-35 PSU, but is not known to maintain populations in non-tidal fresh water (Bryant 1908; Davis et al. 1982; McAlpine et al. 2005; Pung et al. 2008). Veliger larvae of S. salsa were found in Maine estuaries at 10-28 PSU. Hydrobiid snails, such as L. monroensis, feed on organic deposits, benthic diatoms, and can also scrape microbes off sand particles (Lopez and Kofoed 1980). Spurwinkia salsa is host to at least six species of trematodes (Stunkard 1967), and is likely prey, for crabs, fishes, and shorebirds.

No ecological impacts have been reported for introduced populations in San Francisco Bay.

Bryant, Owen (1908) A note on the type locality of Paludestrina salsa at Cohassett, Mass, Nautilus 22: 82