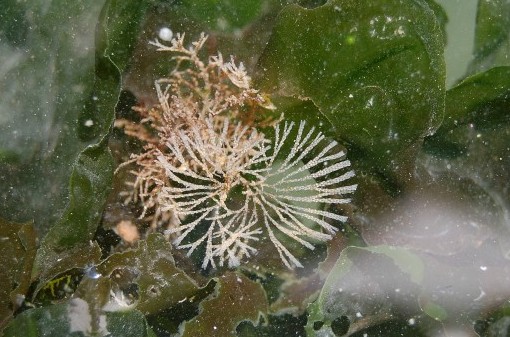 Bugulina simplex is a lightly calcified branching bryozoan. It was first described from the Adriatic Sea in 1886 and is thought to be native to this region, although its distribution is spotty in the larger Mediterranean. Introduced specimens were reported from Woods Hole, Massachusetts as early as 1872 (identified as B. flabellata) and are known from Connecticut to Maine. It has also been introduced to the Atlantic coast of Europe, Argentina, Australia and New Zealand. It is found in rocky subtidal habitats, but is also commonly reported from pilings and floats in harbors and marinas. No impacts have been reported for this species in its presumed native and introduced ranges.

Bugulina simplex was described from the Adriatic Sea by Hincks in 1886, and is probably native to that region, but even in the Mediterranean its records seem to be spotty. It is known from Barcelona Harbor, Spain (Pulpeiro and Gil 1995), but is missing from several local surveys in the Mediterranean. In Turkish waters, it is reported only from the Sea of Marmara and not from the Aegean or eastern Mediterranean coasts (Koçak, and Ayden Önen 2014). On the Atlantic coast of Europe, it was first found in the British Isles in 1958, and is now known from scattered populations from northern Spain to Scotland (Pulpeiro and Gil 1995; Ryland et al. 2011; Nall et al. 2014). This bryozoan may have been established in Woods Hole, Massachusetts as early as 1872, but was known chiefly from Eel Pond, near the Marine Biological Laboratory there, where it was long misidentified as B. flabellata (Verrill and Smith 1873; Rogick, in Smith 1964; Winston and Hayward 2012). By 2010, it had expanded its range from Long Island Sound to Casco Bay, Maine (McIntyre et al. 2011; Wells et al. 2014). It has also been introduced to the Azores, Australia, and New Zealand (Brock 1983; Gordon and Mawatri 1992; Cardigos et al. 2006). At most locations where it has been found, it is associated with artificial structures, including pilings and dock floats (Rogick, in Smith 1964; Ryland et al. 2011; Winston and Hayward 2012).

Bugulina simplex is believed to be native to the Mediterranean Sea. In the Atlantic waters of Europe, it was first found in 1957 in Holyhead, Wales, on the Irish Sea (Ryland 1958). Later records from the Atlantic coast are scattered, and mostly from artificial structures in harbors, such as dock floats, pilings, and sluice gates. These include occurrences from Riá de Ribadeo, Bay of Biscay, Spain in 1979 (Pulpeiro et al. 1983); Roscoff, Britany, France in 2002 (Ryland et al. 2011); several locations in Belgium and the Netherlands in 2000 (De Blauwe et al. 2001); and a number of marinas in England and Northern Ireland (Ryland et al. 2011; Nunn and Minchin 2013). The northernmost European records, so far, are from Kirkwall Marina, on Mainland Orkney, Scotland (59°N, Nall et al. 2014), and Lerwick, Shetlands in 2012 (Collin et al. 2015). Bugulina simplex is established in the Azores, where it is probably introduced (Morton and Britton 2000; Cardigos et al. 2006).

Aside from the coasts of Europe and northeastern North America, B. simplex is known from isolated locations in South America, Australia, and New Zealand. It is established in the Puerto Belgrano Naval Base, Argentina (Lichtschein de Bastida and Bastida1980, cited by Orensanz et al. 2002); and in Australia, from Adelaide Harbour (Brock 1985) and Port Philip Bay (Holmes 1982, cited by Hewitt et al. 2004). We know of only two records from New Zealand, a single colony from Lyttleton, South Island in 1988 (Gordon and Mawatari 1992, only encountered once) and an occurrence at Whangarei, North Island in 2003 (Ryland et al. 2011).

Colonies of Bugulina simplex form broad, fan-shaped, bushy tufts, about 300 mm tall. The branches are composed of 2-6 series of zooids which are widest at their origin. The zooids are large at 560-940 µm. The zooids usually bear one spine each on the inner and outer distal corners. Some specimens have two on the outer distal corner, while in specimens from New Zealand the corner spines are reduced or absent, but otherwise the colonies conform to the morphology of the species. Avicularia are attached to the marginal zooids only. Their length equals or exceeds the width of the zooid and their beaks curve downward. The ovicells are roughly hemispherical. The apertures are wide and open, but are occluded by a membrane during brooding. The colonies are yellow to yellow-orange. Description from: Rogick, in Smith 1964; Hayward and Ryland 1990; Ryland and Hayward 1991; Gordon and Mawatari 1992; and Winston and Hayward 2012.

Bugulina flabellata
In early (pre-1960s) literature dealing with the Woods Hole area, Bugulina simplex was identified as 'B. flabellata' (Ryland and Hayward 1991).

Life History- Bugulina simplex is a bush-like, calcified bryozoan, composed of many individual zooids. The zooids feed by extending the ciliated tentacles of the lophophore as a funnel, creating a current, driving food particles into their mouths. The food is guided along the tentacles and through the pharynx by the cilia. Larger food particles can be moved or captured by flicking or contracting the tentacles. The zooids are hermaphroditic and produce large yolky eggs, which hatch into lecithotrophic larvae that are planktonic for short periods (less than 1 day) (Wendt 2000). Larvae settle on a substrate and metamorphose into the first zooid of a colony, an ancestrula (Barnes 1983).

Ecology- Bugulina simplex has been found on rocky and shelly bottoms in Vineyard Sound, Massachusetts but is much more frequently found on pilings and floats in harbors and marinas (Verrill and Smith 1873; Sumner et al. 1913; Gordon and Mawatari 1992; De Blawuwe and Faase 2001; Ryland et al. 2011).

No impacts have been reported for Bugulina simplex in its presumed native and introduced ranges.