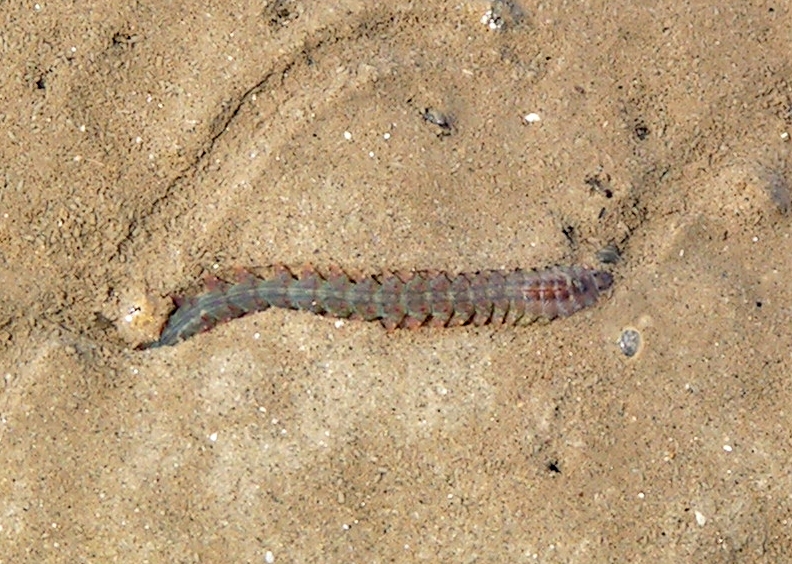 Hediste diversicolor is known as the Common Ragworm. It is native to the Northeast Atlantic from Northern Europe to Morocco and the Mediterranean, Black and Azov Seas. Introduced populations are known from the Northwest Atlantic including the Gulf of St. Lawrence, the Bay of Fundy, and the Gulf of Maine. It is commonly found in muddy sediments in intertidal and shallow subtidal estuarine habitats with low or highly variable salinity. We treat H. diversicolor as a single species, but cryptic species are likely present throughout its global range.

The Hediste diversicolor species complex is widely distributed in the Northeast Atlantic, from Sweden and Scotland south to Atlantic Morocco, and east to the southern Gulf of Bothnia, western Gulf of Finland, and the Mediterranean, Black, and Azov Seas. Typical habitats are shallow, muddy sediments, often in areas of low or highly variable salinity. Adult worms of some populations can survive for weeks in fresh water, but require salinities of at least 4-5 PSU for reproduction (Smith 1955; Smith 1964; Scaps 2002; Virgilio et al. 2009). Individual populations differ in salinity and temperature tolerances, and probably represent many cryptic species. However, the introduced range of H. diversicolor in the Northwest Atlantic is limited to the Gulf of St. Lawrence and the Gulf of Maine, and its discovery occurred relatively late (1922-1950s, Berkeley and Berkeley 1956; Pettibone 1963; Scaps 2002). Although Northwest Atlantic populations represent three cryptic species, their genetic diversity is greatly reduced relative to European populations (Breton 2003; Virgilio et al. 2009; Einfeldt et al 2014).

To our knowledge, the first collection of Hediste diversicolor on the East Coast of North America was in 1922 in the Shubenacadie River, Cobequid Bay, Nova Scotia, which is part of the Bay of Fundy. It was collected in 1935 near Reversing Falls, on the St. Johns River, New Brunswick (Berkeley and Berkeley 1956). In the southern Gulf of Maine, it was collected from Great Bay, New Hampshire and Boothbay Harbor, Maine in the 1950s, and from Gloucester, Revere, and Scituate in Massachusetts Bay by the 1960s (Pettibone 1963; U.S. National Museum of Natural History 2014; Yale Peabody Museum of Natural History 2014). Hediste diversicolor is widely distributed in the Gulf of Maine and Bay of Fundy (Pettibone 1963; Einfeldt et al. 2014). Pettibone (1963) also reports records from the St. Lawrence estuary and Gulf including the Saguenay River estuary and Chaleur Bay.

Genetic data suggest that there have been at least three separate introductions of H. diversicolor to the Northwest Atlantic (Breton et al. 2002; Audzijonyte et al. 2014; Einfeldt et al. 2014). Populations from the Gulf of St. Lawrence and the Gulf of Maine contain haplotypes not found in sampling of European populations, but these haplotypes do cluster within Northeast Atlantic populations, suggesting that they came from an un-sampled European source. Bay of Fundy populations came from the Baltic and have greatly reduced haplotype diversity, making them distinct from the Gulf of Maine and Gulf of St. Lawrence populations. Since eggs and larvae develop in the female's burrow, pelagic stages are absent, although young juveniles can swim short distances in the water column (Arndt 1989; Scaps 2002). Einfeldt et al. (2014) suggest that this polychaete was most likely introduced to the Northwest Atlantic in solid ballast (stones and sand) during the 19th century. We have not found reports of strong associations with oysters, or occurrences in fouling communities.

In the 1940s, nereid worms from the Black and Azov Seas were introduced to the Caspian Sea in order to enhance food resources for commercial fishes. These were initially identified as Neanthes succinea (Spassky 1945), but later samples were found to be Hediste diversicolor (Chepalyga and Tarasov 1997). Both species are now established in the Caspian Sea (Ghasemi et al. 2013). In the 1960s, H. diversicolor was introduced to the Aral Sea, again for enhancement of fisheries. The population has persisted during desiccation of the Aral Sea, due to water diversion (Aladin et al. 2008).

Hediste diversicolor has an elongate, cylindrical body, somewhat inflated anteriorly and flattened posteriorly, which is divided into up to 120 chaetigers. The head is roughly triangular, but with concave sides and rounded corners. The head bears four eyes, two frontal antennae, and pair of stout conical palps. The antennae are much shorter than the palps. The head is flanked by four pairs of tentacular cirri. The posterior pair of tentacular cirri is longest and can reach back to chaetigers 5-7. Ventrally and anteriorly, the muscular, extendable, proboscis consists of two rings, terminating in a pair of toothed, amber-colored jaws, with 5-8 teeth. It is possible to see, the proboscis and the jaws only when the organsim is relaxed or anesthetized. The proboscis is marked by patches of amber-colored paragnaths (teeth), arranged in species-specific patterns, and therefore are very useful for determination. These patterns and details of chaetal structure (acicula, homogomph, heterogomph, spiniger, falciger) are needed for identification of species (Pettibone 1963; Hayward and Ryland 1990; de Kluijver et al. 2014), but will not be dealt with here, except for the fact that the presence in the posterior neuroparapodia of homogomph chaetae is diagnostic.

The parapodia differ only slightly from anterior to posterior, with the posterior lobes being more elongated in shape. As in other nereids, the parapodia are divided into two major lobes, the notopodia (dorsal) and neuropodia (ventral). In the anterior segments, the notopodia are divided into three lobes, called ligules. The upper ligule is larger and triangular, and the middle (bearing a cluster of setae) and lower ligules shorter and conical. The chaeta-bearing lobes of the neuropodia resemble thick lips. In the posterior parapodia, the middle (chaeta-bearing) notopodial ligule is small or absent (Pettibone 1963).

Hediste diversicolor is an nereid polychaete, occurring in shallow, muddy littoral sediments, often in brackish waters and estuaries with highly variable salinities. Sexes are separate. Each worm lives in an individual burrow. As worms mature, their colors change from reddish brown to bright green. Typically, females release their eggs in their burrows in spring, triggered by rising temperatures (at 5-14C), and males enter the females burrows to fertilize the eggs. The eggs develop in the burrow, protected by the female, and hatch into benthic larvae, which feed on mucus and microbes. Larvae take 10-14 days to reach a length of 7-8 segments, when they leave the burrow. Larvae creep over the bottom and can swim for short distances. The females die a few days after the larvae leave the burrow, and males also die after spawning (Smith 1964; Smith 1976; Bartels-Hardeke and Zeeck 1990). The limited mobility of the adults and larvae probably accounts for the high genetic diversity and cryptic speciation in this species complex (Abbiati and Maltagliati 1996; Rohner et al. 1997; Breton et al. 2003; Audzijonyte et al. 2008; Einfeldt et al. 2014).

Hediste diversicolor burrows in sand, mud, gravel, and turf, where it builds Y- or U-shaped burrows. Burrow depth increases as the worm grows and also varies with temperature (Scaps 2002). Northern European populations (Denmark) of H. diversicolor tolerate temperature from -0.5 C to 30C (Kristensen 2004). This worm is studied for its wide, but variable salinity tolerance. Adults of some populations (Finland, Denmark, Tamar Estuary) tolerate freshwater (~0.02 PSU) for several weeks, while others can not tolerate salinities below 1 PSU (Smith 1955). Bigger differences may occur in salinity requirements during reproduction, being 4-5 PSU for Finnish populations, but 9 PSU for larval development of worms from Sweden (Smith 1964).

Hediste diversicolor is an omnivore. It can engage in active predation by extending from its burrow and catching prey with its jaws. It captures smaller particles, such as detritus and diatoms, by extending strings of mucus along the sides of its body, and then ingesting them. It also cultivates and ingests bacteria growing in the mucus lining the burrow wall (Scaps 2002). The worm is an important bioturbator, bringing sediment to the surface, and actively pumping oxygenated water into its burrow (Scaps 2002; Gillet et al. 2012). Predators include crabs, fishes, shorebirds, and humans, gathering baitworms (Scaps 2002; Rosa et al. 2008).

Hediste diversicolor is an important predator, bioturbator, and prey item in its native European range. It also has some economic importance as a bait-worm (Scaps 2002; Rosa et al. 2008; Gillet et al. 2012). However, its abundance and impacts are unknown in the estuaries of New England and the Maritime Provinces, where it has been introduced.

Abbiati, M.; Maltagliati, F. (1996) Allozyme evidence of geneitc differentiation between populaitons of Hediste diversicolor (Polychaeta: Nereidiae) from the western Mediterranean, Journal of the Marine Biological Association of the United Kingdom 76: 637-647

Scaps, Patrick (2002) A review of the biology, ecology and potential use of the common ragworm Hediste diversicolor (O.F. Müller) (Annelida: Polychaeta), Hydrobiologia 470: 203-218

Smith, Ralph I. (1955) Comparison of the level of chloride regulation by Nereis diversicolor in different parts of its geographical range, Biological Bulletin 109: 453-474