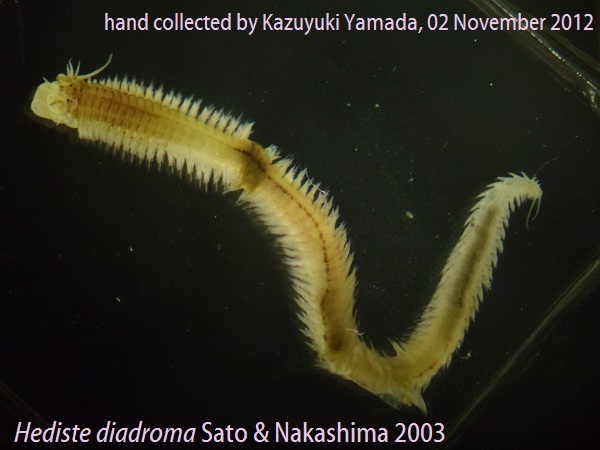 Hediste diadroma is a Nereid worm native to the Northwest Pacific. It was first discovered on the West Coast of North America in 2009 with introduced populations in Washington and Oregon. It is found in the upper, mesohaline reaches of estuaries, on lower intertidal mudflats and mud bottoms, salt marshes, oyster beds, and in southern Japan, mangroves. The worms live in U-shaped burrows, and are usually regarded as surface-deposit feeders, feeding on detritus and surface microalgae. Its overall abundance and geographical distribution in North American waters is unknown, as are its ecological impacts.

The nereid polychaete Hediste diadroma is native to the northwest Pacific. It was described from the mouth of Omoigawa River, Kyushu, which flows into the East China Sea. Subsequently, it was found on the Pacific coast of Japan as far north as Hokkaido. We do not have specific records from the Sea of Japan, but it is known from the Korea Straits (Fukuoka Prefecture) and the Yellow Sea (Sato and Nakashima 2003). Introduced populations are known from Oregon to British Columbia in the northeast Pacific.

The nereid polychaete Hediste diadroma was discovered on the West Coast of North America in 2010. Its overall abundance and geographical distribution in North American waters is unknown, as are its ecological impacts. It is a potential competitor with the native H. limnicola and with introduced populations of Neanthes succinea in brackish West Coast estuaries.

In October 2009, Japanese researchers attempted to collect the native H. limnicola in Washington and Oregon, for a study of its unique reproductive biology, which included self-fertilizing hermaphroditism and viviparous development. They reared immature polychaetes, which all matured into epitokous adults in March-April 2010. The epitokes swarmed at the surface and released eggs which developed into planktotrophic larvae. These worms were identified by molecular methods as H. diadroma (Nishizawa et al. 2014). Hediste diadroma was found in Willapa Bay, and the Columbia, Necanicum, and Nehalem River estuaries. They were collected at salinities of 4-18 PSU (Nishizawa et al. 2014). Specimens collected by Leslie Harris, in California , Oregon, and Washington were examined morphologically by Hiroaki Tosuji in 2013. The California specimens were all H. limnicola, but some of the Oregon and Washington specimens were identified as H. diadroma (Leslie Harris, personal communication 6/6/14). A recent paper has expanded the range of H. diadroma from Puget Sound south to Coos Bay, Oregon, and Tomales Bay, California. At most intertidal sites, H. diadroma outnumbered the native H. limnicola, but at Coos Bay, there were 25 H. limnicola and H. diadroma, and at Tomales Bay, 23 H. limnicola and only 2 H. diadroma, possibly suggesting that the range is still expanding southward. Genetic comparisons of Japanese and Northwest Pacific populations suggests that the West Coast introductions came from several Japanese source populations (Tosuji and Furota 2016).

Hediste diadroma is a nereid worm (commonly called a clam worm), characteristic of brackish waters. It has an elongate, cylindrical body, divided into up to 80-105 chaeta-bearing segments (chaetigers). The body is stout anteriorly and gradually tapers towards the pygidium (terminal segment of the body, including the anus). The dorsal surface is convex, while the ventral surface is relatively flat, with a mid-lateral groove. The head is shaped like a compressed pear, wider than its length. There are two pairs of eyes, in a trapezoidal arrangement, a pair of anterior antennae, and a pair of stout conical palps. The head is flanked by four pairs of tentacular cirri of unequal length. The muscular, extendable, proboscis protrudes below the head. It consists of two rings, terminating in a pair of amber-colored jaws, with 6-9 teeth each. The proboscis is marked by patches of amber-colored paragnaths (teeth), arranged in species-specific patterns (see Sato and Nakashima 2003) for descriptions of patterns in H. diadroma. These patterns and details of chaetal structure (acicula, homogomph, heterogomph, spiniger, falciger) are needed for identification of species (Blake and Ruff in Carlton 2007), but will not be dealt with here.

The parapodia of the first two chaetigers are uniramous, but all the following parapodia are biramous. The first two chaetigers do have a dorsal cirrus and smaller lobes, called ligules. The subsequent anterior parapodia are divided into two branches, which are in turn divided into the ligules. The dorsal branch is called the notopodium. It has a dorsal cirrus, which does not extend beyond the ligules. The dorsal ligule is large and triangular, the lowest one is smaller, and the middle one is smallest, about 1-2 to 2/3 the size of the ventral ligule. The middle ligule is called the pre-chaetal lobe, with a bundle of thin chaetae. In posterior chaetigers, this ligule is reduced to a small protrusion. The dorsal ligule is widest in anterior chaetigers, and narrower on middle and posterior chaetigers, while the dorsal cirri also diminish in posterior chaetigers. The neuropodium has a pre-chaetal ligule, a broader median post-chaetal ligule, with a bundle of thicker chaetae, a ventral (post-chaetal) ligule, and a ventral cirrus. The pre-chaetal and post-chaetal ligules are separate on the first 10 chaetigers, and are then fused. The ventral ligule and cirrus decrease in size in the posterior direction. Japanese specimens are up to 150 mm in length, with 60-110 chaetigers (Sato and Nakashima 2003), but the largest North American specimen was 43 mm (Nishizawa et al. 2014). This worm is reddish or greenish-brown in life, and fades to cream-color in preservation (Sato and Nakashima 2003). Male Hediste spp. are yellow and white, with a prominent dorsal blood vessel, while females are green (Hanafiah et al. 2006, see photo).

Hediste diadroma undergoes a dramatic morphological change (epitoky) when breeding, with both sexes changing into a 'heteronereis' form. The body wall becomes thin and transparent, with greenish eggs in mature females and white sperm in males. The eyes are slightly enlarged. The ligules of the parapodia become lengthened in both sexes. Chaetae are modified in the chaetigers of the middle region of the body. The mature worms form large swarms, actively swimming at the surface, discharging eggs and sperm (Sato and Nakashima 2003). The planktotrophic larval stages were described and illustrated by Tosuji and Sato (2006).

Hediste atoka
Hediste atoka is native to the Northwest Pacific, and is morphologically quite similar to H. japonica and H. diadroma but lacks a reproductive swarming stage (Sato and Nakashima 2003).

Hediste japonica
Hediste japonica is native to a limited range in the Northwest Pacific, around Kyushu, Japan. Hediste diadroma was formerly considered conspecific with H. japonica (Sato and Nakashima 2003).

Hediste limnicola
Hediste limnicola is native to the Northeast Pacific estuaries (British Columbia to California). Morphologically it is very similar to H. diadroma during most of its life, but is very different in its mode of reproduction and development. It is hermaphroditic, self-fertilization and viviparous, and has at least one population in a freshwater lake (Blake and Ruff 2007; Nishizawa et al. 2014).

Hediste diadroma is a nereid worm, characteristic of brackish waters, and the middle and upper reaches of estuaries. Sexes are separate. Reproduction involves a dramatic metamorphosis (called epitoky), in which the parapodia are modified for swimming, the eyes are enlarged, the body wall thins, and the body is swollen with eggs or sperm (Kikuchi and Yasuda 2009; Sato and Nakashima 2013). In Japan, the animals swarm in the mouths of estuaries at night on high tides, from November through April. Water temperatures at this time are 5-15°C (Hanafiah et al. 2006). Immature animals, collected in Washington and Oregon estuaries in late October, metamorphosed in March and early April when kept in the laboratory at 18°C (Nishizawa and Sato 2014). Eggs and sperm are shed into the water, and the adults die afterwards (Kikuchi and Yasuda 2009).

Fertilized eggs develop into trochophores which hatch out of jelly-like capsules in 26-40 hours. By 3 days, they develop into metatrochophores with beginnings of segmentation and protruding chaetae. By 4 days, the larvae became nectochaetes, with 3 chaetigers. This stage is prolonged, and can last up to 12 days. During the 4-chaetiger stage, at 16-30 days, the larvae begin to alternate between crawling on the bottom and swimming, but settlement is a gradual process, without a clear boundary. Larvae develop in waters of 22-30 PSU salinity (Tosuji and Sato 2006). Immature worms presumably migrate up the estuary by swimming and/or tidal transport, and are most abundant in the mesohaline reaches of estuaries (4-19 PSU, Sato and Nakashima 2003; Hanafiah et al. 2006; Kikuchi and Yasuda 2006; Tosuji and Sato 2006; Nishizawa et al. 2014).

Immature H. diadroma are most abundant in the upper, mesohaline reaches of estuaries, on lower intertidal mudflats and mud bottoms, salt marshes, oyster beds, and in southern Japan, mangroves (Sato and Nakamura 2003; Hanafiah et al. 2006; Tosuji and Sato 2006; Kanaya et al. 2008). The worms live in U-shaped burrows, and are usually regarded as surface-deposit feeders, feeding on detritus and surface microalgae (Kanaya et al. 2008). However, they are capable of secreting a mucous net, and using body movements to generate a downward current, trapping particles in the net, which is then swallowed. Toba and Sato (2013) observed this filter-feeding behavior in all three Japanese species of Hediste, and note reports of its occurrence in the North Atlantic H. diversicolor as well. In a marine dominated Japanese lagoon, isotopic measurements indicated that Hediste spp. fed mostly on benthic diatoms, while in a river-dominated lagoon, terrestrial plant detritus was the predominant food (Kanaya et al. 2008). At a mudflat site on Ise Bay, Japan, H. diadroma was a major food item for shorebirds (Iwamatsu et al. 2011). Other likely predators include shrimps, fishes, and crabs.

The nereid polychaete Hediste diadroma was discovered on the West Coast of North America in 2009. Its overall abundance and geographical distribution in North American waters is unknown, as are its ecological impacts. It is a potential competitor with the native H. limnicola and with introduced populations of Neanthes succinea in brackish West Coast estuaries.

Competition: A recent paper indicates that Hediste diadroma has replaced H. limnicola in the more saline intertidal portions of estuaries, while H. limnicola remained dominant at salinities below 5 PSU and in subtidal habitats (Tosuji and Furota 2016).