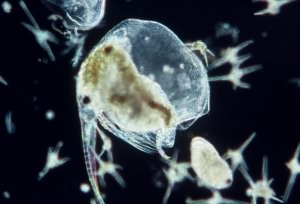 Bosmina coregoni is a small planktonic, freshwater cladoceran species or species complex. It was first described from Britain and is believed to be native to Eurasia. It was first detected in North America in the Great Lakes in 1966 and is known from inland waters throughout the area (Canada and US). In 2008, it was reported from tidal waters near the mouth of the Columbia River in Astoria, Oregon. This is the only tidal occurrence we know of for this species and the establishment status of this population is unknown.

Cladocerans of the genus Bosmina have an oval carapace covering the body and legs, and a distinct head, with a prominent median eye. The first antennae are rigidly fixed to the head, tapered to a point and curved, resembling elephant tusks. They have several sensory hairs about halfway between the tip and base, but none at the tips. The second antennae, the primary appendages for locomotion, are biramous, with one branch having three segments and the other with four. The posterior part of the intestine is sharply angled ventrally, and terminates with a postanal claw and a set of spines called the pecten. Adult parthenogenetic females have a dorsal brood pouch. Under favorable conditions, parthenogenetic females predominate in the population, and males are quite rare. Males lack eggs in the brood pouch, have longer antennule and setae than females, and have a copulatory hook. Fertilized females produce large, thick-walled eggs, enclosed in the cast-off brood-chamber, called an ephippium. Description based on Barnes 1983, Thorp and Covich 2001, and De Melo and Hebert 1994b.

Bosmina (Eubosmina) coregoni is distinguished by the absence (or greatly reduced size) of a mucro, a spine in the corner of the postanal angle of the carapace. The carapace is arched, and the post-abdominal claw has only a proximal pecten. The pecten consists of four short spines, followed by a row of longer spines, increasing in height distally. There is a sensory bristle near the tip of the rostrum. The first antenna is at least 50% of the body length. Females are 432-757 µm long (De Melo and Hebert 1994b).

The relationship among named forms of the subgenus Eubosmina, including B. coregoni, are uncertain because of the high phenotypic variability of these animals to environmental cues, including temperature, day length, and predation. Haney and Taylor (2003) considered B. longispina to be the ancestral form of the subgenus, arising in Eurasia, giving rise to a variety of species (B. longispina, B. maritima, B. obtusirostris, B. kessleri, and B. thersites), and colonizing northern North America. Kotov et al. (2009) treat Bosmina c.f. coregoni as a species complex which includes forms identified as B. coregoni gibberum, B. longispina, B. obtusirostris, B. kessleri, and B. thersites. A brackish water form (called variously B. maritima, B. longispina maritima or B. coregoni maritima), from the Baltic Sea, may be conspecific with B. coregoni, but was treated as a separate species by De Melo and Hebert (1994b).

Bosmina freyi
Bosmina (Bosmina freyi) is widely distributed in eastern North America, including the Great Lakes, and also has been collected in California lakes. It is one of the dominant zooplankton in the tidal freshwater Hudson estuary (Pace et al. 1998), and in the Mattaponi River, Virginia, a tributary of the Chesapeake Bay (Hoffman et al. 2008). This cladoceran has a prominent mucro (De Melo and Hebert 1994b; Kotov et al. 2009).

Bosmina longirostris
Bosmina (Bosmina) longirostris was described from Europe. Although this species has been casually reported throughout North America, De Melo and Hebert (1994b) collected specimens fitting that description, only from one lake in California. Kotov et al.(2009) were skeptical of records outside western Eurasia. This species has a prominent mucro (De Melo and Hebert 1994b).

Bosmina maritima
Bosmina (Eubosmina) maritima is a brackish-water form native to the Baltic Sea, and reportedly introduced to the Great Lakes. This form, with a prominent mucro, is often treated as a subspecies of B. longispina (De Melo and Hebert 1994b). Its status as a distinct species or subspecies is uncertain (Kotov et al. 2010).

Bosmina oriens
Bosmina (Eubosmina) oriens is known from freshwaters of northeastern North America (Newfoundland to Massachusetts). It has a prominent mucro (De Melo and Hebert 1994b).

Bosmina tubicen
Bosmina (Neobosmina) tubicen was described from Venezuela and was collected in Ontario, New Brunswick, Texas, and eastern Mexico by De Melo and Hebert (1994b). It has a prominent mucro.

Bosmina coregoni is a freshwater cladoceran species or species complex, first described from Britain, and believed to be native to Eurasia and introduced to North America (Haney and Taylor 2003; Kotov et al. 2009). It was first detected in North America in the Great Lakes in 1966, probably introduced in ballast water (Mills et al. 1993). It has spread to smaller lakes in the Great Lakes drainage; and to Lake Winnipeg, Manitoba; and reservoirs in Missouri (Mabee 1998; De Melo 1994a; USGS Nonindigenous Aquatic Species Program 2013). In 2008, B. coregoni was first collected on the West Coast of North America in the lower Columbia River estuary at Astoria, Oregon. It was also found in Lake Washington, Seattle in 2011, and in reservoirs in the interior Columbia River basin, in eastern Washington in 2012 (Smits et al. 2013). As a result of the difficulty and confusion in the systematics and identification of Bosmina spp., it is probably frequently overlooked and sometimes erroneously reported (De Melo and Hebert 1994b). Currently, it is found in 13 states, in the Atlantic, Pacific, Mississippi, and Great Lakes watersheds (Beaver et al. 2018).

Bosmina coregoni was first collected in November 2008 near Astoria, Oregon in the Columbia River Estuary. It occurred at very low densities, up to 0.123 animals L-1, and was present through 2011 (Smits et al. 2013). It occurred in an assemblage dominated by native and introduced fresh and brackish-water copepods (Eurytemora affinis, Diacyclops thomasi, Pseudodiaptomus forbesi, Limnoithona tetraspina, Sinocalanus doerrii) (Bollens et al. 2012; Smits et al. 2013). Bosmina coregoni also occurred in nontidal freshwater in the Pacific Northwest region, in Lake Washington (Seattle, WA) in June 2011 through July 2013, reaching peak densities of 10.5 animals L-1, and in reservoirs in eastern WA, in the upper Columbia basin, in August 2012 (Smits et al. 2013). Identifications were confirmed by molecular methods and examination of males (done by Drs. Alexey A. Kotov and Derek Taylor) (Smits et al. 2013). In long-term sampling (2005-2013) from a pier in Vancouver, Washington, on the tidal Columbia river, it comprised 0.5 % of zooplankton individuals and reached a peak abundance of 846 m-3, but declined to low levels (7 m-3) by 2013 (Dexter et al. 2015). Bosmina coregoni appears to have had a 'boom-and-bust' invasion in the Columbia River. It is likely that that B. coregoni is more widespread in western North America, beyond these three collection sites. Ballast water is an unlikely vector to the Columbia estuary, since this species is not known to occur in eastern Asia (Kotov et al. 2009). Other possible vectors are those that have been suggested for interior lakes, including: stocked fishes, fishing gear, boats, aquatic plants, and natural dispersal by waterfowl (Smits et al. 2013).

Bosmina coregoni is probably more widespread than published records indicate. It is reported on several species lists for freshwater tributaries of Chesapeake Bay (Brownlee and Jacobs 1987; Steinberg and Condon 2009), but these records may have resulted from use of a European zooplankton key (George Mateja 1998, personal communication). We have no reliable records from East Coast tidal waters.

Cladocerans of the genus Bosmina can develop parthenogenetically from unfertilized eggs in a female's brood pouch. The juveniles have the basic form of miniature adults, and molt and grow as they feed. After a period of growth, parthenogenetic eggs are deposited in the female's brood pouch. For the closely related B. maritima at 10-15 C, the eggs were produced 10.6-5.9 days after birth, and took 7.3- 4.3 days to develop (Kankaala and Wulff 1981). When the embryos hatch, the female molts, and a new batch of eggs are deposited in the brood pouch. A female may have several successive broods. Female B. maritima at 10-15 C, on average, had 2 broods, consisting of 1.3-3.3 eggs each. This Swedish Baltic population of B. maritima had a generation time of 18.3-10.2 days (Kankaala and Wulff 1981). Freshwater populations of B. coregoni, acclimated to higher temperatures, probably have much more rapid rates of population growth.

Bosmina spp. can reach high population densities by parthenogenetic reproduction, developing populations that are all female or female-dominated. Environmental factors such as temperature, day-length, the presence of predators, etc., appear to stimulate the production of males. Females, when fertilized, produce large resting eggs, in pairs, enclosed in a capsule formed by modifications of the brood chamber (called an ephippium). The ephippium is cast off when the female molts. It settles into the sediment, but may be stimulated to develop by favorable conditions of light and temperature. Sexual reproduction of resting eggs provides a means of surviving winter, droughts, or other adverse conditions, as well as providing new genotypes for potentially altered conditions (Barnes 1983; Kankaal 1983). We are not aware of studies on specific cues affecting sexual reproduction, or hatching of resting eggs in B. coregoni. In B. maritima in Sweden, resting egg production was greatest in late summer and fall, with extensive, but unsuccessful mis-matched hatching in October and November, and successful hatching in the spring, leading to a planktonic population (Kanakaala 1983).

Taxonomic problems make it difficult to define the range and habitat of B. coregoni, but studies using genetics and detailed morphological examination indicate that it is native to northern and eastern Europe, from Scandinavia to central Europe and eastern Russia (Demelo and Hebert 1994a; Kotov et al. 2009). Records from tropical and subtropical regions (Brazil, Iran, Florida- Zoological Record search) are presumed to be misidentifications. This cladoceran appears to be adapted to a temperate climate, and its introduction into the Great Lakes, Lake of the Woods, and Lake Winnipeg indicate its tolerance to long winters and cool summer waters (Demelo and Hebert 1994a; Suchy and Hann 2007; Suchy et al. 2010). Bosmina coregoni sensu stricto is a freshwater species, and information on its salinity tolerance is limited. Nauwerck (1991) reports an upper salinity tolerance for B. coregoni from lakes on the Baltic coast of Sweden. The closely related (possibly conspecific) Baltic form B. maritima tolerates salinities up to 12.5 PSU (Ackefors 1971). In a simulated ballast water exchange experiment, B. coregoni tolerated an hour at 8 PSU but died at 14 PSU (Ellis et al. 2009).

Bosmina sp. are filter-feeders, creating a current and filtering phytoplankton, detritus, and bacteria in the water column. They have some capacity for selective feeding (Barnes 1983; Sellner et al. 1993; Pace et al. 1998; Hoffman et al. 2008). Bosmina spp. are less sensitve to blooms of colonial toxic cyanobacteria than larger cladocerans, such as Daphnia spp., possibly in part because their smaller carapace and weaker filtering current excludes large colonies, and partly because of greater tolerance to cyanobacterial toxins (Fulton and Paerl 1987). Bosmina coregoni in the Great Lakes is prey for planktivorous fishes, such as Alosa pseudoharengus and whitefishes (Coregonus spp.), and for the introduced predatory cladocerans Bythotrephes longimanus and Cercopagis pengoi (Laxon et al. 2003; Barbiero et al. 2004).

The freshwater cladoceran Bosmina coregoni has become one of the dominant zooplankters of the Great Lakes, particularly in Lake Erie but was reduced to low levels of abundance after the invasion of the predatory cladoceran Bythotrephes longimanus (Mills et al. 1993; Barbiero, et al. 2004). The extent to which B. coregoni has affected native zooplankton composition or food webs is unclear. The very low abundances of this cladoceran in the Columbia River estuary (Smits et al. 2004) indicate that detectable impacts are unlikely, at this time.

Taylor, Derek J.; Ishikane, Christine R.; Haney, Robert A. (2002) The systematics of Holarctic bosminids and a revision that reconciles molecular and morphologicale volution, Limnology and Oceanography 47: 1485-1495