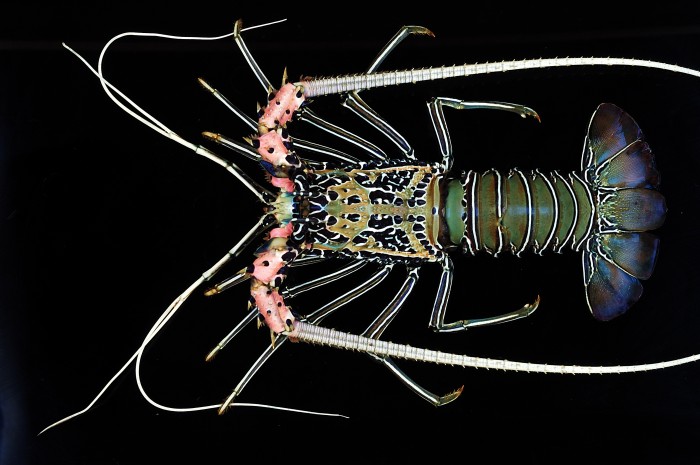 Panulirus versicolor, commonly known as the Painted Spiny Lobster, is native to the Indo-Pacific. Its distribution spans from the Red Sea to South Africa, southern Japan, northern Australia, Micronesia and Polynesia. In August 2012, one specimen was caught in the Brunswick River, Georgia, the first reported non-native occurrence of this lobster. This species is found in rocky habitats and coral reefs from the low-tide mark to 15 m depth. In its native range it is locally fished and harvested for the aquarium trade. It is a popular aquarium species because of its striking coloration. Its introduction in Georgia may be from an aquarium release or through ballast water, as the specimen was caught 500 m from a cargo-ship dock.

Panulirus versicolor has a broad native range in the Indo-Pacific, spanning from the Red Sea to South Africa, southern Japan, northern Australia, Micronesia, and Polynesia (Holthuis 1991; Appeltans et al. 2013). In August 2012, one specimen was caught in the Brunswick River, Georgia, the first reported wild non-native occurrence of this lobster, a popular aquarium species (Page et al. 2013).

In August 2012, one specimen of P. versicolor, about 180 mm in size, was caught by a fisherman in the Brunswick River, near the commercial port of Brunswick, GA and given to the Georgia Department of Natural Resources. It was identified as the Indo-Pacific species P. versicolor (Page 2013). This species is a popular aquarium animal, because of its striking coloration. Web searches indicate that it is sold and kept worldwide. Ballast water transport is a possibility - spiny lobsters have long-lived planktonic larvae, and the lobster was caught 500 m from a cargo-ship dock (Barnes 1983; Page 2013).

Spiny Lobsters (Panuluridae) lack the prominent claws and rostrum associated with true lobsters (Homarus spp.) Their carapaces have two frontal horns and are armed with numerous dorsal spines. The second antennae are thick, with spines on their first three basal segments, and are about equal to their body length. Panulirus versicolor has smooth abdominal somites, lacking a transverse groove. Abdominal somites 1-6 have a distinct, continuous transverse band along the posterior margins, with dark bands on either side of them. The third maxilliped lacks an exopod. The antennular plate, at the base of the 1st antennae, has 4 strong spines, in a square. The total body length reaches 400 mm, but the average maximum size is around 300 mm. Males tend to be larger than females. The carapace has a whitish background, with large areas of bluish-black. The peduncles of the antennae are pinkish, with thick black spines, and the flagellae of the antennae are white. (Description from: Holthuis 1991; Page 2013)

Panulirus versicolor is a mid-sized benthic decapod, with separate sexes. It matures at about three years of age, and about 82 mm length (MacDonald 1982; Frisch 2007a, cited by Page 2013). Males tend to be larger than females (Holthuis 1991). Mating in spiny lobsters (P. argus) involves transfer of a spermatophore from the male to the female. The spermatophore remains in place until the eggs are extruded at spawning, when the female scratches the spermatophore, as the eggs are attached to pleopods on the abdomen (Smithsonian Marine Station 2013). Eggs of spiny lobsters hatch into planktonic larvae, called phyllosomae- they look a little like squashed spiders, but with leaf-like, transparent bodies, and long, spindly appendages. Larvae of P. argus spend 8-11 months in the plankton and grow from 2 to 30 mm in length. The larvae metamorphose into a non-feeding puerulus stage, which settles in shallow water (Johnson and Allen 2005; Smithsonian Marine Station 2013). Details of larval development of P. argus are not known, but are believed to be rather similar.

Habitats for P. versicolor include rocky regions and coral reefs, often on the seaward edges of coral plateaus, and other structures, from the low-tide mark to 15 m depth. The lobsters are nocturnal, often hiding in crevices by day, and are usually not gregarious (Holthuis 1991). Their food includes benthic invertebrates and detritus. The chief predators are larger fishes and sharks (Frisch 2007a, cited by Page 2013). This species' geographical range and reported occurrences suggests limited tolerance for low temperatures, and low salinity.

Panulirus versicolor is locally fished within its native range, harvested for the aquarium trade, and sometimes sold mounted and dried as a curio for tourists (in Thailand) (Kuthalingam et al. 1980; Holthuis 1991). Web searches indicate that P. versicolor is a popular aquarium species, but it is aggressive and requires a large aquarium. Only one specimen is known, so far, from North American waters, and no impacts have been reported. Because of its presence in the aquarium trade, releases elsewhere are possible.

Holthuis, L. B. (1991) Marine lobsters of the world. An annotated and illustrated catalogue of species of interest to fisheries known to date., FAO Fisheries Synopsis 13(125): 1-292