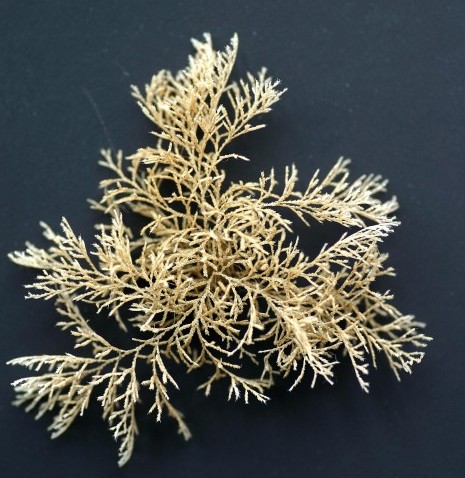 Tricellaria inopinata forms erect, bushy, and branched colonies which are cream-to-buff in color. Introduced from the Pacific, it was described as a new species from the Venice Lagoon, Italy, but may have older Pacific-based names. Introduced populations are known from Massachusetts and Northern Europe. It is a fast-growing fouling organism and grows attached to wood pilings, floats, rocks, seaweeds, seagrasses, oysters, mussels and other hard substrates. In some locations it is reported to replace other species of arborescent bryozoans, but its economic and ecological impacts require more study.

Tricellaria inopinata, an introduced species in the Mediterranean, was first described from the Venice Lagoon, Italy (d'Hondt and Occhipinti Ambrogi 1985). It is doubtless native to the Pacific Ocean, where one or more very closely related (or the same) species occurs, under additional names, such as T. porteri, T. occidentalis, and T. occidentalis catalinensis (Dyrynda et al. 2000). In 1982, T. inopinata was found in the Venice Lagoon (d'Hondt and Occhipinti Ambrogi 1985), in 1998 it was found in Poole Harbor, on the English Channel (Dyrynda et al. 2000), and in 2000, it was found on the Atlantic coast of Spain (Pulpeiro et al. 2002), and the coasts of Belgium, the Netherlands, Germany and Norway (de Blauwe and Faase 2001; Buschbaum et al. 2011; Cook et al. 2013; Porter et al. 2015). In Europe, it currently ranges north to Norway, west to the Atlantic coasts of Scotland and Ireland, and south to Cadiz, Spain (Buschbaum 2012; Cook et al. 2013). In 2010, this bryozoan was found on the Atlantic coast of the US, in Eel Pond, Woods Hole, Massachusetts where it is now established (Johnson et al. 2012), and since then it has been found north to the Boston region (James T. Carlton, personal communication 2013).  Tricellaria spp. washed ashore in central Oregon in 2012 on a floating dock which was swept away from the Japanese coast during the 2011 tsunami, and was identified morphologically as T. inopinata, suggesting that Japan is the native region (McCuller and Carlton 2018).

In 2010, Tricellaria inopinata was discovered in Eel Pond, a small lagoon adjacent to Woods Hole Harbor, Massachusetts (MA) (Johnson et al. 2012). The population expanded in 2011, displacing native arborescent bryozoans (Johnson et al. 2012). It was subsequently found in the Boston region, in Boston Harbor, Marblehead and Gloucester, where it is also now established (collections by Adrienne Pappal; James T. Carlton, personal communication; Johnson and Woollacott 2015). Genetic analysis indicates that the population in Boston Harbor was probably introduced from the Eel Pond population, but the Marblehead, and Gloucester populations were introduced independently (Johnson and Woollacott 2015). In a 2013 survey, it had extended its range southward to the mouth of Narragansett Bay, Rhode Island and northward to Hampton River, New Hampshire (Wells et al. 2014).

Tricellaria inopinata was first discovered in the lagoon of Venice, at the head of the Adriatic Sea, a region with a well-studied fauna, in 1982. This bryozoan was found associated with wooden pilings and other man-made structures, and rapidly spread within the lagoon (d'Hondt and Occhipinti Ambrogi 1985; Occhipinti Ambrogi and d'Hondt 1994). In 1998, it was discovered in the Marano Lagoon, 70 km to the east (Dyrynda et al. 2000).

JTMD species. Tricellaria inopinata forms erect, bushy, branched colonies which are cream-to-buff in color and attached to hard substrates by rhizoids. The stem is composed of two rows of autozooids, with the joints between zooids in one row, roughly corresponding to the midpoint of the zooids in the other row. Internodes (branching points) occur every 3-19 zooids (odd numbers only, most commonly 3, 5 and 7). Each zooid is about 450-650 µm, with an oval opening (opesia) about 200-280 µm long, and 150-200 µm wide. A third zooid occurs in each internode, between the two branches. The number of zooids between internodes increases towards the tips of the branches. The autozooids are tapered at their proximal end, but enlarged at the distal end. Avicularia (defensive zooids) project from the sides of the branches, extending 150-200 µm on each side, and each bearing a triangular mandible. Three to four spines are present on the outer margins of the zooid and 2-3 spines on the inner margin. The most proximal of the external spines often has double tips. The middle zooid in the internodes bears a large median spine, and has at its base a small opening. The scutum is shield-like, with a flattened spine which partially covers the opening (opesium). It varies greatly in shape and size within the colony, sometimes with two or three lobes. Some autzooids in their colony usually have globular ovicells (brooding chambers), located distal to the opesium, and 150-160 µm in diameter (description from: d'Hondt and Occhipinti-Ambrogi 1985; Dyrynda et al. 2000; Johnson et al. 2012).

Among the features which distinguish T. inopinata from T. occidentalis and T. porteri are the variability of the scutum, the number of zooids between internodes, and the number of spines in the angles between the joints. Tricellaria inopinata has 3-19 zooids between internodes, T. occidentalis has 3-5, and T. porteri has 3-13. In T. inopinata, the proximal external spine of the zooids is sometimes bifid (two-tipped), but is never bifid in the other two species. A single median spine is present in the angle between branches in T. inopinata, while the other two species have two spines, with a space between. In T. inopinata, the scutum is highly variable, from a slender projection, to an antler-like structure, while in T. occidentalis, it is spatula-like, and in T. porteri it is kidney-shaped (description from: d'Hondt and Occhipinti-Ambrogi 1985; Dyrynda et al. 2000; Johnson et al. 2012).

A bryozoan from the West Coast of the US, described as T. occidentalis var. catalinensis (Robertson 1905) is similar to T. inopinatas (Dyrynda et al. 2000), but Winston and Ryland (2012) note differences in the description relative to ovicell shape, pore pattern, and spine number and position.

Life History- Tricellaria inopinata is a bush-like, calcified bryozoan, composed of many individual zooids. The zooids feed by extending the ciliated tentacles of the lophophore as a funnel, creating a current, and driving food particles into their mouths. The food is guided along the tentacles and through the pharynx by the cilia. Larger food particles can be moved or captured by flicking or contracting the tentacles. The zooids are hermaphroditic, and produce large yolky eggs, which hatch into lecithotrophic larvae, which are planktonic for short periods (a few hours). Larvae settle on a substrate and metamorphose into the first zooid of a colony, an ancestrula (Barnes 1983; Occhipinti Ambrogi and d'Hondt 1994).

Ecology- Tricellaria inopinata grows attached to wood pilings, floats, rocks, seaweeds, seagrasses, oysters, mussels and other hard substrates It has been found attached to other exotic fouling species, including the seaweeds Sargassum muticum and Undaria pinnatifida, and the tunicate Styela clava (d'Hondt & Occhipinti Ambrogi 1985; Dyrynda et al. 2000). It has a strong preference for sheltered locations, and tolerates some variation in salinity (Occhipinti Ambrogi and d'Hondt 1994; Dyrynda et al. 2000).

Shipping/boating- Tricellaria inopinata probably contributes to fouling of recreational boats, docks, ropes, etc. (Dyrynda et al. 2000; Galil and Occhipinti-Ambrogi 2006), but its economic impacts cannot be easily separated from those of the rest of the fouling community.

Arenas, F. and 13 authors. (2006) Alien species and other notable records from a rapid assessment survey of marinas on the south coast of England., Journal of the Marine Biological Association of the United Kingdom 86: 329-1337

Cook, Elizabeth J. and 5 authors (2013) Distribution of the invasive bryozoan Tricellaria inopinata in Scotland and a review of its European expansion, Aquatic Invasions 8: In press

ICES Advisory Committee on the Marine Environment (2011) <missing title>, International Council for the Exploration of the Seas, Copenhagen. Pp. 1-180

Occhipinti Ambrogi, A. (2001) Transfer of marine organisms: a challenge to the conservation of coastal biocoenoses, Aquatic Conservation: Marine and Freshwater Ecosystems 11: 243-251