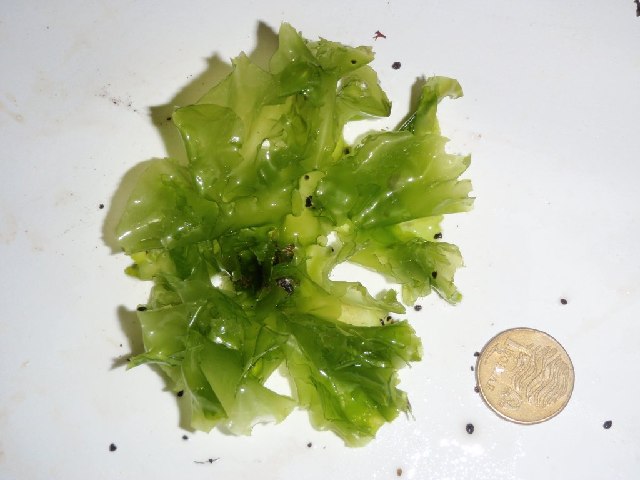 Ulva australis is a green alga commonly known as the Lacy Sea Lettuce. Many species of Ulva are recognized globally and their taxonomy and biogeography are still being worked out. Genetic analysis shows that U. australis is native to the Northwest Pacific (Japan and South Korea), although it was first described from South Australia in 1854. Introduced populations are widespread in Australia, New Zealand, Chile, the West Coast of North America (Mexico to Canada), the East Coast of the US (New Hampshire) and Europe (Netherlands to the Mediterranean). It grows attached or free-living in a variety of marine and estuarine habitats, including open rocky coasts, salt marshes, estuaries with seagrass beds, mudflats, and oyster and mussel-beds. No economic or ecological impacts are known for this species, but in its native range high levels of eutrophication can cause ‘green tide’ blooms of U. australis.

Ulva australis was first described from South Australia in 1854. However, genetic studies support the conclusion that it is synonymous with U. pertusa Kjellmann 1879, described from several locations in Japan. Genetic analyses indicate that the greatest genetic diversity of this alga is in the Northwest Pacific (Japan and South Korea), and that populations in Australia, New Zealand, California, Chile, and Europe were derived by multiple introductions (Hayden and Waaland 2004; Kraft et al. 2010; Couceiro et al. 2011; Kirkendale et al. 2013; Hanyuda et al. 2016). Some records from tropical regions (Malaysia, Philippines, India, Oman, Kenya) (Guiry and Guiry 2016) based on morphology, have not been confirmed by molecular methods, and may be misidentifications (Hanyuda et al. 2016). In North America, U. australis has been collected in British Columbia (Saunders and Kucera 2010; Wolf et al. 2012), Oregon, (Hansen, in Chapman et al. 2011), Southern California (Hayden and Waaland 2004), and Mexico (Aguilar-Rosas et al. 2008). It is likely that many of these introductions occurred long before the plants were identified by molecular methods. Ulva species are numerous, highly variable, and have few morphological features. They also have many features that make them prone to human transport, including the ability to grow unattached and drifting, attaching to or entangling with ships and artificial structures, and growing rapidly in eutrophic areas (Lopez et al. 2007).

Ulva australis was first collected on the West Coast of North America in 1978, near La Bufadora, Ensenada, Baja California, Mexico, and later identified as herbarium specimens. In 2006, additional specimens were found at four locations in Baja California and identified as U. pertusa (= australis) by molecular methods (Aguilar-Rosas et al. 2008). In 1999, specimens of U. australis were found in Bamfield and Nanaimo, on the east and west sides of Vancouver Island, British Columbia (Saunders and Kucera 2010). Ulva australis was also collected and identified in Coos Bay, Oregon in 2010 (Hansen, in Chapman et al. 2011). Specimens from British Columbia and Southern California all share haplotype H5, found on the Northeastern coast of Honshu, Japan (Hanyuda et al. 2016). Given the cryptic nature of this alga, its present range, actual date of introduction, and vector of introduction are all unknown. Plantings of Pacific Oysters (Crassostrea gigas), ballast water, and hull fouling are all possibilities.

On the East Coast, Ulva australis is known only from the Great Bay estuary, New Hampshire, but may be more widespread. A herbarium specimen, collected in 1966, was identified as this species. In 2008, U. australis was found at 4 of 11 sites sampled in the estuary, three rocky sites near the mouth of the estuary and one near marshes in the interior (Hofmann et al. 2010). As on the West Coast, this alga could be present and unrecognized in many East Coast estuaries.

Based on its earliest description, Ulva australis was introduced to Port Adelaide, South Australia before 1854, and is now widespread on the subtropical and temperate coasts of the continent, including Queensland. New South Wales, Victoria, South Australia, and Western Australia (Kraft et al. 2010; Kirkendale et al. 2012). In New Zealand, U. australis is widespread, both at sites with much and little human disturbance (Heesch et al. 2009). The date of introduction is unknown. In both Australia and New Zealand, the most common haplotype (H5) is one found on the Northeastern coast of Honshu, Japan (Hanyuda et al. 2016). This haplotype was also found in U. australis collected from the coast of central Chile (Hanyuda et al. 2016).

Green algae of the genus Ulva grow as a single flat blade, two cells thick, often divided into irregular wavy and crinkled lobes with holes in the blades ('Sea Lettuce'), or as a hollow tube (formerly placed in the genus Enteromorpha). Ulva spp. are usually bright green and often trap numerous air/oxygen bubbles. Ulva plants are often irregular and variable in shape, and are easily torn by waves, rocks, and grazers. They are often associated with sites of nutrient discharge and variable salinity. Many species of Ulva are recognized, and their taxonomy and biogeography are still being worked out. Molecular methods are needed for definite identification. For example, four species, including U. australis were identified from the Great Bay estuary, New Hampshire (Hofmann et al. 2010) in a molecular survey, while at least 12 species were found in a survey of the West Coast (Alaska-Mexico, Hayden and Waaland 2004).

General characteristics of Ulva australis include blades divided into 1-7 irregular leaf-like lobes with smooth margins and frequent perforations. The base of the blade is wedge-shaped and thick, with concentric wrinkles around the base. When not free-floating, the plants are attached to a substrate by numerous rhizomes. Plants range from 30 to 235 mm in size (occasionally up to 300 mm) and are dark green to yellow-green in color. Compared to U. lactuca, U. australis appears more irregular, and much more extensively perforated. Reproductive tissue forms a yellowish band on the edge of the blade. This description is based on: Woolcott and King 1999, Verlaque et al. 2002, Aguilar-Rosas et al. 2008, Hofmann et al. 2010, Kraft et al. 2010, and Couceiro et al. 2011.

Ulva australis was described from South Australia in 1854. Genetic studies support the conclusion that it is the senior synonym of U. pertusa Kjellman 1879, described from several locations in Japan (Couceiro et al. 2011; Guiry and Guiry 2016). However, the name U. pertusa is still used in some recent papers (e.g. Hanyuda et al. 2016; Hanyuda et al. 2018). Sauriau et al. (2021) found a variety of haplotyoes in Japan, upporting the synonymyof U., and in introduced populations around the world, suggesting multiple introductions in Europe and aorund the world, by shipping and tranfers of Pacific oysters (Magallana gigas).

Algae of the genus Ulva have two reproductive phases, which are morphologically similar, and produce either asexual, diploid zoospores with four flagella, or haploid gametes with two flagella (Bold and Wynne 1978). Spores are produced in a yellowish band around the edge of the thallus. The timing of spawning is variable, ranging from a 14-day to a 6-day cycle. A population in Kyushu, Japan spawns for several days before and after a neap tide (Okuda and Yamasaki 1987). Populations in Mediterranean France were fertile from May through October. Fertile cells in the reproductive band contain up to 32 biflagellated gametes (Verlaque et al. 2002). Ulva plants produce large numbers of propagules, which can swim and remain viable for 2-8 days (Santelices 1990; Lopez et al. 2007). When a pair of gametes unite, the flagellae disintegrate and the zygote secretes an adhesive substance (Bold and Wynne 1978). Under suitable conditions, fronds can grow very rapidly, up to 776% per week (Ohno 1977, cited by Verlaque 2002).

Specific impacts for U. australis in invaded waters have not been reported. However, blooms of Ulva spp. are widely recognized as signs of eutrophication and often attributed to U. lactuca, without formal identification (e.g. Gosner 1978; Van Patten 2006). In Japanese and Chinese waters, U. australis is responsible for 'green tides' in lagoons, producing bad odors and large die-offs with accumulations of dead algae contributing to the decline of seagrass beds (Zostera japonica) (Choi et al. 2011; Yamochi 2013; Zhang et al. 2014). Web of Science references indicate that U. australis (as U. pertusa) has been extensively studied as food for aquaculture organisms and for absorption of excess nutrients in culture systems.

Mao, Yunxiang; Kim, Jang Kyun; Wilson, Roderick; Yarish, Charles (2014) The appearance of Ulva laetevirens (Ulvophyceae, Chlorophyta) in the northeast Coast of the United States of America, Journal of the Ocean University of China 13: 865-870

Yamochi, Susumu (2013) Effects of desiccation and salinity on the outbreak of a green tide of Ulva pertusa in a created salt marsh along the coast of Osaka Bay, Japan, Estuarine, Coastal and Shelf Science 116: 21-28