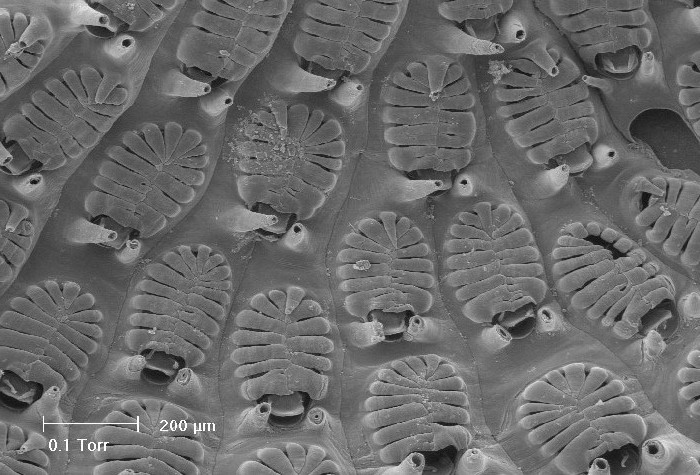 Aspidelectra melolontha is an encrusting bryozoan, which forms fanlike or branched lobes. It has a restricted native range that includes the North Sea, English Channel and adjacent estuaries. It has been introduced into San Francisco Bay, California and was first collected there in the 1970s. It is found attached to shells of oysters and mussels, and frequently found in low-salinity environments. No impacts have been reported for this species in its introduced range.

Aspidelectra melolontha has an apparently restricted native range in the North Sea, English Channel, and adjacent estuaries of Europe. It was described from the mouth of the Thames estuary, and is characteristically found on the inside of empty oyster and mussel shells, often in waters of reduced salinity (Winston 1977; Hayward and Ryland 1998; De Blauwe 2006; De Blauwe 2009). Other bryozoans of this genus are known from China, Africa, and Mauritius, but none from the Northeast Pacific (Bock 2011).

Bryozoans identified as Aspidelectra sp. were first collected in San Francisco Bay in 1977 (James T. Carlton, personal communication 2013). They were considered cryptogenic by Cohen and Carlton (1995), but should be regarded as introduced (James T. Carlton, personal communication 2008). Aspidelectra melolontha was identified from fouling plates on the Dumbarton Railway Bridge in South San Francisco Bay in the summer of 2000 (Ruiz et al., unpublished data). This species could have been transported by ballast water or fouling. The invasion of San Francisco Bay is surprising, given the limited native range in European waters, and the absence of other known invasions.

Aspidelectra melolontha is an encrusting bryozoan, forming fanlike or branched lobes, often on the inner surfaces of shells. Its autozooids are usually in regular linear series, branching frequently, resulting in fan-like lobes. The zooids are distinct, 0.2-0.4 X 0.2-0.3 mm in size, and separated by deep grooves. The lateral walls and the frontal membrane are lightly calcified and smooth. The frontal membrane, except for the operculum, is obscured by a shield of broad, flattened processes which arise from the edges of the opesia, and fuse along the midline of the autozooid. Two blunt spines occur at the boundary between each pair of autozooids (Description from Hayward and Ryland 1998).

Life History- Aspidelectra melolontha is an encrusting, lightly calcified bryozoan, composed of many individual zooids. The zooids feed by extending the ciliated tentacles of the lophophore as a funnel, creating a current, and driving food particles into their mouths. The food is guided along the tentacles and through the pharynx by the cilia. Larger food particles can be moved or captured by flicking or contracting the tentacles. The zooids are hermaphroditic, and produce large yolky eggs, which hatch into lecithotrophic larvae, which are planktonic for short periods (less than 1-2 days). Larvae are probably brooded inside the zooids, but the mode of development is unknown. Related genera (Electra, Conopeum, Membranipora) do have planktonic larvae (Hayward and Ryland 1998). Larvae settle on a substrate and metamorphose into the first zooid of a colony, an ancestrula (Barnes 1983).

Ecology- Aspidelectra melolontha is characteristically found attached to shells of oysters and mussels, and frequently from low-salinity environments (Winston 1977; Hayward and Ryland 1998).

No impacts have been reported for Aspidelectra melolontha in its introduced range.

Ryland, J.S., Hayward, P.J. (1977) British anascan bryozoans, Cheilostomata: Anasca. Keys and notes for the identification of the species., Synopses of the British Fauna 10: 1-187