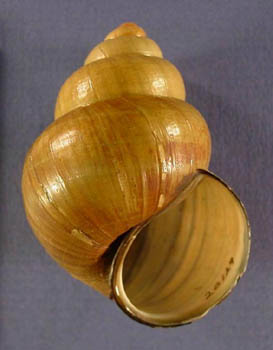 Heterogen japonica is commonly known as the Japanese Mystery Snail. It is a large freshwater snail found in lakes, ponds, or slow-flowing rivers with sandy to muddy substrates. Its native and introduced ranges are poorly known because of its taxonomic confusion with the Chinese Mystery Snail, Cipangopaludina chinensis. However, it is known to be native to Japan, Korea, and Taiwan. Introduced estuarine records are from the Connecticut River, Connecticut and the Potomac River, Virginia. This snail is abundant in some regions and may compete with native snails, but little is known about its ecological impacts.

The native and introduced ranges of Heterogen japonica are poorly known because of taxonomic confusion with Cipangopaludina chinensis. Heterogen japonica is native to Japan, Korea, and Taiwan, while a subspecies, C. c. maeta occurs in Japan (Clench and Fuller 1965; Jokinen 1982; Smith 2000; Hirano et al. 2015). Smith (2000) describes morphological features separating the two species and list records for shells matching the morphology of H. japonica. Records of this species appear to be more scattered than those of Cipangopaludina chinensis (Clench and Fuller 1965; Jokinen 1982; Smith 2000; Bury et al. 2007). It has however, been reported from 23 states (USGS Nonindigenous Aquatic Species Program 2022), but not from the western United States. Molecular studies (e.g., Fowler et al. 2022) may be needed to clarify the taxonomy and distribution of these large, conspicuous snails.

The earliest reported collection of Heterogen japonica on the East Coast to our knowledge is from Muddy River, Boston, Massachusetts in 1916 (MCZ Malacology 54908, Museum of Comparative Zoology 2013). Specimens of H. japonica have been identified from the Concord River, Massachusetts (Clench and Fuller 1965), a lake in the Hudson valley, New York (Jokinen 1992), and two lakes in the interior of Connecticut (Smith 2000). Heterogen japonica has been found, sometimes abundantly, in reservoirs in the interior of Virginia, North Carolina, and South Carolina (Dillon et al. 2006), and has been collected in ponds and reservoirs in Florida, Oklahoma, and Texas (Museum of Comparative Zoology 2013). Estuarine records are from the tidal fresh Connecticut River in Lyme, Connecticut (Smith 2000) and from the tidal Potomac River, in Arlington, Virginia in 2007 (Kraus 2007; USGS Nonindigenous Aquatic Species Program 2010). Previous records of Heterogen spp. from the Potomac have been identified as C. chinensis (Dundee 1974; US National Museum of Natural History collections). It is uncertain whether both species are present in the river. In recent years, shells resembling H. japonica (strongly conical) have been commonly seen floating or washed up on the shore of the Potomac River (Fofonoff, personal observations). Because of confusion between Heterogen japonica and Cipangopaludina chinensis, the dates of invasion of the two species are uncertain. Studies of shell collections and genetics of populations are desirable.

Heterogen japonica was reportedly introduced to Lake Erie in the 1940s as food for Channel Catfish (Ictalurus punctatus) by local fishermen (Wolfert and Hiltunen 1968). The extent of its range in the Great Lakes is uncertain, owing to confusion with C. chinensis (Mills et al. 1993).

Heterogen japonica is probably widely kept as an aquarium snail and released into urban waters, but is usually not distinguished from Cipangopaludina chinensis.

Heterogen japonica (Japanese Mystery Snail) is a large freshwater gastropod. The common name 'Mystery Snail' is applied to several snails of the family Viviparidae, which are kept in aquaria. Instead of laying egg masses, the snails brood their young. The release of the small, crawling snails can surprise aquarium-keepers,  The shell is dextrally coiled and somewhat globular, with a large aperture and sharply pointed spire. The umbilicus is small and partly covered by the parietal lip of the aperture. The aperture is large and oval. The operculum is brown with concentric growth lines. The shell is thin but strong. The adult shell has 6–7 whorls, which are strongly rounded and convex with clear sutures. The whorls are marked with transverse growth lines. The shell has a carina (keel) on the body whorl, which remains distinct as the shell grows. The spire forms a 50–55 degree angle. Shells may reach 60–75 mm in length. The color of the shell is light-brown to olive green, while the lip is black. Description from: Clench and Fuller 1965; Smith 2000; Jokinen 1992; Soes et al. 2011.

The Japanese Mystery Snail has been frequently confused with the Chinese Mystery Snail (Cipangopaludina chinensis) which is roughly similar in shape and size. Both species co-occur in Japan and both species have been introduced to North America. Some authors have considered C. chinensis (Chinese Mystery Snail) and H. japonica to be conspecific, possibly ecophenotypes, while others have treated them as distinct (Clench and Fuller 1965; Jokinen 1982; Jokinen 1992). Smith (2000) provided a detailed morphological analysis, showing that the two forms show consistent differences, even as embryos in the brood pouch. Differences in the size of the larval shell (protoconch) contribute to differences in the shape of the adult shell, and the 'pointiness' of the spire, which is blunter in C. chinensis and sharper in H. japonica.  Smith (2000) applied the genus name Bellamya to the Chinese and Japanese 'mystery snails'. In a detailed morphological study of the Japanese Mystery Snail, Van Bocxmaer and Strong (2016) restricted the genus Bellamya to African species, and reinstated the genus Cipangopaludina for the Asian snails. A molecular study of Japanese viviparids placed the Japanese snail in the genis Heterogen (Hirano et al. 2015).  Both species have been widely reported in North America, but the similarity of the two species make identifications uncertain. Ryan (2015) studied Mystery Snails in the Potomac River, and found many snails fitting the morphologies of both species with many intermediates in the Potomac River, and referred to the snails in the river as 'Bellamya spp.' Fowler et al. (2022) collected Mystery Snails in the tidal Potomac River, and found only H. japonica.

Cipangopaludina chinensis
This Asian freshwater snail (Chinese Mystery Snail) is very similar, but has a less acute spire, more rounded whorls, and has a 'malleated' (with shallow dents) shell surface. The species are frequently confused, and once were regarded by some biologists as conspecific, so their range is uncertain (Smith 2000).

Viviparus georgianus
This North American freshwater snail (Banded Mystery Snail) is native to the Mississippi Basin and Southeast US. It is marked with four chestnut-colored bands (Clench and Fuller 1965; Jokinen 1992).

Heterogen japonica has not been reported from brackish habitats to our knowledge. It is generally found in lakes, ponds, or slow-flowing rivers with sandy to muddy substrates, often in densely vegetated areas (Clench and Fuller 1965; Jokinen 1982; Jokinen 1992). These snails prefer water with high levels of calcium ions, usually above 10 ppm, and at pH levels above 7.0 (Jokinen 1982; Jokinen 1992). However, in New York State, H. japonica was found at a pH of 6.3 (Jokinen 1992). Foods include bottom detritus and benthic microalgae. Some viviparids have the ability to filter-feed using the gills, but in C. chinensis, planktonic algae does not make up a significant part of the diet (Jokinen 1982; Solomon et al. 2010). These snails are prone to great population booms and busts. Large numbers of floating and washed-up dead shells of H. japonica were found in Sandusky Bay, and in 2007–2011 in the tidal Potomac River (Fofonoff, personal observations). Predators include crayfishes (Olden et al. 2009), catfishes (Wolfert and Hiltunen 1968), and probably air-breathing predators such as gulls, raccoons, otters, etc.

Heterogen japonica (Japanese Mystery Snail) is a large, viviparous freshwater snail. It has separate sexes. Life history information is limited for H. japonica, but females tend to be larger than males (Wolfert and Hiltunen 1968). Its life history is presumed to be similar to that of Cipangopaludina chinensis , which can produce eggs in their first year, at about 40 mm, but most of the population's egg production took place in the 4th and 5th years (Stanczykowska et al. 1971). They can produce up to 102 embryos per brood (Crabbe 1929, cited by Jokinen 1982). Eggs are brooded in a uterus, and are hatched and released during the warmer months at about 5.5 mm shell length (Wolfert and Hiltunen 1968). A population in Sandusky Bay, Ohio, caught with 13 mm mesh, appeared to have two size classes, but animals smaller than 20 mm were not retained (Wolfert and Hiltunen 1968). These data suggest a longevity of at least 3 years.

Heterogen japonica (Japanese Mystery Snail) is an attractive and popular aquarium and fishpond snail, as well as a food item once sold in Asian markets in the United States (Jokinen 1982). This snail is abundant in some regions and may have had local impacts on fisheries, either as food or by interfering with fishing. In Sandusky Bay, Lake Erie, 'fishermen often made seine hauls containing '2 tons' of snails' (Mills et al. 1993). However, it has been regarded as a relatively benign invader, with little known about its ecological impacts. Large die-offs of these snails have cluttered the shores of the tidal Potomac and South Carolina reservoirs producing unpleasant sights and odors (South Carolina Department of Natural Resources 2007; Fofonoff, personal observations). Experiments with C. chinensis in mesocosms suggest that Asian mystery snails can affect native snail populations, through competition (Solomon et al. 2010).

Clench, William J. (1962) A catalogue of the Viviparidae of North America with notes on the distribution of Viviparus georgianus Lea, Occasional Papers on Mollusks, Museum of Comparative Zoolgy, Harvard University 2(27): 261-287