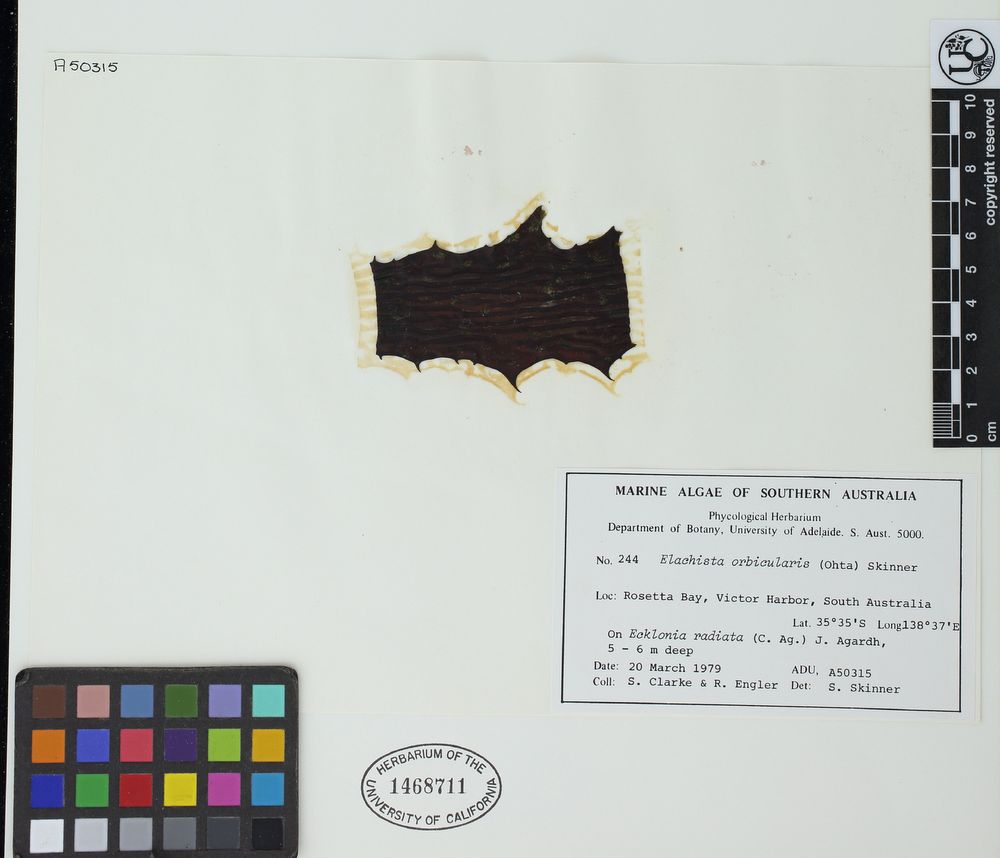 Elachista nigra is a tiny brown algae, which grows epiphytically as a cluster of filaments on kelp. Its native range extends from Northern Japan to South Korea. Introduced populations are known from the Channel Islands, California and Australia. Little is known about its invasion history (timing, kelp hosts, etc.), introduction vectors, or ecology. There are no economic or ecological impacts reported for this species.

During a study of seaweed epiphytes, Elachista nigra was discovered on dried herbarium specimens of the native kelp Eisenia arborea from Wilson's Cove on San Clemente Island, in the Channel Islands of California, collected in 1984 (Kitayama et al. 2005; Miller et al. 2011). Since no introduced kelps were known from California at that time, and few Pacific Oyster plantings were made in Southern California, the mechanism of introduction is unclear.

In 1976-1980, Elachista nigra was collected at several sites near Adelaide, South Australia, on the native kelp Ecklonia radiata. It was later found on Rottnest Island, Western Australia in 1979, and Garie Beach, New South Wales in 1983. It is considered a probable introduction to Australia (Womersley 1987). As in California, it was not associated with an introduced kelp, and arrived decades before the discovery of the Japanese kelp Undaria pinnatifida in Australia.

Elachista nigra grows on kelp species, including the genera Eisenia, Ecklonia, Laminaria, and Undaria. Its thallus consists of a hemispherical cushion, consisting of basal porstrate filaments, bearing smaller erect filaments. The thallae are attached to the kelp surface by peg-shaped protrusions from the porstrate filaments which extend from the cushion. The filaments have a constricted base and a tapering tip. The filaments are 5-10 µm in diameter and may reach 0.5-4.0 mm long. In older thalli, the filaments are dichotomously branched. The colorless filaments develop into unilocular sporangia, a unicellular string of spore-producing cells. The thalli have the appearance of small-fuzzy patches on the blade of the kelp. This description is based on Skinner 1983, Uwai et al. 2002, and Kitayama et al. 2005.

Elachista nigra grows on kelps of the genera Eisenia, Ecklonia, Laminaria, and Undaria (Skinner 1983; Uwai et al. 2002; Kitayama et al. 2005). Development is presumed to be direct, with fused gametes developing into colonies similar to the parent form (Womersley 1987). However, in the congener Elachista fucicola, life history and reproductive mode depends on environmental conditions, including temperature, salinity, and light and the plant can grow either as a diploid 'macrothallus', producing plurispores, or a haploid 'microthallus'. When subjected to warmer temperatures and longer daylengths, the microthalli bud off diploid macrothalli (Bold and Wynne 1978). It is not known whether E. nigra has the same type of environmentally-induced heteromorphic life-cycle.

Little is known of the environmental requirements and ecology of Elachista nigra. Its environmental tolerances are presumably similar to those of its host kelps. The extent to which E. nigra affects its host plant or is grazed by invertebrates is unknown.

There are no known economic or ecological impacts of Elachista nigra.